We present a process algebra aimed at describing interactions that are multiparty, i.e. that may involve more than two processes and that are open, i.e. the number of the processes they involve is not fixed or known a priori. Here we focus on the theory of a core version of a process calculus, without message passing, called Core Network Algebra (CNA). In CNA communication actions are given not in terms of channels but in terms of chains of links that record the source and the target ends of each hop of interactions. The operational semantics of our calculus mildly extends the one of CCS. The abstract semantics is given in the style of bisimulation but requires some ingenuity. Remarkably, the abstract semantics is a congruence for all operators of CNA and also with respect to substitutions, which is not the case for strong bisimilarity in CCS. As a motivating and running example, we illustrate the model of a simple software defined network infrastructure. 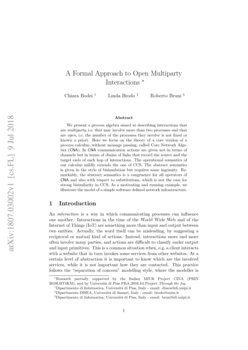 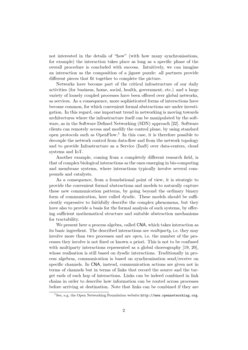 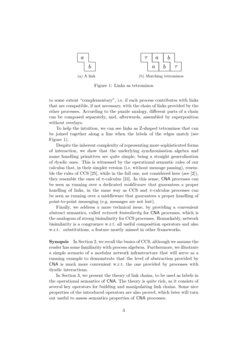 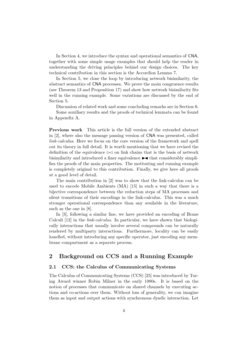 We introduce operational semantics into games. And based on the operatio...
Yong Wang, et al. ∙

A Behavioural Theory for Interactions in Collective-Adaptive Systems

On the characterization of models of H* : The operational aspect

We give a characterization, with respect to a large class of models of u...
Flavien Breuvart, et al. ∙

is a way in which communicating processes can influence one another. Interactions in the time of the World Wide Web and of the Internet of Things (IoT) are something more than input and output between two entities. Actually, the word itself can be misleading, by suggesting a reciprocal or mutual kind of actions. Instead, interactions more and more often involve many parties, and actions are difficult to classify under output and input primitives. This is a common situation when, e.g. a client interacts with a website that in turn invokes some services from other websites. At a certain level of abstraction it is important to know which are the involved services, while it is not important how they are contacted. This practice follows the “separation of concern” modelling style, where the modeller is not interested in the details of “how” (with how many synchronisations, for example) the interaction takes place as long as a specific phase of the overall procedure is concluded with success. Intuitively, we can imagine an interaction as the composition of a jigsaw puzzle: all partners provide different pieces that fit together to complete the picture.

Networks have become part of the critical infrastructure of our daily activities (for business, home, social, health, government, etc.) and a large variety of loosely coupled processes have been offered over global networks, as services. As a consequence, more sophisticated forms of interactions have become common, for which convenient formal abstractions are under investigation. In this regard, one important trend in networking is moving towards architectures where the infrastructure itself can be manipulated by the software, as in the Software Defined Networking (SDN) approach DBLP:journals/pieee/KreutzRVRAU15 . Software clients can remotely access and modify the control plane, by using standard open protocols such as OpenFlow.222See, e.g. the Open Networking Foundation website http://www.opennetworking.org. In this case, it is therefore possible to decouple the network control from data-flow and from the network topology and to provide Infrastructure as a Service (IaaS) over data-centers, cloud systems and IoT.

Another example, coming from a completely different research field, is that of complex biological interactions as the ones emerging in bio-computing and membrane systems, where interactions typically involve several compounds and catalysts.

As a consequence, from a foundational point of view, it is strategic to provide the convenient formal abstractions and models to naturally capture these new communication patterns, by going beyond the ordinary binary form of communication, here called dyadic. These models should be sufficiently expressive to faithfully describe the complex phenomena, but they have also to provide a basis for the formal analysis of such systems, by offering sufficient mathematical structure and suitable abstraction mechanisms for tractability.

We present here a process algebra, called CNA, which takes interaction as its basic ingredient. The described interactions are multiparty, i.e. they may involve more than two processes and are open, i.e. the number of the processes they involve is not fixed or known a priori. This is not to be confused with multiparty interactions represented as a global choreography DBLP:conf/popl/HondaYC08 ; DBLP:journals/csur/HuttelLVCCDMPRT16 , whose realisation is still based on dyadic interactions. Traditionally in process algebras, communication is based on synchronisation send/receive on specific channels. In CNA, instead, communication actions are given not in terms of channels but in terms of links that record the source and the target ends of each hop of interactions. Links can be indeed combined in link chains in order to describe how information can be routed across processes before arriving at destination. Note that links can be combined if they are to some extent “complementary”, i.e. if each process contributes with links that are compatible, if not necessary, with the chain of links provided by the other processes. According to the puzzle analogy, different parts of a chain can be composed separately, and, afterwards, assembled by superposition without overlays.

To help the intuition, we can see links as Z-shaped tetrominos that can be joined together along a line when the labels of the edges match (see Figure 1).

In Section 2, we recall the basics of CCS, although we assume the reader has some familiarity with process algebras. Furthermore, we illustrate a simple scenario of a modular network infrastructure that will serve as a running example to demonstrate that the level of abstraction provided by CNA is much more convenient w.r.t. the one provided by processes with dyadic interactions.

In Section 3, we present the theory of link chains, to be used as labels in the operational semantics of CNA. The theory is quite rich, as it consists of several key operators for building and manipulating link chains. Some nice properties of the introduced operators are also proved, which later will turn out useful to assess semantics properties of CNA processes.

In Section 4, we introduce the syntax and operational semantics of CNA, together with some simple usage examples that should help the reader in understanding the driving principles behind our design choices. The key technical contribution in this section is the Accordion Lemma 7.

In Section 5, we close the loop by introducing network bisimilarity, the abstract semantics of CNA processes. We prove the main congruence results (see Theorem 13 and Proposition 17) and show how network bisimilarity fits well in the running example. Some variations are discussed by the end of Section 5.

Discussion of related work and some concluding remarks are in Section 6.

Some auxiliary results and the proofs of technical lemmata can be found in A.

This article is the full version of the extended abstract in BodeiBB12 , where also the message passing version of CNA was presented, called link-calculus. Here we focus on the core version of the framework and spell out its theory in full detail. It is worth mentioning that we have revised the definition of the equivalence ⊳\joinrel⊲ on link chains that is the basis of network bisimilarity and introduced a finer equivalence ▶\joinrel◀ that considerably simplifies the proofs of the main properties. The motivating and running example is completely original to this contribution. Finally, we give here all proofs at a good level of detail.

The main contribution in BodeiBB12 was to show that the link-calculus can be used to encode Mobile Ambients (MA) GC03 in such a way that there is a bijective correspondence between the reduction steps of MA processes and silent transitions of their encodings in the link-calculus. This was a much stronger operational correspondence than any available in the literature, such as the ones in Brodo11 ; B16 .

In BodeiBBC14 , following a similar line, we have provided an encoding of Brane Calculi C05 in the link-calculus. In particular, we have shown that biologically interactions that usually involve several compounds can be naturally rendered by multiparty interactions. Furthermore, locality can be easily handled, without introducing any specific operator, just encoding any membrane compartment as a separate process.

2 Background on CCS and a Running Example

2.1 CCS: the Calculus of Communicating Systems

The Calculus of Communicating Systems (CCS) DBLP:books/daglib/0067019 was introduced by Turing Award winner Robin Milner in the early 1980s. It is based on the notion of processes that communicate on shared channels by executing actions and co-actions over them. Without loss of generality, we can imagine them as input and output actions with synchronous dyadic interaction. Let C={a,b,...} be the set of channels and, by coercion, input actions. We denote by ¯¯¯C={¯¯¯a,¯¯b,...} the set of co-actions (i.e. output actions), with C∩¯¯¯C=∅ and let O=C∪¯¯¯C denote the set of observable actions ranged over by λ. We extend the bar-notation to observable actions, by letting ¯¯¯¯¯¯λ=λ. We also fix a distinguished silent action τ∉O and let μ∈O∪{τ} denote a generic action. A channel relabelling is a function ϕ:C→C. It is extended to generic actions by letting ϕ(τ)=τ and ϕ(¯¯¯λ)=¯¯¯¯¯¯¯¯¯¯¯ϕ(λ) for any observable action λ. It is called a renaming when it is bijective.

A CCS process is then a term generated by the following grammar:

where ϕ is a channel relabelling function and A is any constant drawn from a set Δ of possibly recursive definitions of the form A≜p.

Roughly the process 0 is the inactive process that cannot perform any action. The action prefixed process μ.p can execute the action μ and then behaves as p. The operator + introduces nondeterminism: the composed process p+q can behave as p or as q, but once it performs an action as p the option q is discarded, and vice versa. The parallel composition of two processes, written p|q, allows p and q to interleave their actions or to interact by performing complementary actions a and ¯¯¯a: if this is the case, the synchronisation is represented as a silent action τ and the channel where it takes places is not recorded. The restricted process (νa)p can perform all actions that p can perform, except for actions a and ¯¯¯a, which are blocked. The relabelled process p[ϕ] can perform all actions that p can perform, but they are relabelled according to ϕ, i.e.  if p can do an action μ then p[ϕ] can do ϕ(μ). Relabelling is very useful for reusing process components in different parts of the system just by changing the set of channels on which they operate. Finally, the constant A behaves as p if (A≜p)∈Δ.