A forgotten Theorem of Schoenberg on one-sided integral averages

Let f:R→R be a function for which we want to take local averages. Assuming we cannot look into the future, the 'average' at time t can only use f(s) for s ≤ t. A natural way to do so is via a weight ϕ and g(t) = ∫_0^∞f(t-s) ϕ(s) ds. We would like that (1) constant functions, f(t) ≡const, are mapped to themselves and (2) ϕ to be monotonically decreasing (the more recent past should weigh more heavily than the distant past). Moreover, we want that (3) if f(t) crosses a certain threshold n times, then g(t) should not cross the same threshold more than n times (if f(t) is the outside wind speed and crosses the Tornado threshold at two points in time, we would like the averaged wind speed to cross the Tornado threshold at most twice). A Theorem implicit in the work of Schonberg is that these three conditions characterize a unique weight that is given by the exponential distribution ϕ(s) = λ^-1 e^-λ s for some λ > 0. 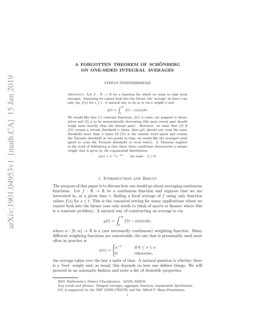 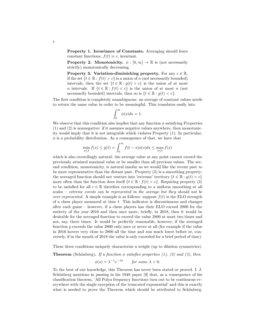 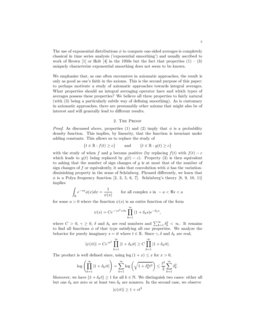 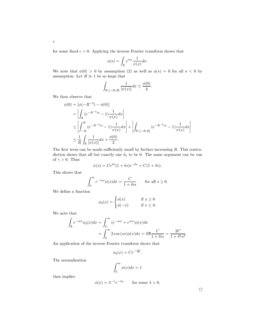 In this article we present an approach that enables joint wind speed and...
Florian Ziel, et al. ∙

Why Do We Need Foundations for Modelling Uncertainties?

The purpose of this paper is to discuss how one would go about averaging continuous functions. Let f:R→R be a continuous function and suppose that we are interested in, at a given time t, finding a local average of f using only function values f(s) for s≤t. This is the canonical setting for many applications where we cannot look into the future (one only needs to think of sports or finance where this is a constant problem). A natural way of constructing an average is via

the average taken over the last a units of time. A natural question is whether there is a ’best’ weight and, as usual, this depends on how one defines things. We will proceed in an axiomatic fashion and state a list of desirable properties.

The first condition is completely unambiguous: an average of constant values needs to return the same value in order to be meaningful. This translates easily into

We observe that this condition also implies that any function ϕ satisfying Properties (1) and (2) is nonnegative: if it assumes negative values anywhere, then monotonicity would imply that it is not integrable which violates Property (1). In particular, ϕ

is a probability distribution. As a consequence of that, we have that

which is also exceedingly natural: the average value at any point cannot exceed the previously attained maximal value or be smaller than all previous values. The second condition, monotonicity, is natural insofar as we would like the recent past to be more representative than the distant past. Property (3) is a smoothing property: the averaged function should not venture into ’extreme’ territory {t∈R:g(t)>c} more often than the function does itself {t∈R:f(t)>c}. Requiring property (3) to be satisfied for all c∈R therefore corresponding to a uniform smoothing at all scales – extreme events can be represented in the average but they should not be over-represented. A simple example is as follows: suppose f(t) is the ELO strength of a chess player measured at time t. This indicator is discontinuous and changes after each game – however, if a chess players has their ELO exceed 2800 for the entirety of the year 2016 and then once more, briefly, in 2018, then it would be desirable for the averaged function to exceed the value 2800 at most two times and not, say, three times. It would be perfectly reasonable, however, if the averaged function g exceeds the value 2800 only once or never at all (for example if the value in 2016 hovers very close to 2800 all the time and was much lower before or, conversely, if in the month of 2018 the value is only exceeded for a brief period of time).

These three conditions uniquely characterize a weight (up to dilation symmetries).

To the best of our knowledge, this Theorem has never been stated or proved. I. J. Schönberg mentions in passing in his 1948 paper [9] that, as a consequence of his classification theorem, ’All Polya frequency functions turn out to be continuous everywhere with the single exception of the truncated exponential’ and this is exactly what is needed to prove the Theorem which should be attributed to Schönberg. The use of exponential distributions ϕ to compute one-sided averages is completely classical in time series analysis (’exponential smoothing’) and usually ascribed to work of Brown [1] or Holt [4] in the 1950s but the fact that properties (1) – (3) uniquely characterize exponential smoothing does not seem to be known.

We emphasize that, as one often encounters in axiomatic approaches, the result is only as good as one’s faith in the axioms. This is the second purpose of this paper: to perhaps motivate a study of axiomatic approaches towards integral averages. What properties should an integral averaging operator have and which types of averages possess these properties? We believe all three properties to fairly natural (with (3) being a particularly subtle way of defining smoothing). As is customary in axiomatic approaches, there are presumably other axioms that might also be of interest and will generally lead to different results.

As discussed above, properties (1) and (2) imply that ϕ

is a probability density function. This implies, by linearity, that the function is invariant under adding constants. This allows us to replace the study of

with the study of when f and g become positive (by replacing f(t) with f(t)−c which leads to g(t) being replaced by g(t)−c). Property (3) is then equivalent to asking that the number of sign changes of g is at most that of the number of sign changes of f or equivalently, it asks that convolution with ϕ has the variation-diminishing property in the sense of Schönberg. Phrased differently, we learn that ϕ is a Polya frequency function [2, 3, 5, 6, 7]. Schönberg’s theory [8, 9, 10, 11] implies

where C>0, γ≥0, δ and δk are real numbers and ∑∞k=1δ2k<∞. It remains to find all functions ϕ of that type satisfying all our properties. We analyze the behavior for purely imaginary s=it where t∈R. Since γ,δ and δk are real,

The product is well defined since, using log(1+x)≤x for x>0,

Moreover, we have ∥1+δkt∥≥1 for all k∈N. We distinguish two cases: either all but one δk are zero or at least two δk are nonzero. In the second case, we observe

for some fixed c>0

We then observe that

The first term can be made sufficiently small by further increasing R. This contradiction shows that all but exactly one δk to be 0. The same argument can be run of γ>0. Thus

We define a function

An application of the inverse Fourier transform shows that