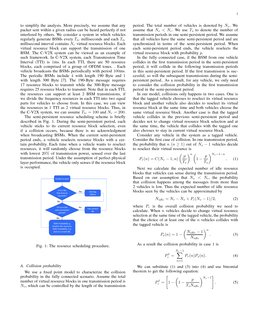 Safety related applications of future connected vehicles are based on the periodic exchange of vehicular status, such as Basic Safety Messages (BSMs) in the DSRC standard. Such BSMs are broadcast periodically and require high reliability and low latency communication. The automotive industry standardized a WiFi extension called IEEE 802.11p (also known as DSRC) to address the communication requirements of safety related applications[9]. A recent Notice of Proposed Rule Making (NPRM) issued by the National Highway Transportation Safety Authority (NHTSA) has proposed IEEE 802.11p (DSRC) for the technology to deliver Safety Applications between vehicles in the ITS (5.9 GHz) band – specifically channel 172. The NPRM mentions possibility of using alternative technologies in this band.

A leading alternative technology is Cellular V2X (C-V2X), which is based on leveraging and enhancing existing cellular-based LTE features and network elements to facilitate the exchange of V2X messages between vehicles. C-V2X is initially defined as LTE V2X. In 3GPP Release 14, it is designed to operate in several modes: V2V, V2I, V2N and V2P[1]. The V2V mode overcomes the limitation of the traditional LTE architecture by introducing a new Sidelink alongside the Downlink and Uplink, which allows vehicles to transmit directly to each other. In 3GPP Release 14, two new modes (modes 3 and 4) specifically designed for V2V communications are introduced. Modes 3 and 4 differ on how they allocate the radio resources. Resources are allocated by the cellular network under Mode 3, while Mode 4 does not require cellular coverage. Vehicles autonomously select their radio resources using a distributed scheduling scheme in Mode 4[7].

In both DSRC and C-V2X systems, the MAC protocol plays a vital role to guarantee a timely communication of BSMs. In DSRC, IEEE 802.11 distributed coordination function MAC protocol has been adopted by the IEEE 802.11p standard for DSRC applications[5]. The MAC performance of DSRC has been well studied. The authors in [8] developed an analytical model to determine the probability of packet collision in the broadcast scenario. The model in [2] attempted to capture the characteristics of the DSRC safety communications, where broadcasting takes place in an unsaturated network with hidden terminals. In [6], the authors provided an accurate analytical model for the MAC protocol of DSRC in unsaturated broadcast networks both with and without hidden terminals. However for the MAC protocol of C-V2X, there is little literature providing analytical models to evaluate the performance. In [3], the authors used a case study to evaluate the performance of C-V2X safety communication. Authors in [4] proposed an analytical model for C-V2X transmission mode 2 but does not address the case for transmission mode 4, where vehicles choose their resource block in a distributed way.

In this paper, we mainly focus on the performance analysis of a distributed and semi-persistent resource scheduling scheme which is a simplified version of transmission mode 4 in C-V2X system. Under the assumption of perfect PHY performance, we develop an analytical model to characterize the scheduling scheme. We then use a fixed point method to approximate the collision probability and average delay in a fully connected case. We also consider the hidden terminal issue in partially connected cases. In addition a Monte Carlo simulator is used to verify the results obtained in the analytical model and to conduct more exploration of the system. Furthermore, we investigate a flexible resource block selection scheme, with which average delay can be lowered significantly with a slight compromise on collision probability.

In this section, we provide the analytical model for the semi-persistent resource scheduling scheme similar to C-V2X transmission Mode 4. We assume perfect PHY-layer performance to simplify the analysis. More precisely, we assume that any packet sent within a given radius can be heard perfectly if not interfered by others. We consider a system in which vehicles regularly generate BSMs every Ttr milliseconds and each Ttr millisecond interval contains Nr virtual resource blocks. Each virtual resource block can support the transmission of one BSM. The C-V2X system can be viewed as an example of such framework. In C-V2X system, each Transmission Time Interval (TTI) is 1ms. In each TTI, there are 50 resource blocks, each comprised of a group of OFDM tones. . Each vehicle broadcasts the BSMs periodically with period 100ms. The periodic BSMs include 4 with length 190 Byte and 1 with length 300 Byte[7]. The 190-Byte message requires 17 resource blocks to transmit while the 300-Byte message requires 25 resource blocks to transmit. Note that in each TTI, the resources can support at least 2 BSM transmissions, if we divide the frequency resources in each TTI into two equal parts for vehicles to choose from. In this case, we can view the resources in 1 TTI as 2 virtual resource blocks. Thus, in the C-V2X system, we can assume Ttr=100 and Nr=200.

Consider any vehicle in the system as a tagged vehicle. Consider the first case of collision. In one transmission period, the probability that n (n≥1) out of Nv−1 vehicles decide to reselect their virtual resource is

As a result the collision probability in case 1 is

We can substitute (1) and (3) into (4) and use binomial theorem to get the following equation:

For case 2, it is difficult to identify the exact number of transmissions that collide with the tagged one. But as we stated before for the expected number of idle resource blocks, most collision happens between two vehicles. As a result, the collision probability in case 2 can be approximated as

By substituting PIc and PIIc into (7), we can find the following fixed point problem

where Nidle is defined in (2) and depends on Pc. .

Delay is defined as the time gap between currently received BSM and the BSM that the vehicle should have received since vehicle’s last received BSM. For semi-persistent scheduling, delay can be caused by the initial delay and collision, i.e.

The initial delay is caused by the random selection of the resource block. After the channel monitoring period (under our assumption equal to the transmission period of 100ms) the vehicle selects a virtual resource block uniformly randomly in the next transmission period. We will observe later that the choice of the selection window has interesting implications on the latency-collision probability trade-off. This initial delay can be viewed as a uniform random variable in

[0,Ttr], where Ttr is the transmission period in ms. Thus we have

To simplify the model, we assume that combined collision slot happens independently from slot to slot.. The collision delay then follows a geometric distribution and as a result the expected delay is given by

When not all the vehicles can hear each other, i.e., in a partially connected topology, we need to consider the hidden terminal issue. We assume that the vehicles are uniformly distributed and the vehicle density on the high way is denoted by

Note that the collision probability is that seen from the transmitter side. As long as one collision happens while other vehicles received the message, it is still considered as a collision. Another way to think of collisions is from the receiver side, which we refer to as the packet error ratio. Packet error ratio is defined as the following.

where Psingle is defined in (14) and Pc is the collision probability calculated in the fully connected case.

We conduct Monte Carlo simulation under static vehicle distribution to study the accuracy of the analytical results we derived in the previous section. In each experiment, we assume that the number of vehicles in the system is fixed and the location of vehicles remains the same. The location of each vehicle is determined by a uniformly distributed random variable with the maximum value to be the length of road. The transmission time period we use in the experiment is Ttr=100ms, i.e., every vehicle generates a BSM every 100ms. Each experiment runs for 2000 seconds and the same experiment is conducted 10 times to average the results.

We also verify the analytical results in the partially connected case. In the simulation, we set the parameter Ts=10, p=0.2 and transmission range R=500m. The results of collision probability and packet error ratio and average delay are shown in Fig. 4. It can be seen that the analytical results and simulation results match quite well with each other especially when traffic load is low. When traffic load is high, there is some difference but the results are still close. A main reason for the difference is that our calculation decouples the impact of hidden terminals and the resource scheduling scheme. When vehicle density is relatively high, these two factors may impact each other, which leads to the difference.

As is seen in previous figures, even though the traffic is light in the system, average delay is still around 50ms, due to our assumption that a virtual resource block is chosen uniformly within the whole subsequent transmission period. Since vehicles can only transmit the packet after the packet arrives, the initial delay Dini in (9) is a major part in the average delay. However it is possible to reduce this by allowing vehicles to choose the closest idle virtual resource block in the current transmission period. With such a selection scheme, we may expect slightly more collisions, because it is more likely for vehicles to select the same virtual resource block. However average delay can be shortened.

We conduct Monte Carlo simulation for this delay-optimized resource scheduling scheme in both fully and partially connected cases. Results are shown in Fig. 6 and Fig. 7. We can see that in both cases, with very small sacrifice on packet error ratio, delay is shortened significantly.

In this paper, we focused on the performance analysis of a semi-persitent resource scheduling scheme which represents a simplified version of C-V2X system transmission Mode 4. We built an analytical model and used a fixed point method to analyze the collision probability and average delay in both fully connected and partially connected cases. In addition we used Monte Carlo simulation to verify the results obtained in the analytical model. Results showed that our analytical model can give a good estimation of the collision probability and average delay. We also investigated a delay-optimized resource selection scheme with which average delay can be shortened significantly.

In our work, we assume a perfect PHY performance, introducing RF modeling is a possible extension. Also we only investigated the performance of C-V2X system under a static setting, i.e., all vehicles are assumed to be static. It would be interesting to look at the transients when vehicles moves between areas with different traffic. Furthermore, it is possible to compare the performance with DSRC system to find the advantages and disadvantages of these two technologies.