A modification of the standard Boris algorithm, called filtered Boris algorithm, is proposed for the numerical integration of the equations of motion of charged particles in a strong non-uniform magnetic field in the asymptotic scaling known as maximal ordering. With an appropriate choice of filters, second-order error bounds in the position and in the parallel velocity, and first-order error bounds in the normal velocity are obtained with respect to the scaling parameter. The proof compares the modulated Fourier expansions of the exact and the numerical solutions. Numerical experiments illustrate the error behaviour of the filtered Boris algorithm. 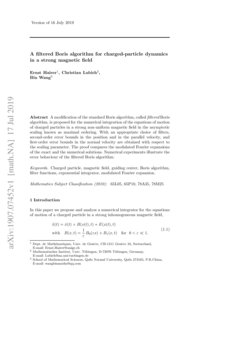 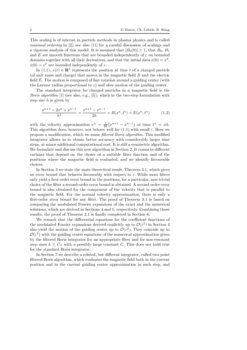 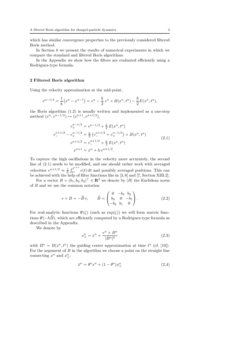 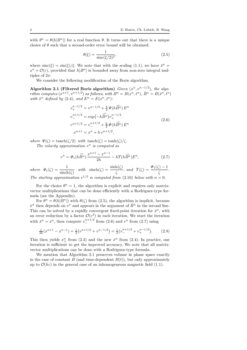 In this work, we consider the error estimates of some splitting schemes ...
Bin Wang, et al. ∙

The aim of this paper is to formulate and analyze numerical discretizati...
Bin Wang, et al. ∙

In this paper we propose and analyse a numerical integrator for the equations of motion of a charged particle in a strong inhomogeneous magnetic field,

This scaling is of interest in particle methods in plasma physics and is called maximal ordering in brizard07fon ; see also possanner18gfv for a careful discussion of scalings and a rigorous analysis of this model. It is assumed that |B0(0)|≥1, that B0, B1 and E are smooth functions that are bounded independently of ε on bounded domains together with all their derivatives, and that the initial data x(0)=x0, ˙x(0)=v0 are bounded independently of ε.

In (1), x(t)∈R3 represents the position at time t of a charged particle (of unit mass and charge) that moves in the magnetic field B and the electric field E. The motion is composed of fast rotation around a guiding center (with the Larmor radius proportional to ε) and slow motion of the guiding center.

The standard integrator for charged particles in a magnetic field is the Boris algorithm boris70rps (see also, e.g., hairer18ebo ), which in the two-step formulation with step size h is given by

with the velocity approximation vn=12h(xn+1−xn−1) at time tn=nh. This algorithm does, however, not behave well for (1) with small ε. Here we propose a modification, which we name filtered Boris algorithm. This modified integrator allows us to obtain better accuracy with considerably larger time steps, at minor additional computational cost. It is still a symmetric algorithm. We formulate and discuss this new algorithm in Section 2. It comes in different variants that depend on the choice of a suitable filter function and of the positions where the magnetic field is evaluated, and we identify favourable choices.

We remark that the differential equations for the coefficient functions of the modulated Fourier expansions derived explicitly up to O(ε2) in Section 4 also yield the motion of the guiding center up to O(ε2). They coincide up to O(ε2) with the guiding center equations of the numerical approximation given by the filtered Boris integrator for an appropriate filter and for non-resonant step sizes h≤Cε with a possibly large constant C. This does not hold true for the standard Boris integrator.

In Section 7 we describe a related, but different integrator, called two-point filtered Boris algorithm, which evaluates the magnetic field both in the current position and in the current guiding center approximation in each step, and which has similar convergence properties to the previously considered filtered Boris method.

In Section 8 we present the results of numerical experiments in which we compare the standard and filtered Boris algorithms.

In the Appendix we show how the filters are evaluated efficiently using a Rodriguez-type formula.

Using the velocity approximation at the mid-point,

To capture the high oscillations in the velocity more accurately, the second line of (3) needs to be modified, and one should rather work with averaged velocities vn+1/2≈1h∫tn+1tnv(t)dt and possibly averaged positions. This can be achieved with the help of filter functions like in garcia-archilla99lmf ; hochbruck99agm and (hairer06gni, , Section XIII.2).

For real-analytic functions Ψ(ζ) (such as exp(ζ)) we will form matrix functions Ψ(−hˆB), which are efficiently computed by a Rodriguez-type formula as described in the Appendix.

with Bn=B(xn,tn) the guiding center approximation at time tn (cf. northrop63tam ). For the argument of B in the algorithm we choose a point on the straight line connecting xn and xn⊙:

with θn=θ(h|Bn|) for a real function θ. It turns out that there is a unique choice of θ such that a second-order error bound will be obtained:

where sinc(ξ)=sin(ξ)/ξ. We note that with the scaling (1), we have ¯xn=xn+O(ε), provided that h|Bn| is bounded away from non-zero integral multiples of 2π.

We consider the following modification of the Boris algorithm.

The velocity approximation vn is computed as

For the choice θn=1, the algorithm is explicit and requires only matrix-vector multiplications that can be done efficiently with a Rodriguez-type formula (see the Appendix).

For θn=θ(h|Bn|) with θ(ζ) from (7), the algorithm is implicit, because ¯xn then depends on vn and appears in the argument of ¯Bn in the second line. This can be solved by a rapidly convergent fixed-point iteration for ¯xn, with an error reduction by a factor O(ε2) in each iteration. We start the iteration with ¯xn=xn, then compute vn+1/2− from (8) and vn from (9) using

This then yields xn⊙ from (5) and the new ¯xn from (6). In practice, one iteration is sufficient to get the improved accuracy. We note that all matrix-vector multiplications can be done with a Rodriguez-type formula.

We mention that Algorithm 2.1 preserves volume in phase space exactly in the case of constant B (and time-dependent B(t)), but only approximately up to O(hε) in the general case of an inhomogeneous magnetic field (1).

as is readily obtained by taking two consecutive steps and using (10). This formulation is the basis of our theoretical analysis.

Starting value. The starting value v1/2 is chosen such that formulas (8)-(9) also hold for n=0. We find, for arbitrary n, that

The method is symmetric in the sense that exchanging n↔n+1 and h↔−h gives the same formulas.

Since we have chosen Ψ(ζ)=tanch(ζ/2), the method is also exact for constant B and E. This is seen as follows: For constant B, the variation-of-constants formula for the system ˙x=v,  ˙v=x×B+E(x) reads, in view of (15),

3 Statement of the main result

Our main theoretical result in this paper is the following error bound for the filtered Boris algorithm. Here we denote, for the exact velocity v(t)=˙x(t),

and similarly for the numerical velocity vn,

We then have the following result.

If in the filtered Boris algorithm,

For a different choice of the functions θ, Ψ and Υ, the error bounds are not better than O(ε) for general problems (1). The constants in the O-notation are independent of ε and h and n with 0≤tn=nh≤T, but depend on T, on the velocity bound M and the constants c and C, and on bounds of derivatives of B0, B1 and E in a neighbourhood of the set K.

We remark that in view of the error bounds, the non-resonance condition might be required along the numerical solution xn instead of the exact solution x(t) as in (17).

The proof also shows that the choice ¯xn=xn is sufficient for order 2 if the magnetic field satisfies, for all z∈C3 and x∈K and all times t,

We write the solution of (1) as a modulated Fourier expansion

with coefficient functions zk(t) for which all time derivatives are bounded independently of ε, where ˙ϕ(t)/ε=∣∣B(z0(t),t)∣∣, and z0(t) describes the motion of the guiding center. Such a formal expansion has first been considered in kruskal58tgo

12|˙x×B(x)|2/|B(x)|3). It has been used for a rigorous proof of the long-time near-conservation of the magnetic moment in hairer19lta , where this approach was extended to the numerical solution of a variational integrator, for which near-conservation of the magnetic moment and of the energy is rigorously proved over long times that cover arbitrary negative powers of ε.

. We denote the normalized eigenvectors by

be the orthogonal projections onto the eigenspaces. Furthermore, we write the coefficient functions of (

The following result is a variant of Theorem 4.1 in hairer19lta , adapted to the present case of a strong magnetic field of the form (1). Note that B in this paper corresponds to B/ε in hairer19lta .

Let x(t) be a solution of (1) with bounded initial velocity (16) that stays in a compact set K for 0≤t≤T. For an arbitrary truncation index N≥1 we then have

(b) The remainder term and its derivative are bounded by

where we use the notation ˙Pj(z0,t)=ddtPj(z0(t),t) and similar for ¨Pj(z0,t). All other coefficient functions zkj are given by algebraic expressions depending on z0,˙z00,z11,z−1−1.

(d) Assuming ϕ(0)=0, initial values for the differential equations of item (c) are given by

The constants symbolised by the O-notation are independent of ε and t with 0≤t≤T, but they depend on N, on the velocity bound M in (16), on bounds of derivatives of B and E, and on T.

(a) and (b): Compared to Theorem 4.1 in hairer19lta , where a more general strong magnetic field is considered, the time interval of validity of the modulated Fourier expansion is here O(1) instead of just O(ε), and the bound (23) is improved by a factor ε. The improvement of the time scale comes about by observing that a function x∗(t) that solves (1) up to a defect d(t), i.e.,

satisfies an error bound, for 0≤t≤T,

where C is independent of ε but grows exponentially with T. This is proved by decomposing B(x,t)=ε−1B0(0)+ε−1(B0(εx)−B0(0))+B1(x,t) and using the variation-of-constants formula and the Gronwall inequality. The improvement of the bound (23) is a consequence of the fact that the derivatives of B(x,t) are bounded independently of ε.

(c): For the error bound of Section 6 we need precise formulas for the dominant terms of (22). Inserting the expansion (19) into the differential equation (1) and comparing the coefficients of eikϕ(t)/ε yields

where, using Taylor series expansion for the nonlinearities,

The solution z0(t) is influenced by the functions z±1 which, by (28), satisfy

Note that, whereas B(z0,t) is of size O(ε−1), its derivatives are bounded independently of ε due to the special form (1).

We consider the two-step formulation (11) of the filtered Boris algorithm, and we write the numerical approximation xn as

We use the same notation for the coefficient functions as in Section 4. Note, however, that for the numerical solution these functions are not the same and depend on the additional parameter h. We again consider the basis {vj(x,t)} and the corresponding orthogonal projections Pj(x,t), and we write the coefficient functions zk as in (20), with the only difference that here the argument z0(t) is the non-oscillating part of (32) and not that of (19).

Let {xn} be a numerical solution of the filtered Boris algorithm applied to (1) with bounded initial velocity (16), and suppose that it stays in a compact set K for 0≤nh≤T. We assume the non-resonance condition

for a fixed, but arbitrary truncation index N≥2, and (for convenience of presentation) also the bound η=h/ε≤C. Moreover, we assume that the filter function Ψ in (11) is bounded by |Ψ(iξ)|≤C|tanc(12ξ)| for all real ξ, where \rm tanc(ξ)=tan(ξ)/ξ. Then, we have that

(a) and (b) The coefficient functions zk(t) together with their derivatives (up to order N) as well as the remainder term and its derivative satisfy the bounds of items (a) and (b) of Theorem 4.1.