In this work we propose an efficient stochastic plug-and-play (PnP) algorithm for imaging inverse problems. The PnP stochastic gradient descent methods have been recently proposed and shown improved performance in some imaging applications over standard deterministic PnP methods. However, current stochastic PnP methods need to frequently compute the image denoisers which can be computationally expensive. To overcome this limitation, we propose a new stochastic PnP-ADMM method which is based on introducing stochastic gradient descent inner-loops within an inexact ADMM framework. We provide the theoretical guarantee on the fixed-point convergence for our algorithm under standard assumptions. Our numerical results demonstrate the effectiveness of our approach compared with state-of-the-art PnP methods. 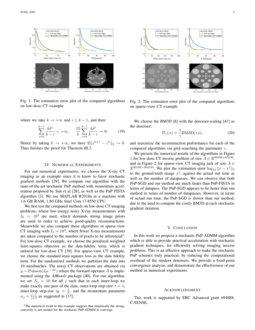 Recent trends in the research of computational imaging have been focusing on developing algorithms which are able to jointly utilize the power of classical physical models and advanced image priors [venkatakrishnan2013plug, egiazarian2007compressed, kamilov2017plug, romano2017little, reehorst2018regularization]

. These methods typically take the form of well-known optimization algorithms, and plug in a pretrained deep neural network

represents the random additive noise. Traditionally, in order to get a good estimate of the ground truth

x†, we typically seek to find the minimizer of a composite objective function:

where f(x)=1n∑ni=1fi(x)=1n∑ni=1f(ai,bi,x) is the data fidelity term which is assumed to be convex and smooth, such as the least-square loss f(x)=12n∥Ax−b∥22, and here we denote ai as the i-th row of A and bi as the i-th element of b. Meanwhile g(x) in (2) denotes a regularization term which encodes image priors, with classical examples including the sparsity-inducing regularization in wavelet domain and the total-variation regularization [chambolle2016introduction]

Considering the link between proximal operators and denoising, researchers [venkatakrishnan2013plug, egiazarian2007compressed, kamilov2017plug] have discovered that if they simply replace the proximal operator on g with a direct call to an off-the-shelf denoising algorithm, such as NLM [buades2005non], TNRD [chen2017trainable], BM3D [dabov2008image], or the DnCNN [zhang2017beyond], excellent image recovery/reconstruction results can often be attained. Although the imaging community has very limited theoretical understanding and convergence analysis for such algorithms so far, these ad-hoc approaches have shown state-of-the-art performances in various imaging applications.

and proposed PnP-SGD in order to improve the computational efficiency. In each iteration of PnP-SGD, a minibatch stochastic gradient is computed as an unbiased estimator of the full gradient, which yields a computational benefit in each iteration. However, as discussed in

This paper’s contribution is two-fold:

In a recent work of Sun et al [sun2019online], a stochastic PnP algorithm is proposed for image restoration and reconstruction, which can be written as the following:

where ▽fSk(xk−1) denotes a minibatch stochastic gradient with a randomly subsampled index Sk, chosen uniformly at random from a partitioned index ^I={I1,I2,...,IK}, where I1∪I2∪...∪IK=[n] and Ii∩Ij=∅, ∀i≠j∈[K]. The PnP-SGD algorithm is essentially a plug-and-play variant of the stochastic proximal gradient descent [rosasco2014convergence] which is based on the forward-backward splitting [lions1979splitting]. In each iteration of PnP-SGD, a minibatch stochastic gradient estimate is computed:

where m=nK. It first performs a stochastic gradient descent step with a step-size η, then a denoising step is computed using an off-the-shelf denoiser [buades2005non, dabov2008image, chen2017trainable, zhang2017beyond] denoted as D(⋅). Finally a momentum step is performed for empirical convergence acceleration with a momentum parameter αk as in the FISTA algorithm [2009_Beck_Fast]. The computational benefit of PnP-SGD over its deterministic counterparts (PnP-ISTA/PnP-FISTA [kamilov2017plug]) comes from using an approximation of the full gradient by the minibatch gradient (3) which can be efficiently computed. However, the PnP-SGD does not have the capability to reduce the cost of computing the denoising step – the denoiser has to be called at each iteration. To overcome this computational bottleneck, one plausible approach is to decouple the gradient step and the denoising step via Douglas-Rachford splitting/ADMM instead of the forward-backward splitting. In this work we study and propose a stochastic gradient extension of the PnP-ADMM algorithm111We write the update rule of PnP-ADMM in this paper using the equivalent Douglas-Rachford splitting reformulation [ryu2019plug, Section 9.1] for the simplicity of notation in analysis. [venkatakrishnan2013plug]:

where in each iteration an exact proximal step on the data-fidelity term f(x) is computed with a constant step-size τ:

In classical ADMM the step-size τ can be any positive constant to ensure convergence. The update rule of the PnP-ADMM can be written as zk+1=T(zk), where T(⋅) is an operator defined as [ryu2019plug]:

Our proposed solution, presented in algorithm 1, is to use SGD with momentum to approximately solve the prox step (4) within PnP-ADMM framework. We denote the number of inner-iterations at the k-th outerloop as Nk. In each inner-iteration a stochastic gradient descent step is performed with a step-size ηk, and then followed by a momentum step for empirical acceleration. Unlike the PnP-SGD which needs to call the denoiser in every stochastic gradient descent iteration, the proposed method only needs to compute the denoiser once every Nk iterations. Our theoretical analysis is restricted to the case where we set αj=0 and the parameters Nk and ηk are chosen adaptively in each outer-iteration. However, in practice, a constant step size η which is inversely proportional to the Lipschitz constant ηk=O(1L), τ=O(1), a constant number of inner-iterations Nk=O(K), and a FISTA-like momentum parameter αj=j−1j+3 [chambolle2015convergence] are suggested for good empirical performance.

where εk denotes the approximation error. Now the desired fixed-point convergence can be established for (6), if we make the following standard assumptions as in [ryu2019plug] on the denoiser and the data-fidelity term.

It is easy to show that A.1 implies a relaxed non-expansiveness condition on D(⋅) which reads ∥D(x)−D(y)∥2≤(1+β)∥x−y∥2 and is satisfied for a wide class of modern denoisers such as NLM and properly trained DnCNNs [ryu2019plug].

We first apply an existing convergence result for SGD for establishing the approximation accuracy of the inner-loop:

Under Assumption A.2, denote that for k-th outer-loop of Stochastic PnP-ADMM yk⋆=proxτf[zk], and define the following quantities for each outer-iteration k:

where the expectation is taken over the random sampling of the indices within the inner-loop.

Proof. We first observe that the proximal step yk⋆=proxτf[zk] can be written precisely as a finite-sum optimization problem of the follow form:

which is a (τμ+1)-strongly-convex objective and each of the element in the sum is (τL+1)-smooth.

Now, we are able to prove the fixed-point convergence for the inexact recursion (6), and hence for our proposed method.

Our main theorem suggests that for the basic form of Algorithm 1 where we choose the momentum αj=0, the outerloop step-size τ=O(1), the inner-loop step-size decreasing in k and the number of inner-iterations increasing in k, Algorithm 1 is guaranteed to converge to a fix point. However our numerical results in section IV suggest that we may set the number of inner-loop Nk and step size ηk to be constant and use FISTA-type of momentum [2009_Beck_Fast, beck2009fast, chambolle2015convergence] for good empirical performance in practice.

Firstly, due to assumption A.1 we have:

If we recursively apply the same argument we will get:

Then we use a classic criterion to show the boundedness of series ∑+∞i=0vi where vi=kδik−i. For any finite p>1, we have:

For our numerical experiments, we choose the X-ray CT imaging as an example since it is know to favor stochastic gradient methods [tang2019practicality]. We compare our algorithm with the state-of-the-art stochastic PnP method with momentum acceleration proposed by Sun et al [sun2019online], as well as the PnP FISTA algorithm [kamilov2017plug]. We use MATLAB R2018a in a machine with 1.6 GB RAM, 1.80 GHz Intel Core i7-8550 CPU.

We first test the compared methods on low-dose CT imaging problems, where low-energy noisy X-ray measurements with I0=103 are used, which demands strong image priors are used in order to achieve good-quality reconstructions. Meanwhile we also compare these algorithms in sparse-view CT imaging with I0=104, where fewer X-ray measurements are taken compared to the number of pixels to be inferenced222The numerical result in this example suggests that empirically the strong-convexity is not needed for the stochastic PnP-ADMM to converge.. For low-dose CT example, we choose the penalized weighted least-squares objective as the data-fidelity term, which is tailored for low-dose CT [wang2006penalized]. For sparse-view CT example, we choose the standard least-squares loss as the data fidelity term. For the randomized methods we partition the data into 10 minibatches. The noisy CT observations are obtained via y∼Poisson(I0e−Ax) where the forward operator A is implemented using the AIRtools package [hansen2012air]. For our algorithm, we set Nj=10 for all j such that in each inner-loop we make exactly one pass of the data, outer-loop step-size τ=1, inner-loop step-size ηk=1L, and the momentum parameter αj=j−1j+3 as suggested in [chambolle2015convergence].

and maximize the reconstruction performance for each of the compared algorithms via grid-searching the parameter γ.

We present the numerical results of the algorithms in Figure 1 for low-dose CT inverse problem of size A∈R88256×65536, and in Figure 2 for sparse-view CT imaging task of size A∈R92160×262144. We plot the estimation error log10∥x−x†∥2 to the ground-truth image x†, against the actual run time as well as the number of datapasses. We can observe that both PnP-SGD and our method are much faster than PnP-FISTA in terms of datapass. The PnP-SGD appears to be faster than our method in terms of number of datapasses. However, in terms of actual run time, the PnP-SGD is slower than our method, due to the need to compute the costly BM3D at each stochastic gradient iteration.

In this work we propose a stochastic PnP-ADMM algorithm which is able to provide practical acceleration with stochastic gradient techniques, for efficiently solving imaging inverse problems. This is an effective approach to make the stochastic PnP schemes truly practical, by reducing the computational overhead of the modern denoisers. We provide a fixed-point convergence analysis, and demonstrate the effectiveness of our method in numerical experiments.

This work is supported by ERC Advanced grant 694888, C-SENSE.