We present a fast method for evaluating expressions of the form u_j = ∑_i = 1,i = j^n α_i/x_i - x_j, for j = 1,...,n, where α_i are real numbers, and x_i are points in a compact interval of R. This expression can be viewed as representing the electrostatic potential generated by charges on a line in R^3. While fast algorithms for computing the electrostatic potential of general distributions of charges in R^3 exist, in a number of situations in computational physics it is useful to have a simple and extremely fast method for evaluating the potential of charges on a line; we present such a method in this paper, and report numerical results for several examples. 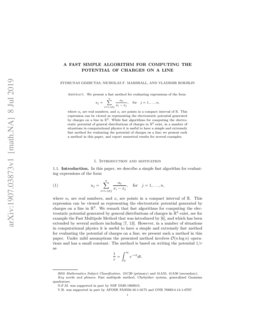 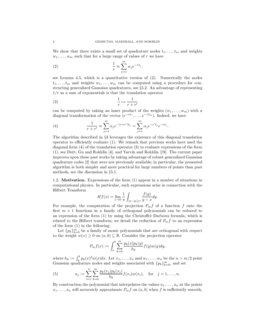 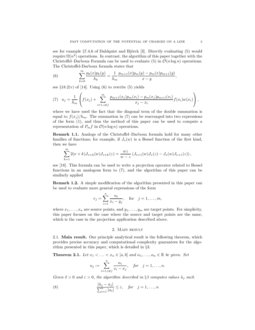 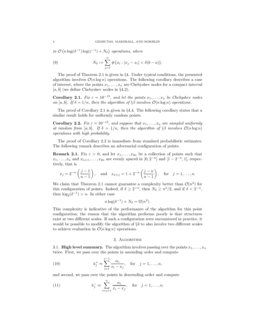 In this paper, we describe a simple fast algorithm for evaluating expressions of the form

where αi are real numbers, and xi are points in a compact interval of R. This expression can be viewed as representing the electrostatic potential generated by charges on a line in R3. We remark that fast algorithms for computing the electrostatic potential generated by general distributions of charges in R3 exist, see for example the Fast Multipole Method that was introduced by [6], and which has been extended by several authors including [7, 13]. However, in a number of situations in computational physics it is useful to have a simple and extremely fast method for evaluating the potential of charges on a line; we present such a method in this paper. Under mild assumptions the presented method involves O(nlogn) operations and has a small constant. The method is based on writing the potential 1/r as

We show that there exists a small set of quadrature nodes t1,…,tm and weights w1,…,wm such that for a large range of values of r we have

see Lemma 4.5, which is a quantitative version of (2). Numerically the nodes t1,…,tm and weights w1,…,wm can be computed using a procedure for constructing generalized Gaussian quadratures, see §5.2. An advantage of representing 1/r as a sum of exponentials is that the translation operator

can be computed by taking an inner product of the weights (w1,…,wm)

with a diagonal transformation of the vector

The algorithm described in §3 leverages the existence of this diagonal translation operator to efficiently evaluate (1). We remark that previous works have used the diagonal form (4) of the translation operator (3) to evaluate expressions of the form (1), see Dutt, Gu and Rokhlin [4], and Yarvin and Rokhlin [19]. The current paper improves upon these past works by taking advantage of robust generalized Gaussian quadrature codes [2] that were not previously available; in particular, the presented algorithm is both simpler and more practical for large numbers of points than past methods, see the discussion in §5.1.

Expressions of the form (1) appear in a number of situations in computational physics. In particular, such expressions arise in connection with the Hilbert Transform

Let {pk}∞k=0 be a family of monic polynomials that are orthogonal with respect to the weight w(x)≥0 on (a,b)⊆R. Consider the projection operator

By construction the polynomial that interpolates the values

u1,…,un at the points x1,…,xn will accurately approximate Pmf on (a,b) when f is sufficiently smooth, see for example §7.4.6 of Dahlquist and Björck [3]. Directly evaluating (5) would require Ω(n2) operations. In contrast, the algorithm of this paper together with the Christoffel–Darboux Formula can be used to evaluate (5) in O(nlogn) operations. The Christoffel-Darboux formula states that

where we have used the fact that the diagonal term of the double summation is equal to f(xj)/hm. The summation in (7) can be rearranged into two expressions of the form (1), and thus the method of this paper can be used to compute a representation of Pmf in O(nlogn) operations.

Analogs of the Christoffel–Darboux formula hold for many other families of functions; for example, if Jν(w) is a Bessel function of the first kind, then we have

see [18]. This formula can be used to write a projection operator related to Bessel functions in an analogous form to (7), and the algorithm of this paper can be similarly applied

where x1,…,xn are source points, and y1,…,ym are target points. For simplicity, this paper focuses on the case where the source and target points are the same, which is the case in the projection application described above.

Our principle analytical result is the following theorem, which provides precise accuracy and computational complexity guarantees for the algorithm presented in this paper, which is detailed in §3.

Given δ>0 and ε>0, the algorithm described in §3 computes values ~uj such

The proof of Theorem 2.1 is given in §4. Under typical conditions, the presented algorithm involves O(nlogn) operations. The following corollary describes a case of interest, where the points x1,…,xn are Chebyshev nodes for a compact interval [a,b] (we define Chebyshev nodes in §4.2).

The proof of Corollary 2.1 is given in §4.4. The following corollary states that a similar result holds for uniformly random points.

The proof of Corollary 2.2

is immediate from standard probabilistic estimates. The following remark describes an adversarial configuration of points.

and second, we pass over the points in descending order and compute

In the following, we give an informal description of the forward pass of the algorithm that computes

Assume that a small set of nodes t1,…,tm and weights w1,…,wm such that

where δ>0 is given and fixed. The existence and computation of such nodes and weights is described in §4.4 and §5.2. We divide the sum defining u+j into two parts:

then it is straightforward to verify that

We can now summarize the algorithm for computing ~u+1,…,~u+n. For each j, we compute ~u+j by the following three steps:

In the following, we give a detailed description of the forward pass of the algorithm that computes ~u+1,…,~u+n. Suppose that δ>0 and ε>0 are given and fixed. We describe the algorithm under the assumption that we are given quadrature nodes t1,…,tm and weights w1,…,wm such that

The existence of such weights and nodes is established in §4.4, and the computation of such nodes and weights is discussed in §5.2. To simplify the description of the algorithm, we assume that x0=−∞ is a placeholder node that does not generate a potential.

In some applications, it may be necessary to evaluate an expression of the form (1) for many different weights α1,…,αn associated with a fixed set of points x1,…,xn. For example, in the projection application described in §1.2 the weights α1,…,αn correspond to a function that is being projected, while the points x1,…,xn are a fixed set of quadrature nodes. In such situations, pre-computing the exponentials e−(xj−xj0)ti used in the Algorithm 3.1 will significantly improve the runtime, see §5.1.

In this section we complete the proof of Theorem 2.1; the section is organized as follows. In §4.2 we give mathematical preliminaries. In §4.3 we state and prove two technical lemmas. In §4.4 we prove Lemma 4.5, which together with the analysis in §3 establishes Theorem 2.1. In §4.5 we prove Corollary 2.1, and Corollary 2.2.

Let a<b∈R and n∈Z>0 be fixed, and suppose that f:[a,b]→R, and x1<⋯<xn∈[a,b] are given. The interpolating polynomial P of the function f at x1,…,xn is the unique polynomial of degree at most n−1 such that

This interpolating polynomial P can be explicitly defined by

where qj is the nodal polynomial for xj, that is,

We say x1,…,xn are Chebyshev nodes for the interval [a,b] if

The following lemma is a classical result in approximation theory. It says that a smooth function on a compact interval is accurately approximated by the interpolating polynomial of the function at Chebyshev nodes, see for example §4.5.2 of Dahlquist and Björck [3].

In addition to Lemma 4.1, we require a result about the existence of generalized Gaussian quadratures for Chebyshev systems. In 1866, Gauss [5] established the existence of quadrature nodes x1,…,xn and weights w1,…,wn for an interval [a,b] such that

has at most n distinct zeros in [a,b]. The following result of Kreĭn says that any function in the span of a Chebyshev system of 2n functions can be integrated exactly by a quadrature with n nodes and n weights.

Let f0,…,f2n−1 be a Chebyshev system of continuous functions on [a,b], and w:(a,b)→R be a continuous positive weight function. Then, there exists unique nodes x1,…,xn and weights w1,…,wn such that

In this section, we state and prove two technical lemmas that are involved in the proof of Theorem 2.1. We remark that a similar version of Lemma 4.3 appears in [15].

By writing the derivative of tne−ta as

we can deduce that the maximum of tne−ta occurs at t=n/a, that is,

It remains to show that 2nne−n≤n!. Since ln(x) is a increasing function, we have

Exponentiating both sides of this inequality gives enne−n≤n!, which is a classical inequality related to Stirling’s approximation. This completes the proof. ∎

Suppose that ε>0 and M>1 are given. Then, there exists

for some choice of coefficients cj(r) that depend on r.

We claim that the right hand side of this equation is the interpolating polynomial Pt,i0(r) for e−rt at ri0n+k,…,r(i0+1)n, that is,

Since n=⌊log4ε−1⌋+1 the proof is complete. ∎

The proof of Lemma 4.4 has the additional consequence that the coefficients c1(r),…,cm(r) in (22) can be chosen such that they satisfy

Indeed, in (24) the coefficients cj(r) are either equal zero or equal to the nodal polynomial, see (19), for Chebyshev nodes on an interval that contains r. The nodal polynomials for Chebyshev nodes on an interval [a,b] are bounded by √2 on [a,b], see for example [15]. The fact that e−rt can be approximated as a linear combination of functions e−r1t,…,e−rmt with small coefficients means that the approximation of Lemma 4.4 can be used in finite precision environments without any unexpected catastrophic cancellation.

Previously in §3.2, we proved that the algorithm of §3 involves O(nm+Nδ) operations. To complete the proof of Theorem 2.1 it remains to show that there exists

The collection of functions e−r0t,…,e−r2m−1t form a Chebyshev system of continuous functions on the interval [0,log(2ε−1)], see for example [9]. Thus, by Lemma 4.2 there exists m quadrature nodes t1,…,tm and weights w1,…,wm such that

By rescaling the problem we may assume that [a,b]=[−1,1] such that the Chebyshev nodes x1,…,xn are given by

By the result of Theorem 2.1, it suffices to show that Nδ=O(nlogn), where