A Fast Counting Method for 6-motifs with Low Connectivity

A k-motif (or graphlet) is a subgraph on k nodes in a graph or network. Counting of motifs in complex networks has been a well-studied problem in network analysis of various real-word graphs arising from the study of social networks and bioinformatics. In particular, the triangle counting problem has received much attention due to its significance in understanding the behavior of social networks. Similarly, subgraphs with more than 3 nodes have received much attention recently. While there have been successful methods developed on this problem, most of the existing algorithms are not scalable to large networks with millions of nodes and edges. The main contribution of this paper is a preliminary study that genaralizes the exact counting algorithm provided by Pinar, Seshadhri and Vishal to a collection of 6-motifs. This method uses the counts of motifs with smaller size to obtain the counts of 6-motifs with low connecivity, that is, containing a cut-vertex or a cut-edge. Therefore, it circumvents the combinatorial explosion that naturally arises when counting subgraphs in large networks. 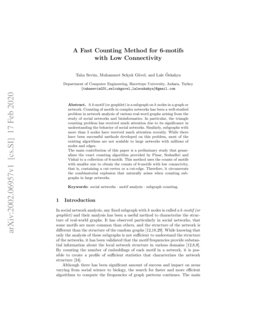 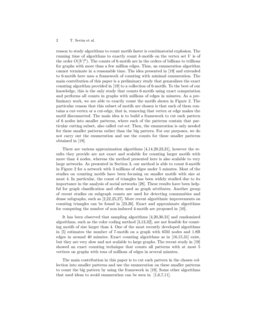 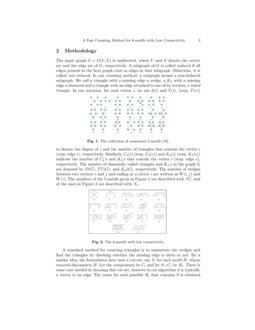 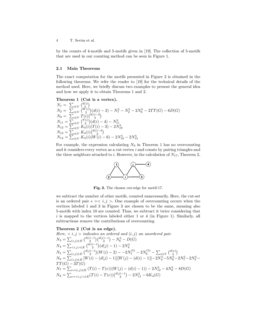 Efficiently Counting Vertex Orbits of All 5-vertex Subgraphs, by EVOKE

A Survey on Subgraph Counting: Concepts, Algorithms and Applications to Network Motifs and Graphlets

A systematic association of subgraph counts over a network

In this paper, we introduce a generalization of graphlets to heterogeneo...
Ryan A. Rossi, et al. ∙

The use of network based approaches to model and analyse large datasets ...
Pietro Hiram Guzzi, et al. ∙

Although there has been significant amount of success and impact on areas varying from social science to biology, the search for faster and more efficient algorithms to compute the frequencies of graph patterns continues. The main reason to study algorithms to count motifs faster is combinatorial explosion. The running time of algorithms to exactly count k-motifs on the vertex set V is of the order O(|V|k). The counts of 6-motifs are in the orders of billions to trillions for graphs with more than a few million edges. Thus, an enumeration algorithm cannot terminate in a reasonable time. The idea presented in [19] and extended to 6-motifs here uses a framework of counting with minimal enumeration. The main contribution of this paper is a preliminary study that genaralizes the exact counting algorithm provided in [19] to a collection of 6-motifs. To the best of our knowledge, this is the only study that counts 6-motifs using exact computation and performs all counts in graphs with millions of edges in minutes. As a preliminary work, we are able to exactly count the motifs shown in Figure 2. The particular reason that this subset of motifs are chosen is that each of them contains a cut-vertex or a cut-edge, that is, removing that vertex or edge makes the motif disconnected. The main idea is to build a framework to cut each pattern of 6 nodes into smaller patterns, where each of the patterns contain that particular cutting subset, also called cut-set. Then, the enumeration is only needed for these smaller patterns rather than the big pattern. For our purposes, we do not carry out the enumeration and use the counts for these smaller patterns obtained in [19].

There are various approximation algorithms [4, 14, 20, 23, 31], however the results they provide are not exact and scalable for counting larger motifs with more than 4 nodes, whereas the method presented here is also scalable to very large networks. As presented in Section 3, our method is able to count 6-motifs in Figure 2 for a network with 3 millions of edges under 5 minutes. Most of the studies on counting motifs have been focusing on smaller motifs with size at most 4. In particular, the count of triangles has been widely studied due to its importance in the analysis of social networks [28]. These results have been helpful for graph classification and often used as graph attributes. Another group of recent studies on subgraph counts are used for detecting communities and dense subgraphs, such as [2, 22, 25, 27]. More recent algorithmic improvements on counting triangles can be found in [23, 26]. Exact and approximate algorithms for computing the number of non-induced 4-motifs are proposed in [10].

It has been observed that sampling algorithms [4, 20, 30, 31] and randomized algorithms, such as the color coding method [3, 13, 32], are not feasible for counting motifs of size larger than 4. One of the most recently developed algorithms in [5]estimates the number of 7-motifs on a graph with 65M nodes and 1.8B edges in around 40 minutes. Exact counting algorithms as in [16, 15, 31] exist, but they are very slow and not scalable to large graphs. The recent study in [19] showed an exact counting technique that counts all patterns with at most 5 vertices on graphs with tens of millions of edges in several minutes.

The main contribution in this paper is to cut each pattern in the chosen collection into smaller patterns and use the enumeration on these smaller patterns to count the big pattern by using the framework in [19]. Some other algorithms that used ideas to avoid enumeration can be seen in  [1, 6, 7, 11].

The input graph G=G(V,E) is undirected, where V and E denote the vertex set and the edge set of G, respectively. A subgraph of G is called induced if all edges present in the host graph exist as edges in that subgraph. Otherwise, it is called non-induced. In our counting method, a subgraph means a non-induced subgraph. We call a triangle with a missing edge a wedge, a K4 with a missing edge a diamond and a triangle with an edge attached to one of its vertices, a tailed triangle.

A standard method for counting triangles is to enumerate the wedges and find the triangles by checking whether the missing edge is there or not. By a similar idea, the formulation here uses a cut-set, say S, for each motif H, whose removal disconnects H. Let the components be Ci and let S∪Ci be Hi. There is some care needed in choosing this cut-set, however in our algorithm it is typically a vertex or an edge. The count for each possible Hi that contains S is obtained by the counts of 4-motifs and 5-motifs given in [19]. The collection of 5-motifs that are used in our counting method can be seen in Figure 1.

The exact computation for the motifs presented in Figure 2 is obtained in the following theorems. We refer the reader to [19] for the technical details of the method used. Here, we briefly discuss two examples to present the general idea and how we apply it to obtain Theorems 2.1 and 2.2.

For example, the expression calculating N9 in Theorem 2.1 has no overcounting and it considers every vertex as a cut-vertex i and counts by pairing triangles and the three neighbors attached to i.

However, in the calculation of N17, Theorem 2.2

, we subtract the number of other motifs, counted unnecessarily. Here, the cut-set is an ordered pair

Experiments are performed on a computer that has 2.7 GHz dual-core Intel Core i5 processor, 3 MB L3 Cache and 8 GB 1867 MHz LPDDR3 memory. Our counting formulas are implemented with C++ using ESCAPE [19] framework. The datasets are taken from [21, 17].

The input graph G=G(V,E) is undirected and has n vertices and m edges, where multiple edges and loops are ignored. The input graph is stored as an adjacency list, where each list is a hash table. Thus, edge queries can be made in constant time.

The motifs studied here are not induced, however it is still possible to observe the behavior of the relationships in the corresponding network by the motif analysis obtained in Figure 4. As expected, the most common motif is the 5-star and the tree motifs occur more frequently. One exception to that is the 5-star with an edge added. This is not surprising, since this and the 5-star are two graphs, abundant at the hub vertices with very high degrees in most social networks. Also, Figure 4 indicates that when the clique number of a motif is higher, the count of that motif is less.

The runtimes to count smaller motifs were predicted for any network in [19]. Similarly, we obtain predictions using the runtimes in the last column of Table 1, as shown in Figure 5. All counts in Theorems 2.1 and 2.2 can be computed in time O(n+m), where n=|V| and m=|E|. As social networks are sparse graphs and |E|=O(n), our prediction is −0.1476+1.6204|E| seconds for any network with |E| edges. As observed in Table 1, our algorithm is able to execute the counts of all 6-motifs in Figure 2 under 20 seconds, excluding the runtime spent to obtain the counts of smaller motifs.

In this study, we presented a preliminary work that genaralizes the exact counting method for motifs of networks in [19] to a collection of 6-motifs with lower connectivity. We performed experiments to analyze the motif structure in real-world graphs and analyzed the runtime efficiency for the computations. The idea of counting 6-motifs by using algorithms based on the enumeration of smaller motifs results in much shorter runtime compared to other state-of-the-art algorithms. In a future study, we plan to extend this counting method to the remaining connected 6-motifs and use this data to obtain the counts of induced 6-motifs.

The research of the third author was supported in part by the BAGEP Award of the Science Academy of Turkey and by the TUBITAK Grant 11E283.