In this letter, we present a fast and well-conditioned spectral method based on the Chebyshev polynomials for computing the continuous part of the nonlinear Fourier spectrum. The algorithm achieves a complexity of O(N_iter.N N) per spectral node for N samples of the signal at the Chebyshev nodes where N_iter. is the number of iterations of the biconjugate gradient stabilized method. 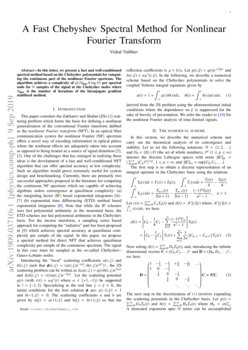 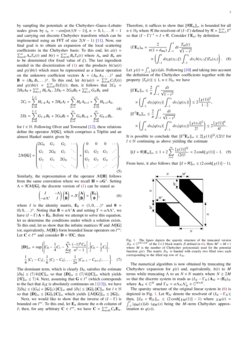 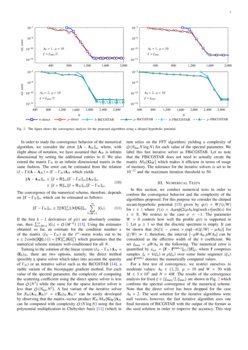 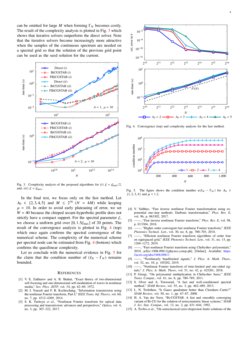 In this paper, we present a Chebyshev based spectral method for the comp...
Vishal Vaibhav, et al. ∙

We propose a decomposition method for the spectral peaks in an observed ...
Kaan Gokcesu, et al. ∙

This paper considers the Zakharov and Shabat (ZS) [1] scattering problem which forms the basis for defining a nonlinear generalization of the conventional Fourier transform dubbed as the nonlinear Fourier transform (NFT). In an optical fiber communication system the nonlinear Fourier (NF) spectrum offers a novel way of encoding information in optical pulses where the nonlinear effects are adequately taken into account as opposed to being treated as a source of signal distortion [2, 3]. One of the challenges that has emerged in realizing these ideas is the development of a fast and well-conditioned NFT algorithm that can offer spectral accuracy at low complexity. Such an algorithm would prove extremely useful for system design and benchmarking. Currently, there are primarily two successful approaches proposed in the literature for computing the continuous NF spectrum which are capable of achieving algebraic orders convergence at quasilinear complexity: (a) the integrating factor (IF) based exponential integrators [4, 5, 6, 7] (b) exponential time differencing (ETD) method based exponential integrators [8]. Note that while the IF schemes uses fast polynomial arithmetic in the monomial basis, the ETD schemes use fast polynomial arithmetic in the Chebyshev basis. For the inverse transform, a sampling series based approach for computing the “radiative” part has been proposed in [9] which achieves spectral accuracy at quasilinear complexity per sample of the signal. In this paper, we propose a spectral method for direct NFT that achieves quasilinear complexity per sample of the continuous spectrum. The signal in this case must be sampled at the so-called Chebyshev–Gauss–Lobatto nodes.

derived from the ZS problem using the aforementioned initial conditions where the dependence on ξ is suppressed for the sake of brevity of presentation. We refer the reader to [10] for the nonlinear Fourier analysis of time-limited signals.

In this section, we describe the numerical scheme and carry out the theoretical analysis of its convergence and stability. Let us set the following notations: N={1,2,…} and N0={0}∪N (the set of whole numbers), ℓp (1≤p≤∞) denotes the discrete Lebesgue spaces with norm ∥C∥p=|∑∞n=0|Cn|p|1/p,1≤p<∞, and ∥C∥∞=sup{C0,C1,…}.

, and, introducing the infinite dimensional vectors

The next step in the discretization of (1) involves expanding the scattering potentials in the Chebyshev basis. Let g(t)=∑∞n=0GnTn(t) and h(t)=∑∞n=0HnTn(t) where Hn=αG∗n. A truncated expansion upto N terms can be accomplished by sampling the potentials at the Chebyshev–Gauss–Lobatto nodes given by tn=−cos[nπ/(N−1)],n=0,1,…N−1 and carrying out discrete Chebyshev transform which can be implemented using an FFT of size 2(N−1) [11]. Now, our final goal is to obtain an expansion of the local scattering coefficients in the Chebyshev basis: To this end, let a(t)=∑∞n=0AnTn(t) and b(t)=∑∞n=0BnTn(t) where An and Bn are to be determined (for fixed value of ξ). The last ingredient needed in the discretization of (1) are the products h(t)a(t) and g(t)b(t) which must be represented as a linear operation on the unknown coefficient vectors A=(A0,A1,…)⊺ and B=(B0,B1,…)⊺. To this end, let h(t)a(t)=∑∞l=0ClTl(t) and g(t)b(t)=∑∞l=0DlTl(t); then, it follows that 2C0=2H0A0+∑∞k=1HkAk, 2D0=2G0B0+∑∞k=1GkBk and

for l∈N. Following Olver and Townsend [12], these relations define the operator M[G], which comprises a Töplitz and an almost Hankel matrix given by

Similarly, the representation of the operator M[H] follows from the same convention where we recall H=αG∗. Setting Λ=KM[G], the discrete version of (1) can be stated as

E0=(1,0,…)⊺ and 0=(0,0,…)⊺. Noting that B=αΛ∗A and setting Γ=αΛΛ∗, we have (I−Γ)A=E0. Before we attempt to solve this equation, let us determine the conditions under which a solution exists. To this end, let us show that the infinite matrices K and M[G] (or, equivalently, M[H]) form bounded linear operators on ℓ∞: Let C∈ℓ∞ and consider D=KC, then

The dominant term, which is clearly D0

Next, we would like to show that the inverse of (I−Γ) is bounded on ℓ∞. To this end, let En denote the n-th column of I; then, for any arbitrary C∈ℓ∞, we have C=∑∞n=0CnEn. Therefore, it suffices to show that ∥REn∥∞ is bounded for all n∈N0 where R the resolvent of (I−Γ) defined by R=∑∞l=1Γl so that (I−Γ)−1=I+R. Consider ΓEn; by definition

Let χ(t)=∫t−1|q(s)|ds. Following [10] and taking into account the definition of the Chebyshev coefficients together with the property |Tn(t)|≤1,n∈N0, we have

It is possible to conclude that ∥ΓlEn∥∞≤2[χ(1)]2l/(2l)! for l∈N continuing as above yielding the estimate

The numerical algorithm is now obtained by truncating the Chebyshev expansion for g(t) and, equivalently, h(t) to M terms while truncating Λ to an N×N matrix where N≥2M so that the discrete system in reads as (IN−ΓN)AN=(E0)N where AN∈CN and ΓN=αΛNΛ∗N∈CN×N.

In order to study the convergence behavior of the numerical algorithm, we consider the error ∥A−AN∥∞ where, with slight abuse of notation, we have assumed that AN is infinite dimensional by setting the additional entries to 0. We also extend the matrix ΓN to an infinite dimensional matrix in the same fashion. The error can be estimated from the relation (I−Γ)(A−AN)=(Γ−ΓN)AN which yields

The convergence of the numerical scheme, therefore, depends on ∥Γ−ΓN∥∞ which can be estimated as follows:

If the first k−1 derivatives of g(t) are absolutely continuous, then ∑∞l=M+1|Gl|=O(M−k) [13]. Using the estimates obtained so far, an estimate for the condition number κ of the matrix (IN−ΓN) in the ℓ∞–norm works out to be κ≤2cosh(∥Q∥1)(1+∥K∥2∞∥G∥21) which guarantees that the numerical scheme remains well-conditioned for all N.

Turning to the solution of the linear system (IN−ΓN)AN=(E0)N, there are two options, namely, the direct method (possibly a sparse solver which takes into account the sparsity of ΓN) or an iterative solver such as the BiCGSTAB [14], a stable variant of the biconjugate gradient method. For each value of the spectral parameter, the complexity of computing the scattering coefficient using the direct sparse solver is less than O(N3) while the same for the sparse iterative solver is less than O(Niter.N2). A fast variant of the iterative solver for SN(AN,BN)⊺=((E0)N,0N)⊺ can be easily developed by observing that the matrix–vector product KNMN[GM]AN can be computed with complexity O(NlogN) using the fast polynomial multiplication in Chebyshev basis [11] (which in turn relies on the FFT algorithm) yielding a complexity of O(Niter.NlogN) for each value of the spectral parameter. We label this fast iterative solver as FBiCGSTAB. Let us note that the FBiCGSTAB does not need to actually create the matrix MN[GM] which makes it efficient in terms of usage of memory. The tolerance for the iterative solvers is set to be 10−12 and the maximum iteration threshold to 50.

In this section, we conduct numerical tests in order to confirm the convergence behavior and the complexity of the algorithms proposed. For this purpose we consider the chirped secant-hyperbolic potential [15] given by q(t)=Wf(t/W) for t∈I where f(s)=A0exp[2iμA0log(sechs)]sech(s) for s∈R. We restrict to the case α=−1. The parameter W>0 controls how well the profile q(t) is supported in I. Let μ≥1 so that the discrete spectrum is empty. It can be shown that |b(ξ)|∼const.×exp[−π(|ξ/W|−μA0)] for |ξ/W|≫1; therefore, the interval [−μWA0,μWA0] can be considered as the effective width of the b coefficient. We set ξmax=μWA0 in the following. The numerical error is quantified by where f comprises samples fn=b(ξn)orρ(ξn) over some finite sequence (ξn) and f(num.) denotes the numerically computed values.

For a first test of convergence, we restrict ourselves to moderate values: A0∈{1,2}, μ=10 and W=30 with M≤3×103 and N=4M. The results of the convergence analysis for fixed ξ∈{ξmax/2,ξmax} are shown in Fig. 2 which confirms the spectral convergence of the numerical scheme. Note that the direct solver has been dropped for the case A0=2. The seed solution for the iterative algorithms were null vectors, however, the fast iterative algorithm uses one final iteration of BiCGSTAB with the output of the former as the seed solution in order to improve the accuracy. This step can be omitted for large M when forming ΓN becomes costly. The result of the complexity analysis is plotted in Fig. 3 which shows that iterative solvers outperform the direct solver. Note that the iterative solvers become increasingly more attractive when the samples of the continuous spectrum are needed on a spectral grid so that the solution of the previous grid point can be used as the seed solution for the current.

In the final test, we focus only on the fast method. Let A0∈{2,3,4,5} and M≤216 (N=4M) while keeping μ=10. In order to avoid early plateauing of error, we set W=40 because the chirped secant-hyperbolic profile does not strictly have a compact support. For the spectral parameter ξ, we choose a uniform grid over [0,1.5ξmax] of 20 points. The result of the convergence analysis is plotted in Fig. 4 (top) which once again confirms the spectral convergence of the numerical scheme. The complexity of the numerical scheme per spectral node can be estimated from Fig. 4 (bottom) which confirms the quasilinear complexity.

Let us conclude with the numerical evidence in Fig. 5 for the claim that the condition number of (IN−ΓN) remains bounded.