In this paper, a multi-parameterized proximal point algorithm combining with a relaxation step is developed for solving convex minimization problem subject to linear constraints. We show its global convergence and sublinear convergence rate from the prospective of variational inequality. Preliminary numerical experiments on testing a sparse minimization problem from signal processing indicate that the proposed algorithm performs better than some well-established methods 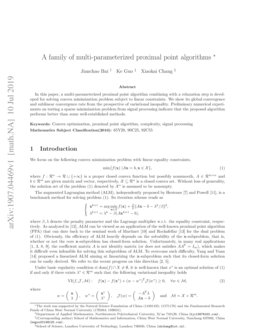 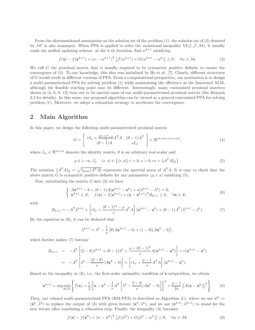 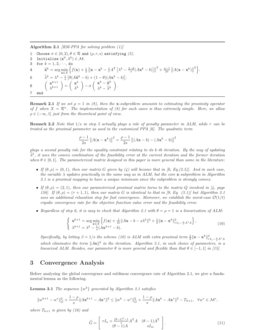 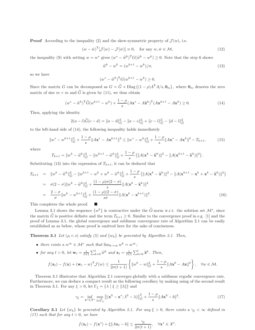 We focus on the following convex minimization problem with linear equality constraints,

are given matrix and vector, respectively,

X⊆Rn is a closed convex set. Without loss of generality, the solution set of the problem (1) denoted by X∗ is assumed to be nonempty.

The augmented Lagrangian method (ALM), independently proposed by Hestenes [8] and Powell [12], is a benchmark method for solving problem (1). Its iteration scheme reads as

where β,λ denote the penalty parameter and the Lagrange multiplier w.r.t. the equality constraint, respectively. As analyzed in [13], ALM can be viewed as an application of the well-known proximal point algorithm (PPA) that can date back to the seminal work of Martinet [11] and Rockafellar [14] for the dual problem of (1). Obviously, the efficiency of ALM heavily depends on the solvability of the x-subproblem, that is, whether or not the core x-subproblem has closed-form solution. Unfortunately, in many real applications [2, 4, 9, 10], the coefficient matrix A

is not identity matrix (or does not satisfies

AAT=Im), which makes it difficult even infeasible for solving this subproblem of ALM. To overcome such difficulty, Yang and Yuan [15] proposed a linearized ALM aiming at linearizing the x-subproblem such that its closed-form solution can be easily derived. We refer to the recent progress on this direction [3, 6].

Under basic regularity condition ri~{}dom(f)∩X≠∅, it is well-known that x∗ is an optimal solution of (1) if and only if there exists λ∗∈Rm such that the following variational inequality holds

From the aforementioned assumption on the solution set of the problem (1), the solution set of (2) denoted by M∗ is also nonempty. When PPA is applied to solve the variational inequality VI(f,J,M), it usually reads the unified updating scheme: at the k-th iteration, find wk+1 satisfying

We call G the proximal matrix that is usually required to be symmetric positive definite to ensure the convergence of (3). To our knowledge, this idea was initialized by He et al. [HLHY02]. Clearly, different structures of G would result in different versions of PPA. From a computational perspective, our motivation is to design a multi-parameterized PPA for solving problem (1) while maintaining the efficiency as the linearized ALM, although the feasible starting point may be different. Interestingly, many customized proximal matrices shown in [5, 7, 10, 16] turn out to be special cases of our multi-parameterized proximal matrix (See Remark 2.2 for details). In this sense, our proposed algorithm can be viewed as a general customized PPA for solving problem (1). Moreover, we adopt a relaxation strategy to accelerate the convergence.

In this paper, we design the following multi-parameterized proximal matrix

where Im∈Rm×m denotes the identity matrix, θ is an arbitrary real scalar and

The notation ∥ATA∥2=√λmax(ATA) represents the spectral norm of ATA. It is easy to check that the above matrix G is symmetric positive definite for any parameters (ρ,r,s) satisfying (5).

Now, substituting the matrix G into (3) we have

By the equation in (6), it can be deduced that

Based on the inequality in (6), i.e., the first-order optimality condition of x-subproblem, we obtain

Then, our relaxed multi-parameterized PPA (RM-PPA) is described as Algorithm 2.1, where we use ˜wk:=(˜xk,˜λk) to replace the output of (3) with given iterate (xk,λk), and we use (xk+1,λk+1) to stand for the new iterate after combining a relaxation step. Finally, the inequality (3) becomes

-subproblem amounts to estimating the proximity operator of

f when X=Rn. The implementation of (8) for such cases is thus extremely simple. Here, we allow ρ∈(−∞,1] just from the theoretical point of view.

Note that 1/s in step 5 actually plays a role of penalty parameter in ALM, while r can be treated as the proximal parameter as used in the customized PPA [7]. The quadratic term

plays a second penalty role for the equality constraint relating to its k-th iteration. By the way of updating ˜λk, it uses the convex combination of the feasibility error at the current iteration and the former iteration when θ∈[0,1]. The parameterized matrix designed in this paper is more general than some in the literature:

Before analyzing the global convergence and sublinear convergence rate of Algorithm 2.1, we give a fundamental lemma as the following.

Proof According to the inequality (2

) and the skew-symmetric property of

denotes the zero matrix of size

Then, applying the identity

to the left-hand side of (14), the following inequality holds immediately

Substituting (13) into the expression of Tk+1, it can be deduced that

This completes the whole proof.    ■

Lemma 3.1 shows the sequence {wk} is contractive under the ˜G-norm w.r.t. the solution set M∗, since the matrix ˜G is positive definite and the term Tk+1≥0. Similar to the convergence proof in e.g. [2] and the proof of Lemma 3.1, the global convergence and sublinear convergence rate of Algorithm 2.1 can be easily established as as below, whose proof is omitted here for the sake of conciseness.

Theorem 3.1 illustrates that Algorithm 2.1 converges globally with a sublinear ergodic convergence rate. Furthermore, we can deduce a compact result as the following corollary by making using of the second result in Theorem 3.1. For any ξ>0, let Γξ={λ | ξ≥∥λ∥} and

Proof By making use of the identity in (12) and by setting w=(x∗,λ)∈X∗×Rm into the second result of Theorem 3.1, we have

where the second equality and the final inequality use Ax∗=b. Then, it follows from (18) that

holds with ¯γ=γξ<∞ given by (17). Rearranging the above inequality, we have

According to (20) and (19), both the objective function value error and the feasibility error at the ergodic iterate xt will decrease in the order of O(1/t) as t goes to infinity.

In this section, we apply the proposed algorithm to solve the following l1-minimization problem from signal processing [9], which aims to reconstruct a length n sparse signal from m(<n) observations:

Note that this is a special case of (1) with specifications f=∥x∥1 and X=Rn. Applying Algorithm 2.1 to problem (21), we derive444The proximity operator is defined as Proxf,r(x)=argmin{f(x)+r2∥x−c∥2 |c∈Rn}. xk+1=Prox∥x∥1,r(x) that can be explicitly expressed by the shrinkage operator [4] to be coded by the MATLAB inner function ‘withresh’. Followed by Lemma 3.1, we use the following stopping criterions under given tolerance:

Consider an original signal x∈R10000 containing 180 spikes with amplitude ±1. The measurement matrix A∈R3000×10000 is drawn firstly from the standard norm distribution N(0,1) and then each of its row is normalized. The observation b is generated by b=Ax+v, where v

is generated by the Gaussian distribution

N(0,0.012I) on R3000. With the tuned parameters (r,s,ρ,σ)=(8,1.01∥ATA∥2/r,1,1.4), some computational results under different parameter θ are shown in Table 1 in which we present the number of iterations (IT), the CPU time in seconds (CPU), the final obtained residuals It_err and Eq_err, as well as the recovery error RE=∥xk−xorig∥/∥xorig∥. Reported results from Table 1 indicate that the choice of θ could make a great effect on the performance of our algorithm w.r.t. IT and CPU. And it seems that setting θ=0.5 would be a reasonable choice to save the CPU time and to cost fewer number of iterations. The reconstruction results under θ=0.5 are shown in Fig. 1, from which the solution obtained by our algorithm always has the correct number of pieces and is closer to the original noseless signal.

Next, we consider the problem (21) with large-scale dimensions (m,n)=(3000,20000). By comparing the proposed Algorithms 2.1 (RM-PPA) with the aforementioned tuned parameters to

we show comparative results about the convergence behaviors of the residuals LER(k):=log2(Eq\_{err}(k)) and LIR(k):=log2(It\_{err}(k)) in Fig. 2, respectively. The effect on recovering the original signal with different algorithms is shown in Fig. 3. Here, we emphasize that the parameter values in [7, 10] can not terminate the algorithms C-PPA and P-PPA because of the fact ∥ATA∥2=1 for their examples, so we set r the same value as ours but keep s as the value in their experiments. From Figs. 2-3, we observe that M-PPA is competitive to P-PPA and RM-PPA (that is, Algorithm 2.1) performs better than the rest three algorithms.