A family of codes with locality containing optimal codes

Locally recoverable codes were introduced by Gopalan et al. in 2012, and in the same year Prakash et al. introduced the concept of codes with locality, which are a type of locally recoverable codes. In this work we introduce a new family of codes with locality, which are subcodes of a certain family of evaluation codes. We determine the dimension of these codes, and also bounds for the minimum distance. We present the true values of the minimum distance in special cases, and also show that elements of this family are "optimal codes", as defined by Prakash et al. 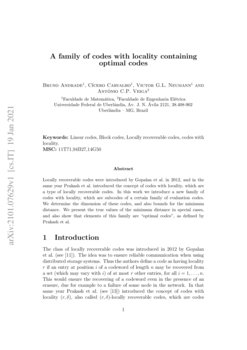 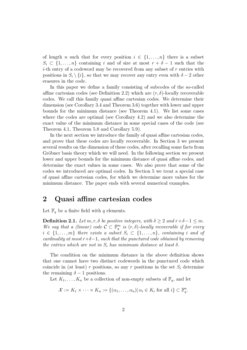 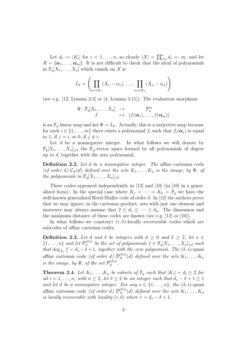 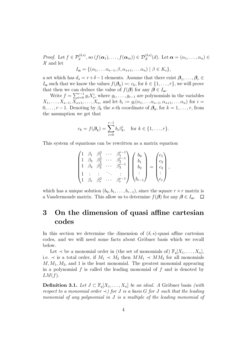 Cyclic Codes with Locality and Availability

We give an axiomatic foundation to Λ-quantiles, a family of generalized ...
Fabio Bellini, et al. ∙

On bases and the dimensions of twisted centralizer codes

According to their strength, the tracing properties of a code can be cat...
Marcel Fernandez, et al. ∙

In this article, we tackle for the first time the problem of dynamic mem...
Brice Minaud, et al. ∙

The class of locally recoverable codes was introduced in 2012 by Gopalan et al. (see [11]). The idea was to ensure reliable communication when using distributed storage systems. Thus the authors define a code as having locality r if an entry at position i of a codeword of length n may be recovered from a set (which may vary with i) of at most r other entries, for all i=1,…,n. This would ensure the recovering of a codeword even in the presence of an erasure, due for example to a failure of some node in the network. In that same year Prakash et al. (see [13]) introduced the concept of codes with locality (r,δ), also called (r,δ)-locally recoverable codes, which are codes of length n such that for every position i∈{1,…,n} there is a subset Si⊂{1,…,n} containing i and of size at most r+δ−1 such that the i-th entry of a codeword may be recovered from any subset of r entries with positions in Si∖{i}, so that we may recover any entry even with δ−2 other erasures in the code.

In this paper we define a family consisting of subcodes of the so-called affine cartesian codes (see Definition 2.2) which are (r,δ)-locally recoverable codes. We call this family quasi affine cartesian codes. We determine their dimension (see Corollary 3.4 and Theorem 3.6) together with lower and upper bounds for the minimum distance (see Theorem 4.1). We list some cases where the codes are optimal (see Corollary 4.2) and we also determine the exact value of the minimum distance in some special cases of the code (see Theorem 4.1, Theorem 5.8 and Corollary 5.9).

In the next section we introduce the family of quasi affine cartesian codes, and prove that these codes are locally recoverable. In Section 3 we present several results on the dimension of these codes, after recalling some facts from Gröbner basis theory which we will need. In the following section we present lower and upper bounds for the minimum distance of quasi affine codes, and determine the exact values in some cases. We also prove that some of the codes we introduced are optimal codes. In Section 5 we treat a special case of quasi affine cartesian codes, for which we determine more values for the minimum distance. The paper ends with several numerical examples.

Let Fq be a finite field with q elements.

Let m,r,δ be positive integers, with δ≥2 and r+δ−1≤m. We say that a (linear) code C⊂Fmq is (r,δ)-locally recoverable if for every i∈{1,…,m} there exists a subset Si⊂{1,…,n}, containing i and of cardinality at most r+δ−1, such that the punctured code obtained by removing the entries which are not in Si has minimum distance at least δ.

The condition on the minimum distance in the above definition shows that one cannot have two distinct codewords in the punctured code which coincide in (at least) r positions, so any r positions in the set Si determine the remaining δ−1 positions.

Let K1,…,Kn be a collection of non-empty subsets of Fq, and let

is an Fq-linear map and kerΨ=IX. Actually, this is a surjective map because for each i∈{1,…,m} there exists a polynomial fi such that fi(αj) is equal to 1, if j=i, or 0, if j≠i.

Let d be a nonnegative integer. In what follows we will denote by Fq[X1,…,Xn]≤d the Fq

-vector space formed by all polynomials of degree up to

d, together with the zero polynomial.

Let d be a nonnegative integer. The affine cartesian code (of order d) CX(d) defined over the sets K1,…,Kn is the image, by Ψ, of the polynomials in Fq[X1,…,Xn]≤d.

These codes appeared independently in [12] and [10] (in [10] in a generalized form). In the special case where K1=⋯=Kn=Fq we have the well-known generalized Reed-Muller code of order d. In [12] the authors prove that we may ignore, in the cartesian product, sets with just one element and moreover may always assume that 2≤d1≤⋯≤dn. The dimension and the minimum distance of these codes are known (see e.g. [12] or [10]).

In what follows we construct (r,δ)-locally recoverable codes which are subcodes of affine cartesian codes.

This system of equations can be rewritten as a matrix equation

which has a unique solution (b0,b1,…,br−1), since the square r×r matrix is a Vandermonde matrix. This allow us to determine f(β) for any β∈Iα. ∎

3 On the dimension of quasi affine cartesian codes

In this section we determine the dimension of (δ,s)-quasi affine cartesian codes, and we will need some facts about Gröbner basis which we recall below.

Let ≺ be a monomial order in (the set of monomials of) Fq[X1,…,Xn], i.e. ≺ is a total order, if M1≺M2 then MM1≺MM2 for all monomials M,M1,M2, and 1 is the least monomial. The greatest monomial appearing in a polynomial f is called the leading monomial of f and is denoted by LM(f).

To determine the dimension of D(δ,s)X(d) we make a reasoning similar to the one used to prove the above formulas.

Now, for 1≤d<~d (when d=0 we have D(δ,s)(0)≃Fq), we present a formula for the dimension of D(δ,s)(d) in terms of the dimension of certain affine cartesian codes, and for that we introduce some notation.

Observe that we may define the affine cartesian code CXs(d) as in Definition 2.2, except that now CXs(d) is defined over the sets K1,…,Ks−1, Ks+1,…,Kn.

Following [13], we say that the code D(δ,s)X(d) is optimal if its minimum distance attains the upper bound presented in the above theorem.

5 Further results on the minimum distance in a special case

In this section we assume that K1,…,Kn are fields such that K1⊂K2⊂⋯⊂Kn⊂Fq.

We write Aff\/(Fnq) for the affine group of Fnq, i.e. the transformations of Fnq of the type α⟼Aα+β, where A∈GL(n,Fq) and β∈Fnq.

The affine group associated to X is

and let φ=ψ|X. Then φ∈Aff\/(X) if and only if the following conditions are satisfied: