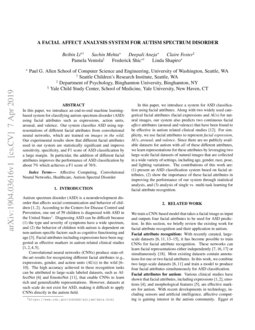 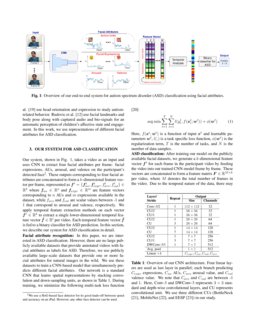 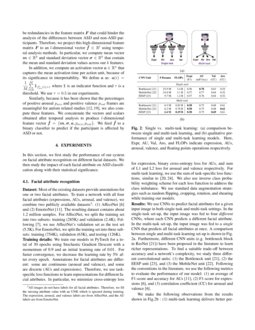 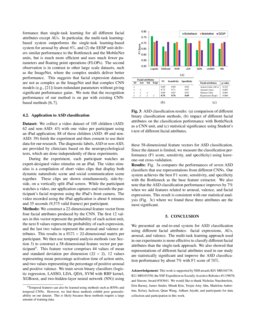 Autism spectrum disorder (ASD) is a neurodevelopment disorder that affects social communication and behavior of children [1, 2]. According to the Centers for Disease Control and Prevention, one out of 59 children is diagnosed with ASD in the United States111https://www.cdc.gov/ncbddd/autism/data.html. Diagnosing ASD can be difficult because (1) the type and severity of symptoms have a wide spectrum, and (2) the behavior of children with autism is dependent on non-autism-specific factors such as cognitive functioning and age [3]. Facial attributes including expressions have been suggested as effective markers in autism related clinical studies [1, 2, 4, 5].

Convolutional neural networks (CNNs) produce state-of-the-art results for recognizing different facial attributes (e.g., expressions, gender, and action units (AUs)) in the wild [6, 7, 8, 9, 10]. The high accuracy achieved in these recognition tasks can be attributed to large-scale labeled datasets, such as AffectNet [6] and EmotioNet [11], that enable CNNs to learn rich and generalizable representations. However, datasets at such scale do not exist for ASD, making it difficult to apply CNNs directly in the autism field.

In this paper, we introduce a system for ASD classification using facial attributes. Along with two widely used categorical facial attributes (facial expressions and AUs) for natural images, our system also predicts two continuous facial affect attributes (arousal and valence) that have been found to be effective in autism related clinical studies [12]. For simplicity, we use facial attributes to represent facial expression, AUs, arousal, and valence. Since there are no publicly available datasets for autism with all of these different attributes, we learn representations for these attributes by leveraging two large-scale facial datasets of natural images that are collected in a wide variety of settings, including age, gender, race, pose, and lighting variations. The contributions of this work are: (1) present an ASD classification system based on facial attributes, (2) show the importance of these facial attributes in improving the performance of our system through statistical analysis, and (3) analysis of single vs. multi-task learning for facial attribute recognition.

We train a CNN-based model that takes a facial image as input and outputs four facial attributes to be used for ASD prediction. In this section, we briefly review the existing work for facial attribute recognition and their application in autism.

, are effective markers for autism. With recent developments in technology, including sensors and artificial intelligence, affective computing is gaining interest in the autism community. Egger et al.

[19] use head orientation and expression to study autism-related behavior. Rudovic et al. [12] use facial landmarks and body pose along with captured audio and bio-signals for an automatic perception of children’s affective state and engagement. In this work, we use representations of different facial attributes for ASD classification.

3 Our System for ASD classification

Our system, shown in Fig. 1, takes a video as an input and uses CNN to extract four facial attributes per frame: facial expressions, AUs, arousal, and valence on the participant’s detected face222We use a HoG-based face detector for its good trade-off between speed and accuracy on an iPad. However, any other face detector can be used.. These outputs corresponding to four facial attributes are concatenated to form a k

ft={ftau,ftexpr,ftaro,ftval}∈Rk where fau∈Rn and fexpr∈Rm are feature vectors corresponding to n AUs and m expressions available in the dataset, while faro and fval

are scalar values between -1 and 1 that correspond to arousal and valence, respectively. We apply temporal feature extraction methods on each vector

. During training, we minimize the following multi-task loss function

Here, f(xi;wt) is a function of input xt and learnable parameters wt, l(.) is a task specific loss function, ϕ(wt) is the regularization term, T is the number of tasks, and N is the number of data samples.

ASD classification: After training our model on the publicly available facial datasets, we generate a k-dimensional feature vector ft for each frame in the participant video by feeding the video into our trained CNN-model frame by frame. These vectors are concatenated to form a feature matrix F∈RM×k per video, where M denotes the total number of frames in the video. Due to the temporal nature of the data, there may be redundancies in the feature matrix F that could hinder the analysis of the differences between ASD and non-ASD participants. Therefore, we project this high-dimensional feature matrix F to an l-dimensional vector ^f∈Rl using temporal analysis methods. In particular, we compute mean vector m∈Rk

σ∈Rk that contain the mean and standard deviation values across our k features.

In addition, we compute an activation vector a∈Rn that captures the mean activation time per action unit, because of its significance in interpretability. We define a as: a(i)=1MM∑t=01ftau(i)>τ where 1 is an indicator function and τ is a threshold. We use τ=0.5 in our experiments.

Similarly, because it has been shown that the percentages of positive arousal paro and positive valence pval frames are meaningful for autism related studies [19, 12], we also compute these features. We concatenate the vectors and scalars obtained after temporal analysis to produce l-dimensional feature vector ^f={m,σ,a,paro,pval}. We feed ^f to a binary classifier to predict if the participant is affected by ASD or not.

In this section, we first study the performance of our system on facial attribute recognition on different facial datasets. We then study the impact of each facial attribute on ASD classification along with their statistical significance.

Dataset: Most of the existing datasets provide annotations for one or two facial attributes. To train a network with all four facial attributes (expressions, AUs, arousal, and valence), we combine two publicly available datasets333All images do not have labels for all facial attributes. Therefore, we fill the missing attribute value with an UNK which is ignored during training. The expression, arousal, and valence labels are from AffectNet, and the AU labels are from EmotioNet.: (1) AffectNet [6] and (2) EmotioNet [11]. The resulting dataset contains about 1.2 million samples. For AffectNet, we split the training set into two subsets: training (285K) and validation (2.4K). Following [7], we use AffectNet’s validation set as the test set (5.5K). For EmotioNet, we split the training set into three subsets: training (754K), validation (63K), and testing (126K).

We train our models in PyTorch for a total of 30 epochs using Stochastic Gradient Descent with a momentum of 0.9 and an initial learning rate of 0.01. For faster convergence, we decrease the learning rate by 5% after every epoch. Annotations for facial attributes are different: some are continuous (arousal and valence), and some are discrete (AUs and expressions). Therefore, we use task-specific loss functions to learn representations for different facial attributes. In particular, we minimize cross-entropy loss for expression, binary cross-entropy loss for AUs, and sum of L1 and L2 loss for arousal and valence respectively. For multi-task learning, we use the sum of task-specific loss functions, similar to

. We also use inverse class probability weighting scheme for each loss function to address the class imbalance. We use standard data augmentation strategies such as random flipping, cropping, rotation, and shearing while training our models.

Results: We use CNNs to predict facial attributes for a given input image in both single-task and multi-task settings. In the single-task set-up, the input image was fed to four different CNNs, where each CNN predicts a different facial attribute. In the multi-task set-up, the input image was fed to a single CNN that predicts all facial attributes at once. A comparison between single and multi-task learning set-up is shown in Fig. 1(a). Furthermore, different CNN units (e.g. bottleneck block in ResNet [21]) have been proposed in the literature to learn richer representations. To find a suitable trade-off between accuracy and a network’s complexity, we study three different convolutional units: (1) the Bottleneck unit [21], (2) the EESP unit [23], and (3) the MobileNet unit [22]. Following the conventions in the literature, we use the following metrics to evaluate the performance of our model: (1) an average of F1-score and accuracy for AUs [11], (2) F1-score for expressions [6], and (3) correlation coefficient (CC) for arousal and valence [6].

, and (2) the EESP unit delivers similar performance to the Bottleneck and the MobileNet units, but is much more efficient and uses much fewer parameters and floating point operations (FLOPs). The second observation is in contrast to other large scale datasets, such as the ImageNet, where the complex models deliver better performance. This suggests that facial expression datasets are not as complex as the ImageNet and that complex CNN models (e.g.,

[21]) learn redundant parameters without giving significant performance gains. We note that the recognition performance of our method is on par with existing CNN-based methods [6, 7].

Dataset: We collect a video dataset of 105 children (ASD: 62 and non-ASD: 43) with one video per participant using an iPad application; 88 of these children (ASD: 49 and non-ASD: 39) finish the experiment and then consent to use their data for our research. The diagnostic labels, ASD or non-ASD, are provided by clinicians based on the neuropsychological tests, which are done independently of these experiments.

During the experiment, each participant watches an expert-designed video stimulus on an iPad. The video stimulus is a compilation of short video clips that display both dynamic naturalistic scene and social communication scene together. These clips are shown simultaneously, side-by-side, on a vertically split iPad screen. While the participant watches a video, our application captures and records the participant’s facial response using the iPad’s front camera. The video recorded using the iPad application is about 6 minutes and 35 seconds (9,575 valid frames) per participant.

Methods: We construct a 22-dimensional feature vector from four facial attributes produced by the CNN. The first 12 values in this vector represent the probability of each action unit, the next 8 values represent the probability of each expression, and the last two values represent the arousal and valence attributes. This results in a 9575×22-dimensional matrix per participant. We then use temporal analysis methods (see Section 3) to construct a 58-dimensional feature vector per participant444Temporal features can also be learned using methods such as RNNs and temporal CNNs. However, we find these methods exhibit poor generalizability on our dataset. This is likely because these methods require a large amount of training data.. This feature vector comprises 44 values of mean and standard deviation per dimension (22×2

Results: Fig. 2(a) compares the performances of seven ASD classifiers that use representations from different CNNs. Our system achieves the best F1 score, sensitivity, and specificity with the Bottleneck as the base feature extractor. We also note that the ASD classification performance improves by 7% when we add features related to arousal, valence, and facial expressions. This result is consistent with our statistical analysis (Fig. 2(c)) where we found these three attributes are the most significant.