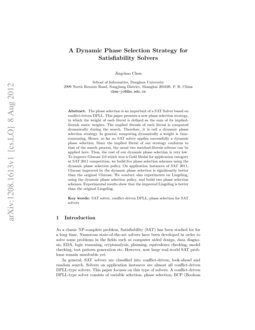 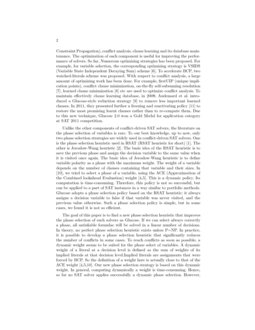 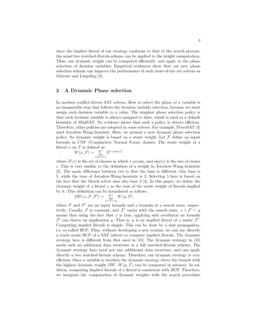 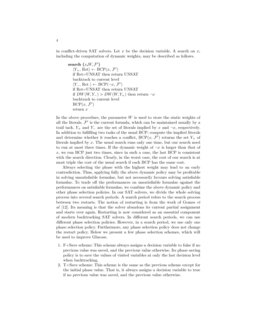 As a classic NP-complete problem, Satisfiability (SAT) has been studied for for a long time. Numerous state-of-the-art solvers have been developed in order to solve some problems in the fields such as computer aided design, data diagnosis, EDA, logic reasoning, cryptanalysis, planning, equivalence checking, model checking, test pattern generation etc. However, now large real-world SAT problems remain unsolvable yet.

In general, SAT solvers are classified into conflict-driven, look-ahead and random search. Solvers on application instances are almost all conflict-driven DPLL-type solvers. This paper focuses on this type of solvers. A conflict-driven DPLL-type solver consists of variable selection, phase selection, BCP (Boolean Constraint Propagation), conflict analysis, clause learning and its database maintenance. The optimization of each component is useful for improving the performance of solvers. So far, Numerous optimizing strategies has been proposed. For example, for variable selection, the corresponding optimizing strategy is VSIDS (Variable State Independent Decaying Sum) scheme

[6]. To accelerate BCP, two watched-literals scheme was proposed. With respect to conflict analysis, a large amount of optimizing work has been done. For example, firstUIP (unique implication points), conflict clause minimization, on-the-fly self-subsuming resolution [7], learned clause minimization [8] etc are used to optimize conflict analysis. To maintain effectively clause learning database, in 2009, Audemard et al. introduced a Glucose-style reduction strategy [9] to remove less important learned clauses. In 2011, they presented further a freezing and reactivating policy [11] to restore the most promising learnt clauses rather than to re-compute them. Due to this new technique, Glucose 2.0 won a Gold Medal for application category at SAT 2011 competition.

[1]. The other is Jeroslow-Wang heuristic [2]. The basic idea of the RSAT heuristic is to save the previous phase and assign the decision variable to the same value when it is visited once again. The basic idea of Jeroslow-Wang heuristic is to define variable polarity as a phase with the maximum weight. The weight of a variable depends on the number of clauses containing that variable and their sizes. In [10], we tried to select a phase of a variable, using the ACE (Approximation of the Combined lookahead Evaluation) weight [4, 5]. This is a dynamic policy. Its computation is time-consuming. Therefore, this policy is not so successful, but can be applied to a part of SAT instances in a way similar to portfolio methods. Glucose adopts a phase selection policy based on the RSAT heuristic: it always assigns a decision variable to false if that variable was never visited, and the previous value otherwise. Such a phase selection policy is simple, but in some cases, we found it is not so efficient.

In modern conflict-driven SAT solvers, How to select the phase of a variable is an inseparable step that follows the decision variable selection, because we must assign each decision variable to a value. The simplest phase selection policy is that each decision variable is always assigned to false, which is used as a default heuristic of MiniSAT. No evidence shows that such a policy is always efficient. Therefore, other policies are adopted in some solvers. For example, PrecoSAT [3] used Jeroslow-Wang heuristic. Here, we present a new dynamic phase selection policy. Its dynamic weight is based on a static weight. Let F define an input formula in CNF (Conjunctive Normal Form) clauses. The static weight of a literal x on F is defined as

where F(x) is the set of clauses in which x occurs, and size(c) is the size of clause c. This is very similar to the definition of a weight in Jeroslow-Wang heuristic [2]. The main difference between two is that the base is different. Our base is 5, while the base of Jeroslow-Wang heuristic is 2. Selecting 5 here is based on the fact that the March solver uses also base 5 [4]. In this paper, we define the dynamic weight of a literal x as the sum of the static weight of literals implied by it. This definition can be formulated as follows.

where F and F′ are an input formula and a formula at a search state, respectively. Usually, F is constant, and F′ varies with the search state. x∧F′⊢y means that using the fact that x is true, applying unit resolution on formula F′ can derive an implication y. That is, y is an implied literal of x under F′. Computing implied literals is simple. This can be done by a unit propagation, i.e. so-called BCP. Thus, without developing a new routine, we can use directly a ready-made BCP of a SAT solvers to compute implied literals. The dynamic strategy here is different from that used in [10]. The dynamic strategy in [10] needs such an additional data structure as a full watched-literals scheme. The dynamic strategy here need not any additional data structure, and can apply directly a two watched-literals scheme. Therefore, our dynamic strategy is very efficient. Once a variable is decided, the dynamic strategy elects the branch with the highest dynamic weight DW. W(y,F) can be computed in advance. In addition, computing implied literals of a literal is consistent with BCP. Therefore, we integrate the computation of dynamic weights with the search procedure in conflict-driven SAT solvers. Let x be the decision variable. A search on x, including the computation of dynamic weights, may be described as follows.

if Ret=UNSAT then return UNSAT

if Ret=UNSAT then return UNSAT

In the above procedure, the parameter W is used to store the static weights of all the literals. F′ is the current formula, which can be maintained usually by a trail tack. Y+ and Y− are the set of literals implied by x and ¬x, respectively. In addition to fulfilling two tasks of the usual BCP: compute the implied literals and determine whether it reaches a conflict, BCP(x, F′) returns the set Y+ of literals implied by x. The usual search runs only one time, but our search need to run at most three times. If the dynamic weight of ¬x is larger than that of x, we run BCP just two times, since in such a case, the last BCP is consistent with the search direction. Clearly, in the worst case, the cost of our search is at most triple the cost of the usual search if each BCP has the same cost.

To improve better the performance of such SAT solvers as Glucose, in our SAT solver, we select the phase of a variable in the following way.

We evaluated the new phase selection strategy, using the following experimental platform: Intel Core 2 Quad Q6600 CPU with speed of 2.40GHz and 2GB memory. This is a 32-bit machine. From our empirical results, this machine seems to be about half the speed of the experimental platform used by SAT 2011 competition. Therefore, we set the timeout for solving an instance to 9000 seconds, which is almost double that of SAT 2011 competition. The instances used in the experiment are from SAT 2011 competition. We use Glucose 2.0, which won a Gold Medal for application category in the SAT competition 2011, to test performance of the new phase selection strategy. The main different between our improved Glucose and the original Glucose is that the improved Glucose adopts the phase selection scheme given in the previous section. The preprocessing of the improved Glucose is the same as that of Glucose 2.0. Both solvers use SatElite for preprocessing.

Figures 1 shows a log-log scatter plot comparing the running times of Glucose 2.0 and the improved Glucose on application instances from SAT 2011. Each point corresponds to a given instance. The climax (9000,9000) means that the instances on that point were not solved by any of two solvers. As shown in Figures 1, many points are centralised at the nearby diagonal. This is because on about 50 instances, both solvers use the same phase selection policy. Points below the diagonal correspond to instances solved faster by Glucose 2.0. It is easy to see that the number of instances solved faster by Glucose 2. 0 is less than that solved faster by the improved Glucose. Figure 2 shows a cactus plot related to the comparison of the two solvers. Clearly, our phase selection strategy outperforms that of Glucose 2.0. In the cactus plot, our curve is always below Glucose 2.0. That is, in a given amount of time, we solved more instances than Glucose 2.0.

In the improved Lingeling, we select the phase of a variable in the following way.

Is a phase selection policy related to the other components such as the restart policy, the learnt clause management policy, etc? This is an open problem that is worth studying.