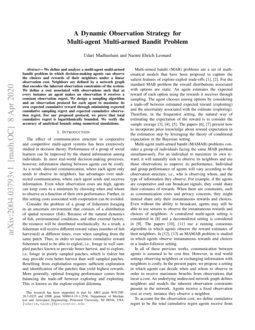 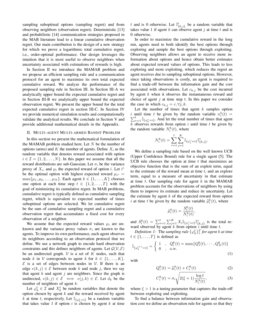 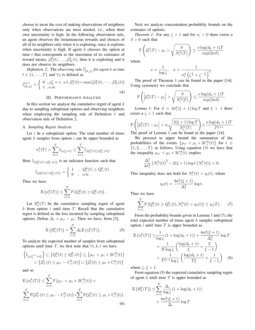 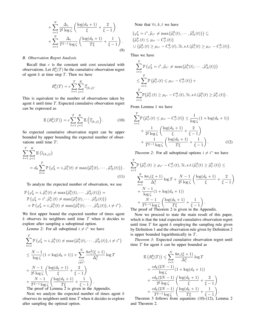 The effect of communication structure in cooperative and competitive multi-agent systems has been extensively studied in decision theory. Performance of a group of social learners can be improved by the shared information among individuals. In most real-world decision-making processes, however, information sharing between agents can be costly. As a result, directed communication, where each agent only needs to observe its neighbors, has advantages over undirected communication, where each agent sends and receives information. Even when observation costs are high, agents can keep costs to a minimum by choosing when and whom to observe as a function of their own performance. Further, in this setting costs associated with cooperation can be avoided.

Consider the problem of a group of fishermen foraging in an uncertain environment that consists of a distribution of spatial resource (fish). Because of the natural dynamics of fish, environmental conditions, and other external factors, the resource will be distributed stochastically. As a result, a fisherman will receive different reward values (number of fish harvested) at different times, even when sampling from the same patch. Thus, in order to maximize cumulative reward fishermen need to be able to exploit, i.e., forage in well sampled patches known to provide better harvest, and to explore, i.e, forage in poorly sampled patches, which is riskier but may provide even better harvest than well sampled patches. Benefiting from exploitation requires sufficient exploration and identification of the patches that yield highest rewards. More generally, optimal foraging performance comes from balancing the trade-off between exploring and exploiting. This is known as the explore-exploit dilemma.

Multi-armed bandit (MAB) problems are a set of mathematical models that have been proposed to capture the salient features of explore-exploit trade-offs [14, 13]

. For the standard MAB problem the reward distributions associated with options are static. An agent estimates the expected reward of each option using the rewards it receives through sampling. The agent chooses among options by considering a trade-off between estimated expected reward (exploiting) and the uncertainty associated with the estimate (exploring). Therefore, in the frequentist setting, the natural way of estimating the expectation of the reward is to consider the sample average

Multi-agent multi-armed bandit (MAMAB) problems consider a group of individuals facing the same MAB problem simultaneously. For an individual to maximize its own reward, it will naturally seek to observe its neighbors and use those observations to improve its performance. Individual and group performance of agents will vary according to the observation structure, i.e., who is observing whom, and the type of information they observe. For example, if the agents are cooperative and can broadcast signals, they could share their estimates of rewards. When there are constraints, such as communication costs and privacy concerns, they might instead share only their instantaneous rewards and choices. Even without the ability to broadcast, agents may still be able to use sensors to observe the instantaneous rewards and choices of neighbors. A centralized multi-agent setting is considered in [2] and a decentralized setting is considered in [4]. The papers [9, 8] use a running consensus algorithm in which agents observe the reward estimates of their neighbors. In [6, 10] an MAMAB problem is studied in which agents observe instantaneous rewards and choices in a leader-follower setting.

In all of these previous works, communication between agents is assumed to be cost free. However, in real world settings observing neighbors or exchanging information with neighbors is costly. In the present paper, we propose a setting in which agents can decide when and whom to observe in order to receive maximum benefits from observations that incur a cost. An underlying undirected network graph defines neighbors and models the inherent observation constraints present in the network. Agents receive a fixed observation cost at every instance they observe a neighbor.

To account for the observation cost, we define cumulative regret to be the total cumulative regret agents receive from sampling suboptimal options (sampling regret) and from observing neighbors (observation regret). Deterministic [10] and probabilistic [11] communication strategies proposed in the MAB literature lead to a linear cumulative observation regret. Our main contribution is the design of a new strategy for which we prove a logarithmic total cumulative regret, i.e., order-optimal performance. Our design leverages the intuition that it is most useful to observe neighbors when uncertainty associated with estimations of rewards is high.

In this section we present the mathematical formulation of the MAMAB problem studied here. Let N be the number of options (arms) and K the number of agents. Define Xi

as the random variable that denotes reward associated with option

i∈I={1,2,…,N}. In this paper we assume that all the reward distributions are sub-Gaussian. Let σi

be the variance proxy of

We assume that the expected reward values μi are unknown and the variance proxy values σi are known to the agents. To improve its own performance, each agent observes its neighbors according to an observation protocol that we define. We use a network graph to encode hard observation constraints and this defines neighbors of agents. Let G(V,E) be an undirected graph. V is a set of K nodes, such that node k in V corresponds to agent k for k∈{1,…,K}. E is a set of edges between nodes in V. If there is an edge e(k,j)∈E between node k and node j, then we say that agent k and agent j are neighbors. Since the graph is undirected, e(k,j)∈E⟺e(j,k)∈E. Let dk be the number of neighbors of agent k.

In order to maximize the cumulative reward in the long run, agents need to both identify the best options through exploring and sample the best options through exploiting. Observing neighbors allows an agent to receive more information about options and hence obtain better estimates about expected reward values of options. This leads to less exploring and more exploiting, which reduces the regret an agent receives due to sampling suboptimal options. However, since taking observations is costly, an agent is required to find a trade-off between the information gain and the cost associated with observations. Let ck,j be the cost incurred by agent k when it observes the instantaneous reward and choice of agent j at time step t. In this paper we consider the case in which ck,j=c,∀j,k.

We define a sampling rule based on the well known UCB (Upper Confidence Bound) rule for a single agent [3]. The UCB rule chooses the option at time t that maximizes an objective function that is the sum of an exploit term, equal to the estimate of the reward mean at time t, and an explore term, equal to a measure of uncertainty in that estimate at time t. Our sampling rule for agent k in the MAMAB problem accounts for the observations of neighbors by using them to improve its estimate and reduce its uncertainty. Let the estimate by agent k of the expected reward from option i at time t be given by the random variable ˆμki(t), where

and Ski(t)=∑tτ=1∑Kj=1XiI{φτj=i}Iτ{k,j} is the total reward observed by agent k from option i until time t.

where ξ>1 is a tuning parameter that captures the trade-off between exploring and exploiting.

To find a balance between information gain and observation cost we define an observation rule for agents so that they choose to incur the cost of making observations of neighbors only when observations are most needed, i.e., when their own uncertainty is high. In the following observation rule, an agent observes the instantaneous rewards and choices of all of its neighbors only when it is exploring, since it explores when uncertainty is high. If agent k chooses the option at time t that corresponds to the maximum of its estimates of reward means, ˆμk1(t),…,ˆμkN(t), then it is exploiting and it does not observe its neighbors.

Let i be a suboptimal option. The total number of times agent k samples from option i can be upper bounded as

Let Rks(T) be the cumulative sampling regret of agent k from option i until time T. Recall that the cumulative regret is defined as the loss incurred by sampling suboptimal options. Define Δi=μi∗−μi. Then we have, from [7],

To analyze the expected number of samples from suboptimal options until time T, we first note that ∀i,k,t we have

Next we analyze concentration probability bounds on the estimates of options.

The proof of Theorem 1 can be found in the paper [11]. Using symmetry we conclude that

We proceed to upper bound the summation of the probabilities of the events {μi∗<μi+2Cki(t)} for t∈{1,2,…,T} as follows. Using equation (3) we have that the inequality μi∗<μi+2Cki(t) implies

This inequality does not hold for Nki(t)>ηi(t), where

From the probability bounds given in Lemma 1 and (7), the total expected number of times agent k samples suboptimal option i until time T is upper bounded as

Recall that c is the constant unit cost associated with observations. Let Rko(T) be the cumulative observation regret of agent k at time step T. Then we have

This is equivalent to the number of observations taken by agent k until time T. Expected cumulative observation regret can be expressed as

To analyze the expected number of observation, we use

We first upper bound the expected number of times agent k observes its neighbors until time T when it decides to explore after sampling a suboptimal option.

For all suboptimal i≠i∗ we have

The proof of Lemma 2 is given in the Appendix.

Next we analyze the expected number of times agent k observes its neighbors until time T when it decides to explore after sampling the optimal option.

Note that ∀i,k,t we have

From Lemma 1 we have

For all suboptimal options i≠i∗ we have

The proof of Theorem 2 is given in the Appendix.

Note that for deterministic communication strategies [9, 10] the expected cumulative observation regret until time T for agent k is linear in T:

For the probabilistic observation strategy of [11] the expected cumulative observation regret until time T for agent k is linear in T:

where pk is the observation probability of agent k. Thus, our proposed sampling rule and observation rule outperform these strategies when there are cumulative observation costs.

In this section we present numerical simulation results for a network of 6 agents with underlying observation structure defined by the star graph: the center agent observes all other agents and all other agents only observe the center agent. Agents other than the center agent are interchangeable and their average regret and individual regret are the same. We present numerical simulations to evaluate the performance of the sampling rule and observation rule given by Definitions 1 and 2.

The 6 agents play the same MAB problem with 10 options. In all simulations the reward distributions are Gaussian with variance σi=5, i=1,…,10, and mean values:

Note that ∀i,k,t we have

Let i be a suboptimal option with highest estimated expected reward for agents k at time t. Then we have i=argmax{ˆμk1(t),⋯,ˆμkN(t)} and i≠i∗. If the agent k chooses option i∗ at time step t+1 we have Qki∗(t)>Qki(t). Thus we have ˆμki(t)>ˆμki∗(t) and Cki(t)<Cki∗(t).

Note that for some βki(t)>0 we have