In this work, a discriminatively learned CNN embedding is proposed for remote sensing image scene classification. Our proposed siamese network simultaneously computes the classification loss function and the metric learning loss function of the two input images. Specifically, for the classification loss, we use the standard cross-entropy loss function to predict the classes of the images. For the metric learning loss, our siamese network learns to map the intra-class and inter-class input pairs to a feature space where intra-class inputs are close and inter-class inputs are separated by a margin. Concretely, for remote sensing image scene classification, we would like to map images from the same scene to feature vectors that are close, and map images from different scenes to feature vectors that are widely separated. Experiments are conducted on three different remote sensing image datasets to evaluate the effectiveness of our proposed approach. The results demonstrate that the proposed method achieves an excellent classification performance. 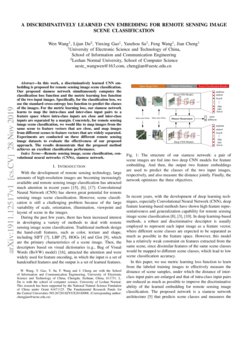 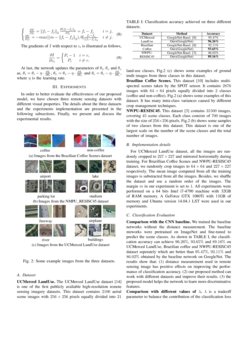 During the past few years, there has been increased interest in developing a variety of methods to deal with remote sensing image scene classification. Traditional methods design the hand-craft features, such as color, texture and shape, including SIFT[7], LBP[1017623], HOGs[4] and Gist [9], which are the primary characteristics of a scene image. Then, the descriptors based on visual dictionaries (e.g., Bag of Visual Words (BoVW) model)[16]

, attracted the attention and were widely used for feature encoding, in which the input is a set of handcrafted features and the output is a set of learned features. In recent years, with the development of deep learning techniques, especially Convolutional Neural Network (CNN), deep feature learning-based methods have shown high feature representativeness and generalization capability for remote sensing image scene classification

In this paper, we use metric learning loss function to learn from the labeled training images to effectively measure the distance of scene samples, under which the distance of inter-class input pairs are enlarged and that of intra-class input pairs are reduced as much as possible to improve the discriminative ability of the learned embedding for remote sensing image classification. The proposed network is a siamese network architecture [5] that predicts scene classes and measures the distance at the same time. Compared to the previous models, we take full advantages of the labeled training data in terms of pair-wise distance similarity and image classes. To summarize, our contributions are two-fold:

(1) We propose to use metric learning loss function to learn a discriminative CNN embedding by the siamese loss, which learns the class for each scene and penalizes the distance between the deep features and their corresponding labels.

The rest of this paper is organized as follows. Section II introduces the proposed method in detail. Section III presents the experimental results on three publicly available scene datasets. At last, we conclude our works in Section IV.

The goal of our proposed method is to extract the features from training images and compute the distance between images with a discriminative metric for accurate image classification. Fig.1 shows an overview of the siamese network for remote sensing image scene classification.

Our network is basically a convolutional siamese network, which consists of two sub-networks with shared weights. Given an input pair of scene images, the proposed network simultaneously predicts the classes and the distance measurement of the two input images.

As shown in Fig.1, the images are processed by a Convolutional Neural Network (CNN). The CNN involves many individual processing steps, so we refer to the complete CNN as a function, f=C(x,θc), that takes an image x as input and produces a vector f as output, where f is the vectorised representation of the CNN’s final layer activation maps and θc denotes ConvNets parameters to be learned. In this work, we use GoogleNet[12]

as the base CNN architecture, which was pre-trained on ImageNet

Our siamese network trains the feature extraction network to optimize both the classification loss to predict the scene classes and the distance learning loss to estimate similarity.

The first is the classification loss function, which classifies remote sensing images into one of

n different classes. The classification loss function is achieved by following the deep CNN with an n

-way softmax layer, which outputs a probability distribution over the

n classes. The network is trained to minimize the softmax function, or cross-entropy loss, which is denoted as,

where W is the softmax weight matrix, b is the bias matrix, and c is the target class, Pc is the predicted probablity, and f is the image feature vector, θi denotes the softmax layer parameters.

The second is the distance learning loss function, which encourages features extracted from scene images of the same classes to be similar and enlarges the margin between the features from different classes in the feature space. Given a pair of images (si,sj), where each image has been processed using the deep CNN feature extraction network to give image feature vectors, fi=C(si) and fj=C(sj), where C(⋅) is the feature extraction function defined by the CNN. The high-level feature from the fine-tuned CNN has shown a discriminative ability and it is more compact than the activations in the intermediate layers[2]. So we directly compares the high-level features fi, fj for the distance estimation. We can write the siamese network training objective as a function of the feature vectors fi and fj as follows,

where ||fi−fj||22 is the Euclidean distance between the feature vectors. When two images are from the same scene classes (i=j), the objective V encourages the features fi and fj to be close by minimizing the L2 distance between the two vectors. While for images from different scene classes (i≠j), it encourages the distance larger than a margin m. θv is the parameter to be learned in the above training objective function.

We can now define the overall training objective L for a single pair of images(si,sj), which jointly optimizes the classification loss function and the distance learning loss function to train the CNN for discriminative feature learning. The formulation is given as follows,

where λ is used for balancing the two loss functions.

Our goal is to learn the parameters θc in the feature extraction function C, while θi and θv are only parameters introduced to propagate the classification loss and the distance learning loss during the training stage. In the testing stage, only θc

is used for feature extraction. The parameters are updated by stochastic gradient descent.

Then the gradient of L with respect to fi and fj are given by,

The gradients of I with respect to zi is illustrated as follows,

At last, the network updates the parameters of θi, θv and θc as, θi=θi−η⋅∂L∂θi, θv=θv−η⋅∂L∂θv and θc=θc−η⋅∂L∂θc, where η is the learning rate.

In order to better evaluate the effectiveness of our proposed model, we have chosen three remote sensing datasets with different visual properties. The details about the three datasets and the experiments implementation are presented in the following subsections. Finally, we present and discuss the experimental results.

(a) shows some examples of this dataset. It has many intra-class variances caused by different crop management techniques.

NWPU-RESISC45. This dataset [3] contains 31500 images, covering 45 scene classes. Each class consists of 700 images with the size of 256×256 pixels. Fig.2 (b) shows some samples of two classes from this dataset. This dataset is one of the largest scale on the number of the scene classes and the total number of images.

For UCMerced LandUse dataset, all the images are randomly cropped to 227×227 and mirrored horizontally during training. For Brazillian Coffee Scenes and NWPU-RESISC45 dataset, we randomly crop images to 64×64 and 227×227 respectively. The mean image computed from all the training images is substracted from all the images. Besides, we shuffle the dataset and use a random order of the images. The margin m in our experiment is set to 1. All experiments were performed on a 64 bits Intel i7-4790 machine with 32GB of RAM memory. A GeForce GTX 1080Ti with 11GB of memory and Ubuntu version 14.04.1 LST were used in our experiments.

Comparison with the CNN baseline. We trained the baseline networks without the distance measurement. The baseline nteworks were pretrained on ImageNet and fine-tuned to predict the scene classes. As shown in TABLE I, the classification accuracy can achieve 96.26%, 93.65% and 89.16% on UCMerced LandUse, Brazilian coffee and NWPU-RESISC45 dataset seperately which are better than 95.47%, 92.11% and 86.02% obtained by the baseline network on GoogleNet. The results show that: (1) distance measurement used in remote sensing image has positive effects on improving the performance of classification accuracy. (2) our proposed method can work with different datasets and improve their results. (3) the proposed model helps the network to learn more discriminative features.

Feature embedding. We qualitatively evaluate our learned features to verify if it is a good generic feature. We extract the fully-connected layer features from test split of the three datasets. These features are then projected to 2-dimensional space using t-SNE[13]. Fig.4 shows the feature visualization on the learned embedding of our model and the baseline CNN. Under the single classification signal of cross-entropy loss, the features are less seperated than our proposed method with both classification loss and distance metric learning loss. If we only use the softmax loss, the resulting deeply learned features would contain large intra-class variations. While joint the softmax loss and the distance metric learning loss achieve good intra-class compactness and inter-class separability, which is very beneficial to the discriminative feature learning.