A Differential Invariant for Zooming

This paper presents an invariant under scaling and linear brightness change. The invariant is based on differentials and therefore is a local feature. Rotationally invariant 2-d differential Gaussian operators up to third order are proposed for the implementation of the invariant. The performance is analyzed by simulating a camera zoom-out. 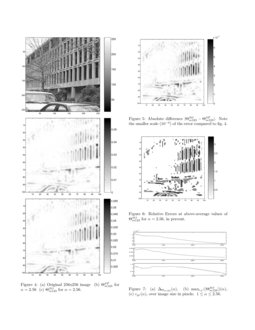 Geometrical invariants have been known for a long time, and they have been applied more recently to vision tasks [7, 9]. Differential invariants are of particular interest since they are local features and therefore more robust in the face of occlusion. Building on a suggestion by Schmid and Mohr [8], we propose an invariant with respect to the four aforementioned transformations, based on derivatives of Gaussians.

In the following, we restrict ourselves to 2-d objects, i.e. we assume that the objects of interest are not rotated outside the image plane, and that they are without significant depth so that the whole object is in focus simultaneously. The lighting geometry also remains constant. In other words, we allow only translation and rotation in the image plane, scaling that reduces the size of an object (zoom-out), and brightness changes by a constant factor. The zooming can be achieved by either changing the distance between object and camera or by changing the focal length.

where k,n∈N denote the order of the derivatives.

ΘSM is not invariant under linear brightness change. But such an invariance is desirable because it would ensure that properties that can be expressed in terms of the level curves of the signal are invariant [5]. A straightforward modification of Θ12 gives us the extended invariance: Let f(x)=kg(u)=kg(αx) where k is the brightness factor. Then f′(x)=kαg′(u),f′′(x) = kα2g′′(u),f′′′(x)=kα3g′′′(u). It can be seen that

is of little interest in computer vision.

An obvious shortcoming of Θ123, as well as of the other scale invariants discussed so far, is that they are undefined where the denominator is zero. Therefore, we modify Θ123 to be continuous everywhere:

If we are to apply eq. 2 to images, we have to generalize the formula to two dimensions. Also, images are given typically in the form of sampled intensity values rather than in the form of closed formulas where derivatives can be computed analytically. One way to combine filtering with the computation of derivatives can be provided by using Gaussian derivatives [1, 5, 8]. Let I1(x,y) and I2(u,v)=I2(αx,αy) be two images related by a scaling factor α. Then, according to Schmid and Mohr [8],

where the Gi1…in are partial derivatives of the 2-d Gaussian.

Then the gradient magnitude

where LoG is the Laplacian of Gaussian. QV stands for Quadratic Variation where we have taken the square root in order to avoid high powers. Schmid and Mohr also suggest what they call ν[2]:

Analogous to QV, we define a third order differential operator which we call Cubic Variation to be

By contrast, Schmid and Mohr use

With respect to the first criterion, the gradient returns a factor α1, as required for a first order differential operator, and the LoG and QV return a factor of α2, but ν[2] returns α4. This cannot be remedied by taking the square root since ν[2] is negative at some points. As for the third order operators, CV returns α3, while ν[6] and ν[8] return α6. We can take the square root of ν[6] but not of ν[8]. Where the second criterion is concerned, the LoG is preferable to QV since the LoG has both positive and negative coefficients, which makes it unique compared to all other operators. It is not obvious whether CV or √ν[6] has more discriminatory power, the difference between them seems negligible. √ν[6] has a slightly more compact support, but the coefficients are an order of magnitude smaller than those of CV and the other operators. Fig. 3 shows cross sections through the center of some of the operators in fig. 2. In our experiments, we used the Gradient, LoG, and CV as the differential operators to compute Θm123 according to eq. 2. Since Gradient and CV are always positive or zero, we have 0≤Θm123≤1.

The infinite integrals in eq. 3 can only be approximated by sampled, finite signals and filters. Furthermore, in cameras, where the number of pixels is constant, a world object is mapped into fewer pixels as the camera zooms out, leading to increasing spatial integration over the object and ultimately to aliasing. This means that the computation of Θm123 necessarily has an error. Equation 3 suggests a way to analyze the accuracy of Θm123 by simulating the zoom-out process. The left hand side can be thought of as a scaling by filtering (SF) process while the right hand side could be called scaling by optical zooming (SO) where we deal with a scaled, i.e. reduced image and an appropriately adjusted Gaussian operator. Here, scaling by optical zooming serves to simulate the imaging process as the camera moves away from an object. The two processes are schematically depicted in fig. 1.

The input to the simulation are 8-bit images taken by a real camera. The scaling factor α is a free parameter, but it is chosen such that the downsampling maps an integer number of pixels into integers. Both SF and SO start off with a lowpass filtering step. This prefiltering, implemented by a Gaussian with σ=α, improves the robustness of the computations significantly as derivatives are sensitive to noise. Also, lowpass filtering reduces aliasing at the subsequent downsampling step.

In SO, if the image function had a known analytical form, we could do the scaling by replacing the spatial variables x and y by αx and αy

. But images are typically given as intensity matrices. Therefore, the downscaling is done by interpolation, using cubic splines

111The Matlab function spline() is employed. We then apply the differential operators (Gradient, LoG, CV) with the appropriate value of ασ to the image and compute the invariant ΘSOm123. By contrast, in SF, the operators are applied to the original size image. The invariants are computed and then downscaled, using again cubic spline interpolation, to the same size as the image coming out of the SO process, so that ΘSOm123 and ΘSFm123 can be compared directly at each pixel.

Fig. 4 demonstrates the simulation process on a real image. The original image, 256×256, in the top row, is downscaled to 100×100, i.e. by a factor α=2.56. The second and third row show Θm123 as the results of SF and SO, respectively, at all pixel locations. Fig. 5 shows the absolute difference between ΘSFm123 and ΘSOm123, where the four boundary rows and columns have been set to zero in order to mask the boundary effects. Note that the difference is roughly a factor 100 smaller than the values of ΘSOm123 or ΘSFm123.

In order to quantify the error, we have varied α from 1 to 2.56, sampled such that the downscaled image has an integer pixel size, and computed the global absolute differences

where i,j range over all non-boundary pixels of the respective image, as well as the global relative error, in percent:

The graphs of these measures are shown in fig. 7. We see that the global relative error is less than 1.3% even as α becomes as large as 2.56. For the set of images we worked with, we have observed 0.5%<max(ϵgr)<2% for α<3. We also noted that without prefiltering ϵgr can become as large as 10%.

In the context of image retrieval, there remain some major issues to be addressed. First, the performance of the proposed invariant has to be analyzed on sequences of images taken at increasing object-camera distance, i.e. the simulation of the zoom-out process has to be replaced with a true camera zoom-out. Intrinsic limitations of the image formation process by CCD cameras [2] can be expected to somewhat decrease the accuracy of the invariant.

Second, a scheme for keypoint extraction must be devised. For efficiency reasons, matching will be done on those keypoints only. Ideally, the keypoints should be reliably identifiable, irrespective of scale.

Third, the proposed invariant must be combined with a scale selection scheme. Note that in the simulation above, we knew a priori the right values for α and therefore for ασ and the corresponding filter size. But such is not the case in general object retrieval tasks. Selecting stable scales is an active research area [5, 6].

The author would like to thank Bob Woodham and David Lowe for their valuable feedback.