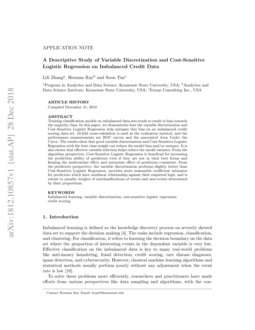 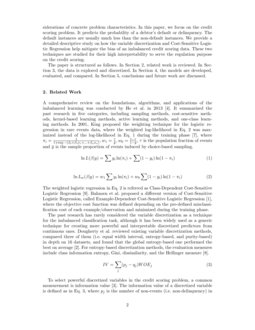 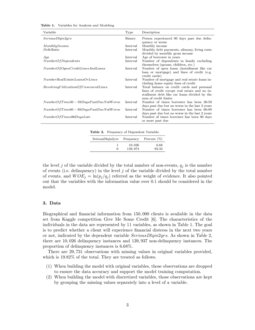 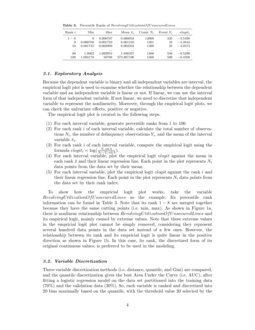 In this paper we extend the work of Owen (2007) by deriving a second ord...
Dorian Goldman, et al. ∙

Weight-of-evidence 2.0 with shrinkage and spline-binning

. The tasks include regression, classification, and clustering. For classification, it refers to learning the decision boundary on the data set where the proportion of interesting events in the dependent variable is very low. Effective classification on the imbalanced data is key to many real-world problems like anti-money laundering, fraud detection, credit scoring, rare disease diagnoses, spam detection, and cybersecurity. However, classical machine learning algorithms and statistical methods usually perform poorly without any adjustment when the event rate is low

To solve these problems more efficiently, researchers and practitioners have made efforts from various perspectives like data sampling and algorithms, with the considerations of concrete problem characteristics. In this paper, we focus on the credit scoring problem. It predicts the probability of a debtor’s default or delinquency. The default instances are usually much less than the non-default instances. We provide a detailed descriptive study on how the variable discretization and Cost-Sensitive Logistic Regression help mitigate the bias of an imbalanced credit scoring data. These two techniques are studied for their high interpretability to serve the regulation purpose on the credit scoring.

The paper is structured as follows. In Section 2, related work is reviewed. In Section 3, the data is explored and discretized. In Section 4, the models are developed, evaluated, and compared. In Section 5, conclusions and future work are discussed.

A comprehensive review on the foundations, algorithms, and applications of the imbalanced learning was conducted by He et al. in 2013 [4]

2 was maximized instead of the log-likelihood in Eq. 1 during the training phase [7], where πi=11+exp−(β0+β1x1+...+βnxn),w1=τ¯y,w0=1−τ1−¯y, τ is the population fraction of events and ¯y is the sample proportion of events induced by choice-based sampling.

The past research has rarely considered the variable discretization as a technique for the imbalanced classification task, although it has been widely used as a generic technique for creating more powerful and interpretable discretized predictors from continuous ones. Dougherty et al. reviewed existing variable discretization methods, compared three of them (i.e. equal width interval, entropy-based, and purity-based) in depth on 16 datasets, and found that the global entropy-based one performed the best on average [2]. For entropy-based discretization methods, the evaluation measures include class information entropy, Gini, dissimilarity, and the Hellinger measure [8].

There are 29,731 observations with missing values in original variables provided, which is 19.82% of the total. They are treated as follows.

The empirical logit plot is created in the following steps.

To show how the empricial logit plot works, take the variable RevolvingUtilizationOfUnsecuredLines as the example. Its percentile rank information can be found in Table 3.1. Note that its rank 1−8 are merged together because they have the same cutting points (i.e. min, max). As shown in Figure (a)a, there is nonlinear relationship between RevolvingUtilizationOfUnsecuredLines and its empirical logit, mainly caused by extreme values. Note that these extreme values in the empricial logit plot cannot be simply removed, considering they represent several hundred data points in the data set instead of a few ones. However, the relationship between its rank and its empricial logit is quite linear in the positive direction as shown in Figure (b)b. In this case, its rank, the discretized form of its original continuous values, is preferred to be used in the modeling.

Three variable discretization methods (i.e. distance, quantile, and Gini) are compared, and the quantile discretization gives the best Area Under the Curve (i.e. AUC), after fitting a logistic regression model on the data set partitioned into the training data (

70%) and the validation data (30%). So, each variable is ranked and discretized into 20 bins maximally based on the quantile, with the threshold value 20 selected by the same procedure above.

Information value is used as the measurement of the discrimination power of each individual variable after discretization, as shown in Table 3.2. Note that for some variables, the resulting number of bins is less than 20, because the bins with the same cutting points are merged together. And for the variable MonthlyIncome, there is 21 bins, because there are some missing values in it, which is seperated into one extra bin.

Logistic Regression and Class-Dependent Cost-Sensitive Logistic Regression are used as the methodology for their high interpretability. 10-fold cross-validation is used for the model evaluation. The performance measurements are ROC curve and AUC. The mean of AUCs of 10

-fold cross-validation is used to measure the model bias, while the standard deviation of AUCs of

To evaluate and compare the performance of the variable discretization and Class-Dependent Cost-Sensitive Logistic Regression, the following five models are built.

For Model 3, to avoid inducing the population proportion of events, which is used in Eq. 2

, we use a single hyperparameter to conduct the weighting, as shown in Eq.

The ROC curves of five models can be found in Figure 3. Because Model 5 ends up the same as Model 4, we only compare Model 4 with other models. For Model 1 and Model 2, they have similiar AUCs, but the ROC curves of Model 2 are closer to each other. It indicates that the variables with the information vlaue below 0.1 don’t make much contributions in this model. The ROC curves of Model 3 and Model 4 are much closer to the upper-left corner than the ones of Model 2. Moreover, for Model 4, the ROC curves on 10-fold cross-validation are closer to each other. This can be further confirmed by the mean and standard deviation of AUCs on 10-fold cross-validation in Table 4. The mean of AUCs for Model 1, Model 2, Model 3, and Model 4 is 0.68, 0.68, 0.80, and 0.83, respectively. Their standard deviation is 0.012, 0.008, 0.008, and 0.005, respectively.

The estimated coefficients of the models are also examined. The estimated parameters of Model 2 and Model 3 can be found in Table 4. Their values are different, as well as the sign of the variable NumberOfTime60−89DaysPastDueNotWorse. Its sign is negative in Model 2, while its sign is positive in Model 3. Its empirical logit plot in Figure (c)c shows the positive relationship, so the positive sign in Model 3 is consistent with its univariate effect. For other variables, the signs of estimated parameters are consistent with their univariate effect shown in their empirical logit plots in Figure (a)a, (b)b, and (d)d. The estimated parameters of Model 4 are not presented here, because it is space-consuming to list 48 dummy variables. But one-hot encoded discretized variables give more interpretable estimates, considering they are binary indicators.

In short summary, from Model 1 to Model 2, selecting only the interval form of variables with the information value over 0.1, the model variance is reduced. From Model 2 to Model 3, penalizing the misclassifications of events and non-events in different scales by running the Class-Dependent Logistic Regression, the model bias is reduced, and all multivariate effects become consistent with the univariate effects based on the signs of estimated parameters. From Model 2 to Model 4, using the discretized form of variables with the information value over 0.1, both the model bias and the model variance are reduced. And Model 4 is slightly better than Model 3. From Model 4 to Model 5, running the Class-Dependent Logistic Regression on the discretized variables, the model performance is the same.

To improve the model performance, two efforts have been made from the perspective of the predictors and the modeling algorithm respectively. Based on the ROC curves and AUC on 10-fold cross-validation, good variable discretization and Class-Dependent Cost-Sensitive Logistic Regression with the best class weight help mitigate the imbalance in the data and reduces the model bias and/or variance. We also observe that effective variable selection can help reduce the model variance. Moreover, Class-Dependent Cost-Sensitive Logistic Regression is beneficial for increasing the prediction power of predictors during the training phase even if those predictors are not transformed in their best forms and keeping the multivariate effect and univariate effect of predictors consistent.

On the other hand, the model with good discretized variables performs slightly better than Class-Dependent Cost-Sensitive Logistic Regression, provides more reasonable coefficient estimates, and is robust to penalty scales of misclassifications of events and non-events determined by their proportions. This indicates that we should always discretize the variables which show nonlinear relationship against their empirical logits.

In this study, we provide the detailed study of the variable discretization and Class-Dependent Cost Sensitive Logistic Regression on an imbalanced credit data set. In the future, we will consider more data sets, study concretely the relationship between the penalty scales and the proportions of events and non-events, and compare comprehensively with other classification algorithms like neural network and some sampling methods for imbalanced learning.