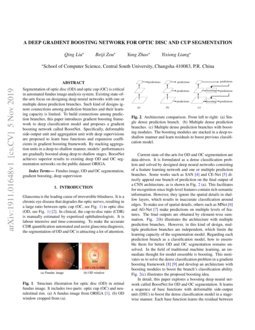 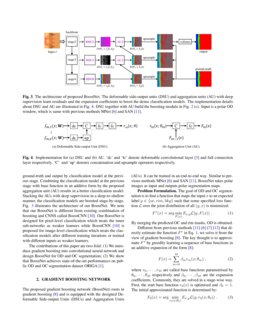 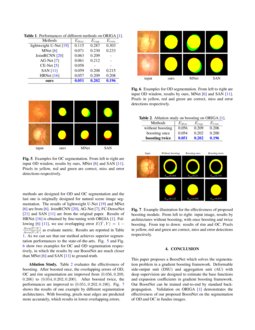 Glaucoma is the leading cause of irreversible blindness. It is a chronic eye disease that degrades the optic nerves, resulting in a large ratio between optic cup (OC, see Fig. 1) to optic disc (OD, see Fig. 1) [9]

. In clinical, the cup-to-disc ratio (CDR) is manually estimated by expertised ophthalmologists. It is labour intensive and time-consuming. To make the accurate CDR quantification automated and assist glaucoma diagnosis, the segmentation of OD and OC is attracting a lot of attention.

Current state-of-the-arts for OD and OC segmentation are data-driven. It is formulated as a dense classification problem and solved by designed deep neural networks consisting of a feature learning network and one or multiple prediction branches. Some works such as SAN [10] and CE-Net [5] directly append one branch of prediction on the final output of a CNN architecture, as is shown in Fig. 2 (a). This facilitates for recognition since high-level features contain rich semantic information. However, they ignore the spatial details in shallow layers, which results in inaccurate classification around edges. To make use of spatial details, others such as MNet [4] and AG-Net [20] make predictions on multiple levels of features. The final outputs are obtained by element-wise summation. Fig. 2

(b) illustrates the architecture with multiple prediction branches. However, in this kind of design, multiple prediction branches are independent, which limits the learning capacity of the segmentation model. Regarding each prediction branch as a classification model, how to ensemble them for better OD and OC segmentation remains unsolved. In the field of traditional machine learning, an immediate thought for model ensemble is boosting. This motivates us to solve the dense classification problem in a gradient boosting framework

[3] [14] and develop an architecture with boosting modules to boost the branch’s classification ability. Fig. 2(c) illustrates the proposed boosting idea.

The proposed gradient boosting network (BoostNet) roots in gradient boosting [3] and is equipped with the designed Deformable Side-output Units (DSUs) and Aggregation Units (AUs). It can be trained in an end-to-end way. Similar to previous methods MNet [4] and SAN [11], BoostNet takes polar images as input and outputs polar segmentation maps.

Problem Formulation. The goal of OD and OC segmentation is to find a function that maps the input x to an expected label y ∈{oc,rim,bkg}

such that some specified loss function

over the joint distribution of all

By merging the predicted OC and rim masks, OD is obtained.

Different from previous methods [11] [4] [20] [21] that directly estimate the function F∗ in Eq. 1, we solve it from the view of gradient boosting [3]. The key thought is to approximate F∗ by greedily learning a sequence of base functions in an additive expansion of the form [3]:

where r0,⋯,rM are called base functions parametrised by θ0,⋯,θM respectively and β0,⋯,βM are the expansion coefficients. Commonly, they are solved in a stage-wise way. First, the start base function r0(x) is optimised and β0=1. The initial approximated function is determined by:

Then for m=1,⋯,M, the approximated function is expressed as:

The base function rm(x;θm) and expansion coefficient βm are determined by:

Gradient Boosting Network (BoostNet). CNNs such as VGG [17], ResNet [6], DenseNet [7] and HRNet [18] produce feature maps in a stage-wise manner. It is in line with the way that gradient boosting learns base functions and coefficients. This naturally motivates us to leverage the CNN to solve the optimisation problem defined by Eq. 3 - Eq. 5.

Fig. 3 shows the proposed BoostNet. It consists of a backbone network, three deformable side-output units (i.e. DSU0, DSU1, DSU2) and two aggregation units (i.e. AU1 and AU2). The outputs of DSU0, DSU1, DSU2 are denoted as DOP0,DOP1,DOP2 and outputs of AU1, AU2 are denoted as BOP1,BOP2 respectively. We adopt HRNet [18] as the backbone network since it is able to learn powerful representation with high-resolution. HRNet[18] consists of four stages. Each has multiple feature learning branches and produces multiple groups of features with different spatial resolutions. From first to fourth stage, the number of branches ranges from one to four. For brevity, only feature maps from second stage to the last are shown. The backbone network together with DSUs are used to learns base functions and AUs are used to learn coefficients.

Deformable Side-output Unit (DSU). Fig. 4(a) shows the implementation of proposed DSU. It is attached on the end of a stage of the backbone network. Supposing the inputs of m−th DSU are fm(x)={fm,1(x),⋯,fm,k(x)} where k is the number of feature learning branches, a deformable convolutional layer [2] with parameters wdc is first attached on each feature learning branch and the outputs are upsampled to same spatial resolution. Then those upsampled features are concatenated and followed by two full connection layer. The first fc layer parametrised by wfuse fuses concatenated features. The second fc layer parametrised by wres learns the residual. Denoting parameters in backbone network as W, then parameters to be learned in a base function include θ={W,wdc1,⋯,wdck,wfuse,wres}.

Aggregation Unit with Deep Supervision. The AU is designed to learn the expansion coefficient in Eq. 4. Fig. 4(b) shows its implementation. It first concatenates the outputs by classification model at previous stage Fm−1(x) and the residual by base function rm(x;θm) at current stage, then a full connection layer with parameters is attached. With the supervision, coefficients are learned and a boosted segmentation model is obtained. In BoostNet, cross-entropy loss is used.

To show the effectiveness of out proposed BoostNet, we validate it on the public dataset ORIGA [19] and compare it with seven state-of-the-arts.

Data Preprocess and Augmentation. ORIGA dataset contains 650 pairs of fundus images and annotations by experts. Among ORIGA [19], 325 pairs are used for training and the rests for testing. Since we focus on OD regions, OD windows size of 640×640 are cropped from original images size of 3072×2048. Inspired by [15] [4] [11]

, a radial transform is first performed on OD windows in Cartesian coordinate system before feeding them into BoostNet. To increase the diversity of training data, three tricks are used to augment the training data in Cartesian system: (1) random OD windows cropping near the OD centre (

≤ 20 pixels of horizontal and vertical offsets to OD centre); (2) multi-scale augmentation (factors ranging from 0.8 to 1.2); (3) horizontal flipping. For training data, the OD centres are determined based on the ground-truth OD masks. For testing data, we train an HRNet [18] for OD segmentation with the training data of ORIGA and estimate OD centres according to the predicted OD masks. During testing phase, vertical flipping augmentation is used on polar OD windows.

Experimental Setting. Our BoostNet is built on the top of implementation of HRNet [18]

within the PyTorch framework. We initialize the weights in HRNet

with the pre-trained model on ImageNet

as evaluate metric. Results are reported in Table

1. As we can see that our method achieves superior segmentation performances to the state-of-the-arts. Fig. 5 and Fig. 6 show two examples for OC and OD segmentation respectively, in which the results by our BoostNet are much closer than MNet [4] and SAN [11] to ground-truth.

Ablation Study. Table 2 evaluates the effectiveness of boosting. After boosted once, the overlapping errors of OD, OC and rim segmentation are improved from (0.056,0.209, 0.206) to (0.054,0.202,0.200). After boosted twice, the performances are improved to (0.051,0.202,0.196). Fig. 7 shows the results of one example by different segmentation architectures. With boosting, pixels near edges are predicted more accurately, which results in lower overlapping errors.

This paper proposes a BoostNet which solves the segmentation problem in a gradient boosting framework. Deformable side-output unit (DSU) and aggregation unit (AU) with deep supervision are designed to estimate the base functions and expansion coefficients in gradient boosting framework. Our BoostNet can be trained end-to-end by standard back-propagation. Validation on ORIGA [19] demonstrates the effectiveness of our proposed BoostNet on the segmentation of OD and OC in fundus images.