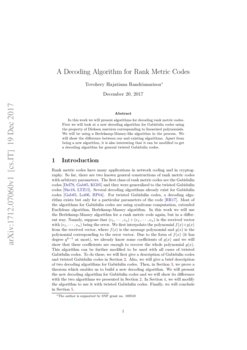 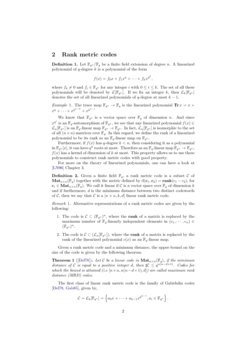 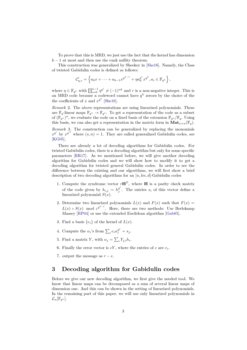 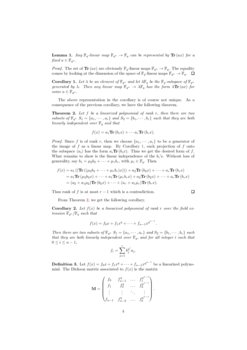 Fast Decoding of Codes in the Rank, Subspace, and Sum-Rank Metric

We deal with two problems related with the use of the Sakata's algorithm...
José Joaquín Bernal, et al. ∙

is the received vector with

being the error. We first interpolate the polynomial

where fk≠0 and fi∈Fqn for any integer i with 0≤i≤k. The set of all these polynomials will be denoted by L[Fqn]. If we fix an integer k, then Lk[Fqn] denotes the set of all linearized polynomials of q-degree at most k−1.

Furthermore, if f(x) has q-degree k<n, then considering it as a polynomial in Fqn[x], it can have qk roots at most. Therefore as an Fq-linear map Fqn→Fqn, f(x) has a kernel of dimension of k at most. This property allows us to use these polynomials to construct rank metric codes with good property.

For more on the theory of linearized polynomials, one can have a look at [LN96] Chapter 3.

Given a finite field Fq, a rank metric code is a subset C of Matn×n(Fq) together with the metric defined by d(c1,c2)=rank(c1−c2), for ci∈Matn×n(Fq). We call it linear if C is a vector space over Fq of dimension k and if furthermore, d is the minimum distance between two distinct codewords of C, then we say that C is a [n×n,k,d] linear rank metric code.

Alternative representations of a rank metric codes are given by the following:

Given a rank metric code and a minimum distance, the upper-bound on the size of the code is given by the following theorem.

Let C be a linear code in Matn×n(Fq), if the minimum distance of C is equal to a positive integer d, then ♯C≤qn(n−d+1). Codes for which the bound is attained (i.e [n×n,n(n−d+1),d]) are called maximum rank distance (MRD) codes.

The first class of linear rank metric code is the family of Gabidulin codes [Del78, Gab85], given by,

To prove that this is MRD, we just use the fact that the kernel has dimension k−1 at most and then use the rank nullity theorem.

This construction was generalized by Sheekey in [She16]. Namely, the Class of twisted Gabidulin codes is defined as follows:

where η∈Fqn with ∏n−1i=0ηqi≠(−1)nk and r is a non-negative integer. This is an MRD code because a codeword cannot have qk zeroes by the choice of the the coefficients of x and xqk [She16].

The construction can be generalized by replacing the monomials xqi by xqsi where (s,n)=1. They are called generalized Gabidulin codes, see [KG05].

Let λ be an element of Fqn and let λFq be the Fq-subspace of Fqn generated by λ. Then any linear map Fqn→λFq has the form λTr(ax) for some a∈Fqn.

The above representation in the corollary is of course not unique. As a consequence of the previous corollary, we have the following theorem.

Let f be a linearized polynomial of rank r, then there are two subsets of Fqn S1={a1,⋯,ar} and S2={b1,⋯,br} such that they are both linearly independent over Fq and that

Since f is of rank r, then we choose {a1,⋯,ar} to be a generator of the image of f as a linear map. By Corollary 1, each projection of f onto the subspace ⟨ai⟩ has the form aiTr(bix). Thus we get the desired form of f. What remains to show is the linear independence of the bi’s. Without loss of generality, say b1=μ2b2+⋯+μrbr, with μi∈Fq. Then

Thus rank of f is at most r−1 which is a contradiction. ∎

From Theorem 2, we get the following corollary.

Then there are two subsets of Fqn S1={a1,⋯,ar} and S2={b1,⋯,br} such that they are both linearly independent over Fq, and for all integer i such that 0≤i≤n−1,

Let f(x)=f0x+f1xq+⋯+fn−1xqn−1 be a linearized polynomial. The Dickson matrix associated to f(x) is the matrix

Another matrix related to linearized polynomials is the Moore matrix.

Given {a1,⋯,ak}⊂Fqn, the Moore matrix associated to the ai’s is the matrix

It is well known that the above Moore matrix is invertible if and only if the ai’s are linearly independent over Fq.

As a consequence of Corollary 2, we have the following theorem.

Let M1,⋯,Mn be the rows of the matrix M as in Definition 3.

Then we have the following property:

From Corollary 2, one sees that M=BA, where

Since the ai’s are linearly independent over Fq and the same for the b′is, we see that each r successive rows of B and any r successive columns of A constitute invertible matrices. All statements of the theorem follow from these facts. ∎

It is this theorem that is important to us. This enables us to build a new decoding algorithm.

We are now ready to explain the decoding algorithm. It consists of two steps. The first part is to interpolate the received message to construct the polynomial f(x)+g(x), where f(x) is the message polynomial and g(x) is the error polynomial. Since f(x) is of degree k−1 at most, we should know the coefficient of xqi in g(x), ∀i≥k. We will show that these coefficients are actually enough to recover the whole polynomial g(x) with some condition on the rank of g(x).

First of all, depending on the representation of the code, we need to do some interpolation to get a linearized polynomial form. Assume that our encoding was given by

Let U be the Moore matrix

where g(x)=∑gixqi is the error polynomial corresponding to e i.e. g(ai)=ei. Obviously, g(x) as an Fq-linear map has rank t<n−k+12.

Thus, we may compute U−1 in advance and then compute

This gives us f0+g0,⋯,fn−1+gn−1. Since fi=0,∀i≥k, we now know the values of gk,⋯gn−1. In the next step, we will use these coefficients to recover the other coefficients of g(x).

Let us have a look at the matrix M in Theorem 3 from the error polynomial g(x). We consider its submatrix

This gives us an equation of the form

where we may assume that λ0=1.

Notice that by the interpolation step, we know the coefficients gk,⋯,gn−1. Since we suppose that t<n−k+12, then k+2t−1≤n−1. Thus we know all the coefficients gk,⋯,gk+2t−1. And thus, by Theorem 3, this equation has unique solution in λ which we can compute. This can be done for example by using matrix inversion but that will take O(t3) operations.

Similarly to the case of Reed-Solomon codes, we can do better. Namely, we have here a Toeplitz-like matrix. And this can actually be solved by using a Berlekamp-Massey-like algorithm from [RP04]. To see this let ui=gqn−ii. Therefore, Equation (1) becomes

We summarize our decoding algorithm with the following steps in Algorithm 2. Suppose (r1,r2,⋯,rn) was received with an error of rank t<n−k+12. We already know the matrix U−1 in advance.

3.3 Complexity and comparison with other algorithms

We already saw two decoding algorithms in Section 2. As we can see, there is a difference in the first steps of these algorithms and our algorithm. Instead of using an ((n−k)×n) matrix for computing the syndromes, we use an (n×n) matrix to interpolate f+g. So in the first step, we have some extra O(nk) extra multiplications. The second steps are more or less the same as they are either Berlekamp-Massey or extended Eulidean algorithm. The last steps are where we may get the advantage as we directly use a linear recurrence to recover the error polynomial. For the other algorithms in Section 2, one first needs to compute the roots of some polynomials (error locator polynomial) before one can reconstruct the error vectors using some relations.

In this section, we will explain that our algorithm can also be modified to get a decoding algorithm for twisted Gabidulin codes. And in contrary to the algorithm in [RR17], we can do it for any parameters. We assume that the original message was given by

After the interpolation step, we get the polynomial f(x)+g(x). In opposite to the case of Gabidulin codes, we do not know the value of gk from this. However the problem we are faced remains similar. We want to find a linear relations between the rows of

where we know the values gk+1,⋯,gn−1 and ηgqr0−gqk. We will see that we still can solve this problem. We have an equation of the form

Notice that we introduce one more columns in the equation. Again, by assumption, we have 2t<n−k+1. Thus k+2t≤n. If k+2t<n, then a Berlekamp-Massey algorithm using the columns of the previous matrix except the last column is enough to compute the λi’s. If k+2t=n, then the equation becomes,

where two entries in terms of gk and g0 are unknown.

If we use the columns of the matrix except the first and last columns, then we should have an underdetermined system of linear equations whose solution space is of dimension two. We assume that two linearly independent solutions are λ and λ′. They can be found using the Berlekamp-Massey like algorithm again. Thus a solution of equation (3) is of the form λ+Aλ′ for some A∈Fqn. Using this with the first column and the last column, we get two equations. Furthermore, we also know ηgqr0−gk. So in total we get a system of three equations with three unknowns,

To solve the system, we use the third equation in the two first equations and we get

with the si’s known. We can further reduce this into one variable equation of the form, for some integer l,

We want to point out that this form of equation was also obtained in [RR17]. However, in our case here, we are sure that any solution would give us the closest codeword to the received message. We have now reduced the problem to solving the polynomial equation of the form

First of all, it is easy to show that if we get A from P(A), then we can use equation (5) to get g0. And we use equation (4) to get gk. These will give us the error polynomial g(x) with the recurrence relation from equation (3). So, normally, there should be only one unique solution for A. Now the question is how do we solve the equation P(A)=0? Any of the three cases which produce multiple solutions should be ruled out. The first case of P(A) is easy to solve. The two last cases reduce to polynomials of the form

The number of roots of such polynomials was studied in [Blu04]. Here we will give a method to find these roots.

The converse is also true. So, to get the root of P(X), we just need to factor the linearized polynomial xq2l+axq+bx. In case this polynomial admits a root x0 in Fqn then we just take y2=xq−10. Otherwise, we will need to use a factorization algorithm like in [Gie98].

Once A is computed, we can compute g0 and gk. Then we continue the decoding algorithm with the same methods as with the Gabidulin codes.

These algorithms can be easily modified to get a decoding algorithm for generalized (twisted) Gabidulin codes. Namely instead of working with the field automorphism xq, we work with automorphisms of the form xqs.

Finally, we think that it is possible to get a version of our algorithm for Reed-Solomon codes. Namely we can use an equivalent of the Dickson matrix. In the case of Reed-Solomon codes, we have a circulant matrix. And a theorem of König-Rados gives a relation between the number of non-zero roots of a polynomial and the rank of some circulant matrix, see [LN96], Chapter 6, Section 1. It is known that the most expensive steps in the decoding of Reed-Solomon codes is finding roots of the error locator polynomials. This can be avoided in our algorithm.

I would like to thank Anna-Lena Horlemann-Trautmann and Joachim Rosenthal for their valuable comments and suggestions on this work.