A Darwin Time Domain Scheme for the Simulation of Transient Quasistatic Electromagnetic Fields Including Resistive, Capacitive and Inductive Effects

The Darwin field model addresses an approximation to Maxwell's equations where radiation effects are neglected. It allows to describe general quasistatic electromagnetic field phenomena including inductive, resistive and capacitive effects. A Darwin formulation based on the Darwin-Ampère equation and the implicitly included Darwin-continuity equation yields a non-symmetric and ill-conditioned algebraic systems of equations received from applying a geometric spatial discretization scheme and the implicit backward differentiation time integration method. A two-step solution scheme is presented where the underlying block-Gauss-Seidel method is shown to change the initially chosen gauge condition and the resulting scheme only requires to solve a weakly coupled electro-quasistatic and a magneto-quasistatic discrete field formulation consecutively in each time step. Results of numerical test problems validate the chosen approach. 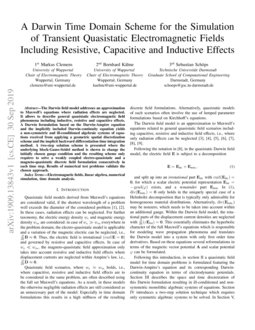 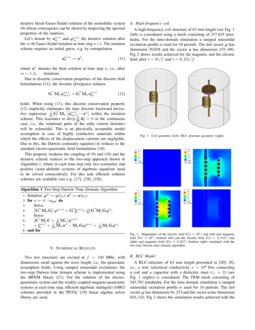 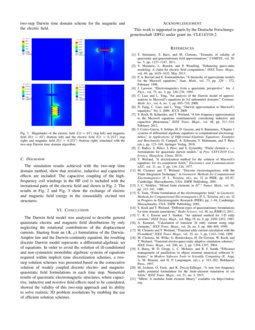 Quasistatic field models derived from Maxwell’s equations are considered valid, if the shortest wavelength of a problem well exceeds the diameter of the considered problem [1], [2]. In these cases, radiation effects can be neglected. For further taxonomy, the electric energy density we and magnetic energy density wm are considered: in case of we≫wm everywhere in the problem domain, the electro-quasistatic model is applicable and a variation of the magnetic electric can be neglected, i.e., ∂∂tB≈0. Thus, the electric field is irrotational (curlE=0) and governed by resistive and capacitive effects. In case of we≪wm, the magneto-quasistatic field approximation only takes into account resistive and inductive field effects where displacement currents are neglected within Ampère’s law, i.e., ∂∂tD≈0.

Quasistatic field scenarios, where we≈wm holds, i.e., where capacitive, resistive and inductive field effects are to be considered in the same problem, are often described using the full set Maxwell’s equations. As a result, in these models the otherwise negligible radiation effects are still considered as an unnecessary part of the model. Especially in time domain formulations this results in a high stiffness of the resulting discrete field formulations. Alternatively, quasistatic models of such scenarios often involve the use of lumped parameter formulations based on Kirchhoff’s equations.

The Darwin field model is an approximation to Maxwell’s equations related to general quasistatic field scenarios including capacitive, resistive and inductive field effects, i.e., where only radiation effects can be neglected [3, 4, 5, 6, 7, 8, 9].

Following the notation in [8], in the quasistatic Darwin field model, the electric field E is subject to a decomposition

This essentially eliminates the hyperbolic character of the full Maxwell’s equations which is responsible for modeling wave propagation phenomena and translates the Darwin model into a system with only first order time derivatives. Based on these equations several reformulations in terms of the magnetic vector potential

A and scalar potential φ can be formulated.

Following this introduction, in section II a quasistatic field model for time domain problems is formulated featuring the Darwin-Ampère’s equation and its corresponding Darwin-continuity equation in terms of electrodynamic potentials. Section III describes the space and time discretzation of this Darwin formulation resulting in ill-conditioned and non-symmetric monolithic algebraic systems of equations. Section IV introduces a two-step solution technique which requires only symmetric algebraic systems to be solved. In Section V, numerical test results are shown, including a discussion of the results, followed by a conclusion.

where ν is the reluctivity, κ the specific electric conductivity, ε the permittivity and Js denotes a transient source current density.

For the solution of (3) an additional equation is required to describe the relation of the magnetic vector potential A and the electric scalar potential φ. Due to the gauge invariance of the Darwin field model, various Darwin formulations can be derived [4, 8, 9]. If non-homogeneous material distributions need to be considered in the field model, the coupling of A and φ in (3) by use of the implicitly contained continuity equation appears as an obvious choice. Left application of the divergence operator to the Darwin-Ampère equation (3) yields a Darwin-model continuity equation [7]

It should be noted, that (4) is not identical to the original continuity equation divJ+∂∂tρ=0 related to the full Maxwell model, where ρ is the electric space charge. Including the Gauß’ law, the full Maxwell model continuity equation contains the expression ε∂2∂t2(A) related to the rotational parts of the displacement currents. These are specifically omitted within the Darwin model.

For the general case of non-homogeneous material distributions, a spatial discretization to the equations (3) and (4) is considered following [7]. The application of a mimetic discretization scheme as e.g. the finite integration technique (FIT) [10, 11], Whitney finite element method (WFEM) [12] or the cell method [13] yields the systems of matrix equations

is the degrees of freedom (dof) vector related to the magnetic vector potential,

φ is the dof vector of electric nodal scalar potentials, C is the discrete curl operator matrix, G and G⊤ are discrete gradient and (negative) divergence operator matrices. The matrices Mν,Mκ,Mε are the (possibly nonlinear) discrete material matrices of reluctivities, conductivities and permittivities, respectively, and the construction of these discrete Hodge operators depends on the specific discretization scheme.

While the non-symmetry of the block matrices in (7) can be partially eliminated, the presence of metallic objects in the problem domain will result in large differences in the order of magnitude of the entries.

A time discrete Darwin model based on the monolithic time domain formulation (7) results from the application of e.g. a first order convergent Euler backward differentiation (BDF1) formula [14] with a unconditionally stable time step Δt:=tn+1−tn. With Mσ:=Mκ+1ΔtMε the implicit time stepping scheme requires to solve the algebraic system of equations

for each time step and Newton iteration in case on nonlinear material laws. The real-valued system matrix is non-symmetric and can not be symmetrized; it is singular, if Mκ is singular. In [14] the system (8) is additionally regularized assuming a non-physical conductivity in the non-conductive regions of the simulation problem. The system matrices of the monolithic time discrete algebraic systems of equations (8) can be extremely ill-conditioned due to their off-diagonal matrix blocks with entries varying by different orders of magnitude. In [14] a direct solver based on sparse LU-decomposition was used for a discrete problem with a total number of only 12,101 dofs.

Rewriting the mutually coupled equations (5) and (6) into

This motivates adopting a strong coupled iteration approach for the solution of the time and space discretized reformulations of (9) and (10). This approach is identical to an iterative block-Gauss-Seidel solution of the monolithic system (8) whose convergence can be shown by inspecting the spectral properties of the matrices.

Let’s denote by an+1m and φn+1m the iterative solution after the m-th Gauss-Seidel iteration at time step n+1. The iteration scheme requires an initial guess, e.g. by extrapolation

where an denotes the final solution at time step n, i.e., after m=1,2,… iterations.

holds. When using (11), this discrete conservation property (12) implicitly eliminates the time discrete backward derivative expression 1ΔtG⊤Mκ[an+1m+1−an] within the iteration scheme. This translates to div(κ∂∂tA)=0 in the continuous case, i.e., the rotational parts of the eddy current densities will be solenoidal. This is an physically acceptable model assumption in case of highly conductive materials within which the effects of the displacement currents are negligible. Due to this, the Darwin continuity equation (4) reduces to the standard electro-quasistatic field formulation [18].

This property weakens the coupling of (9) and (10) and the iterative scheme reduces to the two-step approach shown in Algorithm 1, where in each time step only two symmetric and positive (semi-)definite systems of algebraic equations need to be solved consecutively. For this task efficient solution schemes are available (see e.g. [17, 18, 19]).

A high-frequency coil structure of 63 mm length (see Fig. 1 (left) is considered using a mesh consisting of 237,835 tetrahedra. For the time-domain simulation a ramped sinusoidal excitation profile is used for 10 periods. The dof vector φ has dimension 39,038 and the vector a has dimension 278,090. Fig 2 shows results achieved for the magnetic and the electric field after t=91/f and t=9,251/f.

A RLC-structure of 63 mm length presented in [20, 9], i.e., a wire (electrical conductivity κ=106 S/m connecting a coil and a capacitor with a dielectric inset (εr=2) (see Fig. 1 (right)) is considered. The FEM mesh consisting of 543,783 tetrahedra. For the time-domain simulation a ramped sinusoidal excitation profile is used for 10 periods. The dof vector φ has dimension 88,273 and the vector a has dimension 633,542. Fig 3 shows the simulation results achieved with the two-step Darwin time domain scheme for the magnetic and the electric field.

The simulation results achieved with the two-step time domain method, show that resistive, inductive and capacitive effects are included: The capacitive coupling of the high-frequency coil windings in the HF coil is included with the irrotational parts of the electric field and shown in Fig. 2. The results in Fig. 2 and Fig. 3 show the exchange of electric and magnetic field energy in the sinusoidally excited test structures.

The Darwin field model was analyzed to describe general quasistatic electric and magnetic field distributions by only neglecting the rotational contributions of the displacement currents. Starting from an (A,φ) formulation of the Darwin-Ampère law and the Darwin-continuity equation, the resulting discrete Darwin model represents a differential-algebraic set of equations. In order to avoid the solution of ill-conditioned and non-symmetric monolithic algebraic systems of equations required within implicit time discretization schemes, a two-step solution schemes was presented based on the consecutive solution of weakly coupled discrete electro- and magneto-quasistatic field formulations in each time step. Numerical results of quasistatic electromagnetic structures, where capacitive, inductive and resistive field effects need to be considered, showed the validity of this two-step approach and its ability to solve realistic 3D problem resolutions by enabling the use of efficient solution schemes.

This work is supported in parts by the Deutsche Forschungsgemeinschaft (DFG) under grant no. CLE143/10-2.