Recently, joint registration and segmentation has been formulated in a deep learning setting, by the definition of joint loss functions. In this work, we investigate joining these tasks at the architectural level. We propose a registration network that integrates segmentation propagation between images, and a segmentation network to predict the segmentation directly. These networks are connected into a single joint architecture via so-called cross-stitch units, allowing information to be exchanged between the tasks in a learnable manner. The proposed method is evaluated in the context of adaptive image-guided radiotherapy, using daily prostate CT imaging. Two datasets from different institutes and manufacturers were involved in the study. The first dataset was used for training (12 patients) and validation (6 patients), while the second dataset was used as an independent test set (14 patients). In terms of mean surface distance, our approach achieved 1.06 ± 0.3 mm, 0.91 ± 0.4 mm, 1.27 ± 0.4 mm, and 1.76 ± 0.8 mm on the validation set and 1.82 ± 2.4 mm, 2.45 ± 2.4 mm, 2.45 ± 5.0 mm, and 2.57 ± 2.3 mm on the test set for the prostate, bladder, seminal vesicles, and rectum, respectively. The proposed multi-task network outperformed single-task networks, as well as a network only joined through the loss function, thus demonstrating the capability to leverage the individual strengths of the segmentation and registration tasks. The obtained performance as well as the inference speed make this a promising candidate for daily re-contouring in adaptive radiotherapy, potentially reducing treatment-related side effects and improving quality-of-life after treatment. 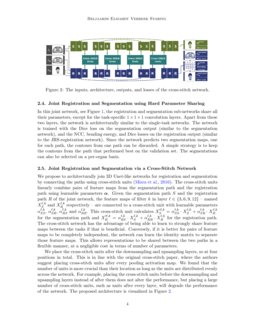 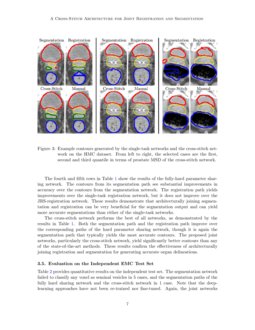 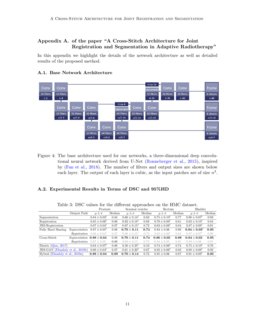 Adaptive image-guided radiation therapy aims to adapt the radiation dose to the daily anatomy of the patient. When executed properly, this may allow the use of smaller safety margins in radiotherapy and thus reduce the exposure of surrounding healthy tissue to radiation, thereby potentially reducing treatment-related side effects and improving quality of life after treatment. To enable such an adaptive treatment cycle it is required to re-image the patient on a daily basis, and subsequently re-contour the tumor and organs-at-risk. Since contouring takes a substantial amount of time by highly qualified radiation oncologists, adaptive treatment by manual procedures is generally infeasible. Thus, automating the procedure is crucial. The two prevalent methods for automatically contouring medical images are image segmentation and contour propagation using registration. In the context of adaptive image-guided radiotherapy, registration-based methods have the advantage of using prior knowledge of the patient’s anatomy in the form of the manually delineated planning scan, and being able to accurately deform low-contrast structures that are hard to identify using nearby higher-contrast structures. Image segmentation has advantages of its own, most notably the ability to accurately contour organs that drastically vary in shape between visits, such as the bladder.

In an attempt to exploit the unique advantages of both methods, approaches for joint registration and segmentation (JRS) have been proposed. Earlier methods performed joint registration and segmentation using for example active contours [Yezzi et al.(2003)Yezzi, Zöllei, and Kapur] or Bayesian models [Pohl et al.(2006)Pohl, Fisher, Grimson, Kikinis, and Wells]

. More recently, convolutional neural networks have become prevalent in medical imaging due to the rapid advancements in machine learning. Registration networks can now match the accuracy of iterative approaches, and segmentation networks have already been found to perform better than their conventional counterparts

In this work we propose to join registration and segmentation further by merging the two tasks at the architectural level rather than only through the loss function, using concepts from the field of multi-task learning [Ruder(2017)]. In our novel approach, a single neural network is trained to both propagate contours through image registration and generate contours through image segmentation at the same time. We demonstrate that joint architectures outperform single-task segmentation and registration networks, and we show that our approach generates more accurate organ delineations than state-of-the-art methods on both our validation set and an independent test set of prostate CT scans in terms of median MSD.

We use a 3D deep convolutional neural network derived from the U-Net [Ronneberger et al.(2015)Ronneberger, Fischer, and Brox] and inspired by [Fan et al.(2018)Fan, Cao, Yap, and Shen] as a base architecture for all networks presented in this paper. The network uses 3×3×3

convolution layers without padding. LeakyReLU and batch normalization are applied after each convolution layer. Strided convolutions are used for downsampling in the contracting path, and upsampling layers are used for the expansive path. The network has three output resolutions and is deeply supervised at each resolution. At the lower resolution the network can focus on large organs or large deformations and vice versa at higher resolutions. Given an input patch of size

as input and establishes the correspondence between the two images in the form of a Deformation Vector Field (DVF,

ϕpred). For this purpose, it is crucial that corresponding anatomical features in the two scans fit inside the network’s field of view, therefore the images have been affinely aligned beforehand. The predicted DVF ϕpred is then used to warp Im such that ideally, the warped moving image Iwarpedm is identical to If. The registration network is trained using the Normalized Cross-Correlation (NCC) loss that quantifies the dissimilarity between Iwarpedm and If, and the bending energy loss as a regularization term to encourage smoothness of ϕpred.

2.3 Joining Registration and Segmentation via the Loss

Similar to previous work [Elmahdy et al.(2019b)Elmahdy, Wolterink, Sokooti, Išgum, and Staring], the network in this approach joins registration and segmentation through the loss function. The network is relatively similar to the registration network discussed in the previous section, with the addition that it also takes Sm as input and is jointly trained using a segmentation Dice loss in addition to the NCC and bending energy losses. This Dice loss penalizes discrepancies between the fixed ground truth segmentation Sf and the warped moving segmentation Swarpedm.

2.5 Joint Registration and Segmentation via a Cross-Stitch Network

for the registration path. The cross-stitch network has the advantage of being able to learn to strongly share feature maps between the tasks if that is beneficial. Conversely, if it is better for pairs of feature maps to be completely independent, the network can learn the identity matrix to separate those feature maps. This allows representations to be shared between the two paths in a flexible manner, at a negligible cost in terms of number of parameters.

We implemented the networks using TensorFlow

√2 times as many) for the other networks in order to ensure that each network has approximately the same number of trainable parameters, namely 7.8⋅105. The patches were sampled equally from the organs-at-risk, the targets, and the remainder of the abdomen. We used the RAdam [Liu et al.(2019)Liu, Jiang, He, Chen, Liu, Gao, and Han] optimizer with a learning rate of 10−4. The networks were trained for 200,000 iterations with an initial batch size of 2. In each batch, the training samples are doubled by switching the role of the fixed and moving patches, resulting in an effective batch size of four. The weights of the Dice and NCC losses were set to 1 and that of the bending energy loss to 0.5. For the total loss, all resolutions are weighted equally, namely 13 each. Training, validation and testing were performed on a Nvidia GTX1080 Ti GPU with 11 GB of memory.

The networks were evaluated in terms of their Mean Surface Distance (MSD) between the predicted segmentations and ground truth contours. The appendix contains results in terms of the DSC and the 95% Hausdorff Distance (HD).

We compare the proposed approach to three state-of-the-art methods in abdominal CT radiotherapy: one iterative method, one deep learning method and one hybrid method.

The inference speed is less than a second for the deep learning methods, and in the order of minutes for the iterative and hybrid approaches.

3.4 Evaluation of Architectures on the HMC Dataset

Quantitative results are given in Table 1, and example results in Figure 3. The first two rows in Table 1

The results from the loss-joined JRS-registration network are shown in the third row of Table 1. It is clear that the additional segmentation loss during training improves the registration quality significantly.

The cross-stitch network performs the best of all networks, as demonstrated by the results in Table 1. Both the segmentation path and the registration path improve over the corresponding paths of the hard parameter sharing network, though it is again the segmentation path that typically yields the most accurate contours. The proposed joint networks, particularly the cross-stitch network, yield significantly better contours than any of the state-of-the-art methods. These results confirm the effectiveness of architecturally joining registration and segmentation for generating accurate organ delineations.

provides quantitative results on the independent test set. The segmentation network failed to classify any voxel as seminal vesicles in 5 cases, and the segmentation paths of the fully hard sharing network and the cross-stitch network in 1 case. Note that the deep-learning approaches have not been re-trained nor fine-tuned. Again, the joint networks outperform the single-task networks as well as the state-of-the art methods in terms of the median values that are less influenced by outliers. The mean values are relatively high compared to the median values. This discrepancy can be explained by the intensity variations between the population of the training set and test set causing more outliers.

Evaluation on a validation set and an independent test set demonstrated that the proposed joining of segmentation and registration significantly outperforms their single-task counterparts. On the validation set the proposed approach outperformed existing methods, sometimes by a margin. On the independent test set existing methods achieved better mean values for the prostate and seminal vesicles, while for the rectum the proposed methods performed better. For the bladder specifically, the single-task segmentation network achieved better mean values than the other networks due to the fact that for the HMC dataset, which was used for training and validation, a bladder filling protocol was in place, meaning that the deformation of the bladder between different visits and planning is not large. However, this is not the case for the EMC dataset, the test set. Since the registration-based networks and joint networks were trained on small bladder deformations, they had trouble with larger deformations. The segmentation network was not affected since it does not depend on the deformation but rather on the underlying texture to segment the bladder. This issue could be relatively easily addressed by including synthetic larger deformations during training or including a few patients from the EMC dataset into the training. Nevertheless, in terms of median values, the proposed method was superior for all the organs even though we did not use domain-specific strategies similar to the ones presented in [Elmahdy et al.(2019a)Elmahdy, Jagt, Zinkstok, Qiao, Shahzad, Sokooti, Yousefi, Incrocci, Marijnen, Hoogeman, and Staring.]. Retraining or fine-tuning for this patient population and scanner type can further improve the results for the proposed methods.

A promising direction for future research is to investigate the addition of a third task to the joint networks, notably the generation of the radiotherapy treatment plan. This may allow the joint networks to generate delineations with favorable dosimetric features. Further investigations could be towards the generalization of the network across different patient populations and scanners. Finally, we hypothesize that the accuracy of the networks could be further improved by including more organs, such as the lymph nodes, as this provides extra guidance.

In conclusion, on the validation set and the independent test set, the proposed approach yielded median mean surface distances around the slice thickness. Our approach achieved 0.99 mm, 0.82 mm, 1.13 mm, and 1.47 mm on the validation set and 1.09 mm, 1.24 mm, 1.02 mm, and 2.10 mm on the test set for the prostate, bladder, seminal vesicles, and rectum, respectively. With an inference speed of less than a second, our approach is ideal for generating the daily contours in online adaptive image-guided radiotherapy, and subsequently reducing treatment-related side effects and improve quality-of-life for patients after treatment.

In this appendix we highlight the details of the network architecture as well as detailed results of the proposed method.

a.1 Base Network Architecture

a.2 Experimental Results in Terms of DSC and 95%HD