A Correlation Measure Based on Vector-Valued L_p-Norms

In this paper, we introduce a new measure of correlation for bipartite quantum states. This measure depends on a parameter α, and is defined in terms of vector-valued L_p-norms. The measure is within a constant of the exponential of α-Rényi mutual information, and reduces to the trace norm (total variation distance) for α=1. We will prove some decoupling type theorems in terms of this measure of correlation, and present some applications in privacy amplification as well as in bounding the random coding exponents. In particular, we establish a bound on the secrecy exponent of the wiretap channel (under the total variation metric) in terms of the α-Rényi mutual information according to Csiszár's proposal. 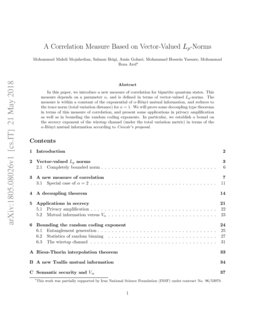 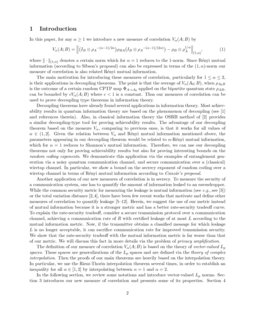 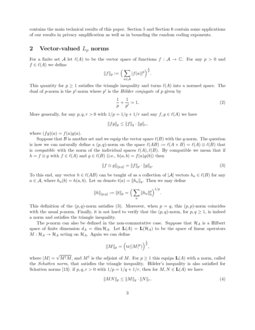 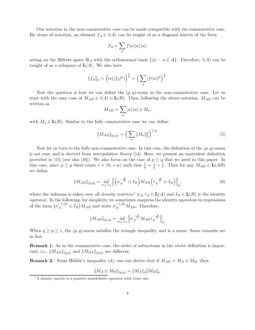 We prove a lower bound and an upper bound for the total variation distan...
Luc Devroye, et al. ∙

Three reasons are provided in favour of L^1-norm as a measure of privacy...
orzoo Rassouli, et al. ∙

We characterize the growth of the Sibson mutual information, of any orde...
Benjamin Wu, et al. ∙

A new Gini correlation between quantitative and qualitative variables

In this paper, for any α≥1 we introduce a new measure of correlation Vα(A;B) by

The main motivation for introducing these measures of correlation, particularly for 1≤α≤2, is their applications in decoupling theorems. The point is that the average of Vα(A0;B), when ρA0B is the outcome of a certain random CPTP map ΦA→A0 applied on the bipartite quantum state ρAB, can be bounded by cVα(A;B) where c<1 is a constant. Thus our measures of correlation can be used to prove decoupling type theorems in information theory.

Another application of our new measures of correlation is in secrecy. To measure the security of a communication system, one has to quantify the amount of information leaked to an eavesdropper. While the common security metric for measuring the leakage is mutual information (see e.g., see [3]) or the total variation distance [2, 4], there have been few recent works that motivate and define other measures of correlation to quantify leakage [5, 6, 7, 8, 9, 10, 11, 12]. Herein, we suggest the use of our metric instead of mutual information because it is a stronger metric and has a better rate-security tradeoff curve. To explain the rate-security tradeoff, consider a secure transmission protocol over a communication channel, achieving a communication rate of R with certified leakage of at most L

according to the mutual information metric. Now, if the transmitter obtains a classified message for which leakage

L is no longer acceptable, it can sacrifice communication rate for improved transmission security. We show that the rate-security tradeoff with the mutual information metric is far worse than that of our metric. We will discuss this fact in more details via the problem of privacy amplification.

The definition of our measure of correlation Vα(A;B) is based on the theory of vector-valued Lp spaces. These spaces are generalizations of the Lp spaces and are defined via the theory of complex interpolation

In the following section, we review some notations and introduce vector-valued Lp norms. Section 3 introduces our new measure of correlation and presents some of its properties. Section 4 contains the main technical results of this paper. Section 5 and Section 6 contain some applications of our results in privacy amplification as well as in bounding the random coding exponents.

This quantity for p≥1 satisfies the triangle inequality and turns ℓ(A) into a normed space. The dual of p-norm is the p′-norm where p′ is the Hölder conjugate of p given by

This definition of the (p,q)-norm satisfies (3). Moreover, when p=q, this (p,p)-norm coincides with the usual p-norm. Finally, it is not hard to verify that the (p,q)-norm, for p,q≥1, is indeed a norm and satisfies the triangle inequality.

The p-norm can also be defined in the non-commutative case. Suppose that HA is a Hilbert space of finite dimension dA=dimHA. Let L(A)=L(HA) to be the space of linear operators M:HA→HA acting on HA. Again we can define

Our notation in the non-commutative case can be made compatible with the commutative case. By abuse of notation, an element fA∈ℓ(A) can be taught of as a diagonal matrix of the form

acting on the Hilbert space HA with the orthonormal basis {|a⟩: a∈A}. Therefore, ℓ(A) can be taught of as a subspace of L(A). We also have

Now the question is how we can define the (p,q)-norm in the non-commutative case. Let us start with the easy case of MAB∈ℓ(A)⊗L(B). Then, following the above notation, MAB can be written as

with Ma∈L(B). Similar to the fully commutative case we can define

Now let us turn to the fully non-commutative case. In this case, the definition of the (p,q)-norm is not easy and is derived from interpolation theory [14]. Here, we present an equivalent definition provided in [15] (see also [16]). We also focus on the case of p≤q that we need in this paper. In this case, since p≤q there exists r∈(0,+∞] such that 1p=1q+1r. Then for any MAB∈L(AB) we define

When q≥p≥1, the (p,q)-norm satisfies the triangle inequality and is a norm. Some remarks are in line.

As in the commutative case, the order of subsystems in the above definition is important, i.e., ∥MAB∥(p,q) and ∥MBA∥(p,q) are different.

From Hölder’s inequality (4), one can derive that if MAB=MA⊗MB, then

When MAB∈ℓ(A)⊗L(B), the above definition of (p,q)-norm coincides with that of (5). This can be shown by trying to optimize the choices of τA,σA in (6), which can be taken to be diagonal.

We will compare our measure of correlation with Rényi mutual information which interestingly can also be written in terms of (1,p)-norms. For α≥1 the sandwiched α-Rényi relative entropy is defined by222All the logarithms in this paper are in base two.

In particular, for classical random variables

Finally the α-Rényi conditional entropy is defined by

We finish this section by stating a lemma about the monotonicity of the (1,α)-norm.

Taking infimum over σB,τB we obtain the desired result. ∎

The completely bounded norm of a super-operator Φ:L(A)→L(B) is defined by

where the supremum is taken over all auxiliary Hilbert spaces HC with arbitrary dimension dC and IC:L(C)→L(C) is the identity super-operator. In the above definition, we may replace ∞ with any 1≤t≤∞, see [14]. That is, for any t≥1 we have

We say that a super-operator between spaces with certain norms is a complete contraction if its completely bounded norm is at most 1.

First of all the swap super-operator is a complete contraction [14], i.e.,

Therefore, it suffices to show that

Equivalently we need to show that

3 A new measure of correlation

In this section, we define our measure of correlation and study some of its properties.

Let ρAB be an arbitrary bipartite density matrix. For any α≥1 we define444When α=1 we have α′=+∞.

As will be seen below, Vα(A;B) is a measure of correlation while Wα(A|B) is a related quantity that may be thought of as a conditional entropy.

In the classical case when pAB

is a joint probability distribution we have

For any ρAB the functions

are non-decreasing. In particular, for any α≥1 we have

We now prove the main property of Vα(A;B) and Wα(A|B), namely their monotonicity under local operations.

For (i) we compute

We now state the relation between Vα,Wα and Rényi information measures.

For any bipartite density matrix ρAB we have

where α′ is the Hölder conjugate of α. For Wα(A|B) we have

By the triangle inequality we have

Moreover, by Remark 2 we have

These give the first inequality. The proof of the second inequality is similar. ∎

Let ρABC be a tripartite density matrix. Then the followings hold:

Moreover, when C is classical and

Since vector valued Lp-spaces form an interpolation family [14], by the Riesz-Thorin theorem (see Appendix A) it suffices to prove this for α=1 and α=2. For α=1 by the triangle inequlality we have

where the second inequality comes from the fact that ∥\rm trA∥1→1≤1 that is easy to verify. We now prove the inequality for α=2. We compute

in the above inequality we obtain the desired result.

The next theorem gives a “weak converse” of the above inequalities.

For every tripartite density matrix ρABC and α≥1 the followings hold: