The main purpose of this paper is to present a new corrected decoupled scheme combined with a spatial finite volume method for chemotaxis models. First, we derive the scheme for a parabolic-elliptic chemotaxis model arising in embryology. We then establish the existence and uniqueness of the numerical solution, and we prove that it converges to a corresponding weak solution for the studied model. In the last section, several numerical tests are presented by applying our approach to a number of chemotaxis systems. The obtained numerical results demonstrate the efficiency of the proposed scheme and its effectiveness to capture different forms of spatial patterns. 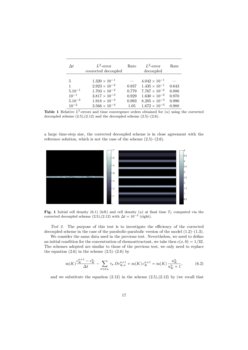 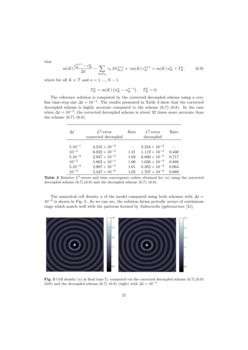 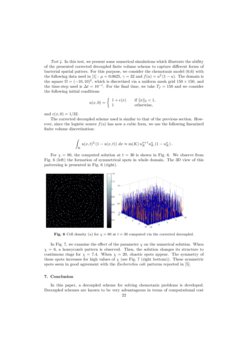 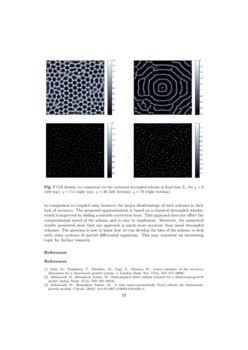 Chemotaxis refers to a phenomenon that enables cells (or organisms) to migrate in response to a chemical signal. This process has sparked the interest of many scientists since it is encountered in several medical and biological applications, such as bacteria aggregation, tumour growth, integumental patterns in animals etc.

In Oster1 , Oster and Murray discussed a cell-chemotaxis model involving motile cells that respond to a chemoattractant secreted by the cells themselves. In its dimensionless form, the model reads

where μ and a are positive constants, u is the cell density and c is the concentration of chemoattractant.

The above system is based on the Keller-Segel model Keller1 , which is the most popular model for chemotaxis. The migration of cells is assumed to be governed by Fickian diffusion and chemotaxis, and the mass of cells is conserved. The chemoattractant is assumed also to diffuse, but it increases with cell density in Michaelis-Menten way and undergoes decay through simple degradation.

In Murray1 , Murray et al. suggest that the presented cell-chemotaxis model is an appropriate mechanism for the formation of stripe patterns on the dorsal integument of embryonic and hatchling alligators (Alligator mississippiensis). These skin pigment patterns is associated with the density of melanocyte cells: Melanocytes are abundant in the regions where the black stripes appear, and are insufficient in the regions of the white stripes. The formation of these stripes is a result of a chemoattractant secretion. The system (1.1) is known to produce propagating pattern of standings peaks and troughs in cell density in the case of one-dimensional space. This patterning process was numerically and analytically investigated by Myerscough and Murray in Myerscough1 .

In this paper, we will first focus on the following parabolic-elliptic system

with the homogeneous Neumann boundary and initial conditions

where ΩT:=Ω×(0,Tf), Ω⊂R2 is an open bounded polygonal subset, Tf>0 is a fixed time and ν denotes the outward unit-normal on the boundary ∂Ω. The system (1.2) is a simpler version of the original model (1.1) in which the second equation of the system is elliptic, using the reasonable assumption that the chemoattractant diffuses much faster than cells.

In this work, we develop a decoupled finite volume scheme which can be applied to a class of chemotaxis models. For the convection-diffusion term, the approximation used is quite similar to the hybrid scheme of Spalding Spalding1 . Concerning the time discretization, which is the main aim of this paper, it is developed such that the scheme only requires to solve decoupled systems, which excludes fully implicit discretizations. We require also that the scheme converges without needing to fulfill any CFL condition, which is not the case of the fully explicit schemes. In the literature, a number of decoupled methods for the Keller-Segel model and its variants have been proposed (see, e.g., Saito2 ; Saito1 ; Strehl1 ; Andreianov1 ; Ibrahim1 ; Chamoun1 ; Akhmouch1 ; Akhmouch2 ). In all these works, the time discretization is based on the classical backward Euler scheme with an explicit approximation of some terms to avoid coupling of the system. However, it is well known that the main drawback of this strategy is its lack of accuracy. A more efficient approach will be presented in this work.

This paper provides also a convergence analysis of the proposed scheme applied to the system (1.2)–(1.3). It is proved that the convergence of the approximate solution can be obtained for any nonnegative initial cell density u0∈L2(Ω). Our proof uses some techniques from Filbet1 , where a fully implicit upwind finite volume scheme is studied for the classical Keller-Segel model.

The outline of this paper is as follows. In the next section, we present our corrected decoupled finite volume scheme to approximate the solution of (1.2)–(1.3

). In section 3, we prove the existence and uniqueness of the solution of the proposed scheme. Positivity preservation and mass conservation are also shown in this section. A priori estimates are given in Section 4. In Section 5, we use these estimates to prove that the approximate solution converges to a weak solution of the studied model. In Section 6, we present some numerical tests and compare the accuracy of our approach with that of more usual decoupled schemes. The paper ends with a conclusion.

2 Presentation of the numerical scheme

We assume that Ω⊂R2 is an open bounded polygonal subset. Following Definition 9.1 in Eymard1 , we consider an admissible finite volume mesh of Ω, denoted by T. This mesh is given by:

For all K ∈T, we denote by N(K) the set of control volumes which have a common edge with K, and by m the Lebesgue measure in R2 or R.

For all σ∈EK, we define

where d is the Euclidean distance, and we denote by τσ the transmissibility coefficient given by:

We denote by h the maximal size (diameter) of the control volumes included in T, and we define

In Section 4, the following time-step condition will be used: there exists α>0 such that

We will also need this additional constraint on the mesh: there exists ξ>0 such that

which is specially needed to apply the discrete Gagliardo-Nirenberg-Sobolev inequality (see Lemma 2.1).

We define a weak solution of the system (1.2) with boundary and initial conditions (1.3) as follows:

We denote by X(T) the set of functions from Ω to R which are constant over each control volume of the mesh. Let 1≤p<∞, if v∈X(T), the corresponding discrete Lp norm reads

We now recall the discrete Gagliardo-Nirenberg-Sobolev inequality (see chatard2 ), which will be useful to establish a priori estimates in Section 4.

Then there exists a constant C>0 only depending on p,s,r,d and Ω such that

where θ is defined by

with the compatible initial condition

and where for all σ∈EK

In the above scheme, the function S is defined by

where ε is a small constant such that ε≥0 and ε<<μ.

The terms unK and cnK denote respectively the approximations of the quantities 1\rm m(K)∫Ku(x,tn)dx and 1\rm m(K)∫Kc(x,tn)dx. As we can see, the proposed finite volume scheme is decoupled: at each time-step, we begin by solving (2.6) to compute cn+1K and then, we compute un+1K from (2.5). The discretization used for ∇⋅(u∇c) is equivalent to the second order central difference scheme when ∣∣Dcn+1K,σ∣∣≤2(μ−ε)/a and to the first order upwind scheme when Dcn+1K,σ<2(−μ+ε)/a or Dcn+1K,σ>2(μ−ε)/a. When ε=0, the scheme is identical to that of Spalding Spalding1 (see also Patankar1 ).

It is clear that we can obtain a best accuracy if we replace (2.6) by the equation

however, it will be expensive in term of computational cost to find the solution of the scheme (2.5),(2.9) since we have to solve a large nonlinear system at each time step.

The equation (2.9) can then be written as

where T∗n={K∈T∣∣ ∣∣2unKunK+1−un−1Kun−1K+1<0} for n=0,...,N−1 and T∗0=∅. We can easily verify that 0<βn≤1. We mention however that, in practice, we will take βn=1, which seems the most natural choice. Indeed, several numerical tests are performed and, as expected, the right-hand side of (2.12) is always positive for this value unless the time-step size is extremely large.

We define uδ,cδ, the finite volume approximations of u and c by:

Following Hillairet1 , we define the discrete gradient dvδ which is the approximation of ∇v by

3 Existence and uniqueness of a discrete solution

In this section, we prove existence and uniqueness of the solution of the proposed scheme. We show also that the scheme is mass conserving and positivity preserving.

, we define the vectors

To prove the desired results, we proceed by induction on n. The proof in the case of n=0 is similar to that of the inductive step. We argue now that the vectors Un and Cn are defined and nonnegative. We have

which means the matrix B is strictly diagonally dominant by rows. Moreover, since the diagonal elements of B are positive and its off-diagonal entries are nonpositive, we can conclude that B is a nonsingular M-matrix, which implies the unique solvability of (3.4) with B−1>0 . Therefore, in view of the nonnegativity of Gn (by the definition of βn (2.13)), we deduce that Cn+1≥0. Since for all σ=K|L∈EK, Dcn+1L,σ=−Dcn+1K,σ, we have for all K∈T

Then An is strictly diagonal dominant by columns. Now, since μ+aS(x)≥0 for all x∈R (by the definition (2.8)), the matrix An has nonpositive off-diagonal and positive diagonal entries, which implies that An is a nonsingular M-matrix. Consequently, the existence and uniqueness of Un+1 is proved, and since Fn≥0, it is clear that Un+1≥0.

which ends the proof.

where C is a positive constant which only depends on Ω.

Performing the following changes of variable:

and using the identity

Using the above inequality in (4.7), we obtain

Let us now multiply the above inequality by Δtlog(~un+1K), and summing over K∈T, we find that

From the expression of E1, we can see that

and since we have from a Taylor expansion of log

we deduce using the mass conservation property (3.2) that

By an integration by parts on E2, we get

Then, by a Taylor expansion of log we get

Using a summation by parts, we obtain

Next, using the identity (4.6) and the last expression of En+13, we can write

Multiplying (2.12) by ~un+1K and summing by parts we can easily see that

Finally for E4, we have