Task-oriented dialogue focuses on conversational agents that participate in user-initiated dialogues on domain-specific topics. In contrast to chatbots, which simply seek to sustain open-ended meaningful discourse, existing task-oriented agents usually explicitly model user intent and belief states. This paper examines bypassing such an explicit representation by depending on a latent neural embedding of state and learning selective attention to dialogue history together with copying to incorporate relevant prior context. We complement recent work by showing the effectiveness of simple sequence-to-sequence neural architectures with a copy mechanism. Our model outperforms more complex memory-augmented models by 7 generation and is on par with the current state-of-the-art on DSTC2. 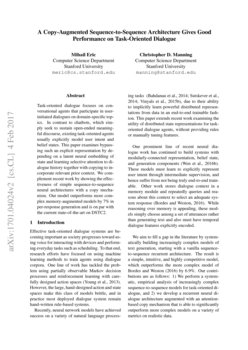 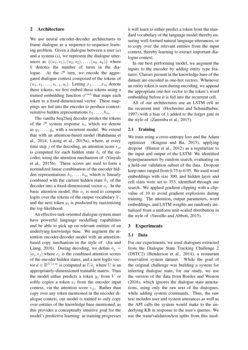 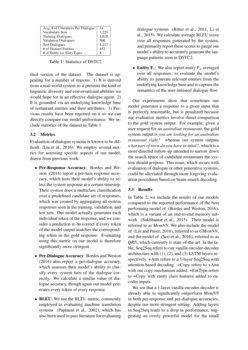 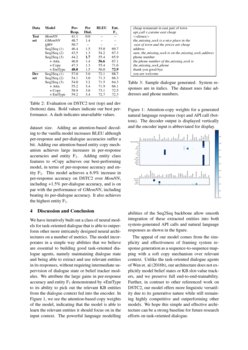 . However, the large, hand-designed action and state spaces make this class of models brittle and unscalable, and in practice most deployed dialogue systems remain hand-written, rule-based systems.

, due to their ability to implicitly learn powerful distributed representations from data in an end-to-end trainable fashion. This paper extends recent work examining the utility of distributed state representations for task-oriented dialogue agents, without providing rules or manually tuning features.

One prominent line of recent neural dialogue work has continued to build systems with modularly-connected representation, belief state, and generation components [Wen et al.2016b]. These models must learn to explicitly represent user intent through intermediate supervision, and hence suffer from not being truly end-to-end trainable. Other work stores dialogue context in a memory module and repeatedly queries and reasons about this context to select an adequate system response [Bordes and Weston2016]. While reasoning over memory is appealing, these models simply choose among a set of utterances rather than generating text and also must have temporal dialogue features explicitly encoded.

However, the present literature lacks results for now standard sequence-to-sequence architectures, and we aim to fill this gap by building increasingly complex models of text generation, starting with a vanilla sequence-to-sequence recurrent architecture. The result is a simple, intuitive, and highly competitive model, which outperforms the more complex model of Bordes:16 by 6.9%. Our contributions are as follows: 1) We perform a systematic, empirical analysis of increasingly complex sequence-to-sequence models for task-oriented dialogue, and 2) we develop a recurrent neural dialogue architecture augmented with an attention-based copy mechanism that is able to significantly outperform more complex models on a variety of metrics on realistic data.

We use neural encoder-decoder architectures to frame dialogue as a sequence-to-sequence learning problem. Given a dialogue between a user (u) and a system (s), we represent the dialogue utterances as {(u1,s1),(u2,s2),…,(uk,sk)} where k denotes the number of turns in the dialogue. At the i\scriptsize th turn of the dialogue, we encode the aggregated dialogue context composed of the tokens of (u1,s1,…,si−1,ui). Letting x1,…,xm denote these tokens, we first embed these tokens using a trained embedding function ϕemb

that maps each token to a fixed-dimensional vector. These mappings are fed into the encoder to produce context-sensitive hidden representations

The vanilla Seq2Seq decoder predicts the tokens of the i\scriptsize th system response si by first computing decoder hidden states via the recurrent unit. We denote ~h1,…,~hn as the hidden states of the decoder and y1,…,yn as the output tokens. We extend this decoder with an attention-based model [Bahdanau et al.2015, Luong et al.2015a], where, at every time step t of the decoding, an attention score ati is computed for each hidden state hi of the encoder, using the attention mechanism of  [Vinyals et al.2015]. Formally this attention can be described by the following equations:

where W1, W2, U, and v are trainable parameters of the model and ot

represents the logits over the tokens of the output vocabulary

V. During training, the next token yt is predicted so as to maximize the log-likelihood of the correct output sequence given the input sequence.

An effective task-oriented dialogue system must have powerful language modelling capabilities and be able to pick up on relevant entities of an underlying knowledge base. One source of relevant entities is that they will commonly have been mentioned in the prior discourse context. Recent literature has shown that incorporating a copying mechanism into neural architectures improves performance on various sequence-to-sequence tasks including code generation, machine translation, and text summarization

[Gu et al.2016, Ling et al.2016, Gulcehre et al.2016]. We therefore augment the attention encoder-decoder model with an attention-based copy mechanism in the style of  [Jia and Liang2016]. In this scheme, during decoding we compute our new logits vector as ot=U[~ht,~h′t,at[1:m]] where at[1:m] is the concatenated attention scores of the encoder hidden states, and we are now predicting over a vocabulary of size |V|+m. The model, thus, either predicts a token yt from V or copies a token xi from the encoder input context, via the attention score ati. Rather than copy over any token mentioned in the encoder dialogue context, our model is trained to only copy over entities of the knowledge base mentioned in the dialogue context, as this provides a conceptually intuitive goal for the model’s predictive learning: as training progresses it will learn to either predict a token from the standard vocabulary of the language model thereby ensuring well-formed natural language utterances, or to copy over the relevant entities from the input context, thereby learning to extract important dialogue context.

In our best performing model, we augment the inputs to the encoder by adding entity type features. Classes present in the knowledge base of the dataset, namely the 8 distinct entity types referred to in Table 1, are encoded as one-hot vectors. Whenever a token of a certain entity type is seen during encoding, we append the appropriate one-hot vector to the token’s word embedding before it is fed into the recurrent cell. These type features improve generalization to novel entities by allowing the model to hone in on positions with particularly relevant bits of dialogue context during its soft attention and copying. Other cited work using the DSTC2 dataset  [Bordes and Weston2016, Liu and Perez2016, Seo et al.2016] implement similar mechanisms whereby they expand the feature representations of candidate system responses based on whether there is lexical entity class matching with provided dialogue context. In these works, such features are referred to as match features.

All of our architectures use an LSTM cell as the recurrent unit  [Hochreiter and Schmidhuber1997] with a bias of 1 added to the forget gate in the style of  [Pham et al.2014].

For our experiments, we used dialogues extracted from the Dialogue State Tracking Challenge 2 (DSTC2) [Henderson et al.2014], a restaurant reservation system dataset. While the goal of the original challenge was building a system for inferring dialogue state, for our study, we use the version of the data from Bordes:16, which ignores the dialogue state annotations, using only the raw text of the dialogues. The raw text includes user and system utterances as well as the API calls the system would make to the underlying KB in response to the user’s queries. Our model then aims to predict both these system utterances and API calls, each of which is regarded as a turn of the dialogue. We use the train/validation/test splits from this modified version of the dataset. The dataset is appealing for a number of reasons: 1) It is derived from a real-world system so it presents the kind of linguistic diversity and conversational abilities we would hope for in an effective dialogue agent. 2) It is grounded via an underlying knowledge base of restaurant entities and their attributes. 3) Previous results have been reported on it so we can directly compare our model performance. We include statistics of the dataset in Table 1.

as a regularizer to the input and output of the LSTM. We identified hyperparameters by random search, evaluating on a held-out validation subset of the data. Dropout keep rates ranged from 0.75 to 0.95. We used word embeddings with size 300, and hidden layer and cell sizes were set to 353, identified through our search. We applied gradient clipping with a clip-value of 10 to avoid gradient explosions during training. The attention, output parameters, word embeddings, and LSTM weights were randomly initialized from a uniform unit-scaled distribution in the style of

Evaluation of dialogue systems is known to be difficult  [Liu et al.2016]. We employ several metrics for assessing specific aspects of our model, drawn from previous work:

Our experiments show that sometimes our model generates a response to a given input that is perfectly reasonable, but is penalized because our evaluation metrics involve direct comparison to the gold system output. For example, given a user request for an

australian restaurant, the gold system output is you are looking for an australian restaurant right? whereas our system outputs what part of town do you have in mind?, which is a more directed follow-up intended to narrow down the search space of candidate restaurants the system should propose. This issue, which recurs with evaluation of dialogue or other generative systems, could be alleviated through more forgiving evaluation procedures based on beam search decoding.

In Table 2, we present the results of our models compared to the reported performance of the best performing model of  [Bordes and Weston2016], which is a variant of an end-to-end memory network  [Sukhbaatar et al.2015]. Their model is referred to as MemNN. We also include the model of  [Liu and Perez2016], referred to as GMemNN, and the model of  [Seo et al.2016], referred to as QRN, which currently is the state-of-the-art. In the table, Seq2Seq refers to our vanilla encoder-decoder architecture with (1), (2), and (3) LSTM layers respectively. +Attn refers to a 1-layer Seq2Seq with attention-based decoding. +Copy refers to +Attn with our copy-mechanism added. +EntType refers to +Copy with entity class features added to encoder inputs.

We have iteratively built out a class of neural models for task-oriented dialogue that is able to outperform other more intricately designed neural architectures on a number of metrics. The model incorporates in a simple way abilities that we believe are essential to building good task-oriented dialogue agents, namely maintaining dialogue state and being able to extract and use relevant entities in its responses, without requiring intermediate supervision of dialogue state or belief tracker modules. Other dialogue models tested on DSTC2 that are more performant in per-response accuracy are equipped with sufficiently more complex mechanisms than our model. Taking inspiration from  [Sukhbaatar et al.2015] and  [Srivastava et al.2015], GMemNN uses an explicit memory module as well as an adaptive gating mechanism to learn to attend to relevant memories. The QRN model employs a variant of a recurrent unit that is intended to handle local and global interactions in sequential data. We contrast with these works by bootstrapping off of more empirically accepted Seq2Seq architectures through intuitive extensions, while still producing highly competitive models.

We attribute the large gains in per-response accuracy and entity F1 demonstrated by our +EntType to its ability to pick out the relevant KB entities from the dialogue context fed into the encoder. In Figure 1, we see the attention-based copy weights of the model, indicating that the model is able to learn the relevant entities it should focus on in the input context. The powerful language modelling abilities of the Seq2Seq backbone allow smooth integration of these extracted entities into both system-generated API calls and natural language responses as shown in the figure.

The appeal of our model comes from the simplicity and effectiveness of framing system response generation as a sequence-to-sequence mapping with a soft copy mechanism over relevant context. Unlike the task-oriented dialogue agents of Wen et. al Wen:16, our architecture does not explicitly model belief states or KB slot-value trackers, and we preserve full end-to-end-trainability. Further, in contrast to other referenced work on DSTC2, our model offers more linguistic versatility due to its generative nature while still remaining highly competitive and outperforming other models. Of course, this is not to deny the importance of dialogue agents which can more effectively use a knowledge base to answer user requests, and this remains a good avenue for further work. Nevertheless, we hope this simple and effective architecture can be a strong baseline for future research efforts on task-oriented dialogue.