We consider in this work a system of two stochastic differential equations named the perturbed compositional gradient flow. By introducing a separation of fast and slow scales of the two equations, we show that the limit of the slow motion is given by an averaged ordinary differential equation. We then demonstrate that the deviation of the slow motion from the averaged equation, after proper rescaling, converges to a stochastic process with Gaussian inputs. This indicates that the slow motion can be approximated in the weak sense by a standard perturbed gradient flow or the continuous-time stochastic gradient descent algorithm that solves the optimization problem for a composition of two functions. As an application, the perturbed compositional gradient flow corresponds to the diffusion limit of the Stochastic Composite Gradient Descent (SCGD) algorithm for minimizing a composition of two expected-value functions in the optimization literatures. For the strongly convex case, such an analysis implies that the SCGD algorithm has the same convergence time asymptotic as the classical stochastic gradient descent algorithm. Thus it validates the effectiveness of using the SCGD algorithm in the strongly convex case. 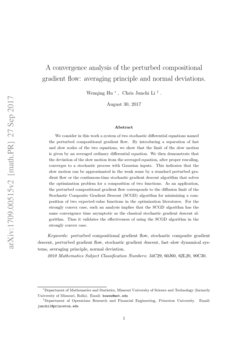 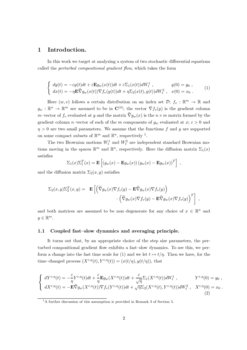 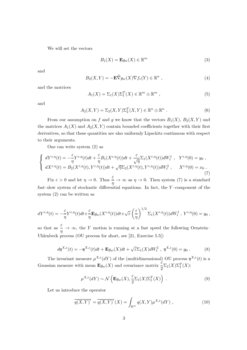 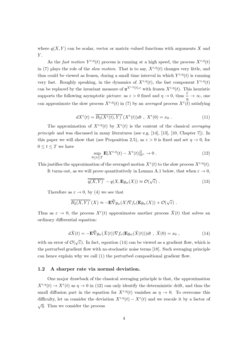 In this work we target at analyzing a system of two stochastic differential equations called the perturbed compositional gradient flow, which takes the form

Here (w,v) follows a certain distribution on an index set D; fv:Rm→R and gw:Rn→Rm are assumed to be in C(4)

∇fv(y) is the gradient column m–vector of fv evaluated at y and the matrix ˜∇gw(x) is the n×m matrix formed by the gradient column n–vector of each of the m components of gw evaluated at x; ε>0 and η>0 are two small parameters. We assume that the functions f and g are supported on some compact subsets of Rm and Rn, respectively 111A further discussion of this assumption is provided in Remark 3 of Section 5..

and the diffusion matrix Σ2(x,y) satisfies

and both matrices are assumed to be non–degenerate for any choice of x∈Rn and y∈Rm.

It turns out that, by an appropriate choice of the step size parameters, the perturbed compositional gradient flow exhibits a fast–slow dynamics. To see this, we perform a change into the fast time scale for (1) and we let t↦t/η. Then we have, for the time–changed process (Xε,η(t),Yε,η(t))=(x(t/η),y(t/η)), that

We will set the vectors

From our assumption on f and g we know that the vectors B1(X), B2(X,Y) and the matrices A1(X) and A2(X,Y) contain bounded coefficients together with their first derivatives, so that these quantities are also uniformly Lipschitz continuous with respect to their arguments.

One can write system (2) as

Fix ε>0 and let η→0. Thus εη→∞ as η→0. Then system (7) is a standard fast–slow system of stochastic differential equations. In fact, the Y–component of the system (2) can be written as

so that as εη→∞, the Y motion is running at a fast speed the following Ornstein–Uhlenbeck process (OU process for short, see [21, Exercise 5.5])

The invariant measure μX,ε(dY) of the (multidimensional) OU process yX,ε(t) is a Gaussian measure with mean Egw(X) and covariance matrix ε2Σ1(X)ΣT1(X):

Let us introduce the operator

where q(X,Y) can be scalar, vector or matrix–valued functions with arguments X and Y.

As the fast motion Yε,η(t) process is running at a high speed, the process Xε,η(t) in (7) plays the role of the slow motion. That is to say, Xε,η(t) changes very little, and thus could be viewed as frozen, during a small time interval in which Yε,η(t) is running very fast. Roughly speaking, in the dynamics of Xε,η(t), the fast component Yε,η(t) can be replaced by the invariant measure of yXε,η(t),ε with frozen Xε,η(t)

. This heuristic supports the following asymptotic picture: as

ε>0 fixed and η→0, thus εη→∞, one can approximate the slow process Xε,η(t) in (7) by an averaged process Xε(t) satisfying

This justifies the approximation of the averaged motion Xε(t) to the slow process Xε,η(t).

It turns out, as we will prove quantitatively in Lemma A.1 below, that when ε→0,

Thus as ε→0, the process Xε(t) approximates another process ¯X(t) that solves an ordinary differential equation:

1.2 A sharper rate via normal deviation.

One major drawback of the classical averaging principle is that, the approximation Xε,η(t)→Xε(t) as η→0 in (12) can only identify the deterministic drift, and thus the small diffusion part in the equation for Xε,η(t) vanishes as η→0. To overcome this difficulty, let us consider the deviation Xε,η(t)−Xε(t) and we rescale it by a factor of √η. Thus we consider the process

We will show that (see Proposition 2), as η→0, the process Zε,η(t) converges weakly to random process Zεt. The process Zεt has its deterministic drift part and is driven by two mean 0 Gaussian processes carrying explicitly calculated covariance structures. This implies that, roughly speaking, from (15) we can expand

means approximate equality of probability distributions. In fact, such approximate expansions have been introduced in the classical program under the context of stochastic climate models (see

Let us introduce the process Xε,η(t) as the following fast time-scale version of the perturbed gradient flow [13], [14]:

From the perspective of mathematical techniques, there are two classical approaches to averaging principle and normal deviations 222A much more technical and functional–analytic third method is discussed in Remark 1 of Section 5.. One is the classical Khasminskii’s averaging method [16]. This method chooses an intermediate time scale Δ→0 such that Δη→∞

. This intermediate time scale enables the analysis of averaging procedure by using a fast motion with frozen slow component. To demonstrate its effectiveness, in this work we exploit this method to do our averaging analysis. Another less intuitive method is the corrector method, which relies on the solution of an auxiliary Poisson equation. Upon obtaining appropriate a–priori estimates for this Poisson equation, one can reduce the averaging principle or normal deviations to the analysis of an Itô’s formula. Since we are working in the case when fast motion

In the field of statistical optimization, the stochastic composition optimization problem of the following form has been of tremendous interests in both theory and application:

denotes a pair of random variables.

[29] has shown that the optimization problem (20

) includes many important applications in statistical learning and finance, such as reinforcement learning, statistical estimation, dynamic programming and portfolio management.

Let us consider the following version of Stochastic Composite Gradient Descent (SCGD) algorithm in [29, Algorithm 1] whose iteration takes the form

Here (wk,vk) is taken as i.i.d. random vectors following some distribution D over the parameter space; 333Often in optimization for finite samples, the parameter space is chosen as some finite, discrete index set {1,…,N1}×{1,…,N2}, and D

fvk:Rm→R and gwk:Rn→Rm are functions indexed by the aformentioned random vectors; the vector ∇fvk(yk+1) is the gradient column m–vector of fvk evaluated at yk+1 and the matrix ˜∇gwk(xk) is the n×m matrix formed by the gradient column n–vector of each of the m components of gwk evaluated at xk. The SCGD algorithm (21) is a provably effective method that solves (20); see early optimization literatures on the convergence and rates of convergence analysis in [8, 29]. However, the convergence rate of SCGD algorithm and its variations is not known to be comparable to its SGD counterpart [29, 30]. To drill further into this algorithm we consider the coupled diffusion process (1) which is a continuum version, as both ε,η→0 and ε/η→∞, of the SCGD algorithm (21). We copy in below the perturbed compositional gradient flow (1) for convenience:

Here (w,v) is taken to be distributed as D, and fv:Rm→R and gw:Rn→Rm are assumed to be in C(4). Without loss of generality, when considering an optimization problem (20), we can assume that the functions f and g are supported on some compact subsets of Rm and Rn, respectively444See Remark 3 of Section 5.. Also for convenience, let us further assume that the w and v in the (w,v)-pair drawn from D are independent. We do not believe this assumption is necessary, see discussions in [29, 30]; however it does simplify our analysis since (W1t,W2t) in the perturbed compositional gradient flow (22) can be chosen as an independent pair of Brownian motions which in turn simplifies the proof.

for a connection to averaging principle for constant stepsize algorithms. However, these mathematical theories focus on the long-time asymptotic analysis instead of convergence rates, which is vital in many recent applications. The current work serves as an attempt on convergence rates using one algorithmic example (SCGD) and can be viewed as a further contribution along this line of research thread.

Organization. The paper is organized as follows. In Section 2 we will show the averaging principle that justifies the convergence of Xε,η(t) to Xε(t) as η→0. In Section 3 we will consider the rescaled deviation Zε,ηt=(Xε,η(t)−Xε(t))/√η and we show that as η→0 it converges weakly to the process Zεt. This justifies (16). In Section 4 we show the approximation (19) and we justify the effectiveness of using SCGD in the strongly convex case. In Section 5 we discuss further problems, remarks and generalizations.

Notational Conventions. For an n–vector v=(v1,...,vn) we define the norm

If q is a vector or a matrix, then |q|norm denotes either |q|Rn when q is an n–vector, or ∥q∥Rn⊗Rn if q is an n×n matrix. The standard inner product in Rn is denoted as ⟨∙,∙⟩Rn.

The spaces C(i)(D), i=0,1,... (and C(D)=C(0)(D)) are the spaces of i–times continuously differentiable functions on a domain D (D can be the whole space). For a function f∈C(i)(D) we define ∥f∥i to be the C(i)(D) norm of f on D. In case we need to highlight the target space, we also use C(i)(D;M) that refers to functions in the space C(i)(D) that are mapped into M. If f∈Lip(D) is Lipschitz continuous on D, then [f]Lip is the Lipschitz seminorm [f]Lip=supx,y∈D|f(x)−f(y)|norm|x−y|norm. In the case of vector or matrix valued functions, the Lipschitz norm is then defined to be the largest Lipschitz norm for its corresponding component functions.

Throughout the paper, capital X(t),Y(t),¯X(t), etc., are quantities for the time rescaled process (2), and small x(t),y(t),¯x(t), etc., are quantities for the original process (1). The constant C denotes a positive constant that varies from line to line. Sometimes, to emphasize the dependence of this constant on other parameters, C=C(∙) may also be used. For notational convenience, we use simultaneously, e.g., X(t) or Xt to denote a stochastic process.

Our first Lemma is about L2–boundedness of the system (Xε,ηt,Yε,ηt) in (7).

We can write the solution Yε,ηt in (7) in mild form as

The next Lemma summarizes basic facts about the process yX,ε defined in (8).

where the constant C>0 may depend on ε, but is independent of X.

Moreover, for some constant C>0 we have

in which the constant C may depend on ε but is independent of X.

Thus we have the explicit representation

is the identity matrix in

Rm. Then we have the exponential mixing estimate, that for δ>0 we have

Now we will derive the averaging principle following the classical method in [16]. Let T>0. Let us consider a partition of the time interval [0,T] into intervals of the same length Δ>0. Let us introduce the auxiliary processes ˆYε,ηt, ˆXε.ηt by means of the relations