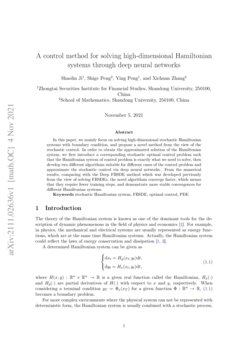 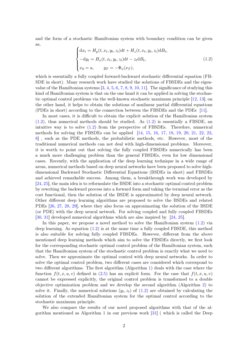 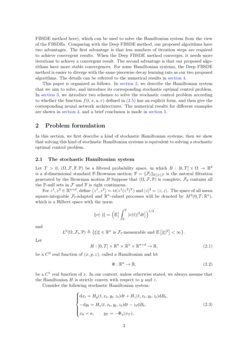 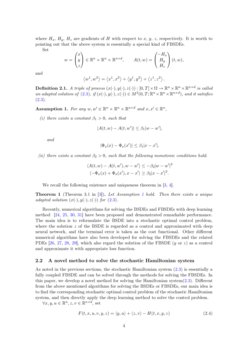 Environmental management should be based on a long-run sustainable viewp...
Hidekazu Yoshioka, et al. ∙

Nonlinear input design as optimal control of a Hamiltonian system

The theory of the Hamiltonian system is known as one of the dominant tools for the description of dynamic phenomenons in the field of physics and economics [1]. For example, in physics, the mechanical and electrical systems are usually represented as energy functions, which are at the same time Hamiltonian systems. Actually, the Hamiltonian system could reflect the laws of energy conservation and dissipation [1, 2].

A determined Hamiltonian system can be given as

where H(x,y):Rn×Rn→R is a given real function called the Hamiltonian, Hx(⋅) and Hy(⋅) are partial derivatives of H(⋅) with respect to x and y, respectively. When considering a terminal condition yT=Φx(xT) for a given function Φ:Rn→R, (1.1) becomes a boundary problem.

which is essentially a fully coupled forward-backward stochastic differential equation (FBSDE in short). Many research work have studied the solutions of FBSDEs and the eigenvalue of the Hamiltonian systems

[3, 4, 5, 6, 7, 8, 9, 10, 11]. The significance of studying this kind of Hamiltonian system is that on the one hand it can be applied in solving the stochastic optimal control problems via the well-known stochastic maximum principle [12, 13]

; on the other hand, it helps to obtain the solutions of nonlinear partial differential equations (PDEs in short) according to the connection between the FBSDEs and the PDEs

, such as the PDE methods, the probabilistic methods, etc. However, most of the traditional numerical methods can not deal with high-dimensional problems. Moreover, it is worth to point out that solving the fully coupled FBSDEs numerically has been a much more challenging problem than the general FBSDEs, even for low dimensional cases. Recently, with the application of the deep learning technique in a wide range of areas, numerical methods based on deep neural networks have been proposed to solve high-dimensional Backward Stochastic Differential Equations (BSDEs in short) and FBSDEs and achieved remarkable success. Among them, a breakthrough work was developed by

[24, 25], the main idea is to reformulate the BSDE into a stochastic optimal control problem by rewriting the backward process into a forward form and taking the terminal error as the cost functional, then the solution of the BSDE is approximated by deep neural network. Other different deep learning algorithms are proposed to solve the BSDEs and related PDEs [26, 27, 28, 29], where they also focus on approximating the solution of the BSDE (or PDE) with the deep neural network. For solving coupled and fully coupled FBSDEs [30, 31] developed numerical algorithms which are also inspired by  [24, 25].

In this paper, we propose a novel method to solve the Hamiltonian system (1.2) via deep learning. As equation (1.2) is at the same time a fully coupled FBSDE, this method is also suitable for solving fully coupled FBSDEs. However, different from the above mentioned deep learning methods which aim to solve the FBSDEs directly, we first look for the corresponding stochastic optimal control problem of the Hamiltonian system, such that the Hamiltonian system of the stochastic control problem is exactly what we need to solve. Then we approximate the optimal control with deep neural networks. In order to solve the optimal control problem, two different cases are considered which correspond to two different algorithms. The first algorithm (Algorithm 1) deals with the case where the function f(t,x,u,v) defined in (2.5) has an explicit form. For the case that f(t,x,u,v) cannot be expressed explicitly, the original control problem is transformed to a double objective optimization problem and we develop the second algorithm (Algorithm 2) to solve it. Finally, the numerical solutions (yt,zt) of (1.2) are obtained by calculating the solution of the extended Hamiltonian system for the optimal control according to the stochastic maximum principle.

This paper is organized as follows. In section 2, we describe the Hamiltonian system that we aim to solve, and introduce its corresponding stochastic optimal control problem. In section 3, we introduce two schemes to solve the stochastic control problem according to whether the function f(t,x,u,v) defined in (2.5) has an explicit form, and then give the corresponding neural network architectures. The numerical results for different examples are shown in section 4, and a brief conclusion is made in section 5.

be a filtered probability space, in which

B:[0,T]×Ω→Rd is a d-dimensional standard F-Brownian motion; F={Ft}0≤t≤T is the natural filtration generated by the Brownian motion B Suppose that (Ω,F,P) is complete, F0 contains all the P-null sets in F and F is right continuous.

be a C2 real function of (x,y,z), called a Hamiltonian and let

be a C1 real function of x. In our context, unless otherwise stated, we always assume that the Hamiltonian H is strictly convex with respect to y and z.

where Hx, Hy, Hz are gradients of H with respect to x, y, z, respectively. It is worth to pointing out that the above system is essentially a special kind of FBSDEs.

We recall the following existence and uniqueness theorem in [3, 4].

Recently, numerical algorithms for solving the BSDEs and FBSDEs with deep learning method  [24, 25, 30, 31] have been proposed and demonstrated remarkable performance. The main idea is to reformulate the BSDE into a stochastic optimal control problem, where the solution z of the BSDE is regarded as a control and approximated with deep neural network, and the terminal error is taken as the cost functional. Other different numerical algorithms have also been developed for solving the FBSDEs and the related PDEs [26, 27, 28, 29], which also regard the solution of the FBSDE (y or z

) as a control and approximate it with appropriate loss function.

2.2 A novel method to solve the stochastic Hamiltonian system

and the cost functional is given as

We need the following assumption.

f(t,x,u,v) is continuously differentiable with respect to x, u, v, and

Under our assumptions, for any optimal triple (x∗(⋅),u∗(⋅),v∗(⋅)) of the optimal control problem (2.6)-(2.7), we have the following extended stochastic Hamiltonian system through the well-known stochastic maximum principle (SMP in short) ( e.g. Theorem 4.1 in [12]),

Because h(t,x,u,v,y,z) is strictly concave in u,v, it yields that the maximum point (u∗t,v∗t) of (2.13) is uniquely determined by (x∗t,y∗t,z∗t) due to the implicit function existence theorem:

Thus, the derivatives of f(t,x,u,v) with respect to u,v are

It can be verified that

The following proposition can help us to construct our algorithms in the next section.

Under the same assumptions as in Theorem 2, we have

Then y∗(⋅) can be expressed as

By the definition of H and the SMP,

The definition of f(t,x,u,v) shows that

Because the strict concavity of F(t,x,u,v,y,z) with respect to y,z, we have

Similar to the proof of Theorem 2, according to the implicit function existence theorem, we can easily check that

In Theorem 2 and Proposition 3, we choose the stochastic optimal control problem (2.6)-(2.7), whose diffusion term b and drift term σ of the state equation are simple u and v. In fact, to simplify the linear terms of y and z in the Hamiltonian H, we can also choose other forms of b and σ, such as α1(x)+α2(x)u and β1(x)+β2(x)v, which are linear with respect to u and v. In this cases, the transformations (2.5) and (2.14) also hold. We show an example in the numerical result, in subsection 4.2.

Besides, we can still solve the Hamiltonian system (2.3) even if the coefficients Hx,Hy,Hz do not satisfy the monotonic conditions (Assumption 1 (ii)) in Theorem 2 and Proposition 3. For example, the articles [8, 9] studied the solvability of FBSDEs under relatively loose conditions. In this situation, as long as the optimal controls reach the optimal values, the Hamiltonian system (2.3) can be solved, however the solution is not necessarily unique.

In Section 2, we present the idea of the stochastic optimal control method to solve the Hamiltonian system (2.3). According to Theorem 2, we only need to find the optimal control triple (x∗(⋅),u∗(⋅),v∗(⋅)) of the stochastic control problem (2.6) and (2.7), then the solution (y∗(⋅),z∗(⋅)) can be obtained by taking the conditional expectation on the backward SDE of (2.10). Therefore, effective approximation method should be used to obtain the optimal triple of (2.6)-(2.7), especially for high dimensional cases.

Deep neural networks are usually used to approximate functions defined on finite-dimensional space, and the approximation relies on the composition of layers with simple functions. On the basis of the universal approximation theorem [33, 34], the neural networks have shown to be an effective tool and gained great successes in numerous practical applications. In this paper, inspired by [35], we simulate the stochastic optimal control problem (2.6)-(2.7) from a direct way with the deep neural network and develop two different numerical algorithms suitable for different cases.

which is small enough. Then the Euler-Maruyama scheme of the state equation (2.6) can be written as

and the corresponding cost functional is given as

where M represents the number of Monte Carlo samples.

We introduce a feedforward neural network φθ:[0,T]×Rn→Rn of the form

We approximate the controls u,v with two different neural networks, which can be represented with (3.3) and denoted as φθuu and φθvv, respectively:

When the function f(t,x,u,v) defined as (2.5) has an explicit form, then the discrete cost functional (3.2) can be approximated directly with

To minimize the loss function (3.5

) and learn the optimal parameters, some basic optimization algorithms, such as stochastic gradient descent (SGD), AdaGrad, RMSProp, and Adam which are already implemented in TensorFlow can be used. In this paper, the Adam method

Once we obtain the approximations of the optimal controls u∗ and v∗, we can calculate the numerical solution y∗t by taking the conditional expectation on the Backward SDE of (2.10), which can be approximated with Monte Carlo simulation:

The pseudo-code is shown in Algorithm 1.