In this paper, we proposed a construction of a UD k-ary T-user coding scheme for MAAC. We first give a construction of k-ary T^f+g-user UD code from a k-ary T^f-user UD code and a k^±-ary T^g-user difference set with its two component sets D^+ and D^- a priori. Based on the k^±-ary T^g-user difference set constructed from a (2k-1)-ary UD code, we recursively construct a UD k-ary T-user codes with code length of 2^m from initial multi-user codes of k-ary, 2(k-1)+1-ary, ..., (2^m(k-1)+1)-ary. Introducing multi-user codes with higer-ary makes the total rate of generated code A higher than that of conventional code. 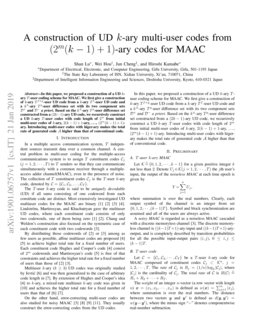 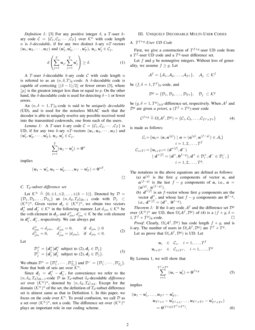 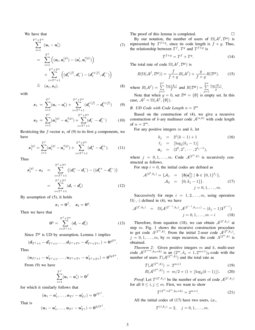 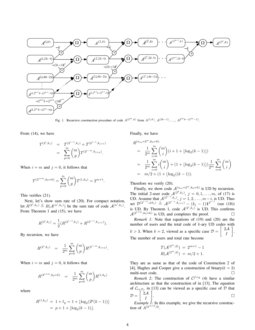 A construction of maximally recoverable codes

We give a framework for generalizing LDPC code constructions that use Tr...
Diane Donovan, et al. ∙

Bayesian calibration of a numerical code for prediction

In a multiple access communication system, T independent sources transmit data over a common channel. A central problem in multi-user coding for the multiple-access communications system is to assign T constituent codes Cj (j=1,2,⋯,T) to T senders so that they can communicate simultaneously with a common receiver through a multiple-access adder channel(MAAC), even in the presence of noise. The collection of T constituent codes Cj is the T-user k-ary code, denoted by C={C1,C2,…,CT}.

The T-user k-ary code is said to be uniquely decodable (UD) if all sums consisting of one codeword from each constitute code are distinct. Most extensively investigated UD multiuser codes for the MAAC are binary [1] [2] [3] [4]. Lindström, Martirosyan, and Khachatryan gave the multiuser UD codes, where each constituent code consists of only two codewords, one of them being zero [1] [2]. Chang and Weldon’s construction also focused on the symmetric case of each constituent code with two codewords [3].

Multiuser k-ary (k≥3) UD codes was originally studied by Jevtić [6] and was then generalized to the case of arbitrary code length in [7]. By extension of Hughes and Cooper’s idea [4] to k-ary, a mixed-rate multiuser k-ary code was given in [10] and achieves the higher total rate for a fixed number of users than that of [6] [7].

In this paper, we proposed a construction of a UD k-ary T-user coding scheme for MAAC. We first give a construction of k-ary Tf+g-user UD code from a k-ary Tf-user UD code and a k±-ary Tg-user difference set with its two component sets D+ and D− a priori. Based on the k±-ary Tg-user difference set constructed from a (2k−1)-ary UD code, we recursively construct a UD k-ary T-user codes with code length of 2m from initial multi-user codes of k-ary, 2(k−1)+1-ary, …, (2m(k−1)+1)-ary. Introducing multi-user codes with higer-ary makes the total rate of generated code A higher than that of conventional code.

at each time epoch is given by

where summation is over the real numbers. Clearly, each output symbol of the channel is an integer from set {0,1,2,⋯,(k−1)T}. Symbol and block synchronization are assumed and all of the users are always active.

-ary-output, and is completely described by transition probabilities for all the possible input-output pairs

The weight of an integer n

-vector (a row vector with length

n) x=(x1,x2,⋯,xn) is defined as w(x)=∑nj=1|xj|, where summation is over the real numbers. The distance between two vectors y and y′ is defined as d(y,y′)=w(y−y′), where the minus sign “−” denotes componentwise real-number subtraction.

An (n,δ=1,T)k-code is said to be uniquely decodable (UD), and is used for the noiseless MAAC such that the decoder is able to uniquely resolve any possible received word into the transmitted codewords, one from each of the users.

Let f and g be nonnegtive integers. Without loss of generality, we assume f≥g. Let

be (g,δ=1,Tg)±k-difference set, respectively. When Af and Dg are given a priori, a (Tf+Tg)-user code

is made as follows:

The notations in the above equations are defined as follows:

Let us prove that Ω(Af,Dg) is UD. Let

By Lemma 1, we will show that

Restricting the f-vector \boldmaths1 of (9) to its first g components, we have

By assumption of (5), it holds

Then we have that

Since Dg is UD by assumption, Lemma 1 implies

for which it similarly follows that

The proof of this lemma is completed. □

By our notation, the number of users of Ω(Af,Dg) is represented by Tf+g, since its code length is f+g. Thus, the relationship between Tf, Tg and Tf+g is

The total rate of code Ω(Af,Dg) is

For any positive integers m and k, let

For step i=0, the initial codes are defined as

All the initial codes of (III-B) have two users, i.e.,

By recursion, we have

They are as same as that of the code of Construction 2 of [4], Hughes and Cooper give a construction of binary(k=2) multi-user code. □

In this example, we give the recursive construction of A(2m=2,3).

Similarly, we have the 5-ary code

and the 9-ary code

At step j=2, we obtain the code