The Douglas Rachford algorithm is an algorithm that converges to a minimizer of a sum of two convex functions. The algorithm consists in fixed point iterations involving computations of the proximity operators of the two functions separately. The paper investigates a stochastic version of the algorithm where both functions are random and the step size is constant. We establish that the iterates of the algorithm stay close to the set of solution with high probability when the step size is small enough. Application to structured regularization is considered. 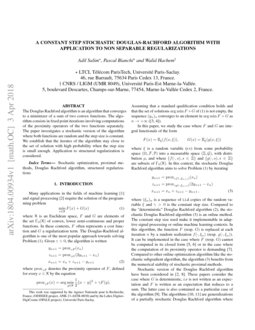 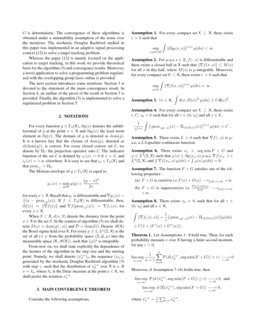 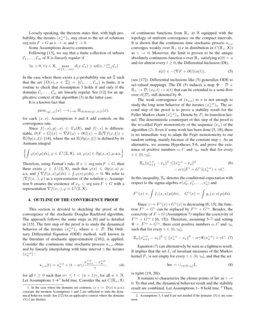 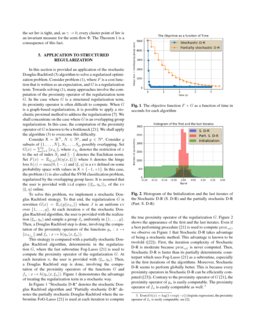 We prove that with high probability, a uniform sample of n points in a c...
Jean Cardinal, et al. ∙

In this paper, we revisit the convergence of the Heavy-ball method, and ...
Tao Sun, et al. ∙

This manuscript shows that AdaBoost and its immediate variants can produ...
Matus Telgarsky, et al. ∙

Many applications in the fields of machine learning

where X is an Euclidean space, F and G are elements of the set Γ0(X) of convex, lower semi-continuous and proper functions. In these contexts, F often represents a cost function and G a regularization term. The Douglas-Rachford algorithm is one of the most popular approach towards solving Problem (1). Given γ>0, the algorithm is written

where proxγF denotes the proximity operator of F, defined for every x∈X by the equation

Assuming that a standard qualification condition holds and that the set of solutions argminF+G of (1) is not empty, the sequence (yn)n converges to an element in argminF+G as n→+∞ ([3, 4]).

In this paper, we study the case where F and G are integral functionals of the form

is a random variable (r.v) from some probability space

(Ω,F,P) into a measurable space (Ξ,G), with distribution μ, and where {f(⋅,s),s∈Ξ} and {g(⋅,s),s∈Ξ} are subsets of Γ0(X). In this context, the stochastic Douglas Rachford algorithm aims to solve Problem (1) by iterating

where (ξn)n is a sequence of i.i.d copies of the random variable ξ and γ>0 is the constant step size. Compared to the "deterministic" Douglas Rachford algorithm (1), the stochastic Douglas Rachford algorithm (1) is an online method. The constant step size used make it implementable in adaptive signal processing or online machine learning contexts. In this algorithm, the function F (resp. G) is replaced at each iteration n by a random realization f(⋅,ξn) (resp. g(⋅,ξn)). It can be implemented in the case where F (resp. G) cannot be computed in its closed form [5, 6] or in the case where the computation of its proximity operator is demanding [7]. Compared to other online optimization algorithm like the stochastic subgradient algorithm, the algorithm (1) benefits from the numerical stability of stochastic proximal methods.

Stochastic version of the Douglas Rachford algorithm have been considered in [2, 8]. These papers consider the case where G is deterministic, i.e is not written as an expectation and F is written as an expectation that reduces to a sum. The latter case is also contained as a particular case of the algorithm [9]. The algorithms [10, 11] are generalizations of a partially stochastic Douglas Rachford algorithm where G is deterministic. The convergence of these algorithms is obtained under a summability assumption of the noise over the iterations. The stochastic Douglas Rachford studied in this paper was implemented in an adaptive signal processing context [12] to solve a target tracking problem.

Whereas the paper [12] is mainly focused on the application to target tracking, in this work we provide theoretical basis for the algorithm (1) and convergence results. Moreover, a novel application to solve a programming problem regularized with the overlapping group lasso online is provided.

The next section introduces some notations. Section 3 is devoted to the statement of the main convergence result. In Section 4, an outline of the proof of the result in Section 3 is provided. Finally, the algorithm (1) is implemented to solve a regularized problem in Section 5.

For every function g∈Γ0(X), ∂g(x) denotes the subdifferential of g at the point x∈X and ∂g0(x) the least norm element in ∂g(x). The domain of g is denoted as dom(g). It is a known fact that the closure of dom(g), denoted as cl(dom(g)), is convex. For every closed convex set C, we denote by ΠC the projection operator onto C. The indicator function of the set C is defined by ιC(x)=0 if x∈C, and ιC(x)=+∞ elsewhere. It is easy to see that ιC∈Γ0(X) and that proxιC=ΠC.

The Moreau envelope of g∈Γ0(X) is equal to

From now on, we shall state explicitly the dependence of the iterates of the algorithm in the step size and the starting point. Namely, we shall denote (xγ,νn)n the sequence (xn)n generated by the stochastic Douglas Rachford algorithm (1) with step γ, such that the distribution of xγ,ν0 over X is ν. If ν=δa, where δa is the Dirac measure at the point a∈X, we shall prefer the notation xγ,an.

For every compact set K⊂X, there exists ε>0 such that

For μ-a.e s∈Ξ, f(⋅,s) is differentiable and there exists a closed ball in X such that ∥∇f(x,s)∥≤M(s) for all x in this ball, where M(s) is μ-integrable. Moreover, for every compact set K⊂X, there exists ε>0 such that

The function F+G satisfies one of the following properties:

Let Assumptions 1– 8 hold true. Then, for each probability measure ν over X

having a finite second moment, for any

Moreover, if Assumption 7–2 holds true, then

Loosely speaking, the theorem states that, with high probability, the iterates (xγ,νn)n stay close to the set of solutions argminF+G as n→∞ and γ→0.

Following [13], we say that a finite collection of subsets C1,\mathellipsis,Cm of X is linearly regular if

In the case where there exists a μ-probability one set ~Ξ such that the set {D(s),s∈~Ξ}={C1,\mathellipsis,Cm} is finite, it is routine to check that Assumption 3 holds if and only if the domains C1,\mathellipsis,Cm are linearly regular. See [12] for an applicative context of the algorithm (1) in the latter case.

It is a known fact that

for each (x,s). Assumptions 4 and 8 add controls on the convergence rate.

4 Outline of the convergence proof

This section is devoted to sketching the proof of the convergence of the stochastic Douglas Rachford algorithm. The approach follows the same steps as [6] and is detailed in [15]. The first step of the proof is to study the dynamical behavior of the iterates (xγ,an)n where a∈D

for all t≥0 such that nγ≤t<(n+1)γ, for all n∈N. Let Assumptions 1–4 111In the case where the domains are common, i.e s↦D(s) is μ-a.s constant, the moment Assumptions 1 and 2 are sufficient to state the dynamical behavior result. See [12] for an applicative context where the domains D(s) are distinct. hold true. Consider the set C(R+,X) of continuous functions from R+ to X equipped with the topology of uniform convergence on the compact intervals. It is shown that the continuous time stochastic process xγ,a converges weakly over R+ (i.e in distribution in C(R+,X)) as γ→0. Moreover, the limit is proven to be the unique absolutely continuous function x over R+ satisfying x(0)=a and for almost every t≥0, the Differential Inclusion (DI),

The weak convergence of (xγ,a) to x is not enough to study the long term behavior of the iterates (xγ,an)n

. The second step of the proof is to prove a stability result for the Feller Markov chain

(xγ,an)n. Denote by Pγ its transition kernel. The deterministic counterpart of this step of the proof is the so-called Fejér monotonicity of the sequence (xn) of the algorithm (1). Even if some work has been done [5, 18], there is no immediate way to adapt the Fejér monotonicity to our random setting, mainly because of the constant step γ. As an alternative, we assume Hypotheses 5-6, and prove the existence of positive numbers α,C and γ0, such that for every γ∈(0,γ0],

In this inequality, En denotes the conditional expectation with respect to the sigma-algebra σ(xγ0,xγ1,\mathellipsis,xγn) and

Equation (7) can alternatively be seen as a tightness result. It implies that the set Iγ of invariant measures of the Markov kernel Pγ is not empty for every γ∈(0,γ0], and that the set

It remains to characterize the cluster points of Inv as γ→0. To that end, the dynamical behavior result and the stability result are combined. Let Assumptions 1– 8 hold true. 222Assumptions 3, 4 and 8 are not needed if the domains D(s) are common. Then, the set Inv is tight, and, as γ→0, every cluster point of Inv is an invariant measure for the semi-flow Φ. The Theorem 1 is a consequence of this fact.

Consider X=RN, N∈N⋆, and g∈N⋆. Consider g subsets of {1,\mathellipsis,N}, S1,\mathellipsis,Sg, possibly overlapping. Set G(x)=∑gj=1∥xSj∥, where xSj denotes the restriction of x to the set of index Sj and ∥⋅∥ denotes the Euclidean norm. Set F(x)=E(ξ,η)(h(η⟨x,ξ⟩)) where h denotes the hinge loss h(z)=max(0,1−z) and (ξ,η) is a r.v defined on some probability space with values in X×{−1,+1}. In this case, the problem (1) is also called the SVM classification problem, regularized by the overlapping group lasso. It is assumed that the user is provided with i.i.d copies ((ξn,ηn))n of the r.v (ξ,η) online.

(logistic regression), the proximity operator of