A conjecture on permutation trinomials over finite fields of characteristic two

In this paper, by analyzing the quadratic factors of an 11-th degree polynomial over the finite field , a conjecture on permutation trinomials over [x] proposed very recently by Deng and Zheng is settled, where n=2m and m is a positive integer with (m,5)=1. 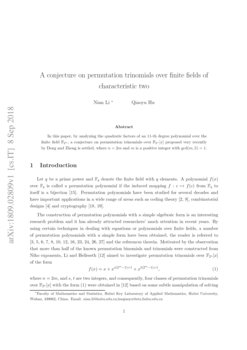 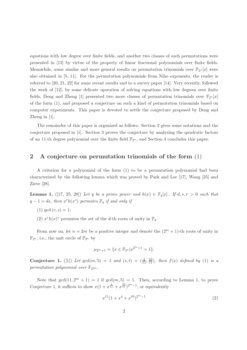 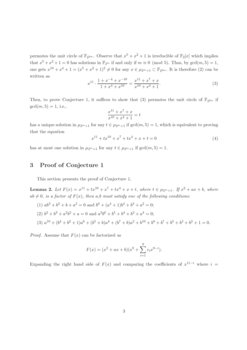 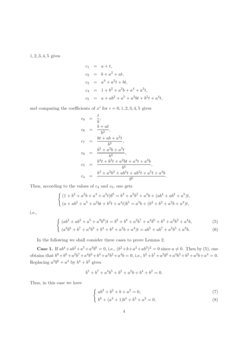 Let q be a prime power and Fq denote the finite field with q elements. A polynomial f(x) over Fq is called a permutation polynomial if the induced mapping f:c↦f(c) from Fq to itself is a bijection [15]. Permutation polynomials have been studied for several decades and have important applications in a wide range of areas such as coding theory [2, 9], combinatorial designs [4] and cryptography [18, 19].

The construction of permutation polynomials with a simple algebraic form is an interesting research problem and it has already attracted researchers’ much attention in recent years. By using certain techniques in dealing with equations or polynomials over finite fields, a number of permutation polynomials with a simple form have been obtained, the reader is referred to [3, 5, 6, 7, 8, 10, 12, 16, 23, 24, 26, 27] and the references therein. Motivated by the observation that more than half of the known permutation binomials and trinomials were constructed from Niho exponents, Li and Helleseth [12] aimed to investigate permutation trinomials over F2n[x] of the form

The remainder of this paper is organized as follows. Section 2 gives some notations and the conjecture proposed in [1]. Section 3 proves the conjecture by analyzing the quadratic factors of an 11-th degree polynomial over the finite field F2n, and Section 4 concludes this paper.

2 A conjecture on permutation trinomials of the form (1)

A criterion for a polynomial of the form (1) to be a permutation polynomial had been characterized by the following lemma which was proved by Park and Lee [17], Wang [25] and Zieve [28].

has a unique solution in μ2m+1 for any t∈μ2m+1 if gcd(m,5)=1, which is equivalent to proving that the equation

This section presents the proof of Conjecture 1.

Assume that F(x) can be factorized as

Expanding the right hand side of F(x) and comparing the coefficients of x11−i where i=1,2,3,4,5 gives

Then, according to the values of c4 and c5, one gets

In the following we shall consider three cases to prove Lemma 2.

Thus, in this case we have

by a detailed calculation. This completes the proof. ∎

i.e., a2mb=a. This implies that if x2+ax+b=0 is a factor of F(x) satisfying x2+ax+b=0 has two solutions in μ2m+1, then it must have a2mb=a. Actually this fact has been found in [22] and the number of solutions x in μ2m+1 to x2+ax+b=0 has also been characterized there. We provide the proof of the relation a2mb=a here to make the paper self-contained.

Due to this fact, we further consider the conditions in Lemma 2.

According to Lemma 2, we can discuss the three cases in Lemma 2 as follows:

To this end, define

The polynomial G(x,y) can be factorized over F25m[x,y] as follows:

According to Lemma 4, it suffices to show that

then θ∈F22m, which leads to

In this paper, by analyzing the possible quadratic factors of an 11-th degree polynomial over the finite field F2n, a conjecture on permutation trinomials over F2n[x] proposed by Deng and Zheng in [1] was settled.