A Compressive Sensing Based Approach to Sparse Wideband Array Design

Sparse wideband sensor array design for sensor location optimisation is highly nonlinear and it is traditionally solved by genetic algorithms, simulated annealing or other similar optimization methods. However, this is an extremely time-consuming process and more efficient solutions are needed. In this work, this problem is studied from the viewpoint of compressive sensing and a formulation based on a modified l_1 norm is derived. As there are multiple coefficients associated with each sensor, the key is to make sure that these coefficients are simultaneously minimized in order to discard the corresponding sensor locations. Design examples are provided to verify the effectiveness of the proposed methods. 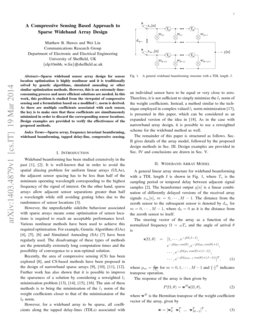 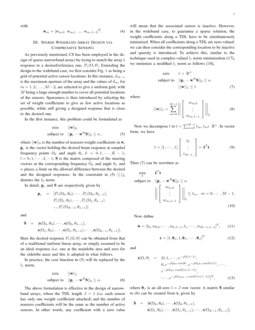 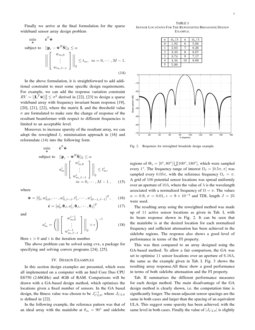 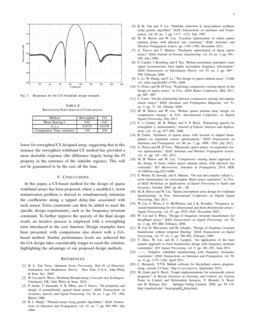 Wideband beamforming has been studied extensively in the past [1, 2]. It is well-known that in order to avoid the spatial aliasing problem for uniform linear arrays (ULAs), the adjacent sensor spacing has to be less than half of the minimum operating wavelength corresponding to the highest frequency of the signal of interest. On the other hand, sparse arrays allow adjacent sensor separations greater than half a wavelength while still avoiding grating lobes due to the randomness of sensor locations [3].

However, the unpredictable sidelobe behaviour associated with sparse arrays means some optimisation of sensor locations is required to reach an acceptable performance level. Various nonlinear methods have been used to achieve this required optimisation. For example, Genetic Algorithms (GAs) [4, 5, 6] and Simulated Annealing (SA) [7] have been regularly used. The disadvantage of these types of methods are the potentially extremely long computation times and the possibility of convergence to a non-optimal solution.

Recently, the area of compressive sensing (CS) has been explored [8], and CS-based methods have been proposed in the design of narrowband sparse arrays [9, 10, 11, 12]. Further work has also shown that it is possible to improve the sparseness of a solution by considering a reweighted l1 minimisation problem [13, 14, 15, 16]. The aim of these methods is to bring the minimisation of the l1 norm of the weight coefficients closer to that of the minimisataion of the l0 norm.

However, for a wideband array to be sparse, all coefficients along the tapped delay-lines (TDLs) associated with an individual sensor have to be equal or very close to zero. Therefore, it is not sufficient to simply minimize the l1 norm of the weight coefficients. Instead, a method similar to the technique employed in complex-valued l1 norm minimization [17], is presented in this paper, which can be considered as an expanded version of the idea in [18]. As in the case with narrowband array design, it is possible to use a reweighted scheme for the wideband method as well.

The remainder of this paper is structured as follows. Sec. II gives details of the array model, followed by the proposed design methods in Sec. III. Design examples are provided in Sec. IV and conclusions are drawn in Sec. V.

A general linear array structure for wideband beamforming with a TDL length J is shown in Fig. 1, where Ts is the sampling period or temporal delay between adjacent signal samples [2]. The beamformer output y[n] is a linear combination of differently delayed versions of the received array signals xm[n], m=0,⋯,M−1. The distance from the zeroth sensor to the subsequent sensor is denoted by dm for m=0,⋯,M−1, where d0=0 as it is the distance from the zeroth sensor to itself.

Ω=ωTs and the angle of arrival θ is

The response of the array is then given by

where wH is the Hermitian transpose of the weight coefficient vector of the array, given by

As previously mentioned, CS has been employed in the design of sparse narrowband arrays by trying to match the array’s response to a desired/reference one, Pr(Ω,θ). Extending the design to the wideband case, we first consider Fig. 1 as being a grid of potential active sensor locations. In this instance, dM−1 is the maximum aperture of the array and the values of dm, for m=1,2,…,M−2, are selected to give a uniform grid, with M being a large enough number to cover all potential locations of the sensors. Sparseness is then introduced by selecting the set of weight coefficients to give as few active locations as possible, while still giving a designed response that is close to the desired one.

In the first instance, this problem could be formulated as

where ||w||0 is the number of nonzero weight coefficients in w, pr is the vector holding the desired beam response at sampled frequency points Ωk and angle θl, k=0,1,⋯,K−1, l=0,1,⋯,L−1, S is the matrix composed of the steering vectors at the corresponding frequency Ωk and angle θl, and α places a limit on the allowed difference between the desired and the designed responses. In the constraint in (5) ||.||2 denotes the l2 norm.

In detail, pr and S are respectively given by

Here the desired response Pr(Ω,θ) can be obtained from that of a traditional uniform linear array, or simply assumed to be an ideal response (i.e. one at the mainlobe area and zero for the sidelobe area) and this is adopted in what follows.

In practice, the cost function in (5) will be replaced by the l1 norm,

The above formulation is effective in the design of narrowband arrays, where the TDL length J=1 (i.e. each sensor has only one weight coefficient attached) and the number of nonzero coefficients will be the same as the number of active sensors. In other words, any coefficient with a zero value will mean that the associated sensor is inactive. However, in the wideband case, to guarantee a sparse solution, the weight coefficients along a TDL have to be simultaneously minimized. When all coefficients along a TDL are zero-valued, we can then consider the corresponding location to be inactive and sparsity is introduced. To achieve this, similar to the technique used in complex-valued l1 norm minimization [17], we minimize a modified l1 norm as follows [18],

Then (7) can be rewritten as

where 0J is an all-zero 1×J row vector. A matrix ^S similar to (III) can be created from ^s, given by

In the above formulation, it is straightforward to add additional constraint to meet some specific design requirements. For example, we can add the response variation constraint RV=||LT^w||22≤σ2 derived in [22, 23] to design a sparse wideband array with frequency invariant beam response [19, 20, 21, 22], where the matrix L and the threshold value σ are formulated to make sure the change of response of the resultant beamformer with respect to different frequencies is limited to an acceptable level.

Moreover, to increase sparsity of the resultant array, we can adopt the reweighted l1 minimisation approach in [16] and reformulate (III) into the following form

Here ϵ>0 and i is the iteration number.

The above problem can be solved using cvx, a package for specifying and solving convex programs [24, 25].

In this section design examples are presented, which were all implemented on a computer with an Intel Core Duo CPU E6750 (2.66GHz) and 4GB of RAM. Comparisons will be drawn with a GA-based design method, which optimises the locations given a fixed number of sensors. In the GA based design, the fitness value was chosen to be J−1CLS, where JCLS is defined in [22].

In the following example, the reference pattern was that of an ideal array with the mainlobe at θm=90∘ and sidelobe regions of Θs=[0∘,80∘]⋃[100∘,180∘], which were sampled every 1∘. The frequency range of interest ΩI=[0.5π,π] was sampled every 0.05π, with the reference frequency Ωr=π. A grid of 100 potential sensor locations was spread uniformly over an aperture of 10λ, where the value of λ is the wavelength associated with a normalized frequency of Ω=π. The values α=0.9, σ=0.01, ϵ=9×10−4 and TDL length J=25 were used.

The resulting array using the reweighted method was made up of 11 active sensor locations as given in Tab. I, with its beam response shown in Fig. 2. It can be seen that the mainlobe is at the desired location for each normalised frequency and sufficient attenuation has been achieved in the sidelobe regions. The response also shows a good level of performance in terms of the FI property.

This was then compared to an array designed using the GA-based method. To allow a fair comparison, the GA was set to optimise 11 sensor locations over an aperture of 6.16λ, the same as the example given in Tab. I. Fig. 3 shows the resulting array response.All these show a good performance in terms of both sidelobe attenuation and the FI property.

Tab. II summarises the different performance measures for each design method. The main disadvantage of the GA design method is clearly shown, i.e. the computation time is significantly longer. The mean adjacent sensor spacings are the same in both cases and larger than the spacing of an equivalent ULA. This suggest some sparsity has been achieved, with the same level in both cases. Finally the value of |JCLS| is slightly lower for reweighted CS designed array, suggesting that in this instance the reweighted wideband CS method has provided a more desirable response (the difference largely being the FI property in the extremes of the sidelobe regions). This will not be guaranteed to be the case all the time.

In this paper, a CS-based method for the design of sparse wideband arrays has been proposed, where a modified l1 norm minimization problem is derived to simultaneously minimize the coefficients along a tapped delay-line associated with each sensor. Extra constraints can then be added to meet the specific design requirements, such as the frequency invariant constraint. To further improve the sparsity of the final design result, an iterative process is employed with a reweighting term introduced in the cost function. Design examples have been presented, with comparisons also drawn with a GA-based method. Similar performance levels are achieved but the GA design takes considerably longer to reach the solution, highlighting the advantage of our proposed design methods.