A Composition Theorem via Conflict Complexity 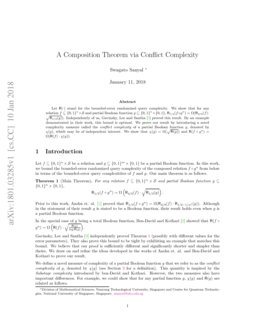 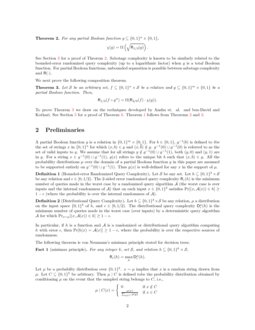 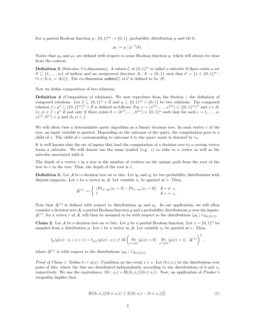 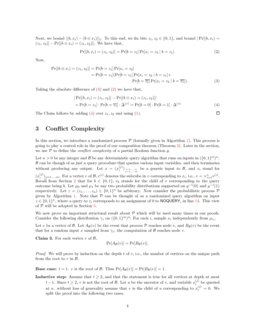 Gavinsky, Lee and Santha [3] independently proved Theorem 1 (possibly with different values for the error parameters). They also prove this bound to be tight by exhibiting an example that matches this bound. We believe that our proof is sufficiently different and significantly shorter and simpler than theirs. We draw on and refine the ideas developed in the works of Anshu et. al. and Ben-David and Kothari to prove our result.

We define a novel measure of complexity of a partial Boolean function g that we refer to as the conflict complexity of g, denoted by χ(g) (see Section 3 for a definition). This quantity is inspired by the Sabotage complexity introduced by ben-David and Kothari. However, the two measures also have important differences. For example, we could show that for any partial function g, χ(g) and \R(g) are related as follows.

We next prove the following composition theorem.

To prove Theorem 3 we draw on the techniques developed by Anshu et. al. and ben-David and Kothari. See Section 5 for a proof of Theorem 3. Theorem 1 follows from Theorems 2 and 3.

. All the probability distributions

μ over the domain of a partial Boolean function g in this paper are assumed to be supported entirely on g−1(0)∪g−1(1). Thus g(x) is well-defined for any x in the support of μ.

Let S be any set. Let h⊆{0,1}k×S be any relation and ϵ∈[0,1/2). The 2-sided error randomized query complexity \Rϵ(h) is the minimum number of queries made in the worst case by a randomized query algorithm A (the worst case is over inputs and the internal randomness of A) that on each input x∈{0,1}k satisfies Pr[(x,A(x))∈h]≥1−ϵ (where the probability is over the internal randomness of A).

Let h⊆{0,1}k×S be any relation, μ a distribution on the input space {0,1}k of h, and ϵ∈[0,1/2). The distributional query complexity \Dμϵ(h) is the minimum number of queries made in the worst case (over inputs) by a deterministic query algorithm A for which Prx∼μ[(x,A(x))∈h]≥1−ϵ.

In particular, if h is a function and A is a randomized or distributional query algorithm computing h with error ϵ, then Pr[h(x)=A(x)]≥1−ϵ, where the probability is over the respective sources of randomness.

Let μ be a probabilty distribution over {0,1}k. x∼μ implies that x is a random string drawn from μ. Let C⊆{0,1}k be arbitrary. Then μ∣C is defined tobe the probability distribution obtained by conditioning μ on the event that the sampled string belongs to C, i.e.,

For a partial Boolean function g:{0,1}m→{0,1}, probability distribution μ and bit b,

Notice that μ0 and μ1 are defined with respect to some Boolean function g, which will always be clear from the context.

We will often view a deterministic query algorithm as a binary decision tree. In each vertex v of the tree, an input variable is queried. Depending on the outcome of the query, the computation goes to a child of v. The child of v corresponding to outcome b to the query made is denoted by vb.

It is well known that the set of inputs that lead the computation of a decision tree to a certain vertex forms a subcube. We will denote use the same symbol (e.g. v) to refer to a vertex as well as the subcube associated with it.

The depth of a vertex v in a tree is the number of vertices on the unique path from the root of the tree to v in the tree. Thus, the depth of the root is 1.

Let A be a decision tree on m bits. Let η0 and η1 be two probability distributions with disjoint supports. Let v be a vertex in A. Let variable xi be queried at v. Then,

Let A be a decision tree on m bits. Let g be a partial Boolean function. Let x∼{0,1}n be sampled from a distribution μ. Let v be a vertex in A. Let variable xi be queried at v. Then,

Define b:=g(x). Condition on the event x∈v. Let (b⊗xi) be the distribution over pairs of bits, where the bits are distributed independently according to the distributions of b and xi respectively. We use the equivalence: \I(b:xi)=\Div((b,xi)||(b⊗xi)). Now, an application of Pinsker’s inequality implies that

Taking the absolute difference of (2) and (2) we have that,

In this section, we introduce a randomized process P (formally given in Algorithm 1). This process is going to play a central role in the proof of our composition theorem (Theorem 3). Later in the section, we use P to define the conflict complexity of a partial Boolean function g.

Let n>0 be any integer and B be any deterministic query algorithm that runs on inputs in ({0,1}m)n. B can be though of as just a query procedure that queries various input variables, and then terminates without producing any output. Let x=(x(j)i)i=1,…,nj=1,…,m be a generic input to B, and xi stand for (x(j)i)j=1,…,m. For a vertex v of B,v(i) denotes the subcube in v corresponding to xi, i.e., v=×ni=1v(i). Recall from Section 2 that for b∈{0,1}, vb stands for the child of v corresponding to the query outcome being b. Let μ0 and μ1 be any two probability distributions supported on g−1(0) and g−1(1) respectively. Let z=(z1,…,zn)∈{0,1}n be arbitrary. Now consider the probabilistic process P given by Algorithm 1. Note that P can be thought of as a randomized query algorithm on input z∈{0,1}n, where a query to zi corresponds to an assignment of 0 to NOQUERYi in line 2. This view of P will be adopted in Section 5.

We now prove an important structural result about P which will be used many times in our proofs. Consider the following distribution γz on ({0,1}m)n: For each i, sample xi independently from μzi.

For each vertex v of B,

We will prove by induction on the depth t of v, i.e., the number of vertices on the unique path from the root to v in B.

Assume that t≥2, and that the statement is true for all vertices at depth at most t−1. Since t≥2, v is not the root of B. Let u be the ancestor of v, and variable x(j)i be queried at u. without loss of generality assume that v is the child of u corresponding to x(j)i=0. We split the proof into the following two cases.

The conflict complexity of a partial Boolean function g with respect to distributions μ0 and μ1 supported on g−1(0) and g−1(1) respectively, and decision tree B computing g, is defined as:

The conflict complexity of g is defined as:

Where the maximum is over distributions μ0 and μ1 supported on g−1(0) and g−1(1) respectively, and the minimum is over decision trees B computing g.

For a pair (μ0,μ1) of distributions, let B be the decision tree computing g such that \E[N] is minimized. We call such a decision tree an optimal decision tree for μ0,μ1. We conclude this section by making an important observation about the structure of optimal decision trees. Let v be any node of B. Let μ′0:=μ0∣v and μ′1:=μ1∣v. Let Bv denote the subtree of B rooted at v. We observe that Bv is an optimal tree for μ′0 and μ′1; if it is not then we could replace it by an optimal tree for μ′0 and μ′1, and for the resultant tree, the expected value of N with respect to μ0 and μ1 will be smaller than that in B. This will contradict the optimality of B. This recursive sub-structure property of optimal trees will be helpful to us.

In this section, we will prove Theorem 2 (restated below). See 2

We will bound the distributional query complexity of g for each input distribution μ with rspect to error 47/95<1/2, \Dμ47/95(g), from above by O(χ(g)2). Theorem 2 will follow from the minimax principle (Fact 1), and the observation that the error can be brought down to 1/3 by constantly many independent repetitions followed by a selection of the majority of the answers. It is enough to consider distributions μ supported on valid inputs of g. To this end, fix a distribution μ supported only on g−1(0)∪g−1(1).

Let χ(g)=d. Let μb be the distribution obtained by conditioning μ on the event g(x)=b. Let B be an optimal decision tree for distributions μ0 and μ1. Clearly \E[N]≤χ(g)=d.

We first prove some structural results about B. Let B be run on a random input x sampled according to μ. Let vt be the random vertex at which the t-th query is made; If B terminates before making t queries, define vt:=⊥. Let E be any event which is a collection of possible transcripts of B, such that Pr[E]≥34. Recall from Section 2 that for any vertex v of B, Δ(v) is assumed to be with respect to the probability distribution μ∣v.

Let us sample vertices ut of B as follows:

By Claim 3, and since z has the same distribution as that of g(x) where x is sampled from μ, the vertices ut and vt have the same distribution. In the above sampling process for each t=1,…,10d, let Et be the event that \nq1=1 in the beginning of the t-th iteration of the while loop of Algorithm 1. Conditioned on E, the probability that \nq1 is set to 0 in the t-th iteration is Pr[Et∣E]⋅\E[Δ(ut)∣Et,E]222Note that conditioned on Et, ut≠⊥.. By union bound we have that,

Now, since \E[N]≤χ(g)=d, we have by Markov’s inequality that the probability that the process P, when run for B,μ0,μ1 and the random bit z generated as above333Recall that the distribution of N is independent of z., sets \nq1 to 0 within first 10d iterations of the while loop, is at least 9/10. Thus we have that,

The next Lemma follows from Claim 4 and the recursive sub-structure property of optimal trees discussed in the last paragraph of Section 3.

Let i be any positive integer. Then,

Notice that if B terminates before making t queries, vt=⊥ and Δ(vt)=1.

For j=1,…,i, let w be any vertex at depth 10jd+1. Consider the subtree T of B rooted at w. By the recursive sub-structure property of B, T is an optimal tree for distributions μ′0:=μ0∣w,μ′1:=μ1∣w. Let wt be the random vertex at depth t of T, when T is run on a random input from μ∣w. By Claim 4, we have that,

Consider the following decision tree B′: Start simulating B. Terminate the simulation if one of the following events occurs. The outputs in each case is specified below.

We split the proof into the following two cases.

Then, condition on the event STOP. The probability that B′ errs is 0≤13.

By Claim 5 we have that

Let ai:=(xi,bi) be the tuple formed by the random input variable xi queried at the i-th step by B′, and the outcome bi of the query; if B′ terminates before i-th step, ai:=⊥. Notice that the vertex vi at which the i-th query is made is determined by (a1,…,ai−1) and vice versa. We have,