A Compiler for Ordered Logic Programs 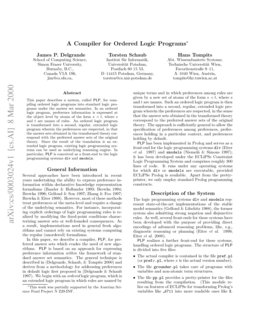 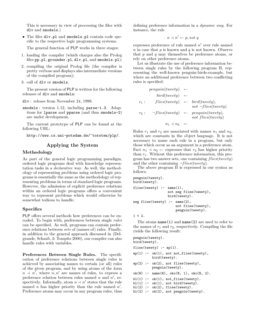 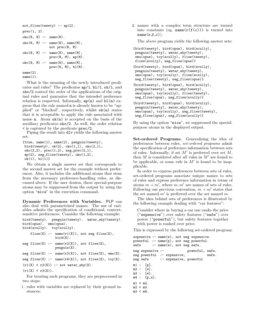 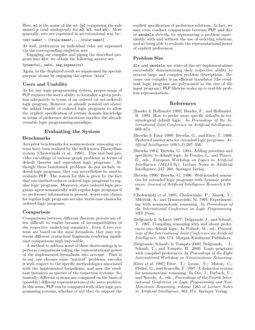 Several approaches have been introduced in recent years undertaking the ability to express preference information within declarative knowledge representation formalisms [Baader & Hollunder1993, Brewka1994, Brewka1996, Gelfond & Son1997, Zhang & Foo1997, Brewka & Eiter1999]. However, most of these methods treat preferences at the meta-level and require a change of the underlying semantics. For instance, incorporating explicit orderings of logic programming rules is realized by modifying the fixed-point conditions characterizing answer sets or well-founded consequences. As a result, implementations need in general fresh algorithms and cannot rely on existing systems computing the regular (unordered) formalisms.

In this paper, we describe a compiler, PLP, for preferred answer sets which evades the need of new algorithms. PLP is based on an approach for expressing preference information within the framework of standard answer set semantics. The general technique is described in [Delgrande, Schaub, & Tompits2000] and derives from a methodology for addressing preferences in default logic first proposed in [Delgrande & Schaub1997]. We begin with an ordered logic program, which is an extended logic program in which rules are named by unique terms and in which preferences among rules are given by a new set of atoms of the form s≺t, where s and t are names. Such an ordered logic program is then transformed into a second, regular, extended logic program wherein the preferences are respected, in the sense that the answer sets obtained in the transformed theory correspond to the preferred answer sets of the original theory. The approach is sufficiently general to allow the specification of preferences among preferences, preferences holding in a particular context, and preferences holding by default.

PLP has been implemented in Prolog and serves as a front-end for the logic programming systems dlv [Eiter et al.1997] and smodels [Niemelä & Simons1997]; it has been developed under the ECLiPSe Constraint Logic Programming System and comprises roughly 300 lines of code. It runs under any operating systems for which dlv or smodels are executable, provided ECLiPSe Prolog is available. Apart from the pretty-printer, we only employ standard Prolog programming constructs.

2 Description of the System

PLP realizes a further front-end for these systems, handling ordered logic programs. The structure of PLP is divided into five files:

The general function of PLP works in three stages:

The present version of PLP is written for the following releases of dlv and smodels:

The current prototype of PLP can be found at the following URL:

PLP offers several methods how preferences can be encoded. To begin with, preferences between single rules can be specified. As well, programs can contain preference relations between sets of (names of) rules. Finally, in addition to the general approach discussed in [Delgrande, Schaub, & Tompits2000], our compiler can also handle rules with variables.

The specification of preference relations between single rules is achieved by associating names to certain (or all) rules of the given program, and by using atoms of the form n≺n′, where n,n′ are names of rules, to express a preference relation between rules named n and n′, respectively. Informally, atom n≺n′ states that the rule named n has higher priority than the rule named n′. Preference atoms may occur in any program rules, thus defining preference information in a dynamic way. For instance, the rule

Let us illustrate the use of preference information between single rules by the following program Π, representing the well-known penguin-birds-example, but where an additional preference between two conflicting rules is specified:

Rules r1 and r2 are associated with names n1 and n2, which are constants in the object language. It is not necessary to name each rule in a program, but only those which occur as an argument in a preference atom. Fact n1≺n2← expresses that r2 has higher priority than r1. Without this preference information, this program has two answer sets, one containing flies(tweety) and the other containing ¬flies(tweety).

What is the meaning of the newly introduced predicates and rules? The predicates ap/1, bl/1, ok/1, and oko/2 control the order of the applications of the original rules and guarantee that the intended preference relation is respected. Informally, ap(n) and bl(n) express that the rule named n is already known to be “applied” or “blocked”, respectively, whilst ok(n) states that it is acceptable to apply the rule associated with name n. Atom ok(n) is accepted on the basis of the auxiliary predicates oko/2. As well, the order relation < is captured by the predicate prec/2.

Piping the result into dlv yields the following answer set:

We obtain a single answer set that corresponds to the second answer set for the example without preferences. Also, it includes the additional atoms that stem from the necessary preference-handling rules, as discussed above. If the user desires, these special-purpose atoms may be suppressed from the output by using the option “nice” in the execution command.

The above program yields the following answer sets:

By using the option “nice”, we suppressed the special-purpose atoms in the displayed output.

Generalizing the idea of preferences between rules, set-ordered programs admit the specification of preference information between sets of rules. Informally, if set M′ is preferred over set M, then M is considered after all rules in M′ are found to be applicable, or some rule in M′ is found to be inapplicable.

The idea behind sets of preferences is illustrated by the following example dealing with “car features”:

Consider where in buying a car one ranks the price (“expensive”) over safety features (“safe”) over power (“powerful”), but safety features together with power is ranked over price.

As well, preferences on individual rules are expressed via the corresponding singleton sets.

Engaging our compiler and piping the described program into dlv, we obtain the following answer set:

Again, in the displayed result we suppressed the special-purpose atoms by engaging the option “nice”.

As for any logic programming system, proper usage of PLP requires the user’s ability to formalize a given problem adequately in terms of an ordered (or set-ordered) logic program. However, as already pointed out above, the added benefit of ordered logic programs to allow the explicit specification of certain domain knowledge in terms of preference declarations enriches the already versatile logic programming paradigm.

Comparisons between different theorem provers are often difficult to realize because of incompatibilities of the respective underlying semantics. Even if two systems are based on the same formalism, they may represent different syntactical fragments rendering significant comparisons nigh impossible.

A method to address some of these shortcomings is to perform comparisons taking the representational power of the implemented formalisms into account. That is to say, one chooses some “natural” problems, encodes it with respect to the specific methodologies associated with the implemented formalisms, and uses the resultant instances as queries of the respective systems. So, basically, different systems are compared on the basis of (possibly) different representations of the same problem. In this sense, PLP can be compared with other logic programming systems, whether or not they do support the explicit specification of preference relations. In fact, we may even conduct comparisons between PLP and dlv or smodels directly, by representing a problem equivalently with and without the use of ordering relations, and so being able to evaluate the representational power of explicit preferences.

dlv and smodels are state-of-the-art implementations successfully demonstrating their respective ability to process large and complex problem descriptions. Because our compiler is an efficient translator (the resultant logic programs are polynomial in the size of the input program), PLP likewise scales up to real-life problem representations.