The choice of modeling units is critical to automatic speech recognition (ASR) tasks. Conventional ASR systems typically choose context-dependent states (CD-states) or context-dependent phonemes (CD-phonemes) as their modeling units. However, it has been challenged by sequence-to-sequence attention-based models, which integrate an acoustic, pronunciation and language model into a single neural network. On English ASR tasks, previous attempts have shown that the modeling unit of graphemes can outperform that of phonemes by sequence-to-sequence attention-based model. In this paper, we are concerned with modeling units on Mandarin Chinese ASR tasks using sequence-to-sequence attention-based models with the Transformer. Five modeling units are explored including context-independent phonemes (CI-phonemes), syllables, words, sub-words and characters. Experiments on HKUST datasets demonstrate that the lexicon free modeling units can outperform lexicon related modeling units in terms of character error rate (CER). Among five modeling units, character based model performs best and establishes a new state-of-the-art CER of 26.64% on HKUST datasets without a hand-designed lexicon and an extra language model integration, which corresponds to a 4.8% relative improvement over the existing best CER of 28.0% by the joint CTC-attention based encoder-decoder network. 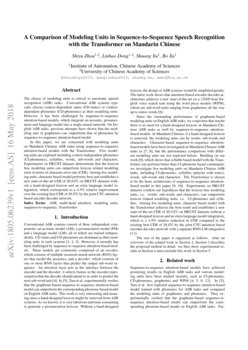 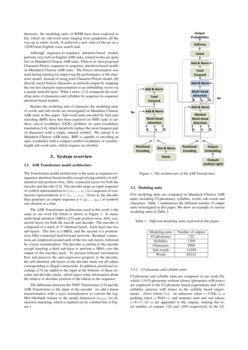 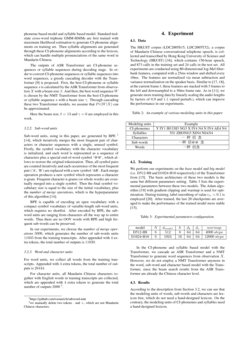 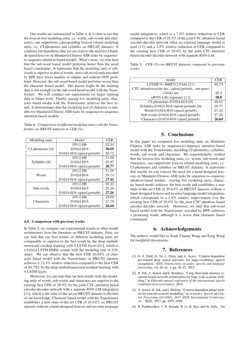 Conventional ASR systems consist of three independent components: an acoustic model (AM), a pronunciation model (PM) and a language model (LM), all of which are trained independently. CD-states and CD-phonemes are dominant as their modeling units in such systems [1, 2, 3]. However, it recently has been challenged by sequence-to-sequence attention-based models. These models are commonly comprised of an encoder

, which consists of multiple recurrent neural network (RNN) layers that model the acoustics, and a

decoder, which consists of one or more RNN layers that predict the output sub-word sequence. An attention layer acts as the interface between the encoder and the decoder: it selects frames in the encoder representation that the decoder should attend to in order to predict the next sub-word unit [4]. In [5], Tara et al. experimentally verified that the grapheme-based sequence-to-sequence attention-based model can outperform the corresponding phoneme-based model on English ASR tasks. This work is very interesting and amazing since a hand-designed lexicon might be removed from ASR systems. As we known, it is very laborious and time-consuming to generate a pronunciation lexicon. Without a hand-designed lexicon, the design of ASR systems would be simplified greatly. Furthermore, the latest work shows that attention-based encoder-decoder architecture achieves a new state-of-the-art WER on a 12500 hour English voice search task using the word piece models (WPM), which are sub-word units ranging from graphemes all the way up to entire words [6].

Since the outstanding performance of grapheme-based modeling units on English ASR tasks, we conjecture that maybe there is no need for a hand-designed lexicon on Mandarin Chinese ASR tasks as well by sequence-to-sequence attention-based models. In Mandarin Chinese, if a hand-designed lexicon is removed, the modeling units can be words, sub-words and characters. Character-based sequence-to-sequence attention-based models have been investigated on Mandarin Chinese ASR tasks in [7, 8], but the performance comparison with different modeling units are not explored before. Building on our work [9], which shows that syllable based model with the Transformer can perform better than CI-phoneme based counterpart, we investigate five modeling units on Mandarin Chinese ASR tasks, including CI-phonemes, syllables (pinyins with tones), words, sub-words and characters. The Transformer is chosen to be the basic architecture of sequence-to-sequence attention-based model in this paper [9, 10]. Experiments on HKUST datasets confirm our hypothesis that the lexicon free modeling units, i.e. words, sub-words and characters, can outperform lexicon related modeling units, i.e. CI-phonemes and syllables. Among five modeling units, character based model with the Transformer achieves the best result and establishes a new state-of-the-art CER of 26.64% on HKUST datasets without a hand-designed lexicon and an extra language model integration, which is a 4.8% relative reduction in CER compared to the existing best CER of 28.0% by the joint CTC-attention based encoder-decoder network with a separate RNN-LM integration [11].

The rest of the paper is organized as follows. After an overview of the related work in Section 2, Section 3 describes the proposed method in detail. we then show experimental results in Section 4 and conclude this work in Section 5.

Sequence-to-sequence attention-based models have achieved promising results on English ASR tasks and various modeling units have been studied recently, such as CI-phonemes, CD-phonemes, graphemes and WPM [4, 5, 6, 12]. In [5], Tara et al. first explored sequence-to-sequence attention-based model trained with phonemes for ASR tasks and compared the modeling units of graphemes and phonemes. They experimentally verified that the grapheme-based sequence-to-sequence attention-based model can outperform the corresponding phoneme-based model on English ASR tasks. Furthermore, the modeling units of WPM have been explored in [6], which are sub-word units ranging from graphemes all the way up to entire words. It achieved a new state-of-the-art WER on a 12500 hour English voice search task.

[13] compared the modeling units of characters and syllables by sequence-to-sequence attention-based models.

Besides the modeling unit of character, the modeling units of words and sub-words are investigated on Mandarin Chinese ASR tasks in this paper. Sub-word units encoded by byte pair encoding (BPE) have been explored on neural machine translation (NMT) tasks to address out-of-vocabulary (OOV) problem on open-vocabulary translation

[14], which iteratively replace the most frequent pair of characters with a single, unused symbol. We extend it to Mandarin Chinese ASR tasks. BPE is capable of encoding an open vocabulary with a compact symbol vocabulary of variable-length sub-word units, which requires no shortlist.

The Transformer model architecture is the same as sequence-to-sequence attention-based models except relying entirely on self-attention and position-wise, fully connected layers for both the encoder and decoder [15]. The encoder maps an input sequence of symbol representations x = (x1,...,xn) to a sequence of continuous representations z = (z1,...,zn). Given z, the decoder then generates an output sequence y = (y1,...,ym) of symbols one element at a time.

The ASR Transformer architecture used in this work is the same as our work [9] which is shown in Figure 1. It stacks multi-head attention (MHA) [15] and position-wise, fully connected layers for both the encode and decoder. The encoder is composed of a stack of N

identical layers. Each layer has two sub-layers. The first is a MHA, and the second is a position-wise fully connected feed-forward network. Residual connections are employed around each of the two sub-layers, followed by a layer normalization. The decoder is similar to the encoder except inserting a third sub-layer to perform a MHA over the output of the encoder stack. To prevent leftward information flow and preserve the auto-regressive property in the decoder, the self-attention sub-layers in the decoder mask out all values corresponding to illegal connections. In addition, positional encodings

[15] are added to the input at the bottoms of these encoder and decoder stacks, which inject some information about the relative or absolute position of the tokens in the sequence.

The difference between the NMT Transformer [15]

and the ASR Transformer is the input of the encoder. we add a linear transformation with a layer normalization to convert the log-Mel filterbank feature to the model dimension

dmodel for dimension matching, which is marked out by a dotted line in Figure 1.

Five modeling units are compared on Mandarin Chinese ASR tasks, including CI-phonemes, syllables, words, sub-words and characters. Table 1 summarizes the different number of output units investigated by this paper. We show an example of various modeling units in Table 2.

Here the beam size β=13 and γ=6 are employed in this work.

Sub-word units, using in this paper, are generated by BPE 111https://github.com/rsennrich/subword-nmt [14]

, which iteratively merges the most frequent pair of characters or character sequences with a single, unused symbol. Firstly, the symbol vocabulary with the character vocabulary is initialized, and each word is represented as a sequence of characters plus a special end-of-word symbol ‘@@’, which allows to restore the original tokenization. Then, all symbol pairs are counted iteratively and each occurrence of the most frequent pair (‘A’, ‘B’) are replaced with a new symbol ‘AB’. Each merge operation produces a new symbol which represents a character n-gram. Frequent character n-grams (or whole words) are eventually merged into a single symbol. Then the final symbol vocabulary size is equal to the size of the initial vocabulary, plus the

, which is the hyperparameter of this algorithm

BPE is capable of encoding an open vocabulary with a compact symbol vocabulary of variable-length sub-word units, which requires no shortlist. After encoded by BPE, the sub-word units are ranging from characters all the way up to entire words. Thus there are no OOV words with BPE and high frequent sub-words can be preserved.

In our experiments, we choose the number of merge operations 5000, which generates the number of sub-words units 11035 from the training transcripts. After appended with 4 extra tokens, the total number of outputs is 11039.

For word units, we collect all words from the training transcripts. Appended with 4 extra tokens, the total number of outputs is 28444.

The HKUST corpus (LDC2005S15, LDC2005T32), a corpus of Mandarin Chinese conversational telephone speech, is collected and transcribed by Hong Kong University of Science and Technology (HKUST) [16]

, which contains 150-hour speech, and 873 calls in the training set and 24 calls in the test set. All experiments are conducted using 80-dimensional log-Mel filterbank features, computed with a 25ms window and shifted every 10ms. The features are normalized via mean subtraction and variance normalization on the speaker basis. Similar to

[17, 18], at the current frame t, these features are stacked with 3 frames to the left and downsampled to a 30ms frame rate. As in [11], we generate more training data by linearly scaling the audio lengths by factors of 0.9 and 1.1 (speed perturb.), which can improve the performance in our experiments.

We perform our experiments on the base model and big model (i.e. D512-H8 and D1024-H16 respectively) of the Transformer from [15]. The basic architecture of these two models is the same but different parameters setting. Table 3 lists the experimental parameters between these two models. The Adam algorithm [19]

with gradient clipping and warmup is used for optimization. During training, label smoothing of value

ϵls=0.1 is employed [20]. After trained, the last 20 checkpoints are averaged to make the performance more stable [15].

In Table 6, we compare our experimental results to other model architectures from the literature on HKUST datasets. First, we can find that our best results of different modeling units are comparable or superior to the best result by the deep multidimensional residual learning with 9 LSTM layers [21], which is a hybrid LSTM-HMM system with the modeling unit of CD-states. We can observe that the best CER 26.64% of character based model with the Transformer on HKUST datasets achieves a 13.4% relative reduction compared to the best CER of 30.79% by the deep multidimensional residual learning with 9 LSTM layers. It shows the superiority of the sequence-to-sequence attention-based model compared to the hybrid LSTM-HMM system.

In this paper we compared five modeling units on Mandarin Chinese ASR tasks by sequence-to-sequence attention-based model with the Transformer, including CI-phonemes, syllables, words, sub-words and characters. We experimentally verified that the lexicon free modeling units, i.e. words, sub-words and characters, can outperform lexicon related modeling units, i.e. CI-phonemes and syllables on HKUST datasets. It represents that maybe we can remove the need for a hand-designed lexicon on Mandarin Chinese ASR tasks by sequence-to-sequence attention-based models. Among five modeling units, character based model achieves the best result and establishes a new state-of-the-art CER of 26.64% on HKUST datasets without a hand-designed lexicon and an extra language model integration, which corresponds to a 4.8% relative improvement over the existing best CER of 28.0% by the joint CTC-attention based encoder-decoder network. Moreover, we find that sub-word based model with the Transformer, encoded by BPE, achieves a promising result, although it is slightly worse than character based counterpart.

The authors would like to thank Chunqi Wang and Feng Wang for insightful discussions.