Efficient and accurate numerical simulation of seismic wave propagation is important in various Geophysical applications such as seismic full waveform inversion (FWI) problem. However, due to the large size of the physical domain and requirement on low numerical dispersion, many existing numerical methods are inefficient for numerical modelling of seismic wave propagation in a heterogeneous media. Despite the great efforts that have been devoted during the past decades, it still remains a challenging task in the development of efficient and accurate finite difference method for the multi-dimensional acoustic wave equation with variable velocity. In this paper, we proposed a Padé approximation based finite difference scheme for solving the acoustic wave equation in three-dimensional heterogeneous media. The new method is obtained by combining the Padé approximation and a novel algebraic manipulation. The efficiency of the new algorithm is further improved through the Alternative Directional Implicit (ADI) method. The stability of the new algorithm has been theoretically proved by the energy method. The new method is conditionally stable with a better Courant - Friedrichs - Lewy condition (CFL) condition, which has been verified numerically. Extensive numerical examples have been solved, which demonstrated that the new method is accurate, efficient and stable. 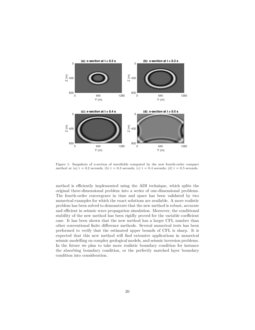 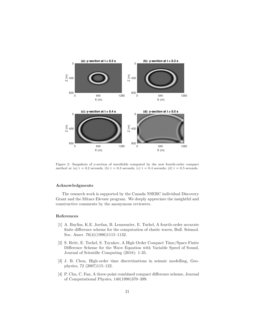 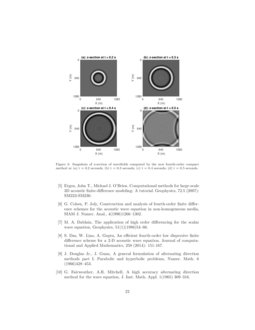 In this paper, we consider the development and analysis of a new explici...
Da Li, et al. ∙

Fuzzy Transform (F-transform) has been introduced as an approximation me...
Rafael Aleixo, et al. ∙

A parallel hybrid implementation of the 2D acoustic wave equation

In this paper, we propose a hybrid parallel programming approach for a n...
Arshyn Altybay, et al. ∙

Finite difference (FD) method has been widely used in various science and engineering applications for several reasons such as easy implementation, high efficiency etc, when the analytical solution is not available. One example is the acoustic wave equation when a non-zero point source function is included in the equation. In particular, the high-order FD methods have attracted the interests of many researchers working on seismic modelling (see Chen2007 ; Cohen1996 ; Liu2009a ; Takeuchi2000 and references therein) due to the high-order accuracy and effectiveness in suppressing numerical dispersion. Moreover, the number of grid points per wavelength required by higher order FD methods is significantly less than that of the conventional FD methods.

Recently, a great deal of efforts have been devoted to develop high-order FD schemes for the acoustic equations, and many accurate and efficient methods have been developed. Levander Levander1988 addressed the cost-effectiveness of solving real problems using high-order spatial derivatives to allow a more coarse spatial sample rate. In Liu2009a , the authors used a plane wave theory and the Taylor series expansion to develop a low dispersion time-space domain FD scheme with error O(τ2+h2M) for 1-D, 2-D and 3-D acoustic wave equations, where τ and h represent the time step and spatial grid size, respectively. It was then shown that, along certain fixed directions the error can be improved to O(τ2M+h2M). In Cohen1996 , Cohen and Poly extended the works of Dablain Dablain1986 , Shubin and Bell Shubin1987 and Bayliss et al. Bayliss1986 and developed a fourth-order accurate explicit scheme with error of O(τ4+h4) to solve the heterogeneous acoustic wave equation. Moreover, it has been reported that highly accurate numerical methods are very effective in suppressing the annoying numerical dispersion Finkelstein2007 . High-order FD method is of particular importance for large-scale 3D acoustic wave equation, as it requires less grid pointsEtgen2007 .

with fourth-order accuracy. To overcome these difficulties, a variety of compact higher-order FD schemes have been developed for hyperbolic, parabolic and elliptical partial differential equations. In

Chu1998 , the authors developed a family of fourth-order three-point combined difference schemes to approximate the first- and second-order spatial derivatives. In Kim2007 , the authors introduced a family of three-level implicit FD schemes which incorporate the locally one-dimensional method. For more recent compact higher-order difference methods, the readers are referred to Shukla2005 .

For three-dimensional problems, an implicit scheme results in a block tridiagonal system, which is solved at each time step. Direct solution of such large block linear system is very inefficient, therefore, some operator splitting techniques are used to convert the three-dimensional problem into a sequence of one-dimensional problems. One widely used method is the ADI method, which was originally introduced by Peaceman and Rachford Peaceman1955 to solve parabolic and elliptic equations. Since then a lot of developments have been made over the years for hyperbolic equations Douglas1966 ; Lees1962 . Later, Fairweather and Mitchell Fairweather1965 developed a fourth-order compact ADI scheme for solving the wave equation. Some other related work can be found in Li1991 ; Ristow1997 . Combined with Padé approximation of the finite difference operator, some efficient and high-order compact finite difference methods have been developed to solve the acoustic wave equations in 2D and 3D with constant velocity Das2014 ; Liao2014 . However when the velocity is a spatially varying function, it is difficult to apply this technique because the algebraic manipulation is not applicable here. Nevertheless, some research work on accurate and low-dispersion numerical simulation of acoustic wave propagation in heterogeneous media have been reportedZhang2011 , in which a layered model consisting of multiple horizontal homogeneous layers was considered, with the method development and stability analysis are based on constant velocity model.

In Liao2018 a new fourth-order compact ADI FD scheme was proposed to solve the two-dimensional acoustic wave equation with spatially variable velocity. Here we extended this method and the Padé approximation based high-order compact FD scheme in Das2014 to the 3D acoustic wave equation with non-constant velocity. The new method is compact and efficient, with fourth-order accuracy in both time and space. To our best knowledge, it is the first time that the energy method has been used to conduct theoretical stability analysis of the Padé-approximation based compact scheme. It has been shown that the obtained stability condition (CFL condition) is highly consistent to the CFL condition obtained by other methods. The rest of the paper is organized as the follows. We first give a brief introduction of the acoustic wave equation and several existing standard second-order central FD schemes, compact high-order FD schemes for spatial derivatives and some other related high-order method in Section 2, then derive the new compact fourth-order ADI FD scheme in Section 3. Stability analysis of the new method is presented in Section 4, which is followed by three numerical examples in Section 5. Finally, the conclusions and some future works are discussed in Section 6.

where ν(x,y,z) represents the wave velocity. Here Ω⊂R3 is a finite computational domain and s(x,y,z,t) is the source function. We denote c(x,y,z)=ν2(x,y,z) for the sake of simple notation.

The standard second-order central FD schemes are then given by approximating the second derivatives in Eq.(1). For example,

The approximations of uyy and uzz are similar to Eq. (6).

To improve the method to fourth-order in space, the conventional high-order FD method was derived by approximating the derivatives using more than three points in one direction, which results in larger stencil. For instance, if 2M+1 points are used to approximate uxx, one can obtain the following formula

which can be as accurate as (2M)th-order in x. The conventional high-order FD method is accurate in space but suffers severe numerical dispersion. Another issue is that it requires more computer memory due to the larger stencil for implicit method. Moreover, more points are needed to approximate the boundary condition.

To develop a high-order compact ADI FD scheme, we apply the Padé approximation to the second-order central FD operators, so the second derivatives utt,uxx,uyy and uzz can approximated with fourth-order accuracy. For example,

The fourth-order approximations of uyy and uzz can be obtained similarly.

Truncation error analysis shows that the algorithm is fourth-order accurate in time and space with the truncation error O(τ4+h4x+h4y+h4z), provided the solution u(x,y,z,t) and c(x,y,z) satisfy certain smoothness conditions. As shown in Liao2018 , the difficulty to develop high-order compact scheme for wave equation with non-constant velocity is that, one can not multiply the operator

Now we extend the novel algebraic manipulation introduced in Liao2018 to the three-dimensional acoustic wave equation with variable velocity. We first demonstrate the difficulty in applying the Padé approximation to the finite difference operator for solving the acoustic wave equation with non-constant velocity. Multiplying the operator in Eq. (11) to Eq. (10) yields

We use the first term on the right-hand side to illustrate the issue here. Since (1+δ2x12), (1+δ2y12) and (1+δ2z12) are commutative, we change the order of the three finite difference operators to obtain

To solve this problem, a novel factorization technique is used to preserve the compactness and fourth-order convergence of the numerical scheme. Multiplying (1+δ2t12) to Eq. (10) yields

Collecting the term δ2tuni,j,k, we have

Factoring the left-hand side of Eq. (16) yields

where the factorization error is given by

Using Taylor series, one can verify that ERR=O(τ6), provided that c(x,y,z) and u(x,y,z,t) satisfy some conditions on smoothness. The result regarding the order of the truncation error is included in the following theorem.

where τ,hx,hy and hz are the step sizes in time, x,y and z, respectively.

Note the difference between Eq. (25) and Eq. (26) is O(h6y+h6z), therefore, the method is still fourth-order in space. It is worth to mention that the right-hand side of Eq. (26) includes larger stencil in both y and z directions. Furthermore, larger stencil needs values of uni,j,k outside the boundary when j=2,Ny−1 and k=2,Nz−1. To overcome this problem, we use one-sided approximation to approximate the values outside of the boundary. For example, uni,0,k is approximated by a linear combination of uni,1,k,⋯,uni,4,k with fourth-order accuracy. This boundary treatment is not complicate in terms of implementation, since it only involves the values at time level n, which is known. Similarly, dividing ci,j,k then multiplying (1+δ2y12) to both sides of Eq. (23) lead to

Finally, Eq. (24) can be transformed to the equivalent linear system