We consider an additive Vanka-type smoother for the Poisson equation discretized by the standard finite difference centered scheme. Using local Fourier analysis, we derive analytical formulas for the optimal smoothing factors for two types of smoothers, called vertex-wise and element-wise Vanka smoothers, and present the corresponding stencils. Interestingly, in one dimension the element-wise Vanka smoother is equivalent to the scaled mass operator obtained from the linear finite element method, and in two dimensions the element-wise Vanka smoother is equivalent to the scaled mass operator discretized by bilinear finite element method plus a scaled identity operator. Based on these discoveries, the mass matrix obtained from finite element method can be used as an approximation to the inverse of the Laplacian, and the resulting mass-based relaxation scheme features small smoothing factors in one, two, and three dimensions. Advantages of the mass operator are that the operator is sparse and well conditioned, and the computational cost of the relaxation scheme is only one matrix-vector product; there is no need to compute the inverse of a matrix. These findings may help better understand the efficiency of additive Vanka smoothers and develop fast solvers for numerical solutions of partial differential equations. 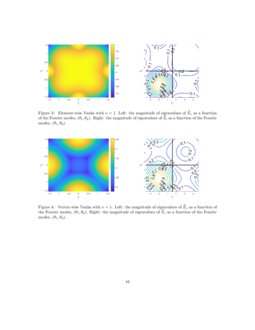 We show that the mass matrix derived from finite elements can be effecti...
Chen Greif, et al. ∙

Easy and Efficient preconditioning of the Isogeometric Mass Matrix

Finite Element Integration with Quadrature on the GPU

Consider the Poisson equation in one dimension (1D) or two dimensions (2D):

where u=u(x) and f=f(x) in 1D or u=u(x,y) and f=f(x,y) in 2D. The function f is assumed to be sufficiently smooth so that finite-difference discretizations of u provide effective approximations of the solution. The differential operator Δ stands for the Laplacian: Δ≡d2dx2 in 1D and Δ≡∂2∂x2+∂2∂y2 in 2D. We assume a uniform mesh discretization with meshsize h.

We apply the standard three- and five-point finite difference discretizations for the Laplacian; the corresponding stencils are given by

Let us denote the corresponding linear system by

The numerical solution of (4) is one of the most extensively explored topics in the numerical linear algebra literature. The discrete Laplacian Ah

is a symmetric positive definite M-matrix, its eigenvalues are explicitly known, and it is used as a primary benchmark problem for the development of fast solvers. When the problem is large, iterative solvers that allow a high level of parallelism are often preferred.

One of the most efficient methods for solving (4) is multigrid [stuben1982multigrid, MR1156079]. The choice of multigrid components, such as a relaxation scheme as a smoother, plays an important role in the design of fast methods.

The choice of additive Vanka as relaxation scheme, which is suitable for parallel computing, has recently drawn considerable attention. Vanka-type smoothers have been applied to the Navier–Stokes equations [john2002higher, SManservisi_2006a, SPVanka_1986a], the Poisson equation using continuous and discontinuous finite elements methods [he2021local], the Stokes equations with finite element methods [farrell2021local, voronin2021low], poroelasticity equations [adler2021monolithic] in monolithic multigrid, and other problems. A restricted additive Vanka for Stokes using Q1−Q1 discretizations is presented in [saberi2021restricted], which shows its competitiveness with the multiplicative Vanka smoother. Nonoverlapping block smoothing using different patches has been discussed in [claus2021nonoverlapping] for the Stokes equations discretized by the marker-and-cell scheme. Muliplicative Vanka smoothers in combination with multigrid methods are discussed in [MR4024766, de2021two, franco2018multigrid]. Vanka-type relaxation has been used in many contexts, and for more details, we refer the reader to [JAdler_etal_2015b, john2002higher, VJohn_LTobiska_2000a].

In the literature, Vanka-type relaxation schemes demonstrate their high efficiency in a multigrid setting, but there seems no theoretical analysis for the convergence speed even for the simple Poisson equation. In this work we take steps towards closing this gap by considering the additive Vanka relaxation for the Poisson equation, and exploring stencils for the Vanka patches. We derive analytical optimal smoothing factors for two types of additive Vanka patches used in [he2021local] for hybridized and embedded discontinuous Galerkin methods. Moreover, we also find the corresponding stencils for the Vanka operator, and show that they are closely related to the scaled mass matrix obtained from the finite element method. Based on this discovery, we propose the mass-based relaxation scheme, which yields rapid convergence. This mass-based relaxation is very simple: the computation cost is only matrix-vector product and there is no need to solve the subproblems needed in an additive Vanka setting. Another advantage of the mass matrices obtained from (bi)linear elements is sparsity.

The remainder of this paper is organized as follows. In Section 2 we introduce the two types of additive Vanka smoothers for the Poisson equation. In Section 3, we present our theoretical analysis of optimal smoothing factors in one and two dimensions. Based on our analysis we also propose a mass-based smoother for the three-dimensional problem, where the mass matrix is obtained from the trilinear finite element method. In Section 4, we numerically validate our analytical observations and present an LFA two-grid convergence factor. Finally, in Section 5 we discuss our findings and draw some conclusions.

We are interested in exploring the structure of an additive Vanka-type smoother for solving the linear system (4) using multigrid. In general, this type can be thought of as related to the family of block Jacobi smoothers, which are suitable for parallel computation and are typically highly efficient within the context of multigrid smoothing.

Let the degrees of freedom (DoFs) of

uh be the set Υ such that Υ=⋃Ni=1Υi. Vi is a restriction operator that maps the vector uh onto the vector in Υi. Define

Then, we update current approximation uj by a single Vanka relaxation given by: For i=1,⋯,N,

A single iteration of Vanka can be represented as

where the weighting matrix W=Wi is given by the natural weights of the overlapping block decomposition. Each diagonal entry is equal to the reciprocal of the number of patches that the corresponding degree of freedom appears in. We refer to M the Vanka operator.

For a single additive Vanka relaxation process, the relaxation error operator is given by

A key factor is the choice of the patch, that is, the {Υi}. Here, following [he2021local], we consider two patches, shown in Figure 1. We refer to the left patch in Figure 1 as an element-wise patch and the right one as a vertex-wise patch. We denote the corresponding relaxation error operators in (6) as Se and Sv, respectively. The collection of circles indicate the number of DoFs in one patch Υi. This means that the resulting subproblem is associated with a small matrix Ai whose size is 4×4 or 5×5. In the remainder of this work, for simplicity and clarity we use subscripts e and v to distinguish between the corresponding operators for element-wise Vanka and vertex-wise Vanka, respectively.

Local Fourier analysis (LFA) [MR1807961, wienands2004practical] is a useful tool for predicting and analyzing the convergence behavior of multigrid and other numerical algorithms. In this section, we employ LFA to examine the spectrum or spectral radius of the underlying operators to better understand the proposed Vanka-type smoother.

where d is the dimension of the underlying problem.

Let S be the relaxation error operator. Then, the corresponding LFA smoothing factor for S is given by

where ˜S(θ,ω) is the symbol of S, ω is algorithmic parameter, and ρ(˜S(θ,ω)) denotes the spectral radius of the matrix ˜S(θ,ω).

In this work, the symbol ˜S for the Laplacian considered is a scalar, so the spectral radius is reduced to the maximum of a scalar function. In the following, we use LFA to identify the optimal smoothing factor for the additive Vanka-type relaxation schemes and explore the structure of the Vanka operator M defined in (5). Before providing our detailed analysis of the smoothing factor for different relaxation schemes, we summarize our results in Table 1. The table provides a review of quantitative results of additive Vanka smoothers, and for comparison we include results for the standard point-wise damped Jacobi smoother.

In the analysis that follows, we will use ι to denote the imaginary scalar satisfying

3.1 Symbols of Vanka patches in 1D

In this subsection, we first consider the analytical symbol of the element-wise patch, then the vertex-wise patch for the Laplacian in 1D. We discuss the optimal smoothing factor for each case and derive the corresponding stencil for the Vanka operator.

It can easily be shown that the symbol of Ah, see (2), is given by

Moreover, for the element-wise patch the subproblem matrix is

Then, the symbol of Me is given by ˜Me=˜VT˜WΦTA−1iΦ˜V, where

Based on the above formulas, we obtain

This means that the element-wise Vanka operator is equivalent to a scaled mass matrix obtained from the linear finite element method, Me=hMfe.

Next, we give the optimal smoothing factor for the element-wise Vanka relaxation scheme.

To minimize μ(ω), we require

It is well known that the optimal smoothing factor for damped Jacobi relaxation for the Laplacian in 1D (with ω=23) is 13≈0.333≫0.059. This suggests that using the additive Vanka smoother for multigrid achieves much faster convergence.

We now consider the vertex-wise patch. The subproblem matrix is

Then, the symbol of Mv is given by ˜Mv=˜VT˜WΦTA−1iΦ˜V, where

Using the above formulas, we have

Compared with (11), the vertex-wise Vanka uses a wider stencil.

Again, the optimal smoothing factor for vertex-wise Vanka is significantly smaller (and hence better) than that of the damped Jacobi relaxation scheme.

3.2 Symbols of Vanka patches in 2D

Similarly to previous subsection, we first consider the analytical symbol for the element-wise patch, then for the vertex-wise patch for the Laplacian in 2D.

The symbol of Laplace operator discretized by five-point stencil, see (3), is

For the vertex-wise patch, following [farrell2021local], the relative Fourier matrix Φ is

Then, the symbol of Me is given by ˜Me=˜VT˜WΦTA−1iΦ˜V, where

Next, we give the optimal smoothing factor for the element-wise Vanka relaxation in 2D.

We have (η1,η2)∈[−1,−1]2=:Ω and g(η1,η2) is continuous in Ω. By the Extreme Value Theorem, g achieves its extremal values at the boundary of Ω or its derivatives are zeros. We first consider the derivatives,

Next, we compute the extremal values of g(η1,η2) at the boundary Ω. Due to the symmetric of g, we only need to consider the following two cases.

Based on the symbol of Me, we obtain the stencil of Me,

Now, we can make a connection between Me and Mfe:

Given the mass stencil Mfe in (22) and the relaxation scheme Sfe=I−ωMfeAh , the corresponding optimal smoothing factor is

where the minimum is uniquely achieved at ω=ωopt=34.

From Theorem 3.4, we see that the optimal smoothing factor of 0.333 for the mass-based relaxation is close to the optimal smoothing factor 0.280 for the element-wise Vanka patch, and it is better than 0.391 obtained from the vertex-wise Vanka, see (30), discussed in the next subsection. Thus, mass matrix could be used as a good approximation to the inverse of the Laplacian considered here.

Now, we analyse the smoothing factor for the vertex-wise patch. Following [farrell2021local], the relative Fourier matrix Φ is

stands for identity matrix with size

It can be shown that

Based on the symbol of Mv, we can write down the corresponding stencil of Mv as follows:

Now, we are able to give the optimal smoothing factor for the vertex-wise Vanka relaxation scheme.

While we do not include a smoothing analysis of Vanka-type solvers for the 3D case, we can still make a few interesting observations. In particular, motivated by our findings on the potential role of the mass matrix for relaxation, we further explore the scaled mass matrix in 3D as an approximation to the inverse of the Laplacian. Let

can be obtained by tensor product given by

The symbol of Ah in 3D is

Let MJ=6h2I, which is the Jacobi matrix.

If we consider the point-wise damped Jacobi as a preconditioner for the Laplacian, then the corresponding optimal smoothing factor of S=I−ωMJAh is

Next, we consider mass-based relaxation scheme for the Laplacian in 3D.

Given the scaled mass stencil M3 in (3.3) and mass-based relaxation scheme Sm=I−ωM3Ah in 3D, the corresponding optimal smoothing factor is