We derive the conjugate prior of the Dirichlet and beta distributions and explore it with numerical examples to gain an intuitive understanding of the distribution itself, its hyperparameters, and conditions concerning its convergence. Due to the prior's intractability, we proceed to define and analyze a closed-form approximation. Finally, we provide an algorithm implementing this approximation that enables fully tractable Bayesian conjugate treatment of Dirichlet and beta likelihoods without the need for Monte Carlo simulations. 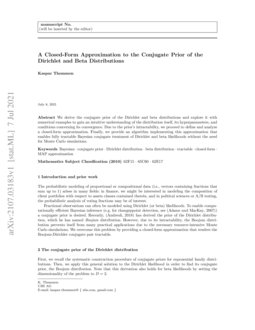 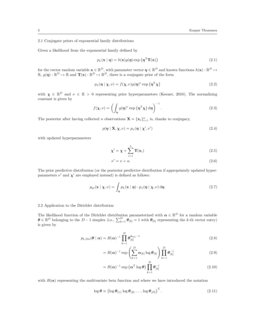 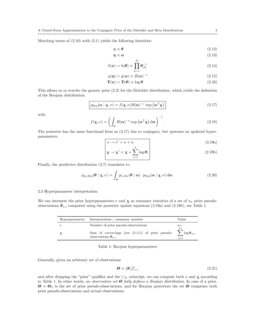 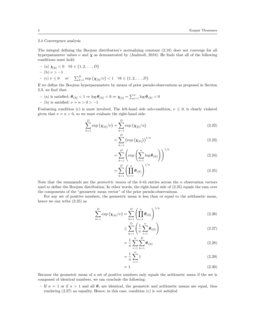 On a prior based on the Wasserstein information matrix

We introduce a prior for the parameters of univariate continuous distrib...
W. Li, et al. ∙

A Closed-Form EVSI Expression for a Multinomial Data-Generating Process

A New Distribution on the Simplex with Auto-Encoding Applications

The R2D2 Prior for Generalized Linear Mixed Models

In Bayesian analysis, the selection of a prior distribution is typically...
Eric Yanchenko, et al. ∙

Optimal Stopping of a Brownian Bridge with an Uncertain Pinning Time

We consider the problem of optimally stopping a Brownian bridge with an ...
Kristoffer Glover, et al. ∙

1 Introduction and prior work

The probabilistic modeling of proportional or compositional data (i.e., vectors containing fractions that sum up to 1) arises in many fields: in finance, we might be interested in modeling the composition of client portfolios with respect to assets classes contained therein, and in political sciences or A/B testing, the probabilistic analysis of voting fractions may be of interest.

(Adams und MacKay, 2007)) a conjugate prior is desired. Recently, (Andreoli, 2018) has derived the prior of the Dirichlet distribution, which he has named Boojum distribution. However, due to its intractability, the Boojum distribution prevents itself from many practical applications due to the necessary resource-intensive Monte Carlo simulations. We overcome this problem by providing a closed-form approximation that renders the Boojum-Dirichlet conjugate pair tractable.

2 The conjugate prior of the Dirichlet distribution

First, we recall the systematic construction procedure of conjugate priors for exponential family distributions. Then, we apply this general solution to the Dirichlet likelihood in order to find its conjugate prior, the Boojum distribution. Note that this derivation also holds for beta likelihoods by setting the dimensionality of the problem to D=2.

Given a likelihood from the exponential family defined by

for the vector random variable

x∈RD, with parameter vector η∈RD and known functions h(x):RD↦R, g(η):RD↦R and T(x):RD↦RD, there is a conjugate prior of the form

with χ∈RD and ν∈R>0 representing prior hyperparameters (Keener, 2010). The normalizing constant is given by

The posterior after having collected n observations X={xi}ni=1 is, thanks to conjugacy,

ν′ and χ′ are employed instead) is defined as follows:

2.2 Application to the Dirichlet distribution

The likelihood function of the Dirichlet distribution parameterized with α∈RD for a random variable θ∈RD belonging to the D−1 simplex (i.e., ∑Dk=1θ[k]=1 with θ[k] representing the k-th vector entry) is given by

This allows us to rewrite the generic prior (2.2) for the Dirichlet distribution, which yields the definition of the Boojum distribution:

The posterior has the same functional form as (2.17) due to conjugacy, but operates on updated hyperparameters:

Finally, the predictive distribution (2.7) translates to

We can interpret the prior hyperparameters ν and χ as summary statistics of a set of nπ prior pseudo-observations θπ,i computed using the posterior update equations (2.19a) and (2.19b), see Table 1.

Generally, given an arbitrary set of observations

The integral defining the Boojum distribution’s normalizing constant (2.18) does not converge for all hyperparameter values ν and χ as demonstrated by (Andreoli, 2018). He finds that all of the following conditions must hold:

If we define the Boojum hyperparameters by means of prior pseudo-observations as proposed in Section 2.3, we find that:

Evaluating condition (c) is more involved. The left-hand side sub-condition, ν≤0, is clearly violated given that ν=n>0, so we must evaluate the right-hand side:

Note that the summands are the geometric means of the k-th entries across the n observation vectors used to define the Boojum distribution. In other words, the right-hand side of (2.25

) equals the sum over the components of the “geometric mean vector” of the prior pseudo-observations.

For any set of positive numbers, the geometric mean is less than or equal to the arithmetic mean, hence we can write (2.25) as

Because the geometric mean of a set of positive numbers only equals the arithmetic mean if the set is composed of identical numbers, we can conclude the following:

The Boojum’s normalizing constant (2.18) cannot be computed analytically. This leads to the intractability of the distribution itself and derived distributions such as the predictive distribution (2.20). In order to avoid inefficient Monte Carlo simulations, we seek to find a closed-form approximation to the Boojum distribution. We propose the maximum a posteriori (MAP) method (Murphy, 2012)

which approximates the posterior probability distribution function (PDF) by a Dirac delta function located at its mode. After dropping the normalizing constant in (

which shows that αMAP is effectively a function of a single (vector) variable only, namely χ/ν. Setting the derivative with respect to α[k] of the argument in (2.34) to zero yields

where ψ is the digamma function111ψ(x)≡ddxlogΓ(x) where Γ(x) is the gamma function.. This set of D dependent equations lacks an analytic solution for α, so we must resort to numerical methods. To this end, either gradient ascent methods operating on the derivative (2.38) (e.g. the Adam optimizer (Kingma und Ba, 2017)

which is popular for its good performance in the neural network realm) or direct optimization methods (e.g. the

Once αMAP is determined, the MAP approximation of the Boojum posterior becomes, by definition,

where δ(⋅) is the Dirac delta function located at its argument. Consequently, the posterior predictive distribution (2.20) simplifies to the likelihood evaluated at the mode αMAP, thus rendering it tractable (a welcome side-effect of the MAP approximation):

This approximation will allow us to perform Bayesian inference of a Dirichlet or beta likelihood in closed-form (except for the optimization step in (2.34) that has to be carried out numerically). The next section will analyze the accuracy of the proposed MAP approximation.

3 Analysis of the Boojum and the MAP approximation

Figure 1 shows five Boojum distributions Boj1 through Boj5 configured with different sets of observations Θ that define the hyperparameters ν and χ as per (2.21). We can make the following observations:

The numerical case studies analyzed in the previous section lead to the following conclusions for the construction of Boojum distributions using pseudo-observations:

We present an algorithm that performs closed-form333With the exception of the numerical computation of αMAP on line 7., approximate Bayesian inference of Dirichlet and beta likelihoods using the MAP approximation of the Boojum prior.

We supply a reference implementation of the above algorithm in the GitHub repository (Thommen, 2021).

We have derived a closed-form approximation to the Boojum distribution (i.e, to the the conjugate prior of the Dirichlet and beta likelihoods), including an exploratory analysis of the distribution and an algorithm to implement the procedure.

Further research should be directed at improving the MAP approximation, e.g. through variational inference, in an attempt to find more accurate posterior approximations that render it (and, ideally, the posterior predictive distribution) tractable.

I want to thank my line manager Giuseppe Nuti for having given me the opportunity to work on this problem and for feedback on drafts of this paper. I also want to thank my colleagues Peter Larkin, Lluís Jiménez-Rugama and Mathias Brucherseifer for valuable feedback.