In this paper, we investigate the power functions F(x)=x^d over the finite field 𝔽_2^4n, where n is a positive integer and d=2^3n+2^2n+2^n-1. It is proved that F(x)=x^d is APcN at certain c's in 𝔽_2^4n, and it is the second class of APcN power functions over finite fields of even characteristic. Further, the c-differential spectrum of these power functions is also determined. 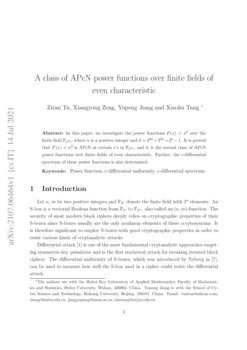 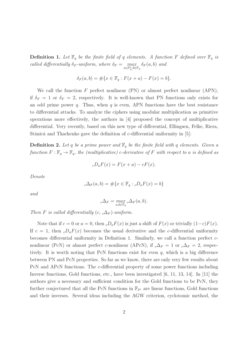 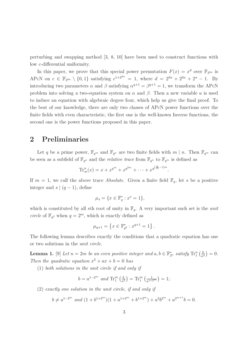 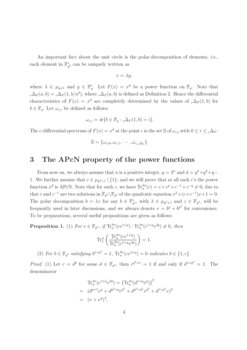 Let n, m be two positive integers and F2n denote the finite field with 2n elements. An S-box is a vectorial Boolean function from F2n to F2m, also called an (n,m)-function. The security of most modern block ciphers deeply relies on cryptographic properties of their S-boxes since S-boxes usually are the only nonlinear elements of these cryptosystems. It is therefore significant to employ S-boxes with good cryptographic properties in order to resist various kinds of cryptanalytic attacks.

Differential attack [1] is one of the most fundamental cryptanalytic approaches targeting symmetric-key primitives and is the first statistical attack for breaking iterated block ciphers. The differential uniformity of S-boxes, which was introduced by Nyberg in [7], can be used to measure how well the S-box used in a cipher could resist the differential attack.

Let Fq be the finite field of q elements. A function F defined over Fq is called differentially δF-uniform, where δF=maxa∈F∗q,b∈FqδF(a,b) and

, respectively. It is well-known that PN functions only exists for an odd prime power

q. Thus, when q is even, APN functions have the best resistance to differential attacks. To analyze the ciphers using modular multiplication as primitive operations more effectively, the authors in [4] proposed the concept of multiplicative differential. Very recently, based on this new type of differential, Ellingsen, Felke, Riera, Stǎnicǎ and Tkachenko gave the definition of c-differential uniformity in [5]:

Let q be a prime power and Fq be the finite field with q elements. Given a function F:Fq→Fq, the (multiplicative) c-derivative of F with respect to a is defined as

Then F is called differentially (c,cΔF)-uniform.

Note that if c=0 or a=0, then cDaF(x) is just a shift of F(x) or trivially (1−c)F(x). If c=1, then cDaF(x) becomes the usual derivative and the c-differential uniformity becomes differential uniformity in Definition 1. Similarly, we call a function perfect c-nonlinear (PcN) or almost perfect c-nonlinear (APcN), if cΔF=1 or cΔF=2, respectively. It is worth noting that PcN functions exist for even q, which is a big difference between PN and PcN properties. So far as we know, there are only very few results about PcN and APcN functions. The c-differential property of some power functions including Inverse functions, Gold functions, etc., have been investigated [6, 11, 13, 14]. In [11] the authors give a necessary and sufficient condition for the Gold functions to be PcN, they further conjectured that all the PcN functions in F2n are linear functions, Gold functions and their inverses. Several ideas including the AGW criterion, cyclotomic method, the perturbing and swapping method [3, 8, 10] have been used to construct functions with low c-differential uniformity.

In this paper, we prove that this special power permutation F(x)=xd over F24n is APcN on c∈F24n∖{0,1} satisfying c1+22n=1, where d=23n+22n+2n−1. By introducing two parameters α and β satisfying αq+1=βq+1=1, we transform the APcN problem into solving a two-equation system on α and β. Then a new variable u is used to induce an equation with algebraic degree four, which help us give the final proof. To the best of our knowledge, there are only two classes of APcN power functions over the finite fields with even characteristic, the first one is the well-known Inverse functions, the second one is the power functions proposed in this paper.

Let q be a prime power, Fqm and Fqn are two finite fields with m∣n. Then Fqm can be seen as a subfield of Fqn and the relative trace from Fqn to Fqm is defined as

If m=1, we call the above trace Absolute. Given a finite field Fq, let s be a positive integer and s∣(q−1), define

which is constituted by all sth root of unity in Fq. A very important such set is the unit circle of Fq2 when q=2m, which is exactly defined as

The following lemma describes exactly the conditions that a quadratic equation has one or two solutions in the unit circle.

(1) both solutions in the unit circle if and only if

(2) exactly one solution in the unit circle, if and only if

An important fact about the unit circle is the polar-decomposition of elements, i.e., each element in F∗q2 can be uniquely written as

3 The APcN property of the power functions

From now on, we always assume that n is a positive integer, q=2n and d=q3+q2+q−1. We further assume that c∈μq2+1∖{1}, and we will prove that at all such c’s the power function xd is APcN. Note that for such c, we have Tr4nn(c)=c+cq+c−1+c−q≠0, due to that c and c−1 are two solutions in Fq4∖Fq2 of the quadratic equation x2+(c+c−1)x+1=0. The polar decomposition b=λz for any b∈F∗q4, with λ∈μq2+1 and z∈Fq2, will be frequently used in later discussions, and we always denote v=bq+bq2 for convenience. To be preparations, several useful propositions are given as follows:

in which the middle part equals

The proof is proceeded as follows:

by expanding the above equality we have

Since all the coefficients belong to Fq and k∉Fq, we have that C0(k)=0 if and only if

By squaring the second equality and plugging into which with (3.5), we obtain that