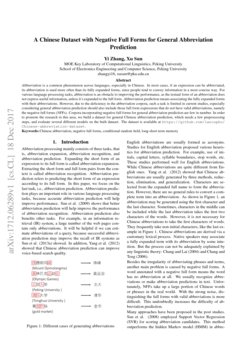 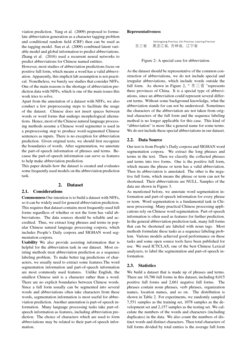 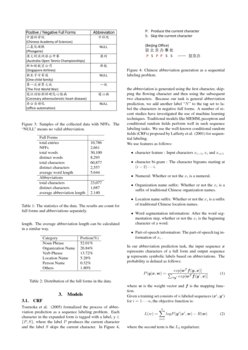 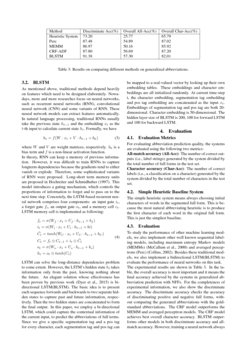 Poetry is one of the most important art forms of human languages. Recent...
Wenhao Li, et al. ∙

In this paper, we give an overview for the shared task at the CCF Confer...
Xipeng Qiu, et al. ∙

Blow the Dog Whistle: A Chinese Dataset for Cant Understanding with Common Sense and World Knowledge

QuoteR: A Benchmark of Quote Recommendation for Writing

It is very common to use quotations (quotes) to make our writings more e...
Fanchao Qi, et al. ∙

Cloze-style reading comprehension in Chinese is still limited due to the...
Chujie Zheng, et al. ∙

We report on an exploratory analysis of the forms of plagiarism observab...
Moritz Schubotz, et al. ∙

Apart from the annotation of a dataset with NFFs, we also conduct a few preprocessing steps to facilitate the usage of the dataset. Chinese does not insert spaces between words or word forms that undergo morphological alternations. Hence, most of the Chinese natural language processing methods assume a Chinese word segmenter is used in a preprocessing step to produce word-segmented Chinese sentences as inputs. There is no exception for abbreviation prediction. Given original texts, we should first recognize the boundaries of words. After segmentation, we annotate the part-of-speech information of phrases and terms. Because the part-of-speech information can serve as features to help make abbreviation prediction.

This paper details how the dataset is created and evaluates some frequently used models on the abbreviation prediction task.

Commonness Our intention is to build a dataset with NFFs, so it can be widely used for general abbreviation prediction. This requires that dataset contains most frequently-used full forms regardless of whether or not the form has valid abbreviations. The data sources should be reliable and accredited. Thus, we extract long phrases and terms in popular Chinese natural language processing corpora, which includes People’s Daily corpora and SIGHAN word segmentation corpora.

We build a dataset that is made up of phrases and terms. There are 10,786 full forms in this dataset, including 8,015 positive full forms and 2,661 negative full forms. The phrases contain noun phrases, verb phrases, organization names, location names, and so on. The distribution is shown in Table 2. For experiments, we randomly sampled 7,551 samples as the training set, 1078 samples as the development set and 2,157 samples as the testing set. We calculate the numbers of the words and characters (including duplicates) in the data. We also count the numbers of distinct words and distinct characters. Then total characters of full forms divided by total entries is the average full form length. The average abbreviation length can be calculated in a similar way.

We use features as follows:

In our abbreviation prediction task, the input sequence x represents characters of a full form and output sequence y

represents symbolic labels based on abbreviations. The probability is defined as follows:

where w is the weight vector and f is the mapping function.

Given a training set consists of n labeled sequences (xi, yi) for i=1⋯n, the objective function is:

where the second term is the L2 regularizer.

As mentioned above, traditional methods depend heavily on features which need to be designed elaborately. Nowadays, more and more researches focus on neural networks, such as recurrent neural networks (RNN), convolutional neural network (CNN) and some variants of RNN. These neural network models can extract features automatically. In natural language processing, traditional RNNs usually take the previous state

ht−1 and the embedding xt as the t-th input to calculate current state ht. Formally, we have

where W and V are weight matrices, respectively. bh is a bias term and f

is a non-linear activation function.

In theory, RNN can keep a memory of previous information. However, it was difficult to train RNNs to capture longterm dependencies because the gradients tend to either vanish or explode. Therefore, some sophisticated variants of RNN were proposed. Long-short term memory units are proposed in hochreiter1997long. This model introduces a gating mechanism, which controls the proportions of information to forget and to pass on to the next time step. Concretely, the LSTM-based recurrent neural network comprises four components: an input gate it, a forget gate ft, an output gate ot, and a memory cell ct. LSTM memory cell is implemented as following:

LSTM can solve the long-distance dependencies problem to some extent. However, the LSTM’s hidden state ht takes information only from the past, knowing nothing about the future. An elegant solution whose effectiveness has been proven by previous work [Dyer et al.2015] is bi-directional LSTM(BLSTM). The basic idea is to present each sequence forwards and backwards to two separate hidden states to capture past and future information, respectively. Then the two hidden states are concatenated to form the final output. In this paper, we employ a bi-directional LSTM, which could capture the contextual information of the current input, to predict the abbreviations of full terms. Since we give a specific segmentation tag and a pos tag for every character, each segmentation tag and pos tag can be mapped to a real-valued vector by looking up their own embedding tables. These embeddings and character embeddings are all initialized randomly. At current time-step t, the character embedding, segmentation tag embedding and pos tag embedding are concatenated as the input xt. Embeddings of segmentation tag and pos tag are both 20-dimensional. Character embedding is 50-dimensional. The hidden layer size of BLSTM is 200, 100 for forward LSTM and 100 for backward LSTM.

All-match accuracy (All-Acc): The number of correct outputs (i.e., label strings) generated by the system divided by the total number of full forms in the test set.

Character accuracy (Char-Acc): The number of correct labels (i.e., a classification on a character) generated by the system divided by the total number of characters in the test set.

[Collins2002]. Besides these traditional models, we also implement a bidirectional LSTM(BLSTM) to evaluate the performance of neural networks on this task.

The experimental results are shown in Table 3. In the table, the overall accuracy is most important and it means the final accuracy achieved by the systems in generalized abbreviation prediction with NFFs. For the completeness of experimental information, we also show the discriminate accuracy. The discriminate accuracy checks the accuracy of discriminating positive and negative full forms, without comparing the generated abbreviations with the gold-standard abbreviations. The CRF model outperforms the MEMM and averaged perceptron models. The CRF model achieves best overall character accuracy. BLSTM outperforms other models in both discriminate accuracy and all-match accuracy. However, training a neural network always needs a large amount of data. With a dataset that is not so large, the ability of a neural network may be limited.

This work was supported in part by National Natural Science Foundation of China (No. 61673028), National High Technology Research and Development Program of China (863 Program, No. 2015AA015404), and an Okawa Research Grant (2016). Email correspondence to Xu Sun.