In this paper, we present a Chebyshev based spectral method for the computation of the Jost solutions corresponding to complex values of the spectral parameter in the Zakharov–Shabat scattering problem. The discrete framework is then used to devise a new algorithm based on a minimum total variation (MTV) principle for the computation of the norming constants which comprise the discrete part of the nonlinear Fourier spectrum. The method relies on the MTV principle to find the points where the expressions for norming constants are numerically well-conditioned. 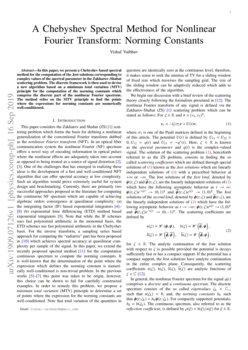 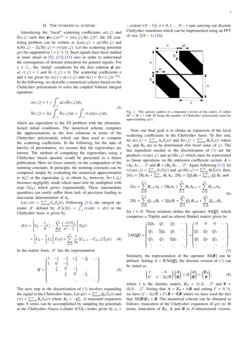 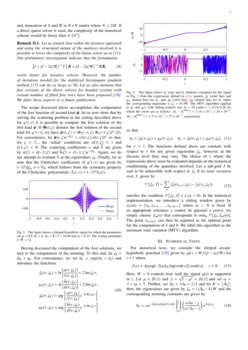 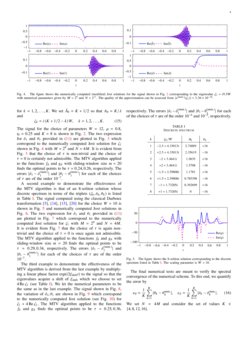 In this letter, we present a fast and well-conditioned spectral method b...
Vishal Vaibhav, et al. ∙

Statistics of the Nonlinear Discrete Spectrum of a Noisy Pulse

In the presence of additive Gaussian noise, the statistics of the nonlin...
Francisco Javier Garcia-Gomez, et al. ∙

Data are represented as graphs in a wide range of applications, such as ...
Giuseppe Patanè, et al. ∙

This paper considers the Zakharov and Shabat (ZS) [1] scattering problem which forms the basis for defining a nonlinear generalization of the conventional Fourier transform dubbed as the nonlinear Fourier transform (NFT). In an optical fiber communication system the nonlinear Fourier (NF) spectrum offers a novel way of encoding information in optical pulses where the nonlinear effects are adequately taken into account as opposed to being treated as a source of signal distortion [2, 3]. One of the challenges that has emerged in realizing these ideas is the development of a fast and well-conditioned NFT algorithm that can offer spectral accuracy at low complexity. Such an algorithm would prove extremely useful for system design and benchmarking. Currently, there are primarily two successful approaches proposed in the literature for computing the continuous NF spectrum which are capable of achieving algebraic orders convergence at quasilinear complexity: (a) the integrating factor (IF) based exponential integrators [4, 5, 6, 7, 8] (b) exponential time differencing (ETD) method based exponential integrators [9]. Note that while the IF schemes uses fast polynomial arithmetic in the monomial basis, the ETD schemes use fast polynomial arithmetic in the Chebyshev basis. For the inverse transform, a sampling series based approach for computing the “radiative” part has been proposed in [10] which achieves spectral accuracy at quasilinear complexity per sample of the signal. In this paper, we extend the recently proposed spectral method [11] for the computation continuous spectrum to compute the norming constants. It is well-known that the determination of the point where the expression which defines the norming constant is numerically well-conditioned is non-trivial problem. In the previous works [5, 6, 7] this point was taken to be origin, however, this choice can be shown to fail for carefully constructed examples. In order to remedy this problem, we propose a minimum total variation (MTV) principle to determine a set of points where the expression for the norming constants are well-conditioned. Note that total variation of the quantities in question are identically zero at the continuous level; therefore, it makes sense to seek the minima of TV for a sliding window of fixed size which traverses the sampling grid. The size of the sliding window can be adaptively reduced which adds to the effectiveness of the algorithm.

We begin our discussion with a brief review of the scattering theory closely following the formalism presented in [12]. The nonlinear Fourier transform of any signal is defined via the Zakharov-Shabat (ZS) [1] scattering problem which can be stated as follows: For ζ∈R and v=(v1,v2)⊺,

In general, the nonlinear Fourier spectrum for the signal q(t) comprises a discrete and a continuous spectrum. The discrete spectrum consists of the so called eigenvalues ζk∈C+, such that a(ζk)=0, and, the norming constants bk such that ϕ(t;ζk)=bkψ(t;ζk). For compactly supported potentials, bk=b(ζk). The continuous spectrum, also referred to as the reflection coefficient, is defined by ρ(ξ)=b(ξ)/a(ξ) for ξ∈R.

which are equivalent to the ZS problem with the aforementioned initial conditions. The numerical scheme computes the approximations to the Jost solutions in terms of the Chebyshev polynomials which can then used to compute the scattering coefficients. In the following, for the sake of brevity of presentation, we assume that the eigenvalues are known. The method of computing the eigenvalues using a Chebyshev based spectral would be presented in a future publication. Here we focus entirely on the computation of the norming constants. In principle, the norming constants can be computed simply by evaluating the numerical approximation to b(ζ) at the eigenvalue ζk to obtain bk, however, ˘b(+1;ζk) becomes negligibly small which must now be multiplied with exp(−2iζk) which grows exponentially. These intermediate quantities can easily suffer from lack of precision leading to inaccurate determination of bk.

In the matrix form, K has the representation

The next step in the discretization of (3) involves expanding the signal in the Chebyshev basis. Let q(t)=∑∞n=0QnTn(t) and r(t)=∑∞n=0RnTn(t) where Rn=−Q∗n. A truncated expansion upto N terms can be accomplished by sampling the potentials at the Chebyshev–Gauss–Lobatto (CGL) nodes given by tn=−cos[nπ/(N−1)],n=0,1,…N−1 and carrying out discrete Chebyshev transform which can be implemented using an FFT of size 2(N−1) [16].

Now, our final goal is to obtain an expansion of the local scattering coefficients in the Chebyshev basis: To this end, let a(t;ζ)=∑∞n=0AnTn(t) and ˘b(t;ζ)=∑∞n=0BnTn(t) where An and Bn are to be determined (for fixed value of ζ). The last ingredient needed in the discretization of (3) are the products r(t)a(t;ζ) and q(t)˘b(t;ζ)

for l∈N. These relations define the operator M[Q], which comprises a Töplitz and an almost Hankel matrix given by

Similarly, the representation of the operator M[R] can be defined. Setting Λ=KM[Q], the discrete version of (3) can be stated as

E0=(1,0,…)⊺ and 0=(0,0,…)⊺. Noting that A=E0+ΛB and setting Γ=Λ∗Λ, we have (I−2iζK+Γ)B=KR where we have used the fact that M[R]E0=R. The numerical scheme can be obtained as follows: truncation of the Chebyshev expansion of q(t) to M terms, truncation of E0, A and B to N-dimensional vectors, and, truncation of Λ and K to N×N matrix where N≥2M. If a direct sparse solver is used, the complexity of the numerical scheme would be lower than O(N3).

Let us remark that within the iterative approach and using the structured nature of the matrices involved it is possible to lower the complexity of the linear solver as in [11]. Our preliminary investigation indicate that the formulation

works better for iterative solvers. However, the number of iterations needed for the stabilized biconjugate gradient method [17] can be as large as 50. Let us also mention that fast versions of the direct solvers for banded systems with certain number of filled first rows have been proposed [18]. We defer these aspects to a future publication.

for τ∈I. The functions defined above are constant with respect to τ for any given eigenvalue ζk, however, at the discrete level they may vary. The choice of τ where the expressions above must be evaluated depends on the numerical conditioning of the quantities involved. Let a sub-grid J be said to be admissible with respect to fδ if its total variation over J, given by

satisfies the condition V[fδ;J]≤ϵ,(ϵ>0). In the numerical implementation, we introduce a sliding window given by Jn(m)={τn,τn+1,…,τn+m−1} where m<N is fixed. If an appropriate tolerance ϵ cannot be guessed a priori, we simply choose Jm(n) that corresponds to minnV[fδ;Jm(n)]. The point τn+m/2 can then be reported as the optimal point for the computation of δ and θ. We label this algorithm as the minimum total variation (MTV) algorithm.

For numerical tests, we consider the chirped secant-hyperbolic potential [19] given by q(t)=Wf((t−t0)/W) for t∈I where

A second example to demonstrate the effectiveness of the MTV algorithm is that of an 8-soliton solution whose discrete spectrum in terms of the triplets (ζk,δk,θk) is listed in Table I. The signal computed using the classical Darboux transformation [20, 5, 14, 15] for the choice W=10 is shown in Fig. 5 and numerically computed Jost solutions in Fig. 6. The two expression for δ1 and θ1 provided in (11) are plotted in Fig. 7 which correspond to the numerically computed Jost solution for ζ1 with M=29 and N=4M. It is evident from Fig. 7 that the choice of τ is again non-trivial and the choice of τ=0 is once again not admissible. The MTV algorithm applied to the functions fδ and gδ with sliding-window size m=20 finds the optimal points to be τ≈0.29,0.34, respectively. The errors |δ1−δ(num.)1| and |θ1−θ(num.)1| for each of the choices of τ are of the order 10−7.

The third example to demonstrate the effectiveness of the MTV algorithm is derived from the last example by multiplying a linear phase factor exp(i2ξshiftt) to the signal so that the eigenvalues acquire a shift of ξshift which we choose to set 4Reζ1 (see Table I). We let the numerical parameters to be the same as in the last example. The signal shown in Fig. 8, the variation of δ1,θ1 are shown in Fig. 9 which correspond to the numerically computed Jost solution (see Fig. 10) for ζ1+4Reζ1. The MTV algorithm applied to the functions fδ and gδ finds the optimal points to be τ≈0.25,0.36, respectively. The errors |δ1−δ(num.)1| and |θ1−θ(num.)1| for each of the choices of τ are of the order 10−4 and 10−5, respectively.

The final numerical tests are meant to verify the spectral convergence of the numerical scheme. To this end, we quantify the error by

The first profile we would like to use for the convergence analysis is chirped hyperbolic profile. Let us set the parameters as μ=0.8, t0=0 and W=20. The choice of these parameters makes τ=0 optimal for the computation of the norming constants. The results of the convergence analysis is shown in Fig. 11 which confirms the spectral convergence of the numerical scheme. The plateauing of the error seen in these plots are on account of the lack of compact support of q(t).

The second profile we would like to use for the convergence analysis are multisoliton solutions. Let θj=π(j+2)/9∈[π/3,2π/3] for j=1,…,4. Then the eigenvalues are defined as ζj+4(l−1)=lexp(iθj),l=1,…,4,j=1,…,4. The norming constants are chosen as bj=exp[iπ(j−1)/16],j=1,2,…,16. The discrete spectrum corresponding to K=16 is depicted in Fig. 12. The potential can be computed with machine precision using the classical Darboux transformation algorithm [5]. The scaling parameter is set to be W=22. Here, τ=0 is known to be optimal for the computation of the norming constants. The results of the convergence analysis is shown in Fig. 13 which confirms the spectral convergence of the numerical scheme. The plateauing of the error seen in these plots are again on account of the lack of compact support of q(t).

In this paper, we presented a Chebyshev spectral method for the solution of the Zakharov–Shabat scattering problem for complex values of the spectral parameter. Within this discrete framework, we also proposed a robust algorithm for computing the norming constants. This algorithm is based on a minimum total variation principle and therefore the algorithm is abbreviated as the MTV algorithm for norming constants. Future work in this direction will focus on developing fast solvers for the linear system within the direct (relying on the structured nature of the system matrix) as well as iterative (relying on the fast matrix–vector multiplication for structured matrices) methods with and without preconditioning.