A characterization of proportionally representative committees

A well-known axiom for proportional representation is Proportionality of Solid Coalitions (PSC). We characterize committees satisfying PSC as possible outcomes of the Minimal Demand rule, which generalizes an approach pioneered by Michael Dummett. 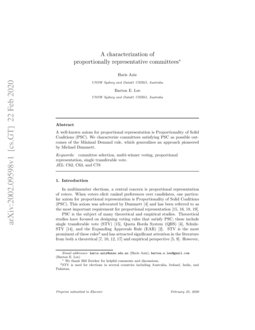 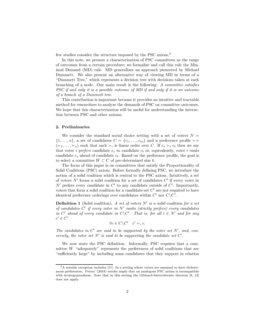 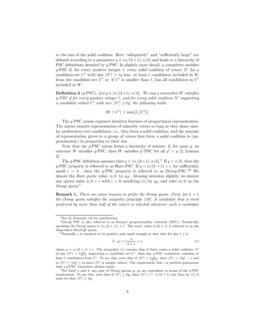 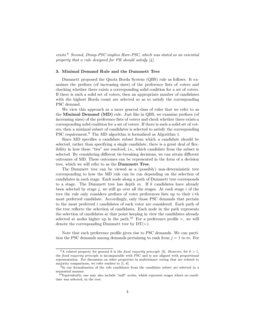 On proportionality in multi-issue problems with crossed claims

In this paper, we analyze the problem of how to adapt the concept of pro...
Rick K. Acosta-Vega, et al. ∙

We consider elections where the voters come one at a time, in a streamin...
Palash Dey, et al. ∙

Participatory budgeting is one of the exciting developments in deliberat...
Haris Aziz, et al. ∙

Combatting Gerrymandering with Social Choice: the Design of Multi-member Districts

Every representative democracy must specify a mechanism under which vote...
Nikhil Garg, et al. ∙

On Hermitian varieties in PG(6,q^2)

PSC is the subject of many theoretical and empirical studies. Theoretical studies have focused on designing voting rules that satisfy PSC; these include single transferable vote (STV) (Tideman, 1995), Quota Borda System (QBS) (Dummett, 1984), Schulz-STV (Schulze, 2011), and the Expanding Approvals Rule (EAR) (Aziz and Lee, 2020). STV is the most prominent of these rules222STV is used for elections in several countries including Australia, Ireland, India, and Pakistan. and has attracted significant attention in the literature from both a theoretical (Geller, 2005; Miller, 2007; Ray, 1986; Van Deemen, 1993) and empirical perspective (Gallagher, 1986; Latner and McGann, 2005). However, few studies consider the structure imposed by the PSC axiom.333A notable exception includes Peters (2018). In a setting where voters are assumed to have dichotomous preferences,  Peters’ (2018) results imply that an analogous PSC axiom is incompatible with strategyproofness. Note that in this setting the Gibbard-Satterthwaite theorem (Gibbard, 1977; Satterthwaite, 1975) does not apply.

In this note, we present a characterization of PSC committees as the range of outcomes from a certain procedure; we formalize and call this rule the Minimal Demand (MD) rule. MD generalizes an approach pioneered by Michael Dummett. We also present an alternative way of viewing MD in terms of a “Dummett Tree,” which represents a decision tree with decisions taken at each branching of a node. Our main result is the following:

This contribution is important because it provides an intuitive and tractable method for researchers to analyze the demands of PSC on committee outcomes. We hope that this characterization will be useful for understanding the interaction between PSC and other axioms.

A set of voters N′ is a solid coalition for a set of candidates C′ if every voter in N′ ranks (strictly prefers) every candidates in C′ ahead of every candidate in C∖C′. That is, for all i∈N′ and for any c′∈C′

We now state the PSC definition. Informally, PSC requires that a committee W “adequately” represents the preferences of solid coalitions that are “sufficiently large” by including some candidates that they support in relation to the size of the solid coalition. Here “adequately” and “sufficiently large” are defined according to a parameter q∈(n/(k+1),n/k] and leads to a hierarchy of PSC definitions denoted by q-PSC. In slightly more detail, a committee satisfies q-PSC if, for every positive integer ℓ, every solid coalition of voters N′ for a candidate-set C′ with size |N′|≥ℓq has: at least ℓ candidates included in W from the candidate-set C′ or, if C′ is smaller than ℓ, has all candidates in C′ included in W.

Let q∈(n/(k+1),n/k]. We say a committee W satisfies q-PSC if for every positive integer ℓ, and for every solid coalition N′ supporting a candidate subset C′ with size |N′|≥ℓq, the following holds

There are some reasons to prefer the Droop quota. First, for k=1 the Droop quota satisfies the majority principle (Woodall, 1997): A candidate that is most preferred by more than half of the voters is selected whenever such a candidate exists.888A related property for general k is the fixed majority principle (Debord, 1993). However, for k>1, the fixed majority principle is incomparable with PSC and is not aligned with proportional representation. For discussion on other properties in multiwinner voting that are related to majority comparisons, we refer readers to Aziz et al. (2017); Gehrlein (1985). Second, Droop-PSC implies Hare-PSC, which was stated as an essential property that a rule designed for PR should satisfy (Dummett, 1984).

Dummett proposed the Quota Borda System (QBS) rule as follows. It examines the prefixes (of increasing sizes) of the preference lists of voters and checking whether there exists a corresponding solid coalition for a set of voters. If there is such a solid set of voters, then an appropriate number of candidates with the highest Borda count are selected so as to satisfy the corresponding PSC demand.

We view this approach as a more general class of rules that we refer to as the Minimal Demand (MD) rule. Just like in QBS, we examine prefixes (of increasing sizes) of the preference lists of voters and check whether there exists a corresponding solid coalition for a set of voters. If there is such a solid set of voters, then a minimal subset of candidates is selected to satisfy the corresponding PSC requirement.999In our formalization of the rule candidates from the candidate subset are selected in a sequential manner. The MD algorithm is formalized as Algorithm 1.

Since MD specifies a candidate subset from which a candidate should be selected, rather than specifying a single candidate, there is a great deal of flexibility in how these “ties” are resolved, i.e., which candidate from the subset is selected. By considering different tie-breaking decisions, we can attain different outcomes of MD. These outcomes can be represented in the form of a decision tree, which we will refer to as the Dummett Tree.

Note that each preference profile gives rise to PSC demands. We can partition the PSC demands among demands pertaining to rank from j=1 to m. For any given j, we only consider candidates in C(j): the set of candidates involved in preferences of voters up to their first j positions.

A reformulation of the MD rule

Consider the following voting rule, which we call w-MD.

and there exists a positive integer ℓ such that

then select an unelected candidate c′ from C′ and update W′ to W′∪{c′}, and rescale the weight of all voters in N′ to wi×T−qT. Repeat until no such set of candidates C′ exists, or all candidates in any such set have already been elected. If j<m, update j to j+1; otherwise terminate the algorithm.

Fix the preferences of voters, and let W={c1,…,ck} be some outcome from MD such that candidate cs is elected before candidate ct for all 1≤s<t≤k.

Now suppose that there is no outcome of w-MD that coincides with W. Let W′={c′1,…,c′k} be an outcome of w-MD, and denote by p the first index such that cp≠c′p and cs=c′s for all s<p. Note that p is the index of the ‘point-of-first-difference’ between the election outcomes W and W′. Furthermore, suppose that among all w-MD outcomes W′ maximizes this ‘point-of-first-differences’ index p.

Suppose that cp is elected in MD at the j-th stage (i.e., when considering the set of C(j) candidates). Consider the stage where the C(j) candidates are considered under w-MD. Since cp is required for PSC (due to minimal demand election procedure of MD), it must be that cp is an element of a candidate C′ which is solidly supported by a group of voters |N′|≥ℓq for some ℓ, and

Now consider the w-MD voting rule, the group of voters N′ clearly satisfies the second condition (3). Thus, it only remains to prove that (2) also holds. The original total weight of voters in N′ was T0≥ℓq (since we intialize wi=1). Given that (4) holds, and the group of voters only solidly support candidates in C′, it must be that the remaining weight is at least T0−(ℓ−1)q≥q. We conclude that (2) holds. Thus, cp is a valid choice for w-MD and at least one of the outcomes of w-MD must include {c1,…,cp} which has ‘point-of-first-difference’ index of at least p+1. This contradicts the maximality of W′; we conclude that W is attainable under w-MD.

Suppose that there is no outcome of MD that coincides with W′. Let W={c1,…,ck} be an outcome of MD, and again denote by p the index such that cp≠c′p and cs=c′s for all s<p. Furthermore, suppose that among all MD outcomes W maximizes this ‘point-of-first-differences’ index p.

Suppose that cp is elected in w-MD at the j-th stage (i.e., when considering the set of C(j) candidates). Consider the stage where the C(j) candidates are considered under MD. Since cp was elected under w-MD it must be the case that there exists a group of voters N′ who solidly supporting a candidate subset C′ with cp∈C′ such that the weight of N′ is T≥q. That is, both (2) and (3) hold. But the MD voting rule only requires (3) to hold to make cp a valid choice. This leads to a new outcome which has a strictly larger ‘point-of-first-difference’ index of p+1. This is a contradiction and so it must be that W′ is attainable under MD. ∎

We present some connections between MD, Dummett Trees and PSC. Lemma 2 states that each possible outcome of MD satisfies PSC. To the best of our knowledge, it is the first formal argument that MD returns a PSC committee and the outcome being PSC does not depend on the specific choices made during the algorithm.

Each path along the Dummett Tree gives rise to a selection of a committee satisfying PSC. Equivalently, each possible outcome of MD satisfies PSC.

Equivalently, we consider the w-MD formulation of MD (recall Lemma 1).

We denote by C(j) the set of candidate involved in the j-preferential election, and fix q∈(nk+1,nk].

Let W be an arbitrary outcome from the w-MD voting rule. For sake of a contradiction suppose that W does not satisfy PSC; that is, there exists a positive integer ℓ and a group of voters N′ with |N′|≥ℓq solidly supporting a candidate subset C′ such that

Assume that ℓ and C′ are minimal such that

This can always be achieved by considering smaller subsets of N′ and smaller values ℓ′<ℓ.

Now consider j-preferential election for j=|C′|. Note that C′⊆C(j), hence voters in N′ only vote for candidates in C′ in this election, and also all previous j′-preferential elections for j′<j, Now, let Wj⊆W denote the subset of elected candidates at the termination of this j-preferential election. Since |W∩C′|=ℓ−1<ℓ, it follows that |Wj∩C′|≤ℓ−1 and so condition (3) in the w-MD rule is satisfied. Furthermore, it must be the case that the total weight of voters in N′ exceeds q; that is, condition (2) is also satisfied. This follows since the group N′ starts with weight T0=|N′|≥ℓq and the election of each candidate (<ℓ such candidates) reduces this weight by at most q (strictly less when there is overlap of coalitions), and so

Lemma 3 provides a converse to Lemma 2: every PSC committee is a possible outcome of MD.

Take any committee W satisfying PSC. Then the candidates in W are selected along some path of the Dummett tree.

Consider a committee W satisfying PSC. We simulate MD that makes makes decisions along the tree and selects candidates from W. The proof is by induction on the number of stages. At each stage, we can select candidates only from W to fulfill the PSC demands for the first j positions. Since W satisfies PSC and hence all PSC demands, if we have selected Wj⊂W by the j-th stage, there exists a set Wj+1 such that Wj⊆Wj+1⊆W that satisfies the PSC demands up to the first j+1 positions. Hence there always exists a path in the Dummett tree that selects W. ∎

Combining the two lemmas gives us the following equivalence theorem.

The following four statements are equivalent.