A Call for Clarity in Reporting BLEU Scores

The field of machine translation is blessed with new challenges resulting from the regular production of fresh test sets in diverse settings. But it is also cursed---with a lack of consensus in how to report scores from its dominant metric. Although people refer to "the" BLEU score, BLEU scores can vary wildly with changes to its parameterization and, especially, reference processing schemes, yet these details are absent from papers or hard to determine. We quantify this variation, finding differences as high as 1.8 between commonly used configurations. Pointing to the success of the parsing community, we suggest machine translation researchers set- tle upon the BLEU scheme used by the annual Conference on Machine Translation (WMT), which does not permit user-supplied preprocessing of the reference. We provide a new tool to facilitate this. 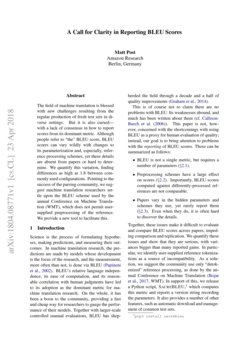 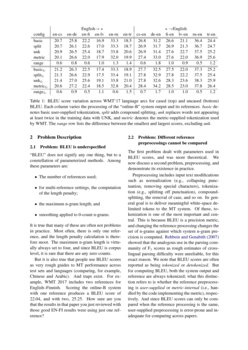 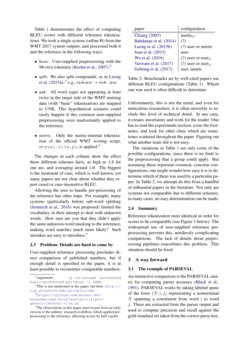 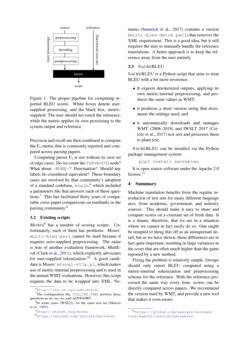 Scientific Credibility of Machine Translation Research: A Meta-Evaluation of 769 Papers

Telemedicine as a special case of Machine Translation

We address the problem of automatically finding the parameters of a stat...
Daniel Beck, et al. ∙

Science is the process of formulating hypotheses, making predictions, and measuring their outcomes. In machine translation research, the predictions are made by models whose development is the focus of the research, and the measurement, more often than not, is done via BLEU (Papineni et al., 2002). BLEU’s relative language independence, its ease of computation, and its reasonable correlation with human judgments have led to its adoption as the dominant metric for machine translation research. On the whole, it has been a boon to the community, providing a fast and cheap way for researchers to gauge the performance of their models. Together with larger-scale controlled manual evaluations, BLEU has shepherded the field through a decade and a half of quality improvements Graham et al. (2014).

This is of course not to claim there are no problems with BLEU. Its weaknesses abound, and much has been written about them (cf. Callison-Burch et al. (2006)). This paper is not, however, concerned with the shortcomings with using BLEU as a proxy for human evaluation of quality; instead, our goal is to bring attention to problems with the reporting of BLEU scores. These can be summarized as follows:

Together, these issues make it difficult to evaluate and compare BLEU scores across papers, impeding comparison and replication. We quantify these issues and show that they are serious, with variances bigger than many reported gains. In particular, we identify user-supplied reference tokenizations as a source of incompatibility. As a solution, we suggest the community use only “detokenized” reference processing, as done by the annual Conference on Machine Translation

(Bojar et al., 2017, WMT). In support of this, we release a Python script, SacreBLEU,111pip3 install sacrebleu which computes this metric and reports a version string recording the parameters. It also provides a number of other features, such as automatic download and management of common test sets.

“BLEU” does not signify any one thing, but to a constellation of parameterized methods. Among these parameters are:

It is true that many of these are often not problems in practice. Most often, there is only one reference, and the length penalty calculation is therefore moot. The maximum n-gram length is virtually always set to four, and since BLEU is corpus level, it is rare that there are any zero counts.

But it is also true that people use BLEU scores as very rough guides to MT performance across test sets and languages (comparing, for example, Chinese and Arabic). And traps exist. For example, WMT 2017 includes two references for English–Finnish. Scoring the online-B system with one reference produces a BLEU score of 22.04, and with two, 25.25. How sure are you that the results in that paper you just reviewed with those good EN-FI results were using just one reference?

The first problem dealt with parameters used in BLEU scores, and was more theoretical. We now discuss a second problem, preprocessing, and demonstrate its existence in practice.

Preprocessing includes input text modifications such as normalization (e.g., collapsing punctuation, removing special characters), tokenization (e.g., splitting off punctuation), compound-splitting, the removal of case, and so on. Its general goal is to deliver meaningful white-space delimited tokens to the MT system. Of these, tokenization is one of the most important and central. This is because BLEU is a precision metric, and changing the reference processing changes the set of n-grams against which system n-gram precision is computed. Rehbein and Genabith (2007) showed that the analogous use in the parsing community of F1

scores as rough estimates of cross-lingual parsing difficulty were unreliable, for this exact reason. We note that BLEU scores are often reported as being

Table 1 demonstrates the effect of computing BLEU scores with different reference tokenizations. We took a single system (online-B) from the WMT 2017 system outputs, and processed both it and the reference in the following ways:

The changes in each column show the effect these different schemes have, as high as 1.8 for one arc, and averaging around 1.0. The biggest is the treatment of case, which is well known, yet many papers are not clear about whether they report cased or case-insensitive BLEU.

Allowing the user to handle pre-processing of the reference has other traps. For example, many systems (particularly before sub-word splitting (Sennrich et al., 2016) was proposed) limited the vocabulary in their attempt to deal with unknown words. How sure are you that they didn’t apply the same unknown-word masking to the reference, making word matches much more likely? Such mistakes are easy to introduce.555The observations in this paper stem in part from an early version of the authors’ research workflow, which applied preprocessing to the reference, affecting scores by half a point.

2.3 Problem: Details are hard to come by

User-supplied reference processing precludes direct comparison of published numbers, but if enough detail is specified in the paper, it is at least possible to reconstruct comparable numbers. Unfortunately, this is not the trend, and even for meticulous researchers, it is often unwieldy to include this level of technical detail. In any case, it creates uncertainty and work for the reader. One has to read the experiments section, scour the footnotes, and look for other clues which are sometimes scattered throughout the paper. Figuring out what another team did is not easy.

The variations in Table 1 are only some of the possible configurations, since there is no limit to the preprocessing that a group could apply. But assuming these represent common, concrete configurations, one might wonder how easy it is to determine which of them was used by a particular paper. In Table 2, we attempt do this from a handful of influential papers in the literature. Not only are systems not comparable due to different schemes, in many cases, no easy determination can be made.

Reference tokenization must identical in order for scores to be comparable (see Figure 1 below). The widespread use of user-supplied reference preprocessing prevents this, needlessly complicating comparisons. The lack of details about preprocessing pipelines exacerbates this problem. This situation should be fixed.

3.1 The example of PARSEVAL

An instructive comparison is the PARSEVAL metric for computing parser accuracy (Black et al., 1991). PARSEVAL works by taking labeled spans of the form (N,i,j) representing a nonterminal N spanning a constituent from word i to word j

1 metric that is commonly reported and compared across parsing papers.

Computing parser F1 is not without its own set of edge cases. Do we count the TOP (ROOT) node? What about -NONE-? Punctuation? Should any labels be considered equivalent? These boundary cases are resolved by that community’s adoption of a standard codebase, evalb,666http://nlp.cs.nyu.edu/evalb/ which included a parameters file that answers each of these questions.777The configuration file, COLLINS.PRM, answers these questions as no, no, no, and ADVP=PRT. This has facilitated thirty years of comparable cross-paper comparisons on treebanks in the parsing community.888In some cases (WSJ23), on the same test set (Marcus et al., 1993).

Moses 999http://statmt.org/moses has a number of scoring scripts. Unfortunately, each of them has problems. Moses’ multi-bleu.perl cannot be used because it requires user-supplied preprocessing. The same is true of another evaluation framework, MultEval (Clark et al., 2011), which explicitly advocates for user-supplied tokenization.101010https://github.com/jhclark/multeval A good candidate is Moses’ mteval-v13a.pl, which makes use of metric-internal preprocessing and is used in the annual WMT evaluations. However, this script requires the data to be wrapped into XML. Nematus Sennrich et al. (2017) contains a version (multi-bleu-detok.perl) that removes the XML requirement. This is a good idea, but it still requires the user to manually handle the reference translations. A better approach is to keep the reference away from the user entirely.

SacreBLEU is a Python script that aims to treat BLEU with a bit more reverence:

SacreBLEU can be installed via the Python package management system:

It is open source software under the Apache 2.0 license.111111https://github.com/awslabs/sockeye/tree/master/contrib/sacrebleu

Machine translation benefits from the regular introducion of test sets for many different language arcs, from academic, government, and industry sources. This should make it easy to share and compare scores on a constant set of fresh data. It is a shame, therefore, that we are in a situation where we cannot in fact easily do so. One might be tempted to shrug this off as an unimportant detail, but as we have shown, these differences are in fact quite important, resulting in large variances in the score that are often much higher than the gains reported by a new method.

Fixing the problem is relatively simple. Groups should only report BLEU computed using a metric-internal tokenization and preprocessing scheme for the reference. With the reference processed the same way every time, scores can be directly compared across papers. We recommend the version used by WMT, and provide a new tool that makes it even easier.