In this paper, we propose a C^0 interior penalty method for mth-Laplace equation on bounded Lipschitz polyhedral domain in ℝ^d, where m and d can be any positive integers. The standard H^1-conforming piecewise r-th order polynomial space is used to approximate the exact solution u, where r can be any integer greater than or equal to m. Unlike the interior penalty method in [T. Gudi and M. Neilan, An interior penalty method for a sixth-order elliptic equation, IMA J. Numer. Anal., 31(4) (2011), pp. 1734–1753], we avoid computing D^m of numerical solution on each element and high order normal derivatives of numerical solution along mesh interfaces. Therefore our method can be easily implemented. After proving discrete H^m-norm bounded by the natural energy semi-norm associated with our method, we manage to obtain stability and optimal convergence with respect to discrete H^m-norm. Numerical experiments validate our theoretical estimate. 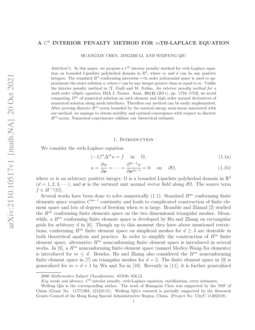 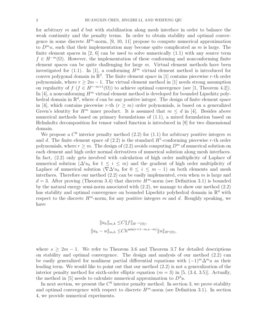 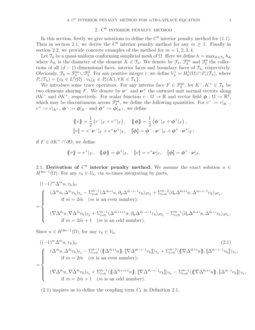 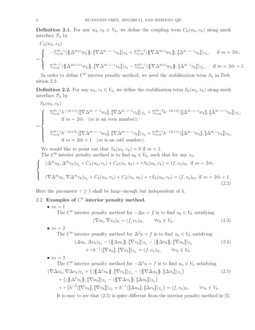 In this paper, we analyze the supercloseness result of nonsymmetric inte...
Jin Zhang, et al. ∙

Error estimates are rigorously derived for a semi-discrete version of a ...
Clark A. Pennie, et al. ∙

We consider the mth-Laplace equation

where m is an arbitrary positive integer, Ω is a bounded Lipschitz polyhedral domain in Rd (d=1,2,3,⋯), and ν

is the outward unit normal vector field along

. Though up to this moment they have above mentioned restrictions, conforming

), a mixed formulation based on Helmholtz decomposition for tensor valued function is introduced in

We propose a C0 interior penalty method (2.2) for (1.1) for arbitrary positive integers m and d. The finite element space of (2.2) is the standard H1-conforming piecewise r-th order polynomials, where r≥m. The design of (2.2) avoids computing Dm of numerical solution on each element and high order normal derivatives of numerical solution along mesh interfaces. In fact, (2.2) only gets involved with calculation of high order multiplicity of Laplace of numerical solution (Δiuh for 1≤i≤m) and the gradient of high order multiplicity of Laplace of numerical solution (∇Δiuh for 0≤i≤m−1) on both elements and mesh interfaces. Therefore our method (2.2) can be easily implemented, even when m is large and d=3. After proving (Theorem 3.4) that discrete Hm-norm (see Definition 3.1) is bounded by the natural energy semi-norm associated with (2.2), we manage to show our method (2.2) has stability and optimal convergence on bounded Lipschitz polyhedral domain in Rd with respect to the discrete Hm-norm, for any positive integers m and d. Roughly speaking, we have

where s≥2m−1. We refer to Theorem 3.6 and Theorem 3.7 for detailed descriptions on stability and optimal convergence. The design and analysis of our method (2.2

) can be easily generalized for nonlinear partial differential equations with

(−1)mΔmu as their leading term. We would like to point out that our method (2.2) is not a generalization of the interior penalty method for sixth-order elliptic equation (m=3) in [5, (3.4, 3.5)]. Actually, the method in [5] needs to calculate numerical approximation to D3u.

In next section, we present the C0 interior penalty method. In section 3, we prove stability and optimal convergence with respect to discrete Hm-norm (see Definition 3.1). In section 4, we provide numerical experiments.

Let Th be a quasi-uniform conforming simplicial mesh of Ω. Here we define h=maxK∈ThhK where hK is the diameter of the element K∈Th. We denote by Fh, Finth and F∂h the collections of all (d−1)-dimensional faces, interior faces and boundary faces of Th, respectively. Obviously, Fh=Finth∪F∂h. For any positive integer r, we define Vrh=H10(Ω)∩Pr(Th), where Pr(Th)={vh∈L2(Ω):vh|K∈Pr(K),∀K∈Th}.

We introduce some trace operators. For any interior face F∈Finth, let K−,K+∈Th be two elements sharing F. We denote by ν− and ν+ the outward unit normal vectors along ∂K− and ∂K+, respectively. For scalar function v:Ω→R and vector field ϕ:Ω→Rd, which may be discontinuous across Finth, we define the following quantities. For v−:=v|K−, v+:=v|K+, ϕ−:=ϕ|K− and ϕ+:=ϕ|K+, we define

(2.1) inspires us to define the coupling term Ch in Definition 2.1.

For any wh,vh∈Vh, we define the coupling term Ch(wh,vh) along mesh interface Fh by

In order to define C0 interior penalty method, we need the stabilization term Sh in Definition 2.2.

For any wh,vh∈Vh, we define the stabilization term Sh(wh,vh) along mesh interface Fh by

The C0 interior penalty method is to find uh∈Vh, such that for any vh,

Here the parameter τ≥1 shall be large enough but independent of h.

For any integers m≥2, we define the discrete Hm-norm ∥v∥m,h by

For any F∈F∂h, we define

For any integers r≥m≥2, there is a constant C>0 such that

We choose F∈Fh arbitrarily. There is an orthonormal coordinate system {yk}dk=1 such that the yd-axis is parallel to normal vector along F. Therefore y1-axis, ⋯, yd−1-axis are all parallel to F.

We claim that for any 1≤l≤m, there is a positive integer C′ such that

By discrete inverse inequality and the fact that y1-axis, ⋯, yd−1-axis are all parallel to F, we have that

Since y1-axis, ⋯, yd−1-axis are all parallel to F, discrete inverse inequality implies