A significant portion of the 5th generation of wireless networks will operate in the mm-wave bands. One of the several challenges associated with mm-wave propagation is to overcome shadowing due to signal blockage caused by environmental objects. Particularly susceptible are nodes in a device-to-device network that typically operate at low power and in a blockage prone environment such as crowded open areas. In this work, we provide an insight into the effect of blockages on the signal quality for an open area device-to-device scenario. We propose a blockage model based on the homogeneous Poisson Point Process. The model provides the average signal attenuation as a soft metric that quantifies the extent of blockage. This not only indicates whether the signal is blocked but also measures how much the signal is attenuated due to one or more blockers. The analytical results are confirmed with the help of Monte Carlo simulations for real-world blocker placement in the environment. 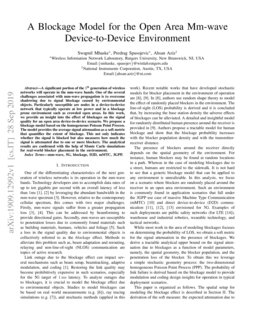 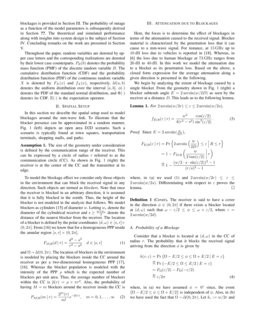 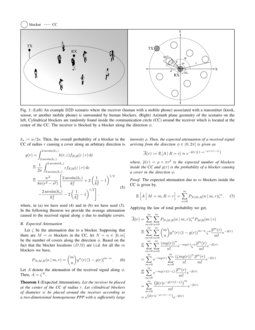 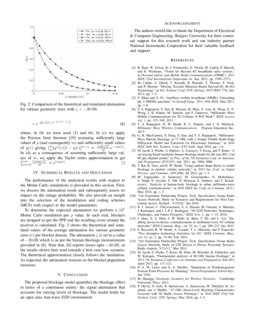 We introduce an encryption device based on wave-chaos to enhance the phy...
Hong Soo Park, et al. ∙

One of the differentiating characteristics of the next generation of wireless networks is its operation in the mm-wave bands. Technology developers aim to accomplish data rates of up to ten gigabits per second with an overall latency of less than 1ms [1], [2] by leveraging the abundant bandwidth in the mm-wave spectrum [3]. However, relative to the contemporary cellular spectrum, this comes with two major challenges. Firstly, mm-wave signals suffer from a greater propagation loss [3], [4]. This can be addressed by beamforming to provide directional gains. Secondly, mm-waves are susceptible to penetration losses due to commonly found materials such as building materials, humans, vehicles and foliage [5]. Such a loss in the signal quality due to environmental objects is collectively referred to as the blockage effect. Methods to alleviate this problem such as, beam adaptation and rerouting, relaying and non-line-of-sight (NLOS) communication are topics of active research. Link outage due to the blockage effect can impact several mechanisms such as beam setup, beamtracking, adaptive modulation, and coding [1]. Restoring the link quality may become prohibitively expensive in such scenarios, especially for the 5G target of 1ms latency. To analyze outages due to blockages, it is crucial to model the blockage effect due to environmental objects. Studies to model blockages can be based on real world measurements (e.g. [6]), ray tracing simulations (e.g. [7]), and stochastic methods (applied in this work). Recent notable works that have developed stochastic models for blocker placement in the environment of operation are [8], [9]. In [8]

, authors use random shape theory to model the effect of randomly placed blockers in the environment. The line-of-sight (LOS) probability is derived and it is concluded that, by increasing the base station density the adverse effects of blockages can be alleviated. A detailed and insightful model for randomly distributed human presence around the receiver is provided in

[9]. Authors propose a tractable model for human blockage and show that the blockage probability increases with the blocker population density and with the transmitter-receiver distance. The presence of blockers around the receiver directly depends on the spatial geometry of the environment. For instance, human blockers may be found at random locations in a park. Whereas in the case of modeling blockages due to a street, humans are restricted to the sidewalk. It is not hard to see that a generic blockage model that can be applied to any environment is unrealizable. In this analysis, we focus on a scenario where blockers are randomly placed around the receiver in an open area environment. Such an environment is commonly found in application scenarios that fall under the 3GPP use case of massive Machine Type Communication (mMTC) [10] and direct device-to-device (D2D) communication [11], [12], [13] envisioned for 5G. Examples of such deployments are public safety networks (for LTE [14]), warehouse and industrial robotics, wearable technology, and tactical networks. While most work in the area of modeling blockages focuses on determining the probability of LOS, we obtain a soft metric for the signal attenuation in the presence of blockages. We derive a tractable analytical upper bound on the signal attenuation due to blockages as a function of model parameters, namely, the spatial geometry, the blocker population, and the penetration loss of the blocker. To obtain this we leverage a simple stochastic geometry process: the two-dimensional homogeneous Poisson Point Process (PPP). The probability of link failure is derived based on the blockage model to provide modulation and coding design insights for operation in typical deployment scenarios. This paper is organized as follows. The spatial setup for modeling the blockage effect is described in Section II. The derivation of the soft measure: the expected attenuation due to blockages is provided in Section III. The probability of outage as a function of the model parameters is subsequently derived in Section LABEL:sec:otg_anl. The theoretical and simulated performance along with insights into system design is the subject of Section IV. Concluding remarks on the work are presented in Section V.

denotes the uniform distribution over the interval

denotes the PDF of the standard normal distribution, and

Φ(⋅) denotes its CDF. E(⋅) is the expectation operator.

In this section we describe the spatial setup used to model blockages around the mm-wave link. To illustrate that the blocker presence can be approximated in a random manner, Fig. 1 (left) depicts an open area D2D scenario. Such a scenario is typically found at town squares, transportation terminals, shopping malls, and parks.

The size of the geometry under consideration is defined by the communication range of the receiver. This can be expressed by a circle of radius r referred to as the communication circle (CC). As shown in Fig. 1 (right) the receiver is at the center of the CC and the transmitter at its edge.

To model the blockage effect we consider only those objects in the environment that can block the received signal in any direction. Such objects are termed as blockers. Note that once the receiver is blocked in an arbitrary direction, it is assumed that it is fully blocked in the zenith. Thus, the height of the blocker is not modeled in the analysis that follows. We model blockers as cylinders [15] of diameter w. Letting wr denote the diameter of the cylindrical receiver and s≥w+wr2 denote the distance of the nearest blocker from the receiver. The location of a blocker is defined by the polar coordinates (d,ω)∈[s,r]×(0,2π]. From [16] we know that for a homogeneous PPP inside the annular region [s,r]×(0,2π],

Iii Attenuation due to Blockages

Here, the focus is to determine the effect of blockages in terms of the attenuation caused to the received signal. Blocker material is characterized by the penetration loss that it can cause to a mm-wave signal. For instance, at 15GHz up to 10dB loss due to vehicles is reported in [18]. Whereas, in [6] the loss due to human blockage at 73GHz ranges from 20dB to 40dB. In this work we model the attenuation due to a blocker as its penetration loss. Based on the above, a closed form expression for the average attenuation along a given direction is presented in the following. We begin by analyzing the extent of blockage caused by a single blocker. From the geometry shown in Fig. 1 (right) a blocker subtends angle E=2arcsin(w/2D) as seen by the receiver at a distance D. This leads us to the following lemma.

Iii-a Probability of a Blockage

Consider that a blocker is located at (d,ω) in the CC of radius r. The probability that it blocks the received signal arriving from the direction ϕ is given by

where, in (a) we have used (4) and in (b) we have used (3). In the following theorem we provide the average attenuation caused to the received signal along ϕ due to multiple covers.

Let ζ be the attenuation due to a blocker. Supposing that there are M=m blockers in the CC, let N=n∈[0,m] be the number of covers along the direction ϕ. Based on the fact that the blocker locations (D,Ω) are i.i.d. for all the m blockers we have,

Let A denote the attenuation of the received signal along ϕ. Then, A=ζN.

Let the receiver be placed at the center of the CC of radius r. Let cylindrical blockers of diameter w be placed around the receiver according to a two-dimensional homogeneous PPP with a sufficiently large intensity ρ. Then, the expected attenuation of a received signal arriving from the direction ϕ∈(0,2π] is given as

where, ¯¯¯ρ(r)=ρ×πr2 is the expected number of blockers inside the CC and g(r) is the probability of a blocker causing a cover in the direction ϕ.

The expected attenuation due to m blockers inside the CC is given by,

Applying the law of total probability we get,

The performance of the analytical results with respect to the Monte Carlo simulations is provided in this section. First, we discuss the attenuation result and subsequently assess its impact on the outage probability. We also provide an insight into the selection of the modulation and coding schemes (MCS) with respect to the model parameters. To determine the expected attenuation we perform a 105 Monte Carlo simulation per ρ value. In each trial, blockers are dropped as per the PPP and the resulting cover around the receiver is calculated.

Fig. 2 shows the theoretical and simulated values of the average attenuation for various geometry sizes (r) per blocker density. The attenuation ζ is set to a value of −20dB which is as per the human blockage measurements provided in [6]. Note that, [6] reports losses upto −40dB, so the results shown here tend towards a best case loss scenario. The theoretical approximation closely follows the simulation. As expected, the attenuation worsens as the blocker population increases.

The proposed blockage model quantifies the blockage effect in terms of a continuous metric: the signal attenuation that accounts for varying levels of blockage. The model holds for an open area mm-wave D2D environment.

The authors would like to thank the Department of Electrical & Computer Engineering, Rutgers University for their continual support for this research work and our industry partner National Instruments Corporation for their valuable feedback and support.