A Bimodal Model for Extremes Data 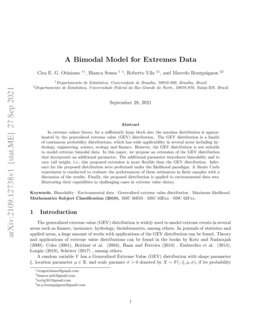 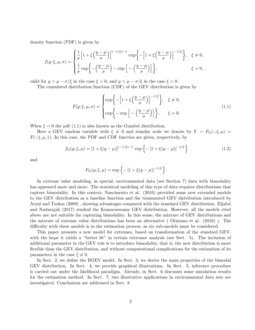 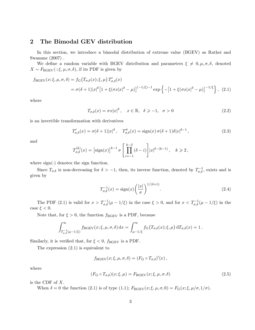 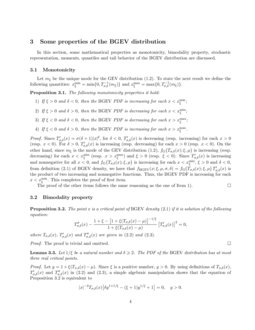 A Model for Bimodal Rates and Proportions

The beta model is the most important distribution for fitting data with ...
Roberto Vila, et al. ∙

Choice of mixture Poisson models based on Extreme value theory

The block maxima method is one of the most popular approaches for extrem...
Simone A. Padoan, et al. ∙

The generalized extreme value (GEV) distribution is widely used to model extreme events in several areas such as finance, insurance, hydrology, bioinformatics, among others. In journals of statistics and applied areas, a huge amount of works with applications of the GEV distribution can be found. Theory and applications of extreme value distributions can be found in the books by Kotz and Nadarajah (2000), Coles (2001), Beirlant et al. (2004), Haan and Ferreira (2010) , Embrechts et al. (2013), Longin (2016), Scheirer (2017) , among others.

, if its probability density function (PDF) is given by

When ξ=0 the pdf (1.1) is also known as the Gumbel distribution.

Here a GEV random variable with ξ≠0 and standar scale we denote by Y∼FG(⋅;ξ,μ)=F(⋅;ξ,μ,1). In this case, the PDF and CDF functios are given, respectively, by

This paper presents a new model for extremes, based on transformation of the standard GEV, with the hope it yields a “better fit” in certain extremes analysis (see Sect. 5). The inclusion of additional parameter in the GEV role is to introduce bimodality, that is, the new distribution is more flexible than the GEV distribution, and without computational complications for the estimation of its parameters in the case ξ≠0.

In Sect. 2, we define the BGEV model. In Sect. 3, we derive the main properties of the bimodal GEV distribution. In Sect. 4, we provide graphical illustrations. In Sect. 5, inference procedure is carried out under the likelihood paradigm. Already, in Sect. 6 discusses some simulation results for the estimation method. In Sect. 7, two illustrative applications in environmental data sets are investigated. Conclusions are addressed in Sect. 8.

In this section, we introduce a bimodal distribution of extreme value (BGEV) as Rathei and Swamme (2007) .

We define a random variable with BGEV distribution and parameters ξ≠0,μ,σ,δ, denoted X∼FBGEV(⋅;ξ,μ,σ,δ), if its PDF is given by

is an invertible transformation with derivatives

Since Tσ,δ is non-decreasing for δ>−1, then, its inverse function, denoted by T−1σ,δ, exists and is given by

Note that, for ξ>0, the function fBGEV is a PDF, because

Similarly, it is verified that, for ξ<0, fBGEV is a PDF.

The expression (2) is equivalent to

3 Some properties of the BGEV distribution

In this section, some mathematical properties as monotonicity, bimodality property, stochastic representation, moments, quantiles and tail behavior of the BGEV distribution are discussed.

Let mξ be the unique mode for the GEV distribution (1.2). To state the next result we define the following quantities: xminξ=min{0,T−1σ,δ(mξ)} and xmaxξ=max{0,T−1σ,δ(mξ)}.

The following monotonicity properties it hold:

The proof of the other items follows the same reasoning as the one of Item 1). ∎

The point x is a critical point of BGEV density (2) if it is solution of the following equation:

The proof is trivial and omitted. ∎

Let 1/ξ be a natural number and δ⩾2. The PDF of the BGEV distribution has at most three real critical points.

By Descartes’ rule of signs (Griffiths 1947 ; Xue 2012 ), the polynomial p(y) has two sign changes (the sequence signs is +, −, +), meaning that this polynomial has two or zero positive roots. This completes the proof. ∎

If 1/ξ⩾2 is an even natural number and δ⩾2, then the PDF of the BGEV distribution is uni- or bimodal.

Finally, since limx→±∞fBGEV(x;ξ,μ,σ,δ)=0, the uni- or bimodality of the BGEV density follows. ∎

3.3 Stochastic representation of the BGEV distribution

This prove the Item 1). Analogously, the proof of second item follows.

Here we give a closed analytical formula for the kth moment of a random variable with BGEV distribution.

For ξ>0, by definition of expectation and the expression (1.2), we have

To solve the integral of (3.3) we use the Newton’s binomial formula, thus

where in the last line we used the new substitution z=w1/ξ.

The proof is completed by expressing as integrals of (3.4) and (3.5) in terms of the incomplete gamma functions and then updating the equation (3.2).

For ξ<0 the proof is similar. ∎

In the next section, through Monte Carlo simulation studies, we test the behavior of the parameter estimates of the BGEV model. The random samples of the population are simulated using the inverse transformation method based on quantiles. The quantile function of a random variable X∼FBGEV(⋅;ξ,μ,σ,δ) is defined by

According to Embrechts et al. (2013) , asymptotic estimates of probability models are omnipresent in statistics, insurance mathematics, mathematical finance, and hydrology. In this sense, the theory of regular variation plays a crucial role. Concepts and properties of regularly varying can be found in the book of Bingham et al. (1987) In order to study the asymptotic behavior of the tail of the BGEV distribution, here we show some of the results of regular variation.

A positive Lebesgue measurable function h on (0,∞) is regularly varying at ∞ of index α∈R (h∈Rα) if

for some L∈R0, L0 a slowly varying function. The expression (3.7) indicates that the tail of the distribution F slowly decays, as x−α, that is F has heavy (right) tail with index α. Thus, F is Pareto-like distribution.

The proof follows of the straightforward calculation of

From (3.8) we have that FBGEV is Pareto-like distribution with tail index (δ+1)/ξ. The new δ parameter affects the weight of the tail.

The role that the parameters ξ, μ, σ, δ, and play in the BGEV distribution were investigated graphically by generating different densities with variations in each parameter. Fig. 1 shows that σ is a scale parameter. According to Fig. 2, the shape of the BGEV PDF changed by varying the μ parameter. That is, μ is a shape parameter. Fig. 2 suggests that depending on the combinatation of the parameters values ξ and μ the BGEV density can be unimodal or bimodal. For example, fBGEV(.;2,μ,1,2) is unimodal and fBGEV(.;0.5,μ,1,2) is bimodal. In the bimodal case, the first mode value is greater than the second mode value for μ∈[0,0.25), while for μ>0.25 the second mode value is greater than the first mode. Figures 3 and 4 correspond to variations of the new parameter δ. When δ=0 the BGEV coincides with the basic GEV distribution. Two scenarios were considered. Scenario 1 for ξ<0 (see Fig. 3), and scenario 2 for ξ>0 (see Fig. 4 ). In scenario 1 , Fig. 3, when δ≤0 the PDF is unimodal and for δ>0 the PDF is bimodal. In bimodal case, the mode values increases as delta grows. In scenario 2, the Fig. 4 shows that when delta takes positive or negative values close to zero and ξ>1 the PDF is bimodal. In this case, the mode value also increases as delta increases.

In this section we present the expressions to be calculated to obtain the maximum likelihood estimators for the parameters of a BGEV distribution.

Then, the maximum likelihood estimates of μ,σ,δ,ξ are the solutions of the following system of equations

the second-order partial derivatives of the log-likelihood function ℓn(Θ;x) are given by

and, by Schwarz’s theorem or Clairaut’s theorem on equality of mixed partials (James 1966), the second-order mixed derivatives of ℓn(Θ;x) can be written as

If X∼FBGEV, under certain regularity conditions, the Fisher information matrix (FIM) may also be written as

where ∂2ℓ1(Θ;x)/∂θi∂θj are given in (5.3) and (5.4) by taking n=1. It is clear that the analytical calculations of the FIM above are difficult. But by using the Monte Carlo estimates of the Hessian of the negative log-likelihood function we can form an average of these ones as an estimate of the FIM (Spall 2005).

The performance of maximum likelihood estimators calculated was tested by Monte Carlo simulation with 45 combinations of ξ,μ and δ. We consider the scale parameter always equal to 1; σ=1.

We use the following procedure: (i) Generate random samples of X∼FBGEV(⋅;ξ,μ,σ,δ) by using the quantile function (3.6). Were generated M=100 random samples (replications) of size N=50, 100, 250, 1000, for each choice of θ. (ii) Calculate the maximum likelihood estimates (MLEs) of θ=(ξ,μ,δ) using the equations (5.1)- (5.2). Here, use the Nelder and Mead’ optimization method implemented in the R statistical program (Nelder and Mead 1965). (iii) For the initial value, consider the real parameter value added by a value of a auniform variable in (0,1).