A benchmark with decomposed distribution shifts for 360 monocular depth estimation

In this work we contribute a distribution shift benchmark for a computer vision task; monocular depth estimation. Our differentiation is the decomposition of the wider distribution shift of uncontrolled testing on in-the-wild data, to three distinct distribution shifts. Specifically, we generate data via synthesis and analyze them to produce covariate (color input), prior (depth output) and concept (their relationship) distribution shifts. We also synthesize combinations and show how each one is indeed a different challenge to address, as stacking them produces increased performance drops and cannot be addressed horizontally using standard approaches. 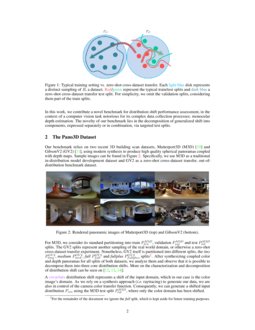 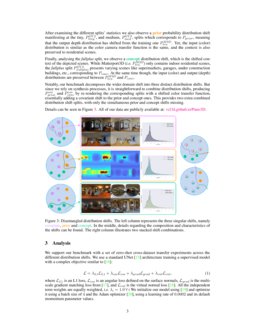 Data-driven methods are conditioned on the data which are available during the model development but are to be applied on real world data. Considering that the former data distribution is Ps=σ(Pr), which is the result of applying a sampling function σ(⋅) to the real world distribution Pr. Typically, Ps is separated into different splits Ptrn and Pval

, used to train the model and validate its behaviour respectively, with the latter process driving model selection. A data distribution shift can be described as the condition where the joint distribution

P of inputs and outputs differs between the training and test stages [1].

This is an actual problem that many practical applications face, affecting their overall performance, robustness and reliability. The phenomenon is more prominent in tasks where annotated data collection is difficult and has been generally addressed in the literature as the domain shift [2] or the generalization of data-driven models [3, 4], or otherwise as out-of-distribution robustness [5]. More information about out-of-distribution (OOD) learning and generalization can be found in recent surveys [6, 7, 8].

Up to now, most works approach this problem in its general setting via zero-shot cross-dataset transfer experiments that aim at assessing model performance under a general distribution shift, considering two different samplings Ps1=σ1(Pr) and Ps2=σ2(Pr), as seen in Figure 1. A recent benchmark [9] provided simultaneously data for sub-population shift, a special case of distribution shifts, and a generic domain generalization shift across a number of datasets and tasks.

In this work, we contribute a novel benchmark for distribution shift performance assessment, in the context of a computer vision task notorious for its complex data collection processes; monocular depth estimation. The novelty of our benchmark lies in the decomposition of generalized shift into components, expressed separately or in combination, via targeted test splits.

For M3D, we consider its standard partitioning into train PM3Dtrn, validation PM3Dval and test PM3Dtst splits. The GV2 splits represent another sampling of the real world domain, or otherwise a zero-shot cross-dataset transfer experiment. Nonetheless, GV2 itself is partitioned into different splits, the tiny PGV2tiny, medium PGV2med, full PGV2full and fullplus PGV2fullplus splits111For the remainder of the document we ignore the full split, which is kept aside for future training purposes.. After synthesizing coupled color and depth panoramas for all splits of both datasets, we analyze them and observe that it is possible to decompose them into three core distribution shifts. More on the characterization and decomposition of distribution shift can be seen on [12, 13, 14]:

A covariate distribution shift represents a shift of the input domain, which in our case is the color image’s domain. As we rely on a synthesis approach (i.e. raytracing) to generate our data, we are also in control of the camera color transfer function. Consequently, we can generate a shifted input distribution Pcov using the M3D test split PM3Dtst, where only the color domain has been shifted.

After examining the different splits’ statistics we also observe a priorprobability distribution shift manifesting at the tiny, PGV2tiny, and medium, PGV2med, splits which corresponds to Pprior, meaning that the output depth distribution has shifted from the training one PM3Dtrn. Yet, the input (color) distribution is similar as the color camera transfer function is the same, and the context is also preserved to residential scenes.

Finally, analysing the fullplus split, we observe a concept distribution shift, which is the shifted context of the depicted scenes. While Matterport3D (i.e. PM3Dtrn) only contains indoor residential scenes, the fullplus split PGV2fullplus presents varying scenes like supermarkets, garages, under construction buildings, etc., corresponding to Pconc. At the same time though, the input (color) and output (depth) distributions are preserved between PM3Dtrn and Pconc.

Details can be seen in Figure 3. All of our data are publicly available at: vcl3d.github.io/Pano3D.

We support our benchmark with a set of zero-shot cross-dataset transfer experiments across the different distribution shifts. We use a standard UNet [15] architecture training a supervised model with a complex objective similar to [16]:

where LL1 is an L1 loss, Lcos is an angular loss defined on the surface normals, Lgrad is the multi-scale gradient matching loss from [17], and Lvnl is the virtual normal loss [18]. All the independent term weights are equally weighted, i.e. λi=1.0∀i We initialize our model using [19] and optimize it using a batch size of 4 and the Adam optimizer [20], using a learning rate of 0.0002 and its default momentum parameter values.

When training we only use PM3Dtrn and for all experiments we calculate standard metrics for depth estimation [21], as well as boundary [22, 23] and normals RMSE and accuracies [24]. We aggregate performance across the different traits (direct depth, boundary and smoothness) them using a set of indicators:

Through these indicators we present an holistic view of how task performance is affected from the different distribution shifts. In the following subsections, we examine isolated distribution shifts as well as some of their combinations.

with all hyperparameters preserved, and train one model initialized with pretrained weights and another one initialized using

[19]. Figure 6 presents the results when tested on our benchmark’s different shifts. Interestingly, we observe a performance boost in the splits where only a single distribution shift is present, where in contrast, the ones with two stacked distribution shifts show minimal gains. This indicates that pretraining does not necessarily improve generalization – in the form of more transferable initial features – but, instead, only provides a better parameter initialization leading to higher quality parameters’ optimization.

The full array of the conducted experiments and their detailed results can be found in Table 1.

Distribution shifting is pivotal to the real-world application of data-driven methods. In this work, we contribute a distribution shift benchmark for an ill-posed dense computer vision task, with notoriously difficult data collection process. Seeking to facilitate future research towards addressing this challenging problem, we decompose distribution shift to input (covariate), output (prior) and their relationship (concept), providing an experimental baseline for further experimentation and understanding.