A Benchmark of Data Loss Bugs for Android Apps

Android apps must be able to deal with both stop events, which require immediately stopping the execution of the app without losing state information, and start events, which require resuming the execution of the app at the same point it was stopped. Support to these kinds of events must be explicitly implemented by developers who unfortunately often fail to implement the proper logic for saving and restoring the state of an app. As a consequence apps can lose data when moved to background and then back to foreground (e.g., to answer a call) or when the screen is simply rotated. These faults can be the cause of annoying usability issues and unexpected crashes. This paper presents a public benchmark of 110 data loss faults in Android apps that we systematically collected to facilitate research and experimentation with these problems. The benchmark is available on GitLab and includes the faulty apps, the fixed apps (when available), the test cases to automatically reproduce the problems, and additional information that may help researchers in their tasks. 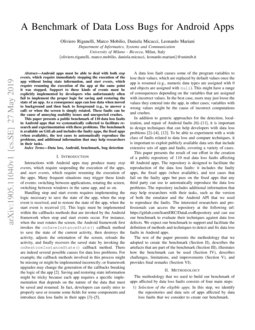 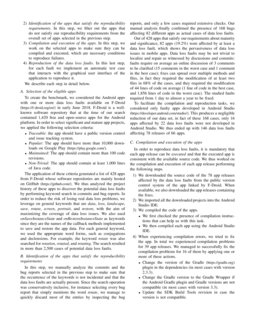 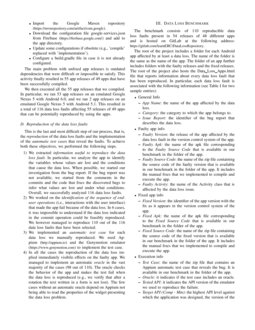 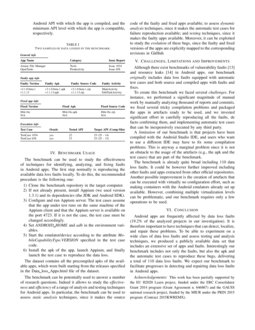 Android apps must work correctly even if their execution is interrupted ...
Oliviero Riganelli, et al. ∙

Dealing with the evolution of operating systems is challenging for devel...
Marco Mobilio, et al. ∙

Simple Spyware: Androids Invisible Foreground Services and How to (Ab)use Them

Controlling Interactions with Libraries in Android Apps Through Runtime Enforcement

Handling stop and start events requires implementing the logic necessary to save the state of the app, when the stop event is received, and to restore the state of the app, when the start event is received [1]. This logic must be implemented within the callbacks methods that are invoked by the Android framework when stop and start events occur. For instance, when the user rotates the screen, the Android framework first invokes the onSaveInstanceState() callback method to save the state of the current activity, then destroys the activity, adjusts the orientation of the screen, reloads the activity, and finally recovers the saved state by invoking the onRestoreInstanceState() callback method. There are indeed several possible causes for data loss problems. For example, the callback methods involved in this process might be missing or might be implemented incorrectly; or framework upgrades may change the generation of the callbacks breaking the logic of the app [2]. Saving and restoring state information might be tricky because each app requires a specific implementation that depends on the nature of the data that must be saved and resumed. In fact, developers can easily miss to properly save or resume some fields for some components and introduce data loss faults in their apps [3, 4, 5].

A data loss fault causes some of the program variables to lose their values, which are replaced by default values once the app is resumed (e.g., numeric data types are assigned with 0 and objects are assigned with null). This might have a range of consequences depending on the variables that are assigned with incorrect values. In the best case, users may just loose the values they entered into the app, in other cases, variables with wrong values might be the cause of incorrect computations and crashes.

In addition to generic approaches for the detection, localization, and repair of Android faults [6, 7, 8, 9, 10, 11], it is important to design techniques that can help developers with data loss problems [3, 4, 12, 2]. To be able to experiment with a wide class of faults related to data loss and compare techniques, it is important to exploit publicly available data sets that include extensive sets of apps and faults, covering a variety of cases.

This paper presents the result of our effort in the creation of a public repository of 110 real data loss faults affecting 48 Android apps. The repository is designed to facilitate the reproduction of the data loss faults: it includes the faulty apps, the fixed apps (when available), and test cases that fail on the faulty apps but pass on the fixed apps that any third party can use to automatically reproduce the data loss problems. The repository includes additional information that may help researchers with their tasks, such as the version of both the emulator and the Android API that we used to reproduce the faults. The interested researchers and professionals can access the repository at the following url: https://gitlab.com/learnERC/DataLossRepository and can use our benchmark to evaluate their techniques against data loss defects. We expect our benchmark to support and facilitate the definition of methods and techniques to detect and fix data loss faults in Android apps.

The methodology that we used to build our benchmark of apps affected by data loss faults consists of four main steps:

We describe each step in detail below.

Ii-a Selection of the eligible apps

To create the benchmark, we considered the Android apps with one or more data loss faults available on F-Droid (https://f-droid.org/en/) in early June 2018. F-Droid is a well-known software repository that at the time of our search contained 1,420 free and open-source apps for the Android platform. In order to select significant and mature app projects, we applied the following selection criteria:

The application of these criteria generated a list of 428 apps from F-Droid whose software repositories are mainly hosted on GitHub (https://github.com/). We thus analyzed the project history of these apps to discover the potential data loss faults by performing keyword search in commits and bug reports. In order to reduce the risk of losing real data loss problems, we leverage on general keywords that are data, loss, landscape, save, rotate, screen, portrait, and restore, with the aim of maximizing the coverage of data loss issues. We also used onSaveInstanceState and onRestoreInstanceState as keywords since they are the names of the callback methods implemented to save and restore the app data. For each general keyword, we used the appropriate word forms, such as conjugations and declensions. For example, the keyword rotate was also searched for rotation, rotated, and rotating. The search resulted in more than 2,500 cases of potential data loss faults.

Ii-B Identification of the apps that satisfy the reproducibility requirements

In this step, we manually analyze the commits and the bug reports selected in the previous step to make sure that the occurrence of the keywords is not incidental and that the data loss faults are actually present. Since the search operation was conservatively inclusive, for instance selecting every bug report that simply mentions the word rotate, we manage to quickly discard most of the entries by inspecting the bug reports, and only a few cases required extensive checks. Our manual analysis finally confirmed the presence of 168 bugs affecting 82 different apps as actual cases of data loss faults.

Out of 428 apps that satisfy our requirements about maturity and significance, 82 apps (19.2%) were affected by at least a data loss fault, which shows the pervasiveness of data loss issues in mobile apps. Data loss faults may be not trivial to localize and repair as witnessed by discussions and commits: faults require on average an online discussion of 3 comments to be clarified (15 comments in the worst case and 1 comment in the best case); fixes can spread over multiple methods and files, in fact they required the modification of at least two files in 68% of the cases, and they required the modification of 44 lines of code on average (1 line of code in the best case, and 1,856 lines of code in the worst case). The studied faults required from 1 day to almost a year to be fixed.

To facilitate the compilation and reproduction tasks, we considered only faulty apps developed in Android Studio (https://developer.android.com/studio/). This produces a negligible reduction of our data set, in fact of these 168 cases, only 16 apps affected by 22 data loss faults were not developed in Android Studio. We thus ended up with 146 data loss faults affecting 78 releases of 66 apps.

Ii-C Compilation and execution of the apps

In order to reproduce data loss faults, it is mandatory that each app release can be executed and that the executed app is consistent with the available source code. We thus worked on the compilation and execution of each app release performing the following steps.

The main problem with unfixed app releases is outdated dependencies that were difficult or impossible to satisfy. This activity finally resulted in 55 app releases of 49 apps that have been successfully compiled.

This is the last and most difficult step of our process, that is, the reproduction of the data loss faults and the implementation of the automatic test cases that reveal the faults. To achieve both these objectives, we performed the following steps.

The benchmark consists of 110 reproducible data loss faults present in 54 releases of 48 different apps and is hosted on GitLab at the following address:https://gitlab.com/learnERC/DataLossRepository.

The root of the project includes a folder for each Android app affected by at least a data loss. The name of the folder is the same as the name of the app. The folder of an app further includes folders with the faulty releases and the fixed releases. The root of the project also hosts the Data_Loss_Apps.html file that reports information about every data loss fault that has been reproduced. In particular, each data loss fault is associated with the following information (see Table I for two sample entries):

The benchmark can be used to study the effectiveness of techniques for identifying, analyzing, and fixing faults in Android apps. The first step normally is reproducing the available data loss faults locally. To do this, the recommended procedure is the following one:

The dataset contains all the precompiled apks of the available apps, which were built starting from the releases specified in the Data_loss_Apps.html file of the dataset.

Although there exist benchmarks of vulnerability faults [13] and resource leaks [14] in Android apps, our benchmark originally includes data loss faults equipped with automatic test cases and both source and compiled apps with faults and fixes.

To create this benchmark we faced several challenges. For instance, we performed a significant magnitude of manual work by manually analyzing thousand of reports and commits, we fixed several tricky compilation problems and packaged the apps in artefacts ready to be used, and we invested significant effort in carefully reproducing all the faults, de facto confirming them, and implementing automatic test cases that can be inexpensively executed by any third party.

A limitation of our benchmark is that projects have been compiled with the Android Studio IDE, and users who want to use a different IDE may have to fix some compilation problems. This is anyway a marginal problem since it is not an obstacle to the usage of the artefacts (e.g., the apk and the test cases) that are part of the benchmark.

The benchmark is already quite broad including 110 data loss faults. It could be however further improved including other faults and apps extracted from other official repositories. Another possible improvement is the creation of artefacts that can be executed with virtually no configuration effort, such as making containers with the Android emulators already set up available. However, combining multiple virtualization levels can be problematic, and our benchmark requires only a few operations to be used.

Android apps are frequently affected by data loss faults (19.2% of the analyzed projects in our investigation). It is therefore important to have techniques that can detect, localize, and repair these problems. To be able to experiment on a wide class of data loss faults and assess testing and analysis techniques, we produced a publicly available data set that includes an extensive set of apps and faults. Interestingly our benchmark includes not only the faults, but also the apk and the automatic test cases to reproduce these bugs, delivering a total of 110 data loss faults. We expect our benchmark to facilitate progresses in detecting and repairing data loss faults in Android apps.

This work has been partially supported by the EU H2020 Learn project, funded under the ERC Consolidator Grant 2014 program (Grant Agreement n. 646867) and the GAUSS national research project, funded by the MIUR under the PRIN 2015 program (Contract 2015KWREMX).