We study the discrete Bamboo Garden Trimming problem (BGT), where we are given n bamboos with different growth rates. At the end of each day, one can cut down one bamboo to height zero. The goal in BGT is to make a perpetual schedule of cuts such that the height of the tallest bamboo ever is minimized. Here, we improve the current best approximation guarantee by designing a 12/7-approximation algorithm. This result is based on a reduction to the Pinwheel Scheduling problem. We show that a guarantee of 12/7 is essentially the best we can hope for if our algorithm is based on this type of reduction. 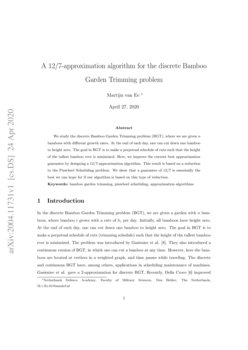 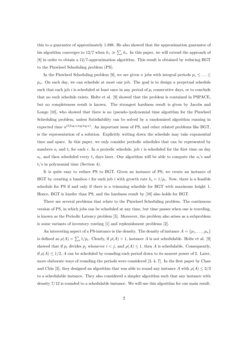 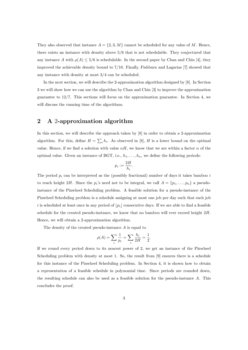 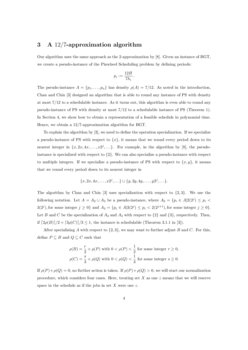 In the discrete Bamboo Garden Trimming problem (BGT), we are given a garden with n bamboos, where bamboo i grows with a rate of hi per day. Initially, all bamboos have height zero. At the end of each day, one can cut down one bamboo to height zero. The goal in BGT is to make a perpetual schedule of cuts (trimming schedule) such that the height of the tallest bamboo ever is minimized. The problem was introduced by Gasieniec et al. [8]. They also introduced a continuous version of BGT, in which one can cut a bamboo at any time. However, here the bamboos are located at vertices in a weighted graph, and time passes while traveling. The discrete and continuous BGT have, among others, applications in scheduling maintenance of machines. Gasieniec et al. gave a 2-approximation for discrete BGT. Recently, Della Croce [6] improved this to a guarantee of approximately 1.888. He also showed that the approximation guarantee of his algorithm converges to 12/7 when h1≫∑ihi. In this paper, we will extend the approach of [8] in order to obtain a 12/7-approximation algorithm. This result is obtained by reducing BGT to the Pinwheel Scheduling problem (PS).

In the Pinwheel Scheduling problem [9], we are given n jobs with integral periods p1≤…≤pn. On each day, we can schedule at most one job. The goal is to design a perpetual schedule such that each job i is scheduled at least once in any period of pi consecutive days, or to conclude that no such schedule exists. Holte et al. [9] showed that the problem is contained in PSPACE, but no completeness result is known. The strongest hardness result is given by Jacobs and Longo [10], who showed that there is no (pseudo-)polynomial time algorithm for the Pinwheel Scheduling problem, unless Satisfiability can be solved by a randomized algorithm running in expected time nO(lognloglogn). An important issue of PS, and other related problems like BGT, is the representation of a solution. Explicitly writing down the schedule may take exponential time and space. In this paper, we only consider periodic schedules that can be represented by numbers oi and ti for each i. In a periodic schedule, job i is scheduled for the first time on day oi, and then scheduled every ti days later. Our algorithm will be able to compute the oi’s and ti’s in polynomial time (Section 4).

It is quite easy to reduce PS to BGT. Given an instance of PS, we create an instance of BGT by creating a bamboo i for each job i with growth rate hi=1/pi. Now, there is a feasible schedule for PS if and only if there is a trimming schedule for BGT with maximum height 1. Hence, BGT is harder than PS, and the hardness result by [10] also holds for BGT.

There are several problems that relate to the Pinwheel Scheduling problem. The continuous version of PS, in which jobs can be scheduled at any time, but time passes when one is traveling, is known as the Periodic Latency problem [5]. Moreover, the problem also arises as a subproblem is some variants of inventory routing [1] and replenishment problems [2].

An interesting aspect of a PS-instance is the density. The density of instance A={p1,…,pn} is defined as ρ(A)=∑i1/pi. Clearly, if ρ(A)>1, instance A is not schedulable. Holte et al. [9] showed that if pi divides pj whenever i<j, and ρ(A)≤1, then A is schedulable. Consequently, if ρ(A)≤1/2, A can be scheduled by rounding each period down to its nearest power of 2. Later, more elaborate ways of rounding the periods were considered [3, 4, 7]. In the first paper by Chan and Chin [3], they designed an algorithm that was able to round any instance A with ρ(A)≤2/3 to a schedulable instance. They also considered a simpler algorithm such that any instance with density 7/12 is rounded to a schedulable instance. We will use this algorithm for our main result. They also observed that instance A={2,3,M} cannot be scheduled for any value of M. Hence, there exists an instance with density above 5/6 that is not schedulable. They conjectured that any instance A with ρ(A)≤5/6 is schedulable. In the second paper by Chan and Chin [4], they improved the achievable density bound to 7/10. Finally, Fishburn and Lagarias [7] showed that any instance with density at most 3/4 can be scheduled.

In this section, we will describe the approach taken by [8] in order to obtain a 2-approximation algorithm. For this, define H=∑ihi. As observed in [8], H is a lower bound on the optimal value. Hence, if we find a solution with value αH, we know that we are within a factor α of the optimal value. Given an instance of BGT, i.e., h1,…,hn, we define the following periods:

The period pi can be interpreted as the (possibly fractional) number of days it takes bamboo i to reach height 2H. Since the pi’s need not to be integral, we call A={p1,…,pn} a pseudo-instance of the Pinwheel Scheduling problem. A feasible solution for a pseudo-instance of the Pinwheel Scheduling problem is a schedule assigning at most one job per day such that each job i is scheduled at least once in any period of ⌊pi⌋ consecutive days. If we are able to find a feasible schedule for the created pseudo-instance, we know that no bamboo will ever exceed height 2H. Hence, we will obtain a 2-approximation algorithm.

The density of the created pseudo-instance A is equal to

If we round every period down to its nearest power of 2, we get an instance of the Pinwheel Scheduling problem with density at most 1. So, the result from [9] ensures there is a schedule for this instance of the Pinwheel Scheduling problem. In Section 4, it is shown how to obtain a representation of a feasible schedule in polynomial time. Since periods are rounded down, the resulting schedule can also be used as a feasible solution for the pseudo-instance A. This concludes the proof.

Our algorithm uses the same approach as the 2-approximation by [8]. Given an instance of BGT, we create a pseudo-instance of the Pinwheel Scheduling problem by defining periods:

After specializing A with respect to {2,3}, we may want to further adjust B and C. For this, define P⊆B and Q⊆C such that

If ρ(P)+ρ(Q)=0, no further action is taken. If ρ(P)+ρ(Q)>0, we will start our normalization procedure, which considers four cases. Here, treating set X as one z means that we will reserve space in the schedule as if the jobs in set X were one z.

We define B′ and C′ to be B and C after normalization, respectively. The following theorem states that if we specialize a pseudo-instance A of PS with respect to {2,3}, and then apply normalization, we obtain a schedulable instance whenever ρ(A)≤7/12. The proof is actually the same as the one in [3], and is therefore given in the appendix.

The algorithm of Chan and Chin [3] obtains a schedulable PS-instance for any pseudo-instance A with ρ(A)≤7/12.

There is a 12/7-approximation algorithm for the discrete Bamboo Garden Trimming problem.

We like to note that the chosen approach might be able to improve upon the current guarantee, if another lower bound is used to reduce to PS. For example, Della Croce [6] observed that, if n≠1, the optimal value is at least 2h1. Hence, we could use max{2h1,∑ihi} as a lower bound.

First observe that rounding the periods as is done by the algorithm from [3] can be done in polynomial time. Here, we give an algorithm that, for instances obtained by applying the algorithm from [3], produces a representation of a feasible solution in polynomial time. For this, it is sufficient to show that such an algorithm exists for instances A with the property that pi divides pj whenever pi≤pj, and ρ(A)≤1. In [9], an algorithm for instances with this property is given. However, this algorithm runs in exponential time, since it constructs a schedule of length 2∏ipi. For instances with the aforementioned property, we can restrict ourselves to periodic schedules [9]. As said in the introduction, these can be represented by an offset time oi and a time ti between two consecutive days on which job i is scheduled, for each i. We will show that we can find these values in polynomial time.

If an instance A satisfies the property that pi divides pj whenever pi≤pj, and ρ(A)≤1, then a representation of a feasible schedule can be found in polynomial time.

Create a new instance A′j containing the jobs from Sj and set the periods to p′i=pi/p1 for i∈Sj. Clearly, ∑i1/p′i≤1 holds for this instance. Suppose there is a feasible schedule for A′j, and let σj(i,ℓ) denote the day on which job i is scheduled for the ℓth time. Now, in the original instance, schedule job i∈Sj for the ℓth time (denoted by σ(i,ℓ)) on day:

To see that this schedule is feasible, note that clients from set Sj are only scheduled on days τ for which τ≡jmodp1, and therefore there are no two clients scheduled on the same day. Furthermore, the time between two consecutive days on which a job is scheduled is exactly p1 times as long as in the schedule for B′j. Therefore instance A will have a feasible schedule if the subinstances A′j are schedulable. As the inductive hypothesis trivially holds for instances with one client, the result follows.

The approach above can be used to find ti and oi in polynomial time. Clearly, ti is equal to pi. To obtain the values of oi for all i, we repeatedly partition the instance as is done above, until only singletons are left. After partitioning, each subinstance is scaled down by a factor p1. Now, the value of oi can be found by using equation 1 recursively. Since in each step, we create at least one subset that contains only one job, this procedure will run in polynomial time. ∎

to the odd days, and the jobs in

C′ to the even days. If B′ consists of a single 2, then this job is scheduled on every odd day. Otherwise, the periods are divided by 2, the algorithm above is applied, and the resulting schedule is stretched by a factor 2. A similar algorithm works for scheduling the jobs in C′.

In this paper, we presented a 12/7-approximation algorithm for the discrete Bamboo Garden Trimming problem. This improves upon the 1.888-approximation by Della Croce [6]. The algorithm uses a reduction to the Pinwheel Scheduling problem, similar to the algorithm designed by Gasieniec et al. [8]. We also gave examples which show that the current bound is essentially the best we can hope for if we restrict ourselves to this approach.

For future research, it would be interesting to see if other approaches can improve upon the guarantee of 12/7. It might also be interesting to study lower bounds on approximability. Moreover, it would be great if one is able to prove that either the discrete Bamboo Garden Trimming problem or the Pinwheel Scheduling problem is complete for some class, e.g., PSPACE-complete.

We would like to thank Thomas Bosman for useful discussions on the computational efficiency of algorithms for the Pinwheel Scheduling problem.

Using the definitions from Section 3, we have

Hence, we only have combinations of (r,s) in