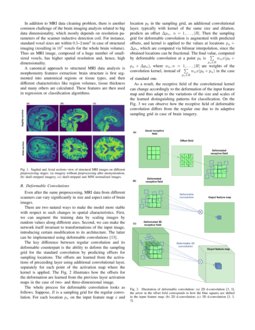 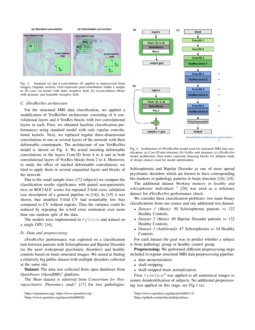 There is a need for accurate prediction and diagnostics in neurology and psychiatry. MRI is considered as one of the most powerful diagnostic instruments applicable for multiple examinations both in adults and children, see [1, 2, 3, 4].

There is a number of successful applications of convolutional neural networks (CNN) with different architectures for segmentation of MRI data. Many of these solutions are based on adapting existing approaches to analyzing 2D images for processing of three-dimensional data.

Thus, convolutional networks can be applied directly to the raw neuroimaging data without loss of model performance and over-fitting, which allows skipping the feature extraction step.

However, there is a problem: the traditional convolutional networks are very sensitive to image size, scale and spatial orientation thus require thorough pre-processing specific to a clinical application. Because different locations in the input feature maps may correspond to objects with different scales or deformation, adaptive determination of scales or receptive field sizes is desirable for certain tasks, particularly in neuroimaging.

It is known that CNNs are inherently limited to model large unpredictable transformations because of the fixed geometric structure of the sampling matrix, and restricted receptive fields.

In the present study we carried out an extensive experimental evaluation of deep CNNs both with traditional and deformable convolutions for bipolar disorder and schizophrenia diagnostics based on structural MRI data. The article has the following structure: in Section 2 we review current deep learning approaches used for MRI data analysis and their drawbacks as well as a possible solution — deformable convolutions. Here we also present the training datasets and the classification task. We describe obtained results in Section 3, provide discussion of the network performance in Section 4 and draw conclusions in Section 5.

MR noise is associated with the scanning procedure (low-level hardware artefacts such as magnetic field inhomogeneity, radiofrequency noise, surface coil artefacts and others) and signal processing (chemical shift, partial volume, etc.); as well as with the scanned patient (physiological noise such as blood flow, movements, etc.) [12].

In addition to MRI data cleaning problem, there is another common challenge of the brain imaging analysis related to big data dimensionality, which mostly depends on resolution parameters of the scanner inductive detection coil. For instance, standard voxel sizes are within 0.5–2 mm3 in case of structural imaging (resulting in 107 voxels for the whole brain volume). Thus an MRI image, composed of a huge number of small-sized voxels, has higher spatial resolution and, hence, high dimensionality.

A canonical approach to structural MRI data analysis is morphometry features extraction: brain structure is first segmented into anatomical regions or tissue types, and then different characteristics like region volumes, tissue thickness and many others are calculated. These features are then used in regression or classification algorithms.

Even after the same preprocessing, MRI data from different scanners can vary significantly in size and aspect ratio of brain images.

There are two natural ways to make the model more stable with respect to such changes in spatial characteristics. First, we can augment the training data by scaling images by random values along different axes. Second, we can make the network itself invariant to transformations of the input image, introducing certain modification to its architecture. The latter can be implemented using deformable convolutions [13].

The key difference between regular convolution and its deformable counterpart is the ability to deform the sampling grid for the standard convolution by predicting offsets for sampling locations. The offsets are learned from the activations of preceeding layer using additional convolutional layer, separately for each point of the activation map where the kernel is applied. The Fig. 2 illustrates how the offsets for the deformation are learned from the previous layer activation maps in the case of two- and three-dimensional image.

, which are computed via bilinear interpolation, since the obtained locations can be fractional. The final value, computed by deformable convolution at a point

p0 is ∑pn∈Rwnx(p0+pn+Δpn), where wn,n=1,…,|R| are weights of the convolution kernel, instead of ∑pn∈Rwnx(p0+pn) in the case of standard one.

As a result, the receptive field of the convolutional kernel can change accordingly to the deformation of the input feature map and thus adapt to the variations of the size and scales of the learned distinguishing patterns for classification. On the Fig. 3 we can observe how the receptive field of deformable convolution differs from the regular one due to its adaptive sampling grid in case of brain imagery.

Due to the small sample sizes (172 subjects) we compare the classification results significance with paired non-parametric ttest on ROC/AUC scores for repeated 5-fold cross validation (see description of a general pipeline in [14]). In [15]

it was shown, that stratified 5-fold CV had remarkably low bias compared to CV without repeats. Thus the variance could be reduced by repeating the n-fold error estimation over more than one random split of the data.

The models were implemented in PyTorch and trained on a single GPU [16].

dVoxResNet performance was explored on a classification task between patients with Schizophrenia and Bipolar Disorder (as the most widespread psychiatric disorders) and healthy controls based on brain structural images. We aimed at finding a relatively big public dataset with multiple disorders collected at the same site.

The Main dataset is retrieved from Consortium for Neuropsychiatric Phenomics study222https://www.openfmri.org/dataset/ds000030/ [17] for two pathologies: Schizophrenia and Bipolar Disorder as one of most spread psychiatric disorders which are known to have corresponding bio-markers or pathology patterns in brain structure [18, 19].

The additional dataset Working memory in healthy and schizophrenic individuals 333https://www.openfmri.org/dataset/ds000115/ [20] was used as a reference dataset for dVoxResNet performance check.

For each dataset the goal was to predict whether a subject is from pathology group or healthy control group.

First, Pydeface444https://github.com/poldracklab/pydeface was applied to all anatomical images to ensure deindentification of subjects. No additional preprocessing was applied on this stage, see Fig.1 (a).

On the third step brain images were normalized to MNI space [22], which implies standardization and alignment to common space for brain volumetric analysis during standard preprocessing protocol FreeSurfer-derived segmentations of the cortical gray-matter of Mindboggle [23] in fmriprep 666https://github.com/poldracklab/fmriprep [24] toolbox. The result of the procedure can be seen at Fig.1 (c).

After normalization, MR images were segmented in order to extract structural morphometric features (brain volumes, thicknesses, curvatures, number of vertexes, average voxel intensities within the region, etc.) which together form a feature vector.

Structural features are calculated from T1 images using default processing pipeline in Freesurfer [25] toolbox. Thus, morphometrical characterinstics (volumes, surface areas, thicknesses, etc.) are calculated for 34 cortical regions according to Desikan-Killiany Atlas and for 45 subcortical areas according to Automatic subcortical segmentation  [26] resulting in a vector of 927 features for each subject.

The Baseline performance was calculated with classification pipeline described in [27]

For Schizophrenia classification all deep neural methods outperform the Baseline classifier on morphometry features, see Table I where baseline classification AUC is 0.739 (0.086). All considered convolutional network architectures outperform the baseline on imagery without normalization. Optimized dVoxResNet shows statistically significant performance increase according to the cross-validation scores.

It can be seen that insertion of deformable convolution layers instead of traditional ones in VoxResNet architecture yield statistically significant improvement in classification accuracy for both schizophrenia and bipolar disorder classification tasks. Moreover, d-convolutions perform well on MRI data without preprocessing and skull-stripping. Our experiments with dVoxResNet architecture also revealed decrease of classification accuracy of schizophrenia and bipolar disorder with increaing the level of preprocessing. This could potentially arise from the fact that data cleaning and preprocessing removes informative parts of data. Given that typical preprocessing pipeline for structural imagery is computationally expensive and takes up to 15 min per subject for skull-stripping and up to 5 hours per subject for normalization in FreeSurfer (on a single CPU core), applying d-convolutions seems beneficial and the need for thourough MR images preprocessing for classification with convolutional networks should be investigated.

Insertion of deformable convolution layers in VoxResNet architecture yield statistically significant improvement in classification accuracy for imagery without preprocessing and skull-stripping of images. However, they do not improve classification performance on preprocessed data. This can be possibly explained by the fact that MNI normalization significantly reduces variability in small deformations of the brain image and deformable convolutions lack information for training the meaningful offset. But at the same time the number of trainable parameters increases, making the model with deformable convolutions less stable to overfitting.

In case of disease recognition based on unprocessed or skull-stripped data, the use of deformable convolutions in only one layer or block gives only a slight quality improvement, and thus is potentially not enough to provide the network with the necessary deformation modelling capability. However, the use of stacked deformable convolutions in several sequential layers already allows to obtain the effect of a statistically significant improvement of classification performance. These results are also consistent with the observations for deformation modelling with 2D deformable ConvNets [28].

We also applied deformable ConvNets for schizophrenia recognition problem on Dataset 3 (Additional) of smaller size, see Table IV in Appendix. We tested both training the model from scratch on this small sample and transferring and fine-tuning the pre-trained weights for Schizophrenia versus Healthy control classification from the main dataset. Yet it does not show any significant classification improvement, which can be due to small sample size causing in poor model generalizability.

The current study has several limitations mostly resulting from the computational cost of deformable convolutions and 3D networks on MRI volumes. The d-convolutions are to be used with the data augmentation yet it more computationally expensive.

The use of convolutions with bigger than [3, 3, 3] kernels also was restricted due to GPU memory capacity.

Deformable convolution tries to learn how to predict the sampling locations in a way to make filters invariant to small deformations. Thus, augmentation of brain imagery data using small scales and affine transformations can add more variability and provide additional information for training networks with deformable convolutional modules. It could also be potentially helpful to get more stable results by increasing the training sample size. However, applying such augmentation is more computationally expensive.

The use of deformable convolutions with bigger than 3×3×3 kernels requires extended GPU memory capacity. Prediction of the offsets for each unit of the convolutional kernel of size k at each point of the input feature map assumes generation of the additional 3×k3 activation maps.

D-convolutions now explored for MRI classification problems were originally proposed for image segmentation tasks, and can be further utilized for brain segmentation as well.

The additional study would be a great of interest both for potential accuracy improvement and neural networks results interpretation.

The usage of deformable convolution layers yields statistically significant improvement in classification performance for unprocessed and skull-stripped brain images. Yet it was not effective for normalized brain images, which could potentially arise from the fact that data normalization removes informative parts of data and reduces variability. We showed that deformable convolutions could be competitive analogues of standard ones, and their usage is reasonable despite of the high computational cost. 3D d-convolutions significantly outperform standard ones in binary classification tasks and are effective for unprocessed 3D images.

The study was supported by the Russian Science Foundation under Grant 19-41-04109.