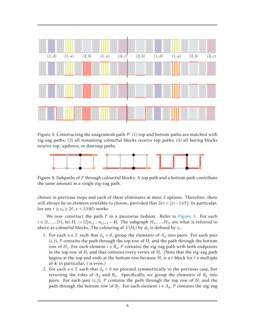 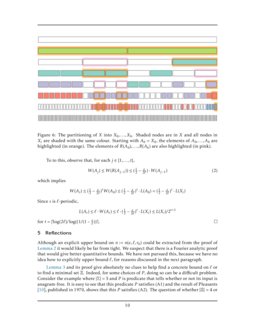 For a graph family G, \afcn(G):=max{\afcn(G):G∈G} or \afcn(G):=∞ if the maximum is undefined. The results on anagram-free strings discussed in the preceding paragraph can be interpreted in terms of \afcn(P) where P is the family of all paths. Slightly more complicated than paths are trees. Wilson and Wood [13] showed that \afcn(T)=∞ for the family T of trees and Kamčev et al. [6] showed that \afcn(T2)=∞ even for the family T2 of binary trees.

One positive result in this context is that of Wilson and Wood [13], who showed that every tree T of pathwidth p has \afcn(T)≤4p+1. Since trees are graphs of treewidth 1 it is natural to ask if this result can be extended to show that every graph G of treewidth t and pathwidth p has \afcn(G)≤f(t,p) for some f:\N2→\N. Carmi et al. [2] showed that such a generalization is not possible for any t≥3 by giving examples of n-vertex graph of pathwidth 3 (and treewidth 3) with \afcn(G)∈Ω(logn). The obvious remaining gap left by these two works is graphs of treewidth 2. Our main result is to show that Gn, the 2×n square grid has \afcn(Gn)∈ωn(1). Since Gn has pathwidth 2, we have:

Wilson [11, Section 7.1] conjectured that \afcn(Gn)∈ωn(1), so this work confirms this conjecture. Prior to the current work, it was not even known if the family of n×n square grids had anagram-free colourings using a constant number of colours.

In a larger context, this lower bound gives more evidence that, except for a few special cases (paths [4, 10, 7], trees of bounded pathwidth [13], and highly subdivided graphs [12]), the qualitative behaviour of anagram-free chromatic number is not much different than that of treedepth/centered colouring [9]. Very roughly: For most graph classes, every graph in the class has an anagram-free colouring using a bounded number of colors precisely when every graph in the class has a colouring using a bounded number of colours in which every path contains a colour that appears only once in the path.

The remainder of this paper is organized as follows: Section 2 gives some definitions and states a key lemma that shows that, under a certain periodicity condition, every sufficiently long string contains a substring that is ϵ-close to being anagramish. In Section 3 we prove Section 1. In Section 4 we prove the key lemma. Section 5 concludes with some final remarks about the (non-)constructiveness of our proof technique.

A string s:=s1,…,sn is ℓ-periodic if each length-ℓ substring of s contains every character in Σ:=⋃ni=1si. We make use of the following lemma, which states that every sufficiently long ℓ-periodic string contains a long substring that is ϵ-close to being anagramish.

The proof of Section 2 is deferred to Section 4. We now give some intuition as to how it is used. The process of checking if a string is anagramish is often viewed as finding common terms in the first and second halves and crossing them both out. If this results in a complete cancellation of all terms, then the string is an anagram. Section 2 tells us that we can always find a long substring s where, after exhaustive cancellation, only an ϵ-fraction of the original terms remain. Informally, the substring s is ϵ-close to being anagramish.

Section 2 says that, if up to ϵr terms in each half of s were each allowed to cancel two terms each in the other half of s, then it would be possible to complete the cancellation process. To achieve this type of one-versus-two cancellation in our setting, we decompose our coloured pathwidth-2 graph into pieces of constant size. The vertices in each piece can be covered with one path or partitioned into two paths. In this way an occurrence Hz of a particular coloured piece in one half can be matched with two like-coloured pieces Hx and Hy in the other half. We construct a single path P that contains all vertices in Hz and only half the vertices in each of Hx and Hy. In this way, the colours of vertices P∩Hz can cancel the colours of the vertices in P∩(Hx∪Hy).

Since Section 2 requires that the string s be ℓ-periodic, the following lemma will be helpful in obtaining strings that can be used with Section 2.

Take Ξ to be a minimal subset of Σ such that there exists s∈Ξn with P(s)=1, for each n∈\N. Such a Ξ exists by (A2) and the fact that Σ is finite. By definition, Ξ satisfies (C1) so we need only show that it also satisifies (C2). If |Ξ|=1 then we are done since every string over a 1-character alphabet is 1-periodic.

Our strategy will be to break Gn up into small pieces using 4-blocks that all have the same colouring. Observe that any string s:=ϕ0,…,ϕb−1∈(Φc,4)b defines a vertex c-colouring ϕs of the graph G4b where ϕs[4j:4j+4]:=ϕj for each j∈{0,…,b−1}. Indeed, this is a bijection between c-colourings of G4b and strings in Φbc,4.

See Figure 2. In words, Gns is decomposed into blocks each of whose length is a multiple of 4. There are colourful blocks of lengths 4k1,4k2,…,4k|s|≤4ℓ and these are interleaved with boring blocks, each of length 4. The colourful blocks have their vertex colours determined by s. The boring blocks are all coloured the same way, by ϕ∗.

Define the function P:Σ∗→{0,1} so that P(s):=1 if ϕs is an anagram-free colouring of Gns and P(s):=0 otherwise. Observe that any substring s′ of s defines a colouring ϕs′ of Gns′ that appears in the colouring ϕs of Gns. Therefore P satisfies property (A1) of Section 2. Furthermore, if \afcn(Gn)≤c for each n∈\N, then Section 3 implies that there exists a string s∈Σb with P(s)=1 for each b∈\N. Therefore P satisfies property (A2) of Section 2. Therefore, Section 2 implies the following result:

By Section 3, for each k∈\N there exists an ℓ-periodic string s′∈Σk such that ϕs′ is an anagram-free vertex colouring of Gns′. Applying Section 2 to s′ proves the existence of the desired string s. ∎

Section 3 shows the existence of colourings of Gn for arbitrarily large values of n that are defined by strings that are ϵ-close to being anagramish. The last step, done in the next lemma, is to show that there is enough flexibility when constructing a path in Gn that we can find a path that has an anagramish colour sequence.

Let A:=⋃a∈ΣAa and B:=⋃a∈ΣBa. The sets Aa and Ba are chosen so that they satisfy the following global independence constraint: There is no pair i,j∈A∪B such that i−j=1. To see that this is possible, first observe that, because r is not in A or B we need only concern ourselves with pairs where both i,j∈{1,…,r−1} or pairs where both i,j∈{r+1,…,2r−1}. Thus, we can choose the elements of Aa, for each a∈Σ and then independently choose the elements of Ba, for each a∈Σ.

We show how to choose the elements of Aa for each a∈Σ. The same method works for choosing the elements in Ba. Observe that, because s is ℓ-periodic, |{i∈{1,…,r−1}:si=a}|≥⌊(r−1)/ℓ⌋ for each a∈Σ. This allows us to greedily choose the elements in Aa for each a∈Σ. At each step we simply avoid choosing i if i−1 or i+1 have already been chosen in some previous step. At any step in the process, at most ϵr elements have already been chosen in previous steps and each of these eliminates at most 2 options. Therefore, there will always be an element available to choose, provided that 2ϵr<⌊(r−1)/ℓ⌋. In particular, for any r≥r0≥2ℓ, ϵ<1/(4ℓ) works.

Finally, by construction, each pair of top and bottom blocks in H1,…,Hr−1 contributes exactly the same amount as a single matching zig-zag block in Hr+1,…,H2r−1. Specifically, if x,y∈Aa, and z∈Ba, Hx is a top block, Hy is a bottom block and Hz is a zig-zag block, then the contributions of Px and Py to ρ cancels out the contribution of Pz. After doing this cancellation exhaustively, all that remains are top blocks, which also cancel each other perfectly. This completes the proof. ∎

For completeness, we wrap up the proof of Section 1:

Section 3 shows that, for any string s1,…,s2r∈Σ∗ with r≥r0 and τ(s)≤ϵr, the graph Gns contain a path that is anagramish under ϕs. This is certainly a contradiction to the fact that ϕs is anagram-free colouring of Gns. We therefore conclude that, for every c∈\N there exists an n∈N such that \afcn(Gn)>c. ∎

All that remains is to prove Section 2, which we do now.

Define an even-length string t over the alphabet Σ to be a-unbalanced if τa(t)>ϵ|t|/ℓ and a-balanced otherwise. If t is a-balanced for each a∈Σ then t is balanced. Observe that, if t is balanced then τ(t)≤ϵ|t|. A string is everywhere unbalanced if it contains no balanced substring of length r≥r0. Our goal therefore is to show that there is an upper bound n:=n(ℓ,ϵ,r0) on the length of any ℓ-periodic everywhere unbalanced string.

Let h be a positive integer (that determines n and whose value will be discussed later), and let n:=r02h. Let s be an ℓ-periodic everywhere unbalanced string of length n over the alphabet Σ. The fact that s is ℓ-periodic, implies that the |Σ|≤ℓ. Assume, without loss of generality, that r0 is a multiple of ℓ.

Consider the complete binary tree T of height h whose leaves, in order, are length-r0 strings whose concatenation is s and for which each internal node is the substring obtained by concatenating the node’s left and right child. Note that for each v∈V(T) and each a∈Σ, the fact that s is ℓ-periodic and r0 is multiple of ℓ implies that \hista(v)≥|v|/ℓ.

For each non-leaf node v of T, let R(v) denote a child of v such that W(R(v))≤12⋅W(v). (It is helpful to think of T as being ordered so that each right child y with sibling x has W(y)≤W(x).) For a non-leaf node v∈X the fact that v is a∗-unbalanced implies that

For each i∈{0,…,h}, let Xi⊆X denote the set of nodes v∈X for which the path from the root of T to v contains exactly i nodes in X, excluding v. See Figure 6. Observe that, since each node in Xi has an ancestor in Xi−1,

Although an explicit upper bound on n:=n(ϵ,ℓ,r0) could be extracted from the proof of Section 2 it would likely be far from tight. We suspect that there is a Fourier analytic proof that would give better quantitative bounds. We have not pursued this, because we have no idea how to explicitly upper bound ℓ, for reasons discussed in the next paragraph.

Section 2 and its proof give absolutely no clues to help find a concrete bound on ℓ or to find a minimal set Ξ. Indeed, for some choices of P, doing so can be a difficult problem. Consider the example where |Σ|=5 and P is predicate that tells whether or not its input is anagram-free. It is easy to see that this predicate P satisfies (A1) and the result of Pleasants [10], published in 1970, shows that this P satisfies (A2). The question of whether |Ξ|=4 or |Ξ|=5 is then the question of determining whether there exist arbitrarily long anagram-free strings on an alphabet of size 4. This was the open problem posed by Erdős [3] in 1961 and again by Brown [1] in 1971 and not resolved until 1992 when Keränen [7, 8] showed that the answer, in this case, is that |Ξ|=4. However, if this were not the case, then determining ℓ would be the question of determining the length of the longest anagram-free string over an alphabet of size 4.

Our proof uses Section 2 twice and each application uses a predicate P that is considerably more complicated than asking if the input string is anagram-free. It seems unlikely that we will obtain concrete bounds upper bounds on ℓ as a function of c except, possibly, through the use of computer search. The resulting value ℓ is used in the application of Section 2 and also within the proof of Section 3.