Image retrieval utilizes image descriptors to retrieve the most similar images to a given query image. Convolutional neural network (CNN) is becoming the dominant approach to extract image descriptors for image retrieval. For low-power hardware implementation of image retrieval, the drawback of CNN-based feature descriptor is that it requires hundreds of megabytes of storage. To address this problem, this paper applies deep model quantization and compression to CNN in ASIC chip for image retrieval. It is demonstrated that the CNN-based features descriptor can be extracted using as few as 2-bit weights quantization to deliver a similar performance as floating-point model for image retrieval. In addition, to implement CNN in ASIC, especially for large scale images, the limited buffer size of chips should be considered. To retrieve large scale images, we propose an improved pooling strategy, region nested invariance pooling (RNIP), which uses cropped sub-images for CNN. Testing results on chip show that integrating RNIP with the proposed 2-bit CNN model compression approach is capable of retrieving large scale images. 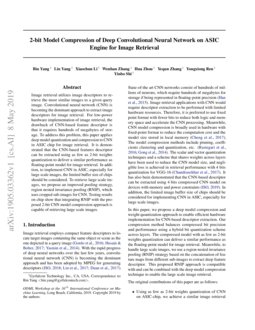 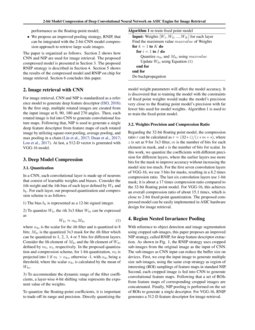 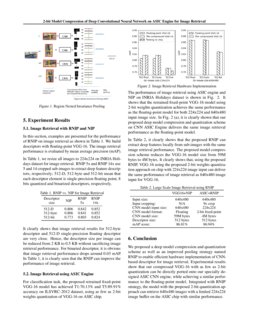 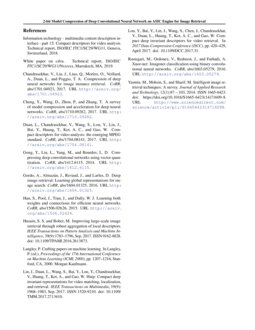 State-of-the art CNN networks consist of hundreds of millions of neurons, which require hundreds of megabytes for storage if being represented in floating-point precision

. The scalar and vector quantization techniques and a scheme that shares weights across layers have been used to reduce the CNN model size, and negligible loss is achieved in retrieval performance with 4 bits quantization for VGG-16

(Chandrasekhar et al., 2017). It has also been demonstrated that the CNN-based descriptor can be extracted using 4 bits compressed CNN model on devices with memory and power constraints (ISO, 2019). In addition, the limited image buffer size of chips should be considered for implementing CNN in ASIC, especially for large scale images.

In this paper, we propose a deep model compression and weight quantization approach to enable efficient hardware implementation for CNN-based descriptor extraction. Our compression method balances compressed bit precision and performance using a hybrid bit quantization scheme across layers. The compressed model with as few as 2-bit weights quantization can deliver a similar performance as the floating-point model for image retrieval. Meanwhile, to handle large scale images, we use a region nested invariance pooling (RNIP) strategy based on the concatenation of feature maps from different sub-images to extract deep feature descriptor. This proposed RNIP approach is compatible with and can be combined with the deep model compression technique to enable the large scale image retrieval.

The original contributions of this paper are as follows:

For image retrieval, CNN and NIP is standardized as a reference model to generate deep feature descriptor (ISO, 2018)

In a CNN, each convolutional layer is made up of neurons that consist of learnable weights and biases. Consider the kth weight and the kth bias of each layer defined by Wk and bk. For each layer, our proposed quantization and compression scheme is as follows:

1) The bias bk is represented as a 12-bit signed integer.

2) To quantize Wk, the ith 3x3 filter Wki can be expressed as

where αki is the scalar for the ith filter and is quantized to 8 bits; Mki is the quantized 3x3 mask for the ith filter which can be quantized to 1, 2, 3, 4 or 5 bits for different layers. Consider the lth element of Mki and the lth element of Wki defined by ml, wl, respectively. In the proposed quantization and compression scheme, for 1-bit quantization, ml is projected into 1 if wl>αki, otherwise -1, with αki being a threshold, where the scalar αki is calculated by the mean of Wki.

3) To accommodate the dynamic range of the filter coefficients, a layer-wise 4-bit shifting value represents the exponent value of the weights.

To quantize the floating-point coefficients, it is important to trade-off its range and precision. Directly quantizing the model weight parameters will affect the model accuracy. It is discovered that re-training the model with the constraints of fixed point weights would make the model’s precision very close to the floating point model’s precision with far fewer bits used for model weights. Algorithm 1 is used to re-train the fixed-point model.

Regarding the 32-bit floating point model, the compression ratio r can be calculated as r=(32∗z)/(z∗m+s), where z is set as 9 for 3x3 filter, m is the number of bits for each element in mask, and s is the number of bits for scalar. In this work, we quantize the coefficients with different precision for different layers, where the earlier layers use more bits for the mask to improve accuracy without increasing the model size too much. For the first seven convolution layers of VGG-16, we use 3 bits for masks, resulting in a 8.2 times compression ratio. The last six convolution layers use 1-bit mask; it is about a 17 times compression ratio compared to the 32-bit floating point model. For VGG-16, this achieves an overall compression ratio of about 15.1 times, which is close to 2-bit fixed point quantization. The proposed compressed model can be easily implemented in ASIC hardware design for image retrieval.

With reference to object detection and image segmentation using cropped sub-images, this paper proposes an improved NIP strategy, called RNIP, for deep feature descriptor extraction. As shown in Fig. 1, the RNIP strategy uses cropped sub-images from the original image as the input of CNN. The sub-images as CNN input can reduce the buffer size on devices. First, we crop the input image to generate multiple size sub-images, using the same crop strategy as region of interesting (ROI) samplings of feature maps in standard NIP. Second, each cropped image is fed into CNN to generate convolutional feature maps. Following that a set of ROIs from feature maps of corresponding cropped images are concatenated. Finally, NIP pooling is performed on the set of ROIs to generate a single descriptor. For VGG-16, RNIP generates a 512-D feature descriptor for image retrieval.

5.1 Image Retrieval with RNIP and NIP

For classification task, the proposed retrained fixed-point VGG-16 model has achieved T1:70.13% and T5:89.91% accuracy on ILSVRC-2012 dataset, using as few as 2-bit weights quantization of VGG-16 on ASIC chip.

The performance of image retrieval using ASIC engine and NIP on INRIA Holidays dataset is shown in Fig. 2. It shows that the retrained fixed-point VGG-16 model using 2-bit weights quantization achieves the same performance as the floating-point model for both 224x224 and 640x480 input image size. In Fig. 2 (a), it is clearly shown that our proposed deep model compression and quantization scheme on CNN ASIC Engine delivers the same image retrieval performance as the floating-point model.

We proposed a deep model compression and quantization scheme as well as an improved pooling strategy named RNIP to enable efficient hardware implementation of CNN-based descriptor for image retrieval. Experimental results show that our compressed VGG-16 with as few as 2-bit quantization can be directly ported onto our specially designed ASIC CNN engine, while achieving a similar performance to the floating-point model. Integrated with RNIP strategy, the model with the proposed 2-bit quantization approach can retrieve 640x480 images with a limited 224x224 image buffer on the ASIC chip with similar performance.