In this paper, we focus on the multiuser massive multiple-input single-output (MISO) downlink with low-cost 1-bit digital-to-analog converters (DACs) for PSK modulation, and propose a low-complexity refinement process that is applicable to any existing 1-bit precoding approaches based on the constructive interference (CI) formulation. With the decomposition of the signals along the detection thresholds, we first formulate a simple symbol-scaling method as the performance metric. The low-complexity refinement approach is subsequently introduced, where we aim to improve the introduced symbol-scaling performance metric by modifying the transmit signal on one antenna at a time. Numerical results validate the effectiveness of the proposed refinement method on existing approaches for massive MIMO with 1-bit DACs, and the performance improvements are most significant for the low-complexity quantized zero-forcing (ZF) method. 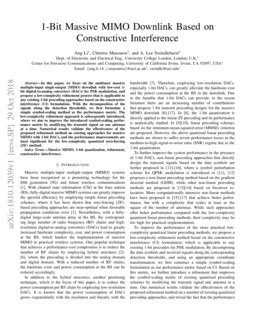 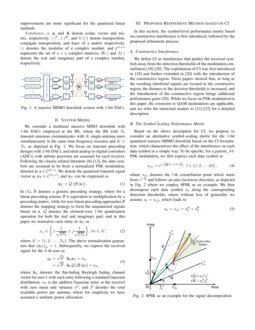 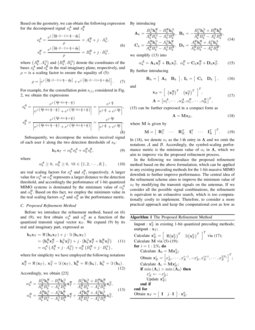 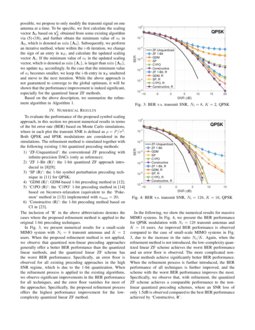 In this paper, we consider the one-bit precoding problem for the multius...
zheyu-wu, et al. ∙

This study proposes the construction of a transmit signal for large-scal...
Sungyeal Park, et al. ∙

Massive multiple-input multiple-output (MIMO) systems have been recognized as a promising technology for the fifth generation (5G) and future wireless communications [1]. With channel state information (CSI) at the base station (BS), fully-digital massive MIMO systems can greatly improve the spectral efficiency by employing simple linear precoding schemes, where it has been shown that zero-forcing (ZF)-based precoding approaches are near-optimal when favorable propagation conditions exist [1]. Nevertheless, with a fully-digital large-scale antenna array at the BS, the corresponding large number of radio frequency (RF) chains and high-resolution digital-to-analog converters (DACs) lead to greatly increased hardware complexity, cost, and power consumption at the BS, which hinders the implementation of massive MIMO in practical wireless systems. One popular technique that achieves a performance-cost compromise is to reduce the number of RF chains by employing hybrid structures [2]-[6], where the precoding is divided into the analog domain and digital domain. With a reduced number of RF chains, the hardware costs and power consumption at the BS can be reduced accordingly.

In addition to the hybrid structures, another promising technique, which is the focus of this paper, is to reduce the power consumption per RF chain by employing low-resolution DACs. It is known that the power consumption of DACs grows exponentially with the resolution and linearly with the bandwidth [7]. Therefore, employing low-resolution DACs, especially 1-bit DACs, can greatly alleviate the hardware cost and the power consumption at the BS in the downlink. Due to the benefits that 1-bit DACs can provide, in the recent literature there are an increasing number of contributions that propose 1-bit transmit precoding designs for the massive MIMO downlink [8]-[17]. In [8], the 1-bit quantization is directly applied to the linear ZF precoding and its performance is analytically studied. In [9][10], linear precoding schemes based on the minimum-mean-squared error (MMSE) criterion are proposed. However, the above quantized linear precoding methods are shown to suffer severe performance losses in the medium-to-high signal-to-noise ratio (SNR) regime due to the 1-bit quantization.

To improve the performance of the more practical low-complexity quantized linear precoding methods, we propose a low-complexity refinement method based on the constructive interference (CI) formulation, which is applicable to any existing 1-bit precoders for PSK modulation. By decomposing the data symbols and received signals along the corresponding detection thresholds, and using an appropriate coordinate transformation, we first construct a simple symbol-scaling formulation as our performance metric based on CI. Based on this metric, we further introduce a refinement that improves the symbol-scaling metric of existing quantized precoding schemes by modifying the transmit signal one antenna at a time. Our numerical results validate the effectiveness of the proposed refinement method on a number of existing quantized precoding approaches, and reveal the fact that the performance improvements are more significant for the quantized linear methods.

We consider a multiuser massive MISO downlink with 1-bit DACs employed at the BS, where the BS with Nt transmit antennas communicates with K single-antenna users simultaneously in the same time-frequency resource and K≤Nt, as depicted in Fig. 1. We focus on transmit precoding designs with 1-bit DACs, and ideal analog-to-digital converters (ADCs) with infinite precision are assumed for each receiver. Following the closely-related literature [8]-[12], the data symbols are assumed to be from a normalized PSK modulation, denoted as s∈CK×1. We denote the quantized transmit signal vector as xT∈CNt×1, and xT can be expressed as

where N={1,2,⋯,Nt}. The above normalization guarantees that ∥xT∥F=1. Subsequently, we express the received signal for the k-th user as

with each entry following a standard Gaussian distribution,

σ2, and P denotes the total available power per antenna, where for simplicity we have assumed a uniform power allocation.

In this section, the symbol-level performance metric based on constructive interference is first introduced, followed by the proposed refinement process.

We define CI as interference that pushes the received symbols away from the detection thresholds of the modulation constellation [18]-[20]. The exploitation of CI was first introduced in [18] and further extended in [20] with the introduction of the constructive region. These papers showed that, as long as the resulting interfered signals are located in the constructive region, the distance to the decision thresholds is increased, and the introduction of the constructive region brings additional performance gains [20]. While we focus on PSK modulation in this paper, the extension to QAM modulations are applicable, and we refer the interested readers to [21]-[22] for a detailed description.

Based on the above description for CI, we propose to consider an alternative symbol-scaling metric for the 1-bit quantized massive MIMO downlink based on the CI formulation, which characterizes the effect of the interference on each data symbol in a simple way. To be specific, for a generic M-PSK modulation, we first express each data symbol as

where s(l) denotes the l-th constellation point which starts from ej⋅π4 and follows an anti-clockwise direction, as depicted in Fig. 2 where we employ 8PSK as an example. We then decompose each data symbol sk along the corresponding detection thresholds, where without loss of generality we assume sk=s(l), which leads to

Based on the geometry, we can obtain the following expression for the decomposed signal sAk and sBk

where (ARk,AIk) and (BRk,BIk) denote the coordinates of the bases sAk and sBk in the real-imaginary plane, respectively, and ρ= is a scaling factor to ensure the equality of (5):

For example, for the constellation point s(1) considered in Fig. 2, we obtain the expressions

Subsequently, we decompose the noiseless received signal of each user k along the two detection thresholds of sk:

are real scaling factors for sAk and sBk, respectively. A larger value for αAk or αBk represents a larger distance to the detection threshold, and accordingly the performance of 1-bit quantized MIMO systems is dominated by the minimum value of αAk and αBk. Based on this fact, we employ the minimum value in the real scaling factors αAk and αBk as the performance metric.

Before we introduce the refinement method, based on (6) and (9), we first obtain αAk and αBk as a function of the quantized transmit signal vector xT. We expand (9) by its real and imaginary part, expressed as

where for simplicity we have employed the following notations

(15) can be further expressed in a compact form as

where M is given by

In (18), we denote αl as the l-th entry in Λ and we omit the notations A and B. Accordingly, the symbol-scaling performance metric is the minimum value of αl in Λ, which we aim to improve via the proposed refinement process.

In the following we introduce the proposed refinement method based on the above formulation, which can be applied to any existing precoding methods for the 1-bit massive MIMO downlink to further improve performance. The central idea of the refinement scheme aims to improve the minimum value of αl by modifying the transmit signals on the antennas. If we consider all the possible signal combinations, the refinement is equivalent to an exhaustive search, which is too computationally costly to implement. Therefore, to consider a more practical approach and keep the computational cost as low as possible, we propose to only modify the transmit signal on one antenna at a time. To be specific, we first calculate the scaling vector Λ0 based on x0E obtained from some existing algorithm via (5)-(18), and further obtain the minimum value of αl in Λ0, which is denoted as min{Λ0}. Subsequently, we perform an iterative method, where within the i-th iteration, we change the sign of an entry in xE, and calculate the updated scaling vector Λi. If the minimum value of αl in the updated scaling vector, which is denoted as min{Λi}, is larger than min{Λ0}, we update xE accordingly. In the case that the minimum value of αl becomes smaller, we keep the i-th entry in xE unaltered and move to the next iteration. While the above approach is not guaranteed to converge to the global optimum, it will be shown that the performance improvement is indeed significant, especially for the quantized linear ZF methods.

Based on the above description, we summarize the refinement algorithm in Algorithm 1.

To evaluate the performance of the proposed symbol scaling approach, in this section we present numerical results in terms of the bit error rate (BER) based on Monte Carlo simulations, where in each plot the transmit SNR is defined as ρ=P/Pσ2σ2. Both QPSK and 8PSK modulations are considered in the simulations. The refinement method is simulated together with the following existing 1-bit quantized precoding methods:

The inclusion of ‘R’ in the above abbreviations denotes the cases where the proposed refinement method is applied to the original 1-bit precoding techniques.

In Fig. 3, we present numerical results for a small-scale MIMO system with Nt=8 transmit antennas and K=2 users. When the proposed refinement method is not applied, we observe that quantized non-linear precoding approaches generally offer a better BER performance than the quantized linear methods, and the quantized linear ZF scheme has the worst BER performance. Specifically, an error floor is observed for all existing precoding approaches in the high SNR regime, which is due to the 1-bit quantization. When the refinement process is applied to the existing algorithms, we observe significant improvements in the BER performance for all techniques, and the error floor vanishes for most of the approaches. Specifically, the proposed refinement process offers the highest performance improvement for the low-complexity quantized linear ZF method.

Considering the complexity, the quantized linear ZF method with the refinement process achieves the best performance-complexity tradeoff, and is therefore the most promising technique in a practical 1-bit massive MIMO system.

In this paper, a low-complexity refinement method is proposed for the massive MIMO downlink with 1-bit DACs, which is applicable to any existing quantized precoding methods with PSK modulations. By first formulating the symbol-scaling performance metric based on constructive interference, the refinement process modifies the transmit signal on one antenna at a time and further improves this performance metric with a low computational cost. Numerical results have shown that the refinement offers additional performance improvements for existing schemes, especially for the low-complexity quantized linear ZF method.

This work was supported by the Royal Academy of Engineering, U.K., the Engineering and Physical Sciences Research Council (EPSRC) project EP/M014150/1, the China Scholarship Council (CSC), and the U.S. National Science Foundation under grant CCF-1703635.